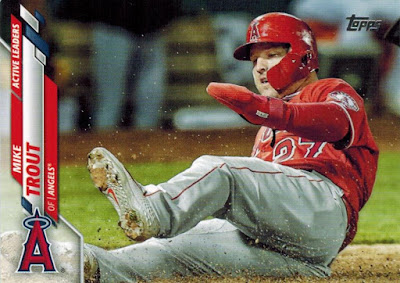 My deepest sympathies are with the unfortunate souls who were put in charge of piecing together Topps Update this year.
When I picture the process in my head, I see absolute insanity at Topps HQ: papers flying, people scrambling, voices screaming. Maybe it wasn't quite that dramatic, but I have to imagine it was a panic from the get-go. Making 2020 Update was, in many ways, an impossible task. How do you truly "update" a season that didn't start until late July? How can you make All-Star cards without an All-Star game? And if there's nothing to update, and no All-Star cards, how can you make Topps Update?
In short: how can you properly document the three-month insanity that we agreed to call a baseball season? 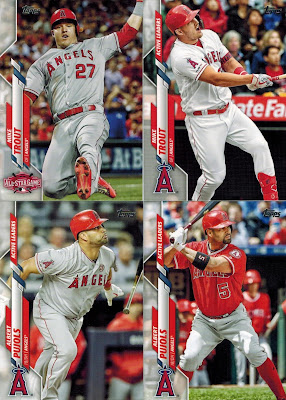 The solution, at least in part, isn't much of a stretch from a lot of what Topps does these days -- ruthlessly bloat the checklist.
As I've said before, Topps Update Release Day is always circled on my calendar, even if, admittedly, the set has isn't really what it once was. I still like Update, and even with all the craziness this year, I was still thrilled to open some late last week. Between a few spare packs Dad found for me, and a freshly-stocked display that somehow went untouched by the pack hoarders at my local Target, I got my fill of 2020 Update.
But while the packs were fun, as Update always is for me, I couldn't help wondering what the point of this set truly was. Update seems to go to press sometime around mid-summer...and there wasn't even a baseball season going on then in 2020. With nothing to update, Topps just seemed to shove as many cards as possible into this year's set without any thought as to whether they should exist or not.
Case in point: my packs yielded three of the four Mike Trout base cards in the 300-card checklist, and two of the FIVE(!) Albert Pujols cards -- why in god's name does Albert Pujols (or anyone) have five cards in the same set?! 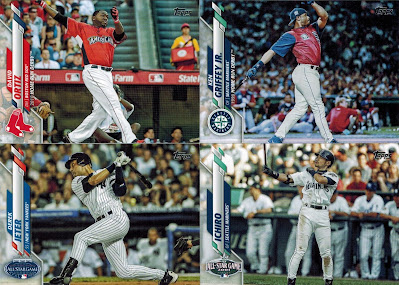 I understand a lot of these weird decisions had to be made at the eleventh hour, and contrary to what I've heard from most other collectors, I actually think these "replacement" All-Star cards were a good idea in a pinch.
It's a bit jarring to see past greats on the 2020 base design, but I kinda like the concept of reflecting on past All-Star Games in the absence of a true Midsummer Classic this year -- granted, they feature the same crop of a dozen legends we see in every set these days (Jeter, Griffey, et al), but I'll never turn down a new Ichiro card! 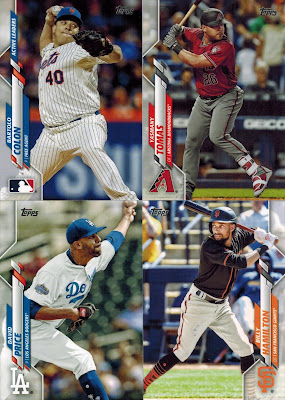 But a lot of what made it into Topps Update this year is just...weird.
David Price and Billy Hamilton both have zero-year cards, and while I love them for that, I'll be the first to admit they probably shouldn't have been included in the first place. If Topps had time to make substitutes for the All-Star cards, then I have to imagine these could've been scrapped. David Price opted out of the 2020 season and never played for the Dodgers. Billy Hamilton, on the other hand, actually played for two other teams this year (Mets, Cubs), but is still featured with the Giants, who traded him before the season started.
Yasmany Tomas appeared in four games with the Diamondbacks in 2019, and exactly zero in 2020...yet here he is in Topps Update --  and the coup de grace of Update zaniness has to be that Bartolo Colon, the first card I've ever seen that lists a player as a free agent (not to mention that calling him "active" is a bit of a stretch). 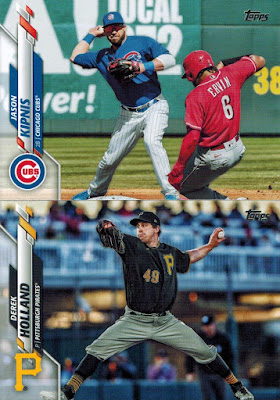 There's only a handful of cards that genuinely feel like they belong in an Update set -- I'm talking guys like Jason Kipnis and Derek Holland who've changed teams since their last appearance in a Flagship checklist, and thus in need of updating.
In hindsight, I wouldn't have minded if Topps made this an online-only release and/or issued it as a smaller 100ish-card box set or something, similar to what they did in the late '80s/early '90s -- seems like a better option than making five Albert Pujols cards. 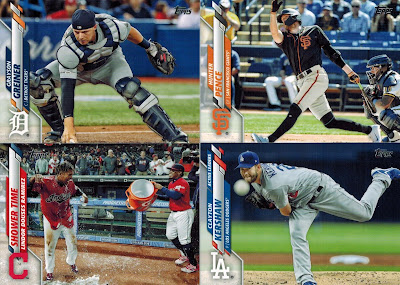 Despite the insanity, Topps did manage to sneak a few fine shots into 2020 Update, as evidenced here. 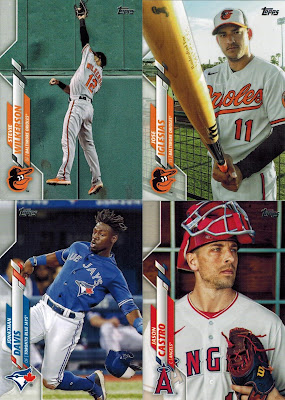 Topps was also forced to use a fair amount of posed shots here (gasp!), which I'm having trouble remembering the last time I saw those in a Flagship set. 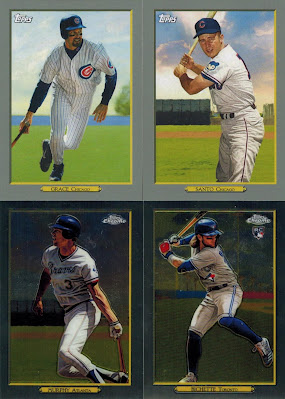 It's never a good thing when the inserts are more exciting than the base cards in the packs I buy, but I guess that's bound to happen when Topps lets Mark Grace and Ron Santo make rare cameos in a modern set(!). 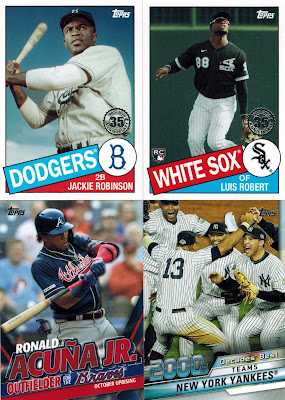 More miscellaneous inserts -- including a Luis Robert from Dad's packs I was sure happy to get, because I don't even wanna look at what his cards are going for right now (thanks, flippers!). 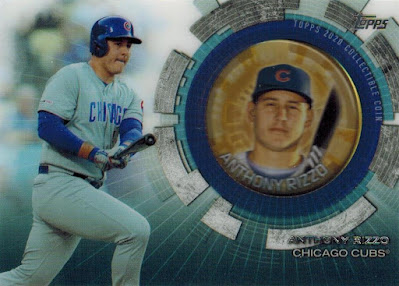 Dad managed to snag an Update blaster for me, and as luck would have it, he pulled probably the only one of these weird blaster-exclusive coin cards I'd actually care about owning with this Rizzo here.
I guess I expected 2020 Update was going to be a strange state of affairs, but I just didn't think it was gonna be this weird -- which, now that I think of it, is kinda how I'd describe 2020 as a whole.
Posted by Nick at 5:30 PM

It may be just the flipper vultures buying them,but since they came out,at my vendor gigs...most of em are gone before Im done stocking!

Got ya a couple more packs today!

As I've already said, the set's a disaster. I can't even get myself to seek it out. The Dodgers team set is abysmal and outside of some of the posed shots that Topps was forced to make, I can't find anything enjoyable in it.

This is a set that should not have been made. I know Topps needs to make money so that wasn't going to happen but, even bumping it down to a 132-card set -- like what it was when I was a teenager -- makes much more sense than this.

I am going to be mad every time I look back on my 2020 Dodgers binder and see TWO Tyler White cards. Flippers: Have at it.

Five Pujols cards in a 300 card set? That just silly.

This is hands down the worst flagship set Topps has ever released. I'm glad they paired down the Turkey Red checklist to 50 cards this time, because I doubt I'm going to buy any more blasters beyond the two that I bought and didn't feel like blogging about. I could see it being repack fodder in the future if repacks continue to be a thing.

This would have been a perfect time to make cards for your "all-forgotten team" short term stops which never got a card.

Oh, well. I did order a blaster from Wal-Mart, because it was available, and I'll be opening it soon. I guess having a couple of Pujols cards wouldn't be bad.

I don’t see why they didn’t just make it 200 cards and just add more guys who didn’t appear in Flagship. And they still had 5 guys (Joe Jimenez, Tyler White, Rich Hill, Luis Severino, and the Stevie Wilkerson you pulled) who already had cards picturing them with the same teams in either Series 1 or 2.
I found 2 hanging packs, and I was a little disappointed. It was nice seeing old guys like Big Mac and Griffey, but the lack of guys left out of Series 1 or 2 made it disappointing. I think the worst part about it was most of the cards had backs that were in the opposite direction than Series 1 & 2 cards.

I'm not going anywhere near this joke of a set, so I'm glad you guys did the work for me. There are some nice singles in here, like the Wilkerson and Kershaw. (Arozarena's RC is worth chasing, too.) I even like the Colon. "retro" all-star stuff is fine, and considering Pujols passed Willie Mays on the all-time HR list this year I'll let him have a couple cards. But five?!?

Repeat players is just one of the many issues with this set. Outdated team affiliation is another.

I agree with the idea that this should have been a small boxed set, even if Topps sold it as an online-only item.

I posted the sane thing about Big League m last week having an overabundance of Trout.

But I must. Have. That. Gracie. One of the best cards I've seen this year.

I see what you did there: "a bit of a stretch" referring to a pitcher.

OK, the Bartolo Colon is awesome for numerous reasons. The rest of the set....yawn!

"In short: how can you properly document the three-month insanity that we agreed to call a baseball season?" Do something creative? Nah, just do the same thing you do always, just poorly, because most of the card-buying public will snap it up anyway.

Where there even photographers at the games this season?

I had my Target shifts yesterday and today. The vendor was there when I was leaving yesterday and there were 7 guys waiting for him to finish. When I got in this morning, there was plenty of Update packs and blaster boxes...and in the toys section there were more Update blaster boxes and hanger boxes. Maybe the flippers saw there was no resell value for Update? Anyway, I got 2 hanger boxes and a pack today to go with 2 blaster boxes I was fortunate to pick up a week or so ago, and that may be enough for me...too many doubles and questionable subsets and not enough...updating!

The Padres team set is a mess. Guys who are gone and no Jake Cronenworth card. 2020 Topps Update Mess

Actually found a few blasters of this at a local Target. I bought one because, what the hell I haven't been able to find cards in forever.