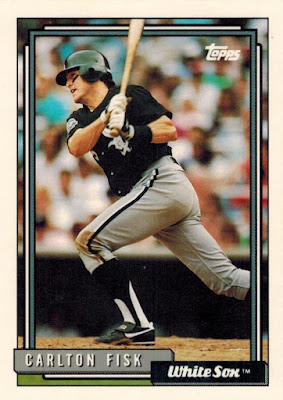 I had a thought the other night: if I were to put together a timeline of my collecting life, what would it look like?

Instantly my mind went back to notable firsts, big moments, dream cards acquired -- but after a while I came to realize that my collecting timeline really starts on the day I was born: February 19th, 1992. I like to say I acquired my collecting genes from my parents: my dad collected baseball cards as a kid and has collected records basically his whole adult life. Both my parents enjoy hoarding books, as most of my earlier memories involve being surrounded by bookshelves (it would be much longer before I acquired that particular collecting gene from them).

My dad has told me that he bought a pack of 1992 Topps to celebrate my birth -- he doesn't know what happened to it, nor have I ever opened a pack of my birth-year Topps in the years since, but in my head I like to imagine that pack contained  a Carlton Fisk or a George Brett, one of those few hangers-on from my dad's youth, still in the game when I was born. 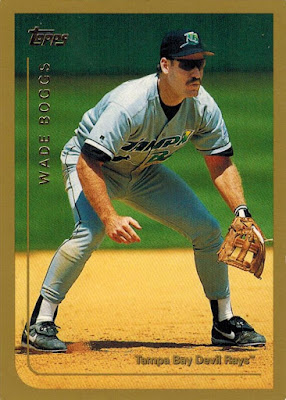 I don't exactly recall when I bought my first pack of cards, or what they were -- but my most educated guess places it as a pack of 1999 Topps, purchased when I was seven years old.

Admittedly, it isn't the greatest starting off point -- '99 is easily a bottom-tier Topps set -- but it got the collecting juices flowing, and I'm sure I got a huge kick out of pulling cards of guys on those weird new teams called the Diamondbacks and Devil Rays. 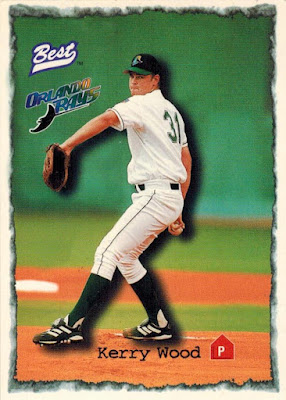 I collected all the major sports in my early collecting years, and I vividly remember the little blue binder I used to put all my "good" cards in as a kid (including this minor league Kerry Wood that I thought would make me a millionaire one day).

That binder multiplied into two binders, then three, then four...all the way up to the 80-plus binders spread across my room right now -- and while I don't know what happened to that first little blue binder, it'll always loom large in my collecting memory. 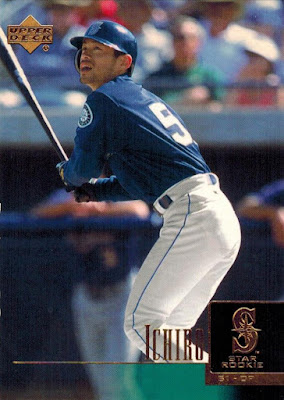 My first pack of cards and my first binder exist as hazy memories in my mind -- I don't recall many specifics about them, but I know they existed.

Looking back, I have to say my earliest clear, vivid collecting memory is sitting in the backseat of my mom's car, ripping open a pack of 2001 Upper Deck...and pulling an Ichiro rookie(!), still one of the most treasured cards in my collection today. 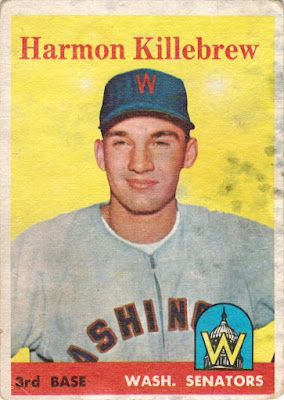 Here's another unclear memory: I don't specifically remember my first card show, but I'm guessing it was one of the big convention hall gatherings in town (the same convention hall show I still attend, in fact).

I have an image in my head of digging through a box of discounted vintage with my dad, the spoils of which resulted in some of the first heavy hitters in my collection (including the '58 Killebrew you see here) -- I guess even then I knew I was destined for the grimy, well-loved cards of the world. 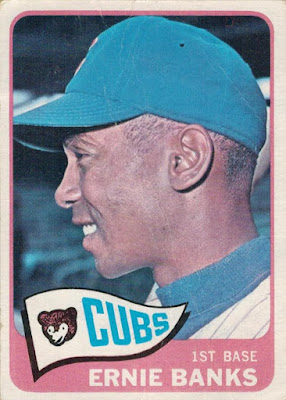 I've mentioned it many times in the past, but the card shop of my youth was a place called Graf's, an unassuming little store on a street corner a few towns away.

I bought some of my first binders there. I bought my first cheap boxes there. I think I dug through my first dime boxes there. I slowly built up my vintage collection there -- I bought my '65 Ernie Banks from Graf's, a card that, personally speaking, is probably the most iconic card I own because of the memories held within it.

Before Graf's, I think I treated baseball cards like any other hobby -- I collected Hot Wheels and Beanie Babies and many other things over the years -- but that little shop, more than anything else, truly convinced me how fun a lifetime of collecting cards could be. 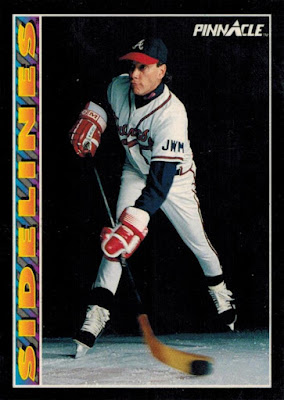 For some inexplicable reason, I completely ditched baseball cards in favor of hockey cards for a single year -- every time I went to Target or Kmart or wherever else in 2005, I bought...hockey cards.

While I still like hockey, and don't mean this as anything against its fans, this odd year-long foray remains one of the great mysteries of my youth and adolescence: baseball is the sport I was born to follow. 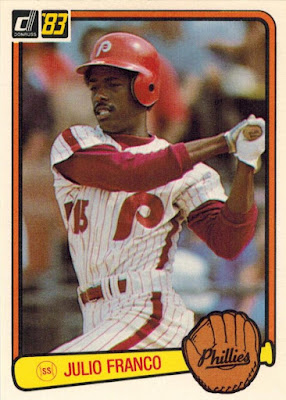 I try not to have too many regrets in life, but here's one: the last time I went to Graf's, I bought almost all hockey cards.

Sure, I bought some baseball for old time's sake during that last fateful trip -- including this still-treasured Julio Franco rookie from a 6/$1 box -- but the vast majority of my purchases were cheap hockey packs and boxes. I don't remember if my parents and I read that Graf's was closing, or if we simply tried going again and found boards on the doors, but either way that wound up being the last time I ever saw card shop of my youth. And I bought hockey cards...

I've been to other card shops in the years since, but none of them can so much as light a candle to the heaven that was Graf's. 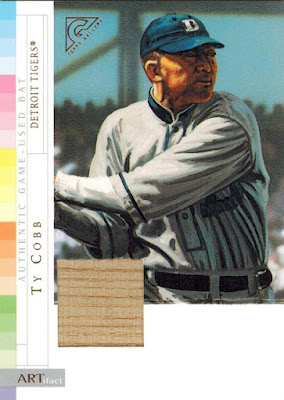 I don't remember what shocked me back into sanity, but I started collecting baseball cards again right around my freshman year of high school.

Trouble is, I brought my hockey card tendencies with me -- that is, I continued to hoard jersey and autograph cards. I still bought packs and chased singles of my favorite players, but I treated jersey and autographs as the real treasures. As a high schooler on the almost non-existent budget of a high schooler, I still wonder how I did it, how I continued to convince myself I was getting the most out of the hobby this way.

I still have a good amount of the bats and jerseys and autographs from those days stowed away in a binder -- including this Ty Cobb bat card I received from my dad as a Christmas gift many moons ago -- but it's probably the least flipped-through binder in my room right now. 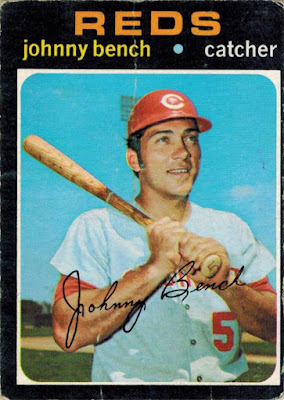 Technically, my forum days began a few years prior, when I joined an MLB Showdown forum, but that was mainly to discuss the game, not trade the cards.

I joined my first trading forum not long after I got back into baseball cards -- and while I look back upon those days with a fair amount of anguish (oh the infinite book value-for-book value trades!), truth is it did introduce me to the online community that would soon play a larger role in my collecting life, as well as add quite a few notable cards to my collection (like my '71 Bench!). 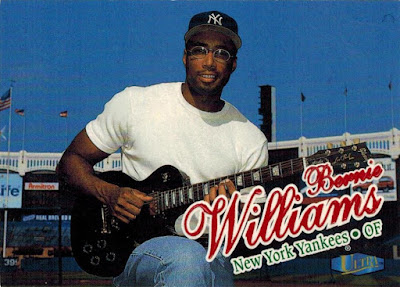 I can remember the exact moment I became the type of collector I am today.

I was flipping through a dime box one card show morning when I came across this Bernie Williams, a brilliant piece of cardboard I'd never seen before. I didn't buy it. Great card, sure, but Bernie Williams isn't really a guy I collect and isn't collecting only about chasing cards of guys you collect? Repeat: I DIDN'T BUY A BASEBALL CARD OF A GUY PLAYING GUITAR. After days and weeks and months of thinking about it, I went from maybe I should've bought that card to Yeah, I should've bought that card to WHAT THE HELL AM I DOING?

Player collecting, set collecting, and all types of collecting are fine and good, but at that moment I realized that in the end, collecting should be about anything that gives me pleasure, and of course a baseball card of a guy playing guitar gives me pleasure (oh, and happy ending: I eventually found a different copy of that Bernie Williams card!). 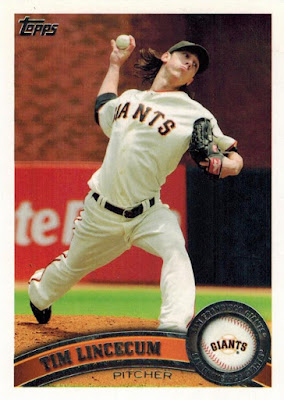 I started this blog on a fateful December night in 2011, mostly on a whim.

At first I mainly intended it to be a place to discuss baseball and the weird quirks of my own collection -- like if it was too early to start casting my Hall of Fame votes for Tim Lincecum -- but over time it's become so much more than that: it's become a trading post, a sounding board, a community I never knew I needed. 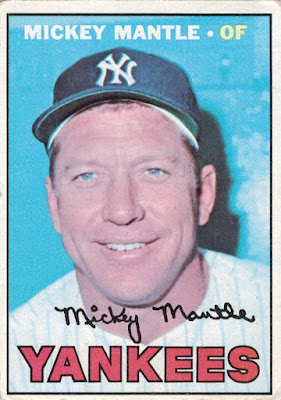 One thing I love about blogging is that a blog itself kinda acts as its own timeline.

Every turn, every swing of my collection is documented right here so that I don't have to rely on fuzzy memories and imperfect images -- the packs I've opened, the people I've traded with, and, in an unprecedented stroke of luck, even the time I found a Mickey Mantle in some dude's basement. 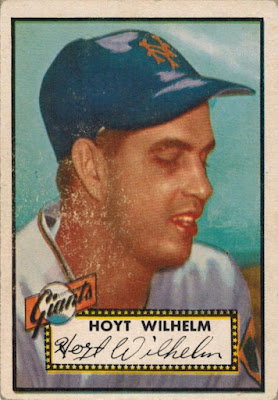 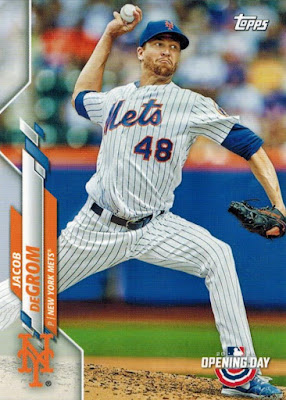 My collection, like all collections, has ebbed and flowed, but I've never stopped collecting since the day I bought that first pack of baseball cards in 1999. It's been a joy, an addiction, a connection, a passion, a whatever-you-want-to-call-it ever since. Baseball cards are a part of my life. Always will be. I just bought a couple blasters of Opening Day last week, in fact, and I felt that youthful joy all over again, breaking the seal on each and every single pack, hearing that quiet crinkle and pop.

Now zoom forward 29 years and just imagine what that timeline would look like.

You did some weird things as a kid,but that hockey card thing was REALLY odd,haha!!

Glad you still get the buzz,I enjoy it with you..

Awesome post. If my memory wasn't so flaky... I'd try to do one of these. I've got a lot of my collecting stuff down for the past 10 years... but a lot of that has to do with using my blog as a diary. Most of my childhood stuff would be speculation... although I try to write about things from that era when they do pop into my head.

Like Fuji, I don't trust my brain to remember specific details about my timeline... but this does put me in mind of a post about one childhood collecting detail, a post I started and never finished. In my current state of trying to publish more often, I'll have to dust that one off.

If you still have any of those hockey cards, I wouldn't mind seeing them sometime...

Fun post. Night Owl touched off a similar-themed bat around (going by-year) a while ago but doing it by collecting highlights is a fun variation. Anyway my entry to that one is at https://njwv.wordpress.com/2018/12/04/reminiscence-bump/

This is a great post! I wish I could remember all the notable dates from my collecting years. I do, however, remember my dad buying a 1958 Killebrew from a card show when I was young.

I still have that card.

I love that at ten years old you were already buying a vintage Ernie Banks! Great post too BTW, it's always interesting to see how people's collecting habit's have evolved.