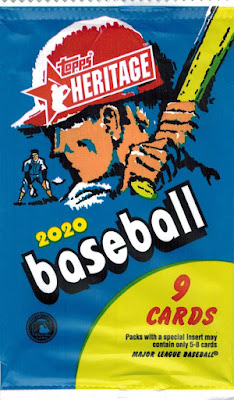 Heritage is moving into extremely dangerous territory this year.

But while, yes, my attitude toward the original set is a vital (and, from Topps's standpoint, uncontrollable) factor in how I feel about Heritage in any given year, I think how I grade Heritage goes a bit further than that. 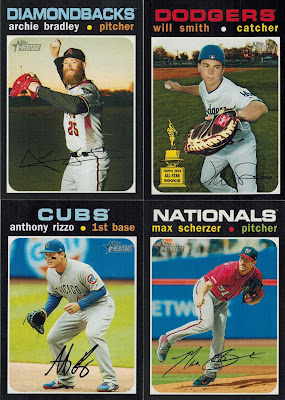 The question more becomes: Could I see this card in the actual, original set?

I'm not as much of a stickler for the specifics of the design as most others seem to be. Sure, I wish Topps would be a bit more attentive to the minutiae of faithfully reproducing a baseball card, but if there's an extra space between a name here or a shrunken font there it's not going to completely ruin Heritage for me. With me, it's more a matter of does the card evoke those feelings of the set it's supposed to honor? Does it make me want to go back through my binders and appreciate the originals all over again?

It's hard to say in words what this means, or how it's accomplished, but I can say that 2020 Heritage succeeds on this front -- I can, for instance, see all four of these cards as vintage '71s, and I especially appreciate the mixture of action and posed shots as per the originals (which I was worried Topps would ignore). 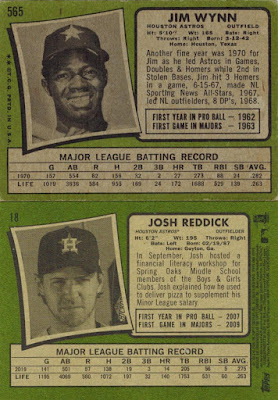 The backs are solid, though one failure for me is that Topps didn't use the strange, stunted English often found on vintage text ("Another fine year was 1970 for Jim..."). 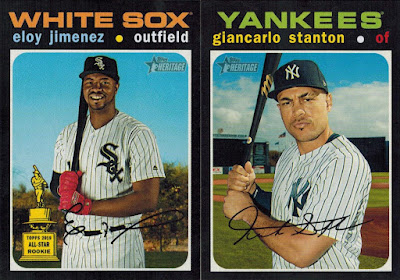 Heritage SPs continue to be a paradox for me: aggravating in theory but somewhat exciting to pull.

One could argue that even these stay faithful to the originals, as a handful of '71s were actually short-printed -- I still don't know why some vintage cards were SPs, though, as they're not the obvious cash grab present-day SPs are (printing issues, maybe?). 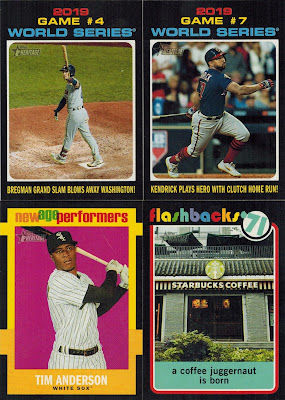 The subsets are cool, as usual -- though I can't help but imagine an asterisk over all the Astros ones.

I will once again be building the News Flashbacks insert set, and my lone New Age Performers pull inspired me to start a new player collection with Tim Anderson (hometown star, batting champ, what more do I need?). 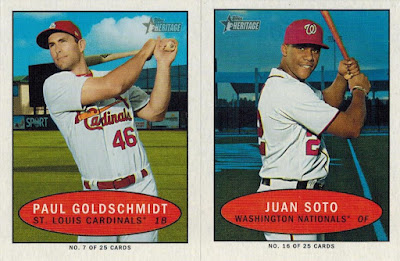 Retail inserts continue to be underappreciated but wonderful. 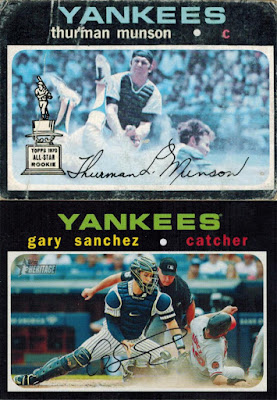 I'm not the first to say this, nor will I be the last, but one recent trend I like with Heritage is that it's started to honor very specific cards.

Heritage is, in essence, one big tribute, but in the past it's seemed like merely a nod to the originals rather than a full-on embrace of it. There wasn't a Coke-bottle shades Ryne Duren tribute in any of the late '50s/early '60s Heritage, nor was there a batboy card in the '69 edition of Heritage tribute. Last year's immaculate Neshek/Palmer & Frazier/Harrelson mashups in honor of  a couple of '70 Topps's most memorable moments began a that spilled over into 2020 Heritage, thankfully.

First off is this Gary Sanchez, a terrific tribute to perhaps my favorite (and most expensive) '71 Topps card, the iconic Thurman Munson play at the plate. 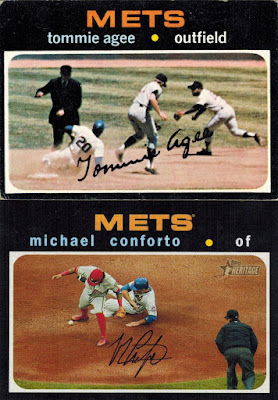 But in terms of the card itself and its evocation of the original, I think I like Michael Conforto more.

For lack of a better term, it's got the weirdness that's missing from a lot of baseball cards these days. I'm not particularly sure what's going on there, nor do I know where exactly that photograph was taken from, but dang if it isn't amazing. I believe we need more mystery in our baseball cards. Plus it shares a card number (#50) with the similarly quirky '71 Topps card of fellow Met Tommie Agee, as well as the sacred runner-fielder-umpire triumvirate (also rare in today's hobby).

This is Heritage at its finest. 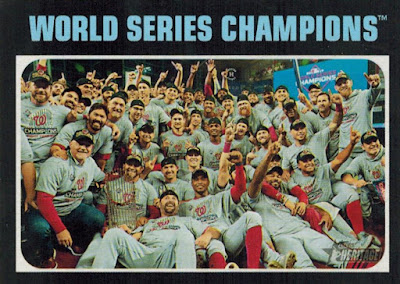 Like so precious few of my teachers growing up, I'm somewhat of an easy grader when it comes to Heritage, and I give this year's edition a solid B-plus/A-minus (probably closer to A-minus with the extra credit earned by the Sanchez & Conforto).

More than that, though, 2020 Heritage foreshadows all the excitement of the glorious '70s designs still to come.
Posted by Nick at 5:30 PM

I opened one blaster and was fortunate to pull the Sanchez. Munson came immediately to mind. His card is such a classic, and my favorite 71. I found the shiny background on these hard on my eyes. Of course my string of luck continues with every card in three packs badly dinged. I'm sending all 27 to Topps just to make them work a little extra. The box was fine, no tampering or damage. Will this be a set build for you?

That is so cool using those similar shots!!

Topps heritage looks pretty nice this year. I should probably get some some time.

Love the tribute photos to the original 71's. I know Night Owl showed off a few... but I can't wait to see someone write a post that shows off every single one.

I'm usually picky but I'm all in on these. Doesn't hurt that the playoff cards depict the Nationals victory. Hadn't seen those Bazookas until now - nice!

The last series back in the day (of 7 or so usually), came out so late that there wasn't much interest in baseball since it was after the season's end. They never sold nearly as well as the other (6) series, therefore they didn't print as many.