The year of less has been so much more 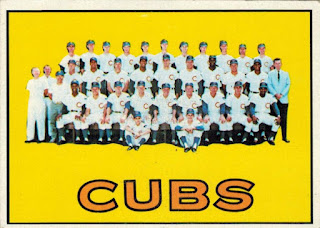 This year has been a different one for me and my relationship with baseball.
I know I've watched less baseball in 2022 than pretty much any other time of my life - I love working night shifts for a lot of reasons, but getting home around 10 at night doesn't leave much waking hours for ballgames. Still, judging from how my two hometown teams have been playing this year, I haven't been missing much, and the Cubs especially are doing their absolute best to alienate me. (Someone named Alfonso Rivas is their starting first baseman.)
While you could similarly say I haven't done as much with cards here in 2022, I think the more precise way to put it is that I've been more selective about what I'm doing with my baseball cards this year. 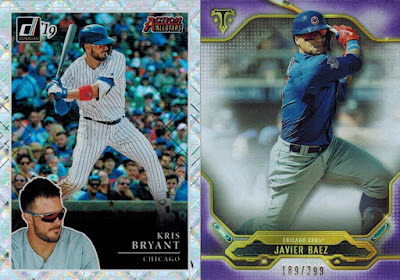 The great retail drought appears to be coming to an end, but truth is I haven't been in the Target card aisle much this year (you can probably count the number of times on one hand).
In a rare moment of weakness, I bought a blaster of 2022 Gypsy Queen (for $24.99!) a couple weeks ago, got almost nothing I needed, had little fun opening the packs, and rued that money that could've been better spent elsewhere. I've been spending a fair amount of pocket cash on cards in 2022, but it's been more geared towards COMC's archives or picking up current singles I need for pennies on Sportlots. And it's left me wondering why I haven't been doing this for years already.
I feel much better about shelling out for cards I know I need rather than going for the vague fun a blaster might offer. 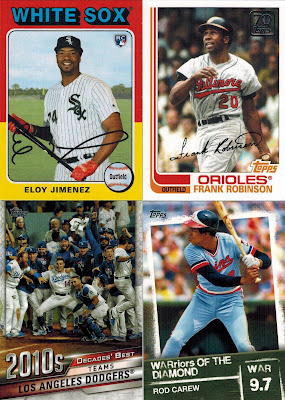 It's also true that my trading has gone way down this year, too.
This part I'm not as pleased with. I constantly need to remind myself to be better about sending unwanted cards to homes that will love them. But even my ineptitude in this department hasn't stopped people from sending me cards - including a few readers who recently sent me those joyous I have cards for you! emails that I never tire of seeing.
A reader named Kyle, for instance, sent me a package that knocked out a few treasured hits from my want lists, with a few fancy (former) Cubs coming along for the ride. 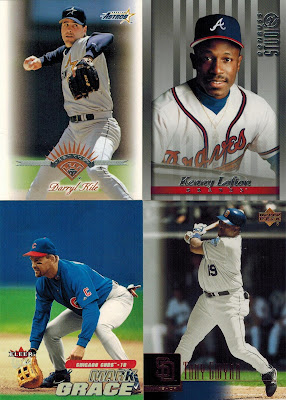 Kyle also sent me a new Darryl Kile, which seems fitting (along with a bunch of other top-tier player needs!). 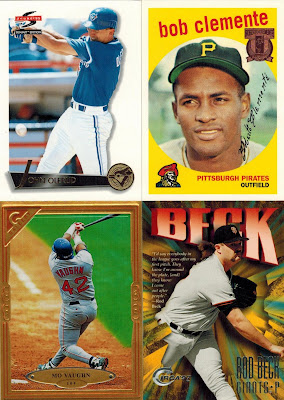 Other dudes I like from Kyle - '90s Circa had some serious '95 Fleer vibes, and I absolutely love it. 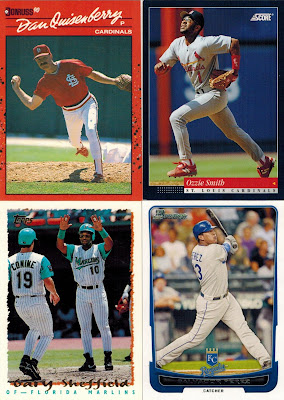 A different reader named Randy claimed a few cards from my ten-year giveaway posts - and sent me a whopping four cards from my Dime Box Dozen list in return that were by no means necessary, but still much appreciated.
Randy was one of what seemed like 37 different people who sent me that '90 Donruss Quiz, which makes sense because shame on me for needing anything from that set by now. 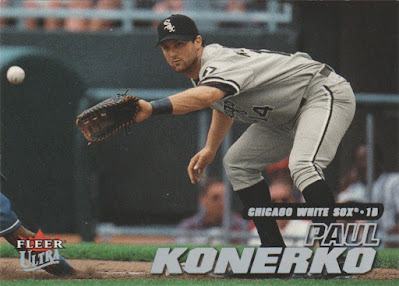 I'm convinced my readers have some kind of mysterious treasure trove of Dime Box Dozen needs, because a reader named Michael recently gifted me a wrecking ball of an envelope that included one... 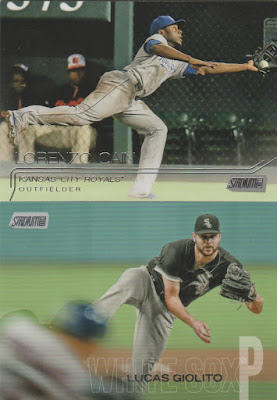 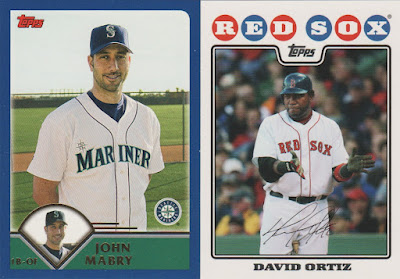 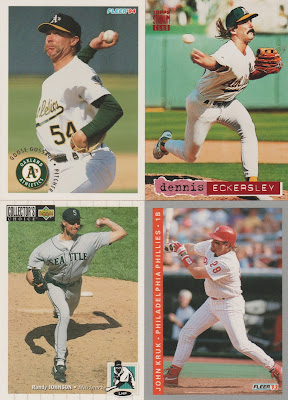 six, seven, eight, count 'em, NINE different cards from my DBD list!
A's Goose, a new Paulie, a base Topps of Obscure Guy I Collect For Some Reason John Mabry, and so much more caused my Dime Box Dozens to go under construction for a few days there. 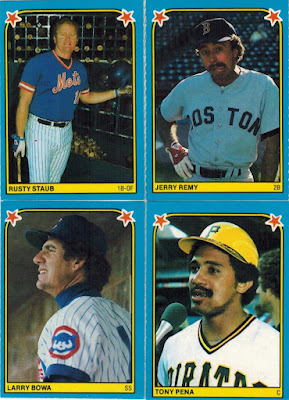 It's been a thrill to develop relationships in this community of fellow bloggers, but I also have an admiration for those who are content to sit back and read the often nonsensical words we bloggers produce.
One reader named Wes has been sending me cards for years now, and he recently dropped another package that really had me wondering why I've been so reluctant to embrace these Fleer Stamps for so long. 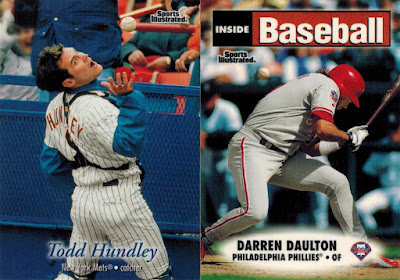 On the flip side of the coin, I've long been a fan of these late '90s Sports Illustrated sets, but I feel like they still remain a well-kept secret around the card community. 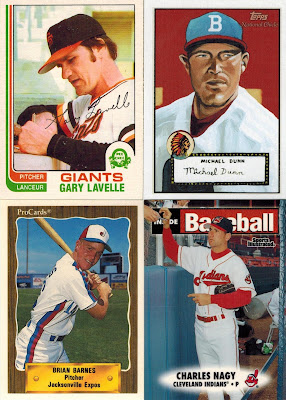 Wes also sent along a few mini-collection hits, including a new OPC which never fails to brighten my day. 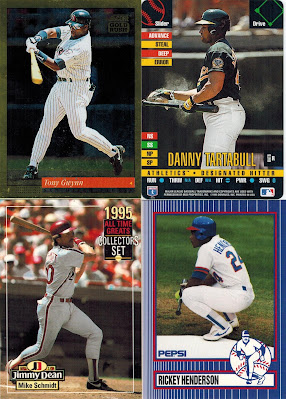 A few other randoms that have me wondering how dangerous supermarket food aisles would be if Jimmy Dean & Pepsi still made baseball cards (as if my diet isn't awful enough already). 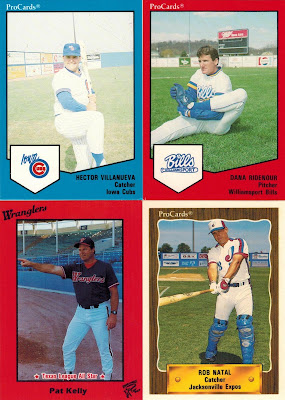 I will always, always take loose minor league singles people have lying around, because whether it's outfield-wall ads or catchers hitting in shinguards(?), there's bound to be something in there that'll catch my attention. 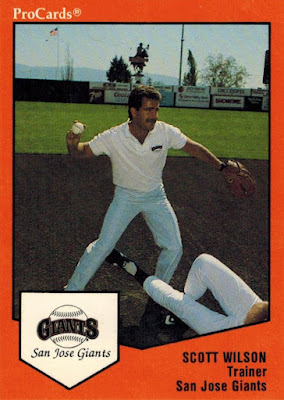 I mean, show me a major league card that shows a TRAINER turning a double play! (And you better believe this counts for my double dip mini-collection.)
I have fond memories of summer vacations from school where I did little more than watch baseball every day while sorting my cards. Those were beautiful times in their way. But at some point I found that I probably couldn't spend three, four, five hours every day immersed in baseball. My love for the game, and its cards, had to be content to simmer in the background of adult life, rather than constantly on full boil.
And truth be told, I don't think my relationship with baseball has ever been better.
Posted by Nick at 5:46 PM

Yeah,it makes the time you do get to spend on your passions that much sweeter... and Michael Dunn looks like he's ready to kick ass and take names,haha!

ComcC, Sport Lots, and Card Barrel for definite wants, card shows too sort of, but busting current retail wax... Money better on gas, lol. You've made the right call this year for sure.

I've watched less baseball but that's mostly because I scrapped cable and then scrapped my MLB TV subscription over the sport's stupid labor issues. So now my choices are reduced to network games, ESPN games, and whatever's streamed on whatever streaming device I DO have. It's OK. I don't mind ... except when I turn on CBS or NBC randomly on a Sunday and they're showing SAILING. What the hell is MLB doing?

I don't watch much baseball these days and feels like I'm familiar with less and less of the current players. I think I've given up trying to keep my collection peppered with the latest hyped rookies (whereas in years past I would have fear of missing out on the next Trout) but still plenty of other areas of my collection to spend my time on that I enjoy more.

I have watched less baseball this year than at any other time of my life. Oddly, I am in a Yahoo fantasy baseball league, so that’s where I’ve been getting my news about baseball. That league is a lot of fun. On another note, lately I have been rediscovering “hidden gem” sets that I have totally forgotten about. Among them: 1994 O Pee Chee, 1999 Victory, 2002 Fleer Triple Crown, 2005 & 2006 Bazooka, and 2011 Bowman (yes, a Bowman set.)

I'm watching less baseball than ever before too. Combination of life things (tough to watch a game in the evening when everything else is going on in the house), plus streaming never seems to work (for some reason the Yankees' YES network asks for a password every time and then often doesn't load). Of course, I am superstitious enough to consider that the reason the Yankees are doing so well this year is because I'm not watching to give them bad luck . . .

I haven't been watching much MLB, but I have been watching some summer league baseball in a league made up of college athletes. There is a local league in my area that has been on ESPN. Thanks for the shout out. I'm glad I could send you some off your wanted list. Thanks for the cards from your giveaway. Randy

I guess I'm an oddball, because I've watched MORE baseball, or at least Mets, the last couple years than any time in my life. The pandemic means I'm not in Singapore half the time and I'm also not out teaching classes a couple nights a week, so what else is there to do? It helps that the Mets are very good this year, of course.

That trainer DP card must be something I have to track down.

I don't watch as much MLB game-by-game where maybe over a course of 162 games, there is too many league wide, but I'll tune in more often than not for an Angels game, notably an Ohtani start or just to watch his at-bats during non-pitching days.

I'm watching more baseball this year... but that's because I have more access (Apple + has free games on Friday). I still only catch maybe two hours a month on tv. As for collecting, I'm glad you've found a new way to spend your money. I've actually purchased more blasters this year than 2020 and 2021 combined. But it's still nothing compared to five years ago. I'll always be a bargain hunter, so dime boxes will always trump any box breaks.

As popular as you are (and rightfully so), I don't think that folks will ever stop wanting to send you stuff.

Definitely watching less baseball and definitely have issues with password issues even though I say them to various authentication tools that seem to never work. Go Cubs Go. RIP Harry