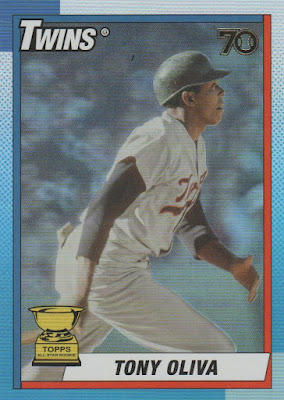 Round 1...
I've been in customer service for the vast majority of my working life, but a while back I embarked upon an uncharted journey - trying to participate in Kevin's card draft over at "The Diamond King" smack dab in the middle of a weekend workday.
The premise is simple enough: a few bloggers and I submitted nine cards into a pool that we'd draft from over the course of nine rounds. It seemed like an incredibly fun way to score some new cardboard, and I was eager to get in on it - eager enough, in fact, to try and sneak a few card drafting minutes into the risky abyss of working a cash register.
Things started out well enough - one of the many things I enjoy about working at a bookstore is that it rarely gets insanely busy - and I was able to snag this Tony Oliva with my #1 pick, easily my top choice of the draft pool since you rarely see him in modern sets. 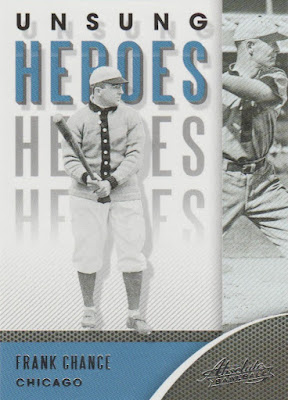 Round 2...
This is first retail job where I've a) been able to sit down, and b) had access to the internet - I've spent a lot of time standing at cash registers staring into space, and I'm incredibly thankful for both of said things.
After a few idle receipt print-outs and Have A Good Day well-wishes, I happily selected this nifty Frank Chance insert, which is further ammo for my please for Panini to make more old-guy cards since there weren't many logos in turn-of-the-century baseball that would need obscuring. 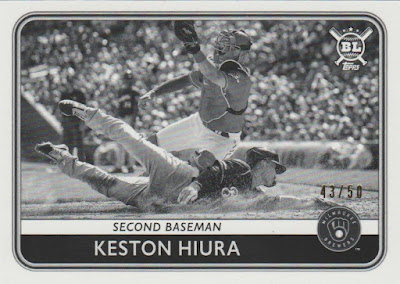 Round 3...
Somehow, I managed to get each one of my top three most-wanted cards from the draft pool - this Hiura is a nice low-numbered parallel of one of 2020 Big League's finest specimens. 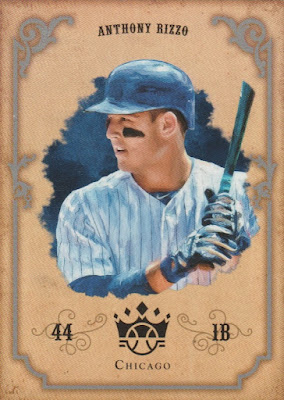 Round 4...
I drafted this card even though I like almost nothing about it - I've never been big on Diamond King stuff, and the lack of logos is way too obvious.
As is our fealty to player collections. 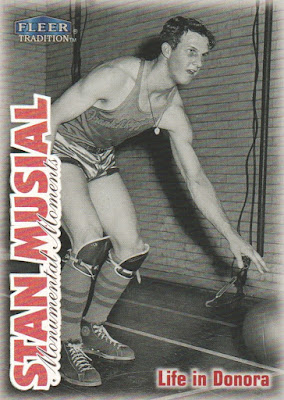 Round 5...
I was starting to get suspicious at this point.
One of the rules of retail is to never say things like Wow, it's so slow today! or Hey, no one's called for a while! because, inevitably, you'll jinx it and six different customers will come to the register right as four phones ring. But this was a Sunday, after all, and aside from a few perfectly nice book-buying folks, the card draft was going oddly smoothly.
Surely something's gonna happen, I thought - right as I drafted this weird insert of NBA star Stan Musial (nice kneepads). 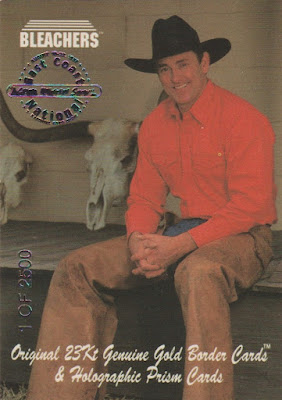 Round 6...
"Can I get this gift-wrapped?" said the customer, right before my next draft pick came up.
I jinxed it. Gift-wrapping is, I suppose, a necessary part of retail business, but I've never liked doing it. But the cardboard gods were with me on this day, because as soon as I rose from my chair, one of my fellow co-workers volunteered to do the wrapping. And they had no idea how thankful I was for them at that exact moment.
Sitting back down, I happily drafted this strange Nolan Ryan promo, because for some reason I can't get enough of these bizarro '90s oddballs. 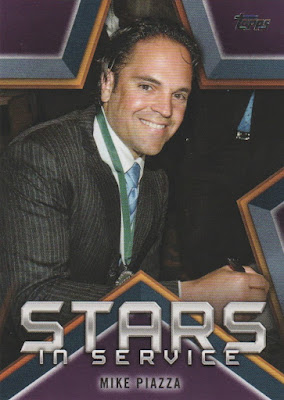 Round 7...
At this point I was just trying to pluck anything I had even a remote use for from the draft pool.
Which is why I took this generic-looking Mike Piazza insert which, for all its accompanying dullness, was a need for my autograph mini-collection. 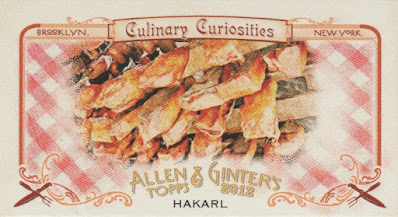 Round 8...
Here's a card I needed for one of the 735 different A&G mini insert sets I'll never come close to completing - Hakarl is a Scandinavian dish consisting of fermented shark.
"Culinary curiosity" indeed, and one I won't be sampling in this lifetime (cool card though!). 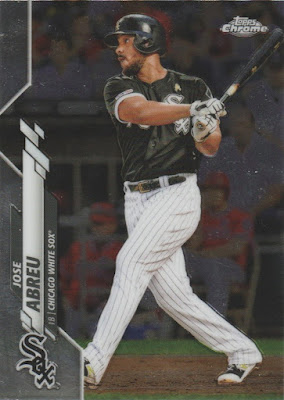 Round 9...
As my last draft pick got closer, I looked out over the cash register, fully expecting a parade of ten people to rush to the front of the store.
But, somehow, that didn't happen, and my end of the draft was complete when I selected this Topps Chrome Jose Abreu with my final pick. I was about 50-50 as far as whether I already had this card or not, but obviously without my cards in front of me, I had no way to check and figured I'd take a shot either way.
After my shift ended later that night, I took one of my White Sox binders from the shelf and found...I didn't have it! Nine picks, nine needs, and the bookstore didn't burn down!
I don't know about you, but I'd call that a successful card draft. 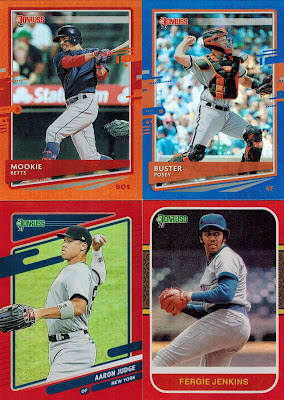 (I'd also like to note a few separate PWEs I received from Kevin before the card draft - the first of which housed these four Donruss parallels that I continue to find irresistible despite my apathy towards most Donruss designs.) 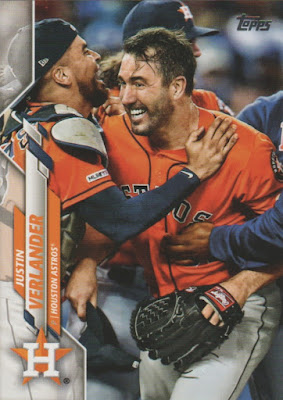 (And another PWE saw a sacred variation SP slide into my binders with this Verlander, further fuel for my weird addiction to photo variations.)
(Thanks for the extras, Kevin, and thanks for hosting a fun card draft!)
Posted by Nick at 6:04 PM

Nice draft haul - I sent in the Chance and the Abreu.

Bob Gibson played for the Globetrotters.

My new band will be called Fermented Shark,ha!... did good in the draft,on company time!

You did very well indeed. That Verlander.... sweet.

Hopefully Tony Oliva will show up in more sets now that he's been elected to the Hall of Fame.

I'm finding this hilarious because I was just today reading a book about fantasy football/baseball, and there were many stories about people going to incredible lengths to make drafts. Like drafting at work.

One guy had a job at a kid's restaurant where he dressed up as the mascot, and because he couldn't access internet his buddies came so he could draft in his Red Robin costume. Glad you didn't have to go to such extreme lengths.

I enjoyed my card draft a few months ago, glad you did too.

When we went to Santa Cruz on a field trip a few weeks ago, I said "dang... hardly anyone is here". Within an hour a ton of schools showed up and the food lines were crazy long. I should have kept my mouth shut.

Those card drafts were a lot of fun, and I hope he'll do another one sometime in the near future.

You beat me to that Oliva! The draft was fun hopefully we'll do it again.

Hopefully this post gets me off my butt and I can do this again. Just been soooo busy!