I should tell more people I collect cards 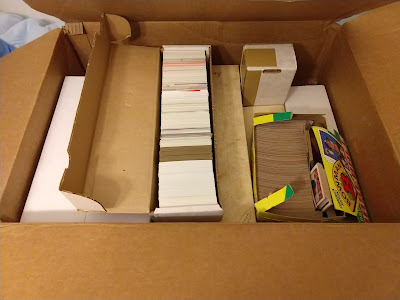 I've spent much of my life guarding the dirty little secret that I collect baseball cards from my peers.
As I've discussed on the blog before, very few people knew about my card collection when I was growing up, and even well into my twenties. I can't really give a good reason why. It's not that I thought I'd be demeaned for collecting, but I often thought I'd get blank stares and/or boredom, which to me is just as scary. I just figured it wasn't anything other people would be interested in, and so my cards mostly stayed within the walls of my room.
In recent years, however, I've been a bit more open with my collecting habits. A few friends who don't care a lick about baseball know I collect cards, and while I can't say I've gotten anyone down to Target and start their own collection, the response has been generally positive. It's made me wonder about all the time I spent keeping my collection in the dark. It's also made me realize how nice it is to even get the smallest amount of interest in a hobby I've devoted my life to.
I think a lot of people on this earth collect something that they don't think anyone else cares about, and are thrilled to discover they're not alone in their strange compulsions. Telling others I collect cards can also have purely selfish benefits as well.
While my last job ended up being a dumpster fire, I left on good terms with my coworkers. One of them told me someone had donated a huge box of baseball cards not long after I left (of course), and it'd been sitting around the warehouse because no one was quite sure what to do with it. My coworker never explicitly said the cards were gonna get thrown away, but that's what it felt like to me - and she said if I wanted to get them from her, I could just have 'em. When you throw the term FREE BOX OF BASEBALL CARDS at me, I'm there in a heartbeat.
As you might be able to tell from the picture at the top of this post, that box was massive. Problem was, the only think immediately visible off the top was an open box of 1989 Bowman - a putrid offering I've often called The Worst Set of All-Time.
However, I did find a Griffey rookie in there (I already have one if anyone needs this spare copy), which was a good sign to show that all the "better" cards hadn't been skimmed off the top by the previous owner. 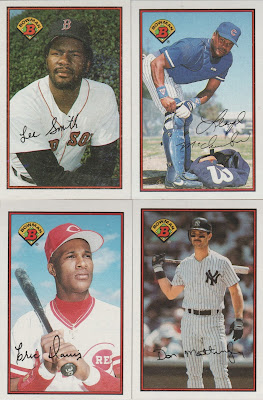 I was also astounded to discover that there are still cards I need from '89 Bowman, and even a (dare I say?) nice card with that Lloyd McClendon. 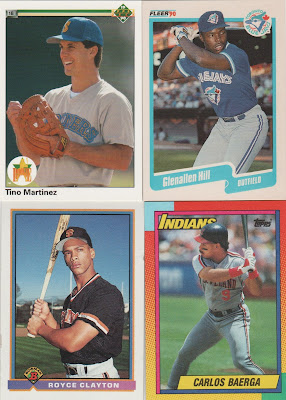 Early returns weren't fantastic - whoever owned these cards was obviously in on the overproduction-era boom, because I found long runs of one-time hot rookies like Royce Clayton and Glenallen Hill in the first few handfuls of cards I pulled out.
And while a fair amount of these dudes went on to have decent big-league careers, no one's covering a college tuition on their rookies these days. 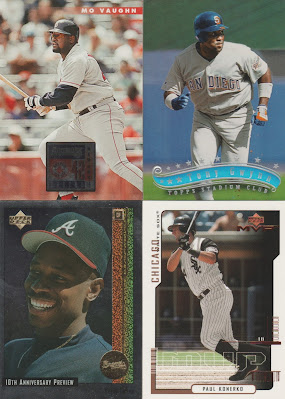 But then the light at the end of the tunnel started to get brighter - lots of later '90s and 2000s stuff started popping out of those boxes, mainly offshoot-brand stuff I mostly missed during my early days of collecting.
I don't know what I was expecting to find here - maybe a fun but disappointing romp through someone's collection of '87 Topps & '88 Fleer - but I sure never thought I'd see cards I needed for some of my most urgent player collections! 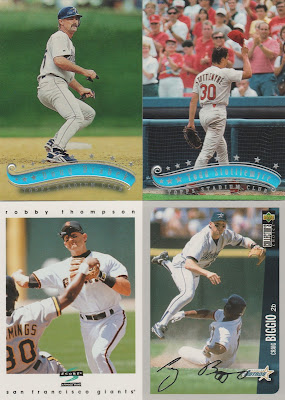 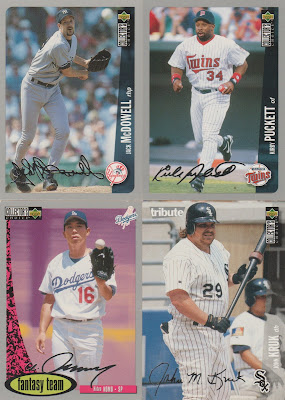 Whoever owned these cards was somewhat of a kindred spirit, because they obviously opened a lot of Collector's Choice in the mid '90s.
It's still one of my favorite brands ever (not to mention one I wish would've lasted a whole lot longer), and I still think these silver signature are some of the best parallels of a decade that produced a universe of them.
(Also: John Kruk White Sox sighting!) 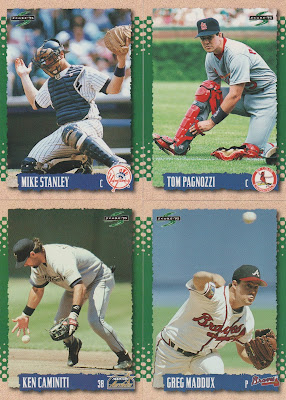 Working with books as I have for most of my adult life, I know there's something vaguely uneasy about stumbling into someone else's stuff - cards, like books, can be intensely personal, and part of me feels unworthy of being the random person who inherited this expansive collection.
Counterpoint to self: without me, I suppose, these cards would've just been thrown away - and nothing from '95 Score deserves a life in a landfill! 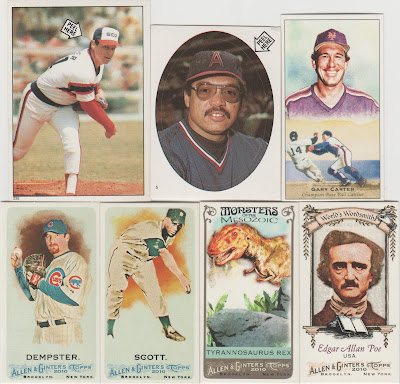 A handful of the minis I unearthed - the previous owner seemed to have a brief love affair with early A&G, as shown by the joyous number of minis in there. 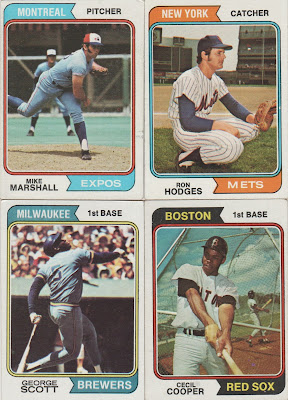 Oh yes, vintage!
Found a big run of '74 Topps at one point, and while there weren't any huge names, I'm still astounded by the number of cool photos I haven't yet discovered from this set. 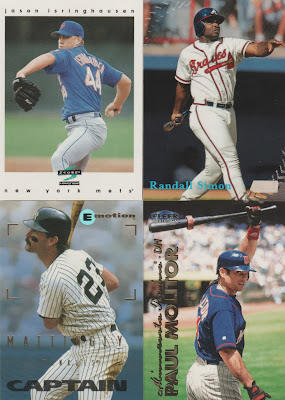 The '90s, perhaps more than any other decade, produced a mix of huge names I respect (like Mattingly & Molitor) alongside obscure dudes who I love for some reason (like Jason Isringhausen & Randall Simon). 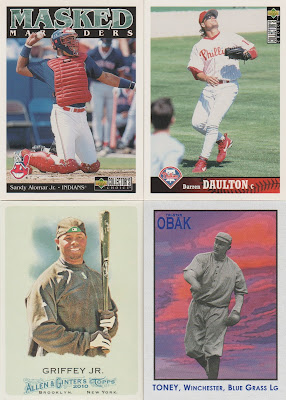 Another random smattering here, including Darren Daulton in the outfield(!) and a reminder that I really should mention Tristar Obak stuff on the blog more often. 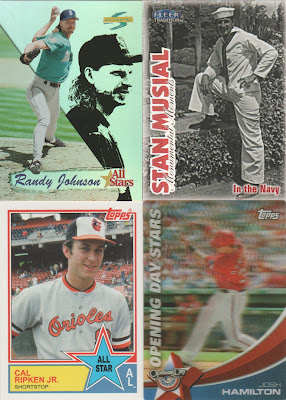 Base cards are where I go for fun, but inserts are occasionally good for a smile, too! Some collectors might ask but was anything WORTH anything in there? which I'd otherwise laugh at if I wasn't kinda wondering the same thing when I found a large stack of 2011 Topps at one point (sadly, no Trout rookies).
There's always the collector's dream of finding a Mantle in some forgotten box of cards at the bottom of a pallet in a dusty garage. That didn't quite happen here. But I didn't care in the slightest since everything I've shown so far already exceeded my expectations of these cards a thousand times over.
Still, finding Posey & Machado rookies I needed were a tasty little cherry on top. 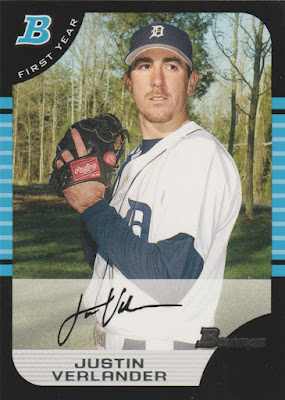 Not to mention a Bowman rookie of a future Hall of Famer!
I don't go parading down the street with my card collection, but I think I've come a long way in being more comfortable with the idea of other people knowing about it. I've bonded with people over a common love of books, music, etc., but interests don't have to be shared to generate community with good friends.
Plus, you just never know when one of them is gonna fall into a baseball card windfall, and I wouldn't want them wondering if only I knew someone who wanted these.
Posted by Nick at 5:12 PM

Pretty awesome! I'm going to start knocking on doors around the neighborhood just to tell them I collect cards.

Nice! I know just how much fun that had to have been.

That's awesome. A lot of quality dime box material in there, and them being free makes it even better.

Super awesome. I'll echo your sentiments on both Collector's Choice and 95 Score.

You seem to have the best luck ending up with collections that are given away - looks like a nice mix to go through.

Over the years I tell people that i am a "sports memorabilia collector",if they are still interested after that it is 99% cards.

Nick I've had my share of co-workers knowing that I collect cards & usually I get asked to make an appraisal & if I can help them & tell them what they have usually they get same answers of stuff from the late 80s to mid 90s & then after the news they give me the take their stuff for free off their hands look which basically if I want them I'll be glad to help get rid of them but if I don't want them then I try to pass them on to others who I know that might be interested in them. Either way someone will benefit from them.

Nice find! And the price was right!

That looks like it was a lot of fun to go through. Free boxes of cards never get old.

I'm not shy telling people I collect cards (often my go-to if I need a "fun fact" about myself to share). And yeah, it's mostly out of hoping that someone will say something like, "Hey, I've got some old cards taking up space.. want 'em?"
It hasn't happened yet, but that's the dream! :)

Anyone who is close to me (like friends and family) knows I've been collecting cards since I was little. But I do understand where you're coming from about not telling everyone. The past two years, several people (friends and family) have reached out to me to help them go through their collections to see if it's worth anything. In fact, I'm suppose to help my dad's friend look through their son's collection sometime this summer. So far none of them have offered to give me any cards though ;D

I love when this happens, and it happens a lot for me. Last weekend, a guy asked me to appraise his childhood collection, then when I told him it amounted to about $40, he foisted the cards on me. If you insist! Couple David Justice rookies and minor league cards, tons of junk era gold, World League Football issues and a 1970 Topps Luis Aparicio!

I don't know if that many people are still collecting different things these days, but I do think that a lot of folks are interested in things that they don't think anyone else will care about. And I do believe that there's a large percentage of those people who have a hard time telling others about said interests.