The COMC order I thought would never come 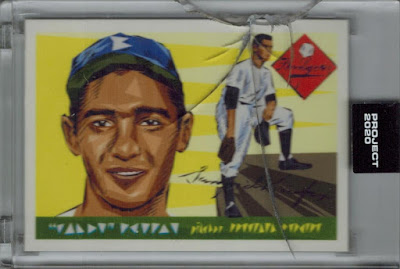 Last week, I woke up to an email that, against all odds, my COMC order had actually been shipped, and a big box arrived on my doorstep a few days later.
Like a lot of other people, I've been waiting on these cards for A LONG TIME. Four months, to be exact. So you can understand why I was starting to think this day would never come. On the one hand, I can only imagine COMC's massive backlog these days, and I get why things would be slowed to a crawl. But on the other hand, I'd probably be fired if I took four months to fulfill an order at my job. As a conscious customer, but also someone who wants all my cards, it's hard to know what to feel.
For what it's worth, I'm still shopping at COMC - I've already added a handful of cards to my next order, whenever that may happen. And, much like my other pandemic COMC package, I'd forgotten about a lot of the cards I bought here, so the long wait time kinda allowed me to experience everything in there like it was fresh and new again. Because in the end, I've yet to come across a card site that offers the variety and sheer fun you'll find at COMC.
The first thing that fell out of the box was my first Project 2020 card with this Koufax, which I got for a song thanks to some unfortunate handling at some point in its life - after all, I'm buying the card, not the case! 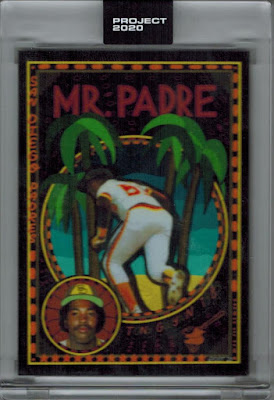 My second Project 2020 card slid out shortly after - this one uncracked and just plain beautiful.
I never planned on owning anything from the Project 2020 craze - I don't like most of them, and even the ones I do like aren't worth anything close the $20 retail tag. Their allure to the masses mostly remains a mystery to me. This Gwynn was the only one I saw that checked the "cool" (palm trees!) and "cheap" (three dollars!) boxes. (I'm not particularly enthralled with the art on the Koufax, but it's SANDY KOUFAX and it was way too cheap to ignore.)
I will say these are way thicker than I thought they'd be, and I'm a bit disappointed there - I was planning on cracking these out of their ugly plastic shells and displaying them in my binders, but I don't know if I have any pages flexible enough for their girth. 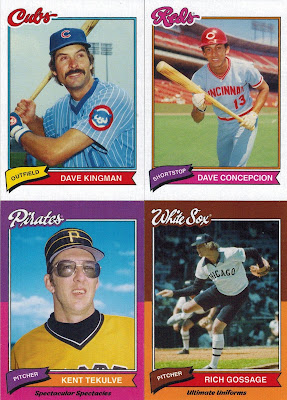 One of my main uses for COMC is plucking singles from recent online-only and/or exclusive sets I'll probably never see in the wild.
I'm a big fan of this Super '70s set Topps quietly released last year for many reasons - not the least of which being it finally gave us a card of Goose Gossage in shorts(!). 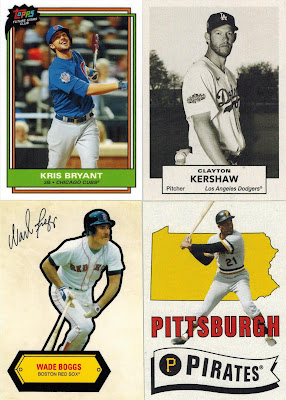 The tragedy here is that Topps's online stuff is more inspired and just plain better than a lot of their main sets, which is why I'm so keen on tracking them down on the secondary market.
If a regular ol' Topps base set had any of these designs, I'd most certainly buy it in gobs. 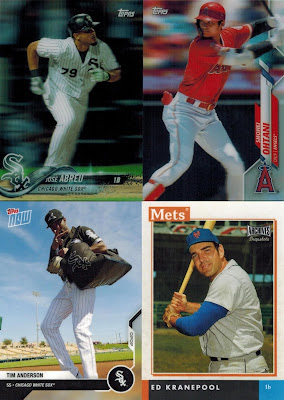 More Topps online-only stuff - can't remember the last time Ed Kranepool had a card in a modern set, and those Flagship 3-D cards have no reason to exist but are still mighty neat. 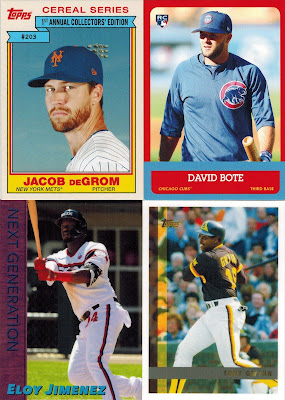 Really the only online offering I've even thought about buying directly from Topps are their Throwback Thursday sets, mainly because I love the odd mashup of baseball players on non-baseball designs.
For now, I'm content with buying cheapies on COMC, but I feel like I'm gonna eventually have to cave and give Topps my money one of these days. 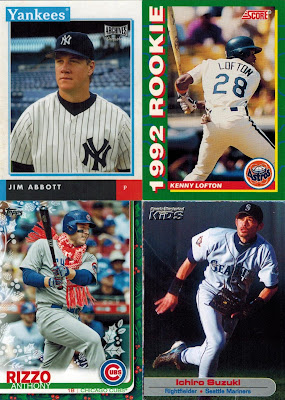 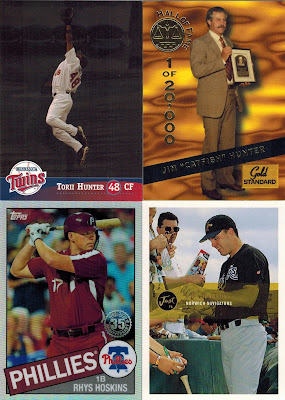 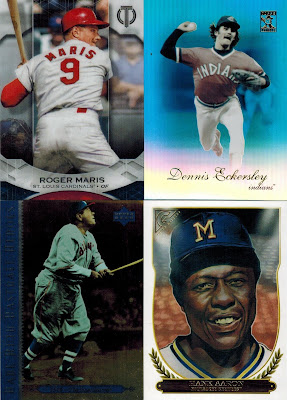 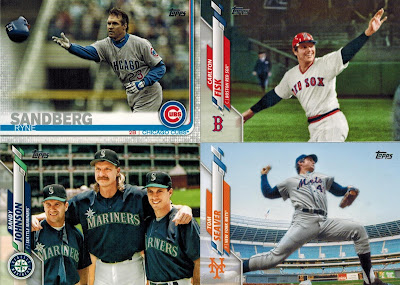 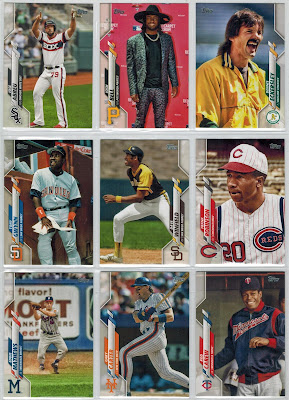 I REALLY LOVE CHEAP PHOTO VARIATIONS.
Given that most photo SPs are pretty tough pulls, I'm constantly shocked how affordable they are on COMC - I don't think anything from the huge stack of 'em I bought cost more than $1.25 or so. 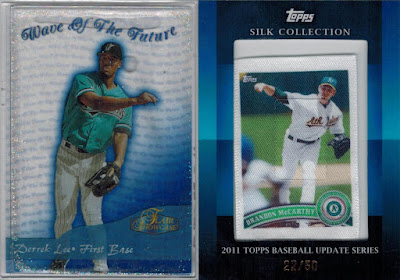 Cardboard is cool, but have you ever seen cards made of water or silk??? 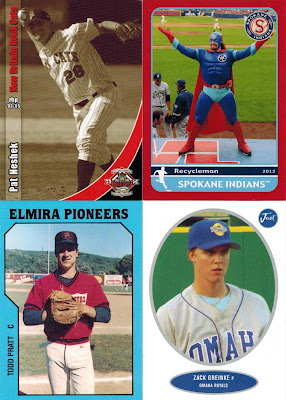 Buying minor league cards I want on COMC is tough - I have to wade through piles and piles of Low-A guys who never sniffed the majors to find dudes I like.
I'm particularly pleased with that early minor league issue of perennial "Obscure Guy I Collect" Todd Pratt, and a card of RECYCLEMAN! - the Marvel superhero we never knew we needed. 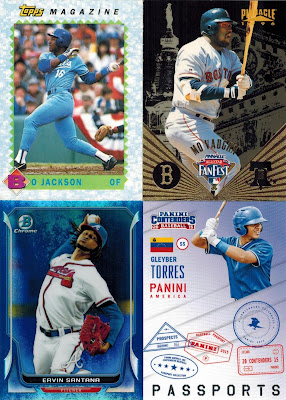 COMC's good for a nice mix of miscellany as well - I want all the bubble refractors, and that Torres is my first (painful) card of his zero-year tenure with the Cubs.

These Golden Age box bottoms are absolutely brilliant, and yes, I tore the perforated edges and divvied this up into three individual cards, the way god intended. 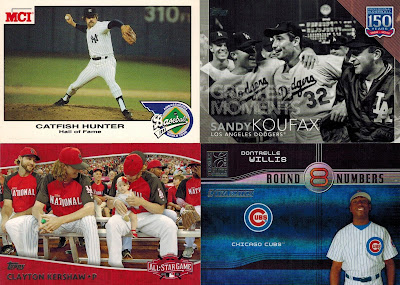 Horizontal goodies, including baby Kershaw and another Cubs zero-year card with that Dontrelle Willis. 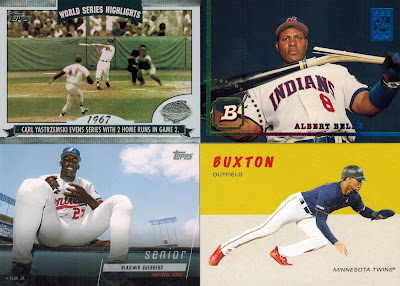 Digging through this order was really like an early Christmas. 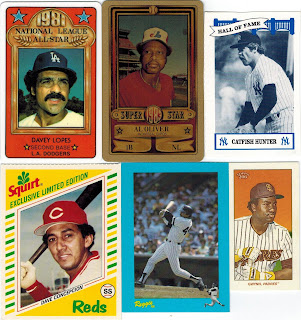 Smaller than your average cardboard, but every bit as great. 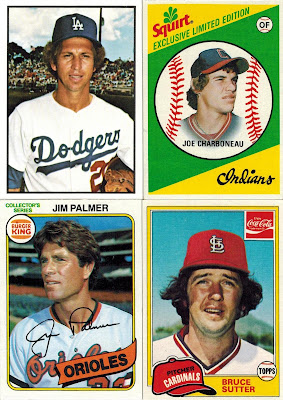 Food-issues or otherwise, it's hard not to fall in love with the late '70s/early '80s world of oddballs (Super Joe!). 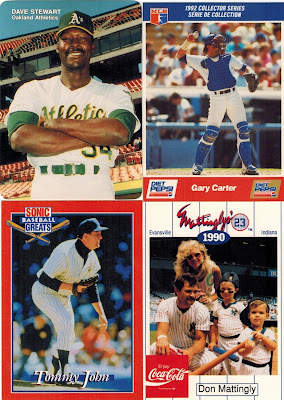 But don't sleep on the rest of the '80s and '90s, because there's quite a few goldmines there as well - that Mattingly becomes one of the rare full-family shots in my "Cards with Kids" mini-collection. 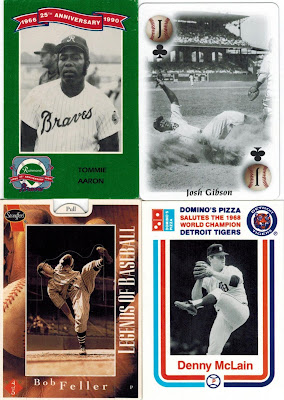 Greatness aside, oddballs also be educational - without COMC, I would've never known Stouffer's, of all brands, made pull-tab oddballs in the '90s. 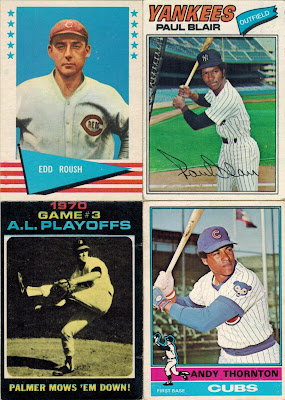 Some snappy vintage here - you'll have to take my word that the Palmer & Thornton are OPCs, and the Blair is a treasured alternate-universe Burger King oddball. 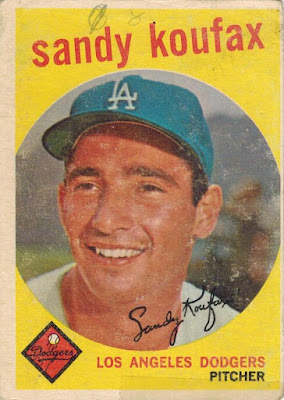 But the unquestioned jewel of this particular COMC order was a real, actual '59 Koufax!
Pretty much everything that could go wrong with this particular card has already happened - it's scuffed, taped, off-center, and written on. Add this all up, however, and you get a previously dream-worthy card that was actually in my price range! At a whole $25, it was lightyears ahead of anything in this order, but also quite a bit cheaper than any '59 Koufax I've seen. I highly doubt I'll ever own all of Koufax's Topps cards (might need to sell a kidney to fund a '55 rookie), but each one I manage to find feels like an improbable David-and Goliath-like victory.
After all that, I guess I'll see you in about a year when my next COMC order arrives - which I suppose is okay, because it might well take a year for me to properly admire and salivate over everything that came in this treasure chest.
Posted by Nick at 5:47 PM

A ton of great choices!

The online-only cards are all right but they can't match those food issue cards. That's when my eyes really lit up.

I have a COMC cart full of stuff. Not sure when I'll make the plunge after the last one took six months. But I'm willing to give it another try.

I need a water-based card.

Yaz hitting the home run is a great card.

I erased some pencil from the front of a 59 Topps card recently and it turned out pretty well.

I like the Gwynn and the Coke and Squirt cards.

Fun batch of cards! I'm adding a few of these to my own wantlist.

Some great Yankee cards in there, like the Catfish Hunter night carter. But the Mattingly is certainly my favorite. Never seen it before. I remember he got divorced a while back. And at least one of the kids, maybe both, played in the minors.

I've heard a lot of talk about the Project 70 cards (who hasn't?), but had never heard anyone mention their thickness before. I don't think I'll ever be inclined to buy one, but it's good to know that it won't fit into a binder if I did.