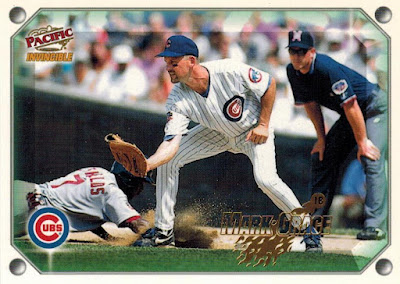 Why do we collect the things we do?
A seemingly innocuous question with billions of different answers. Whether it's a team, a player, a set, or anything else, there had to have been that one A-HA! moment when the lightbulb lit up and we decided, yes, that's something I want to devote my time and money towards. But for as many different things as I collect, I'm sorry to say that I haven't retained a ton of those frozen moments in time, those origin stories.
I recently received a king-sized package from Bob of "The Best Bubble" that a gluttony of different things I collect - namely, a new Mark Grace card! I've mentioned many times that Mark Grace is my mom's favorite baseball player, but while that's the main reason he's a top-tier guy for me, I don't think that's why I started chasing his cards in the first place.
I'm sure I saw him excel in a number of games on WGN as a young Cubs fan, but sadly I can't remember 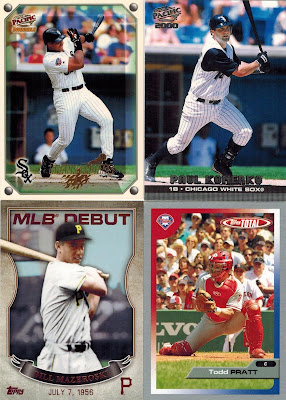 Sure, I collect bigger names like Frank Thomas, Paul Konerko, and Bill Mazeroski, but a lot of the time my most vivid origin stories generally cling to the more obscure - because there can only be so many reasons one would start collecting Todd Pratt.
(For what it's worth, Pratt's a callback to my days of playing a card game called MLB Showdown, had a weirdly good card one year for some still-unexplained reason.) 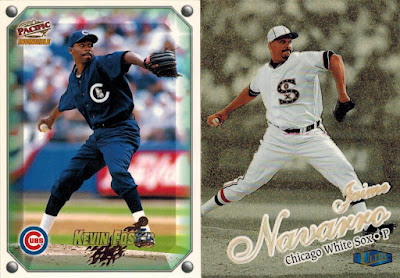 Mini-collection origin stories are a bit vague - I've been hoarding cards with throwback jerseys for as long as I can remember, but I don't recall the exact moment I decided to consciously devote a corner of my collection to them. 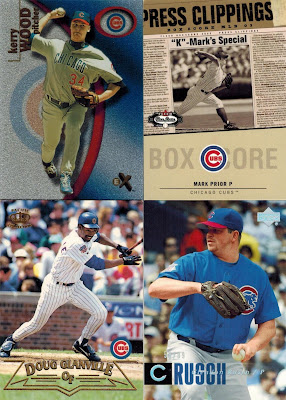 I can't even tell you why I'm a Cubs fan with 100 percent certainty - I actually come from a pedigree of Sox fans on my dad's side. 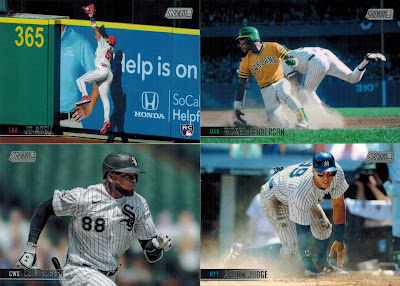 It doesn't seem like a ton of bloggers have had the desire/opportunity to open many packs this year, so it was a nice treat to see Bob take down some of 2021 Stadium Club needs.
(Adell and Rickey have to be Card of the Year nominees.) 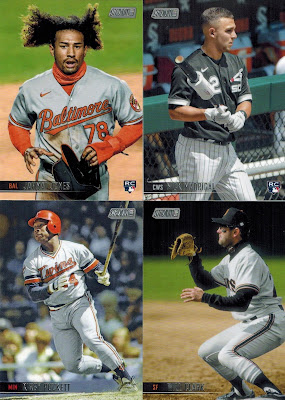 More 2021 Stadium Club, including a terrific Kirby Puckett sighting and a rookie of one of my new favorite Cubs with Nick Madrigal (thanks, Sox!). 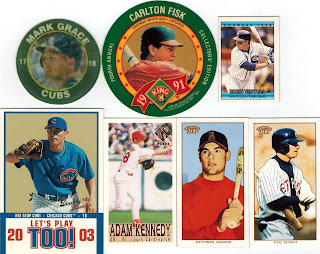 Always up for a weird and wild trip through the world of minis. 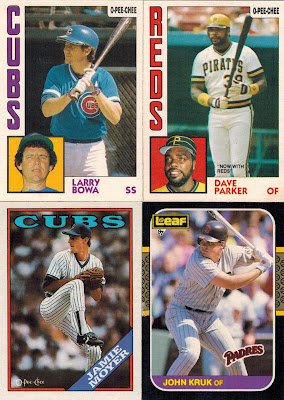 I also don't remember when I discovered how great it was to collect cards from Canada, and that seems especially painful. 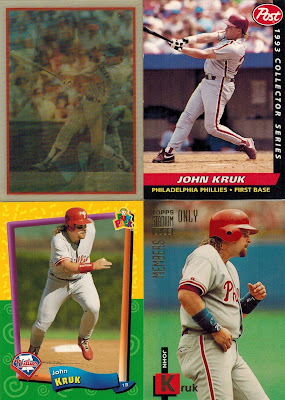 John Kruk is one of those weird guys I've always liked, but never devoted much binder space to until recently. 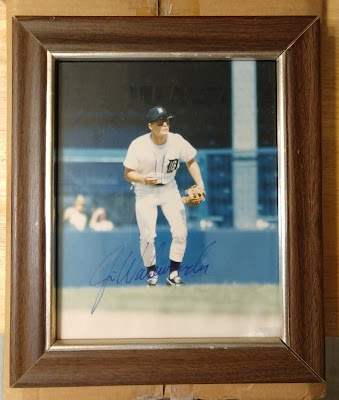 Part of the beauty of having this blog is being able to freeze moments in time -  because of that, I know precisely when and why I decided to start collecting Jim Walewander.
But even then, I didn't think someone like Bob would come along and send me a framed signed photo of the guy(!!!). It answered the initial question I had of why an otherwise standard-sized stack of cards showed up in a huge box.
It also makes me remember the value of a good origin story, and an indicator how special my Jim Walewander collection is turning out to be - signed photos and all.
Posted by Nick at 5:56 PM

Very cool Nick! I don’t remember why I started collecting or how I got back into it. I’m going to have to get that Kirby Puckett card on my next CB order. It’s a gem!

I can't remember why or when my apartment is filled with quack/old medical stuff,,Broadway memoribilia or any of the junk all over.. I just know I love it!

I think Kruk owns a sandwich shop down in Florida now.

Nice Walewander 8 x 10! You might be on to something about Stadium Club, I've seen a lot less of it on the blogs this year compared to past years (but I've also been away for a while.)

Leaf/OPC cards from the '80s are still neat finds for sure.