I'll stick to shopping online, thanks Not sure if this is breaking news or not, but here goes: according to my dad, Target is carrying cards again.
Dad does part-time work as a vendor - you may remember the horror stories he shared last year - and he told me Target's started to call him back to stock sports cards again after the summer-long embargo. He said he's only put out Gypsy Queen and Series 2 so far, but every indication seems to be that they're planning to roll out upcoming releases on schedule, like before.
Is this good news? Bad news? No news? I don't know. I hemmed and hawed for a few days after the initial NO MORE CARDS! announcement, but I can honestly say I haven't thought about buying retail for a while now. And even when my dad told me about the card comeback, I didn't have much of a reaction at all.
As fate would have it, I happened to be at my local Target yesterday for an unrelated task, took a cursory peek into the card aisles, and wasn't really disappointed to see they didn't have anything. 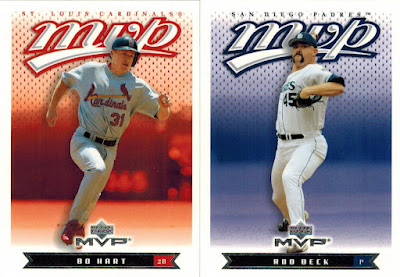 That's because the last few months have shown me something I've always known, but never really put into practice - my money is way, WAY better spent online.
I wouldn't say I've ever regretted buying anything retail. I fully knew what I was doing when I bought those middling packs of Donruss or whatever, and there's a certain thrill to opening packs that isn't covered in price tags. But I've certainly had the thought of gee, what ELSE could I have bought with that $20 I just dropped into oblivion?
I've been able to answer that question over and over again over the summer, and the consensus seems to be an overwhelmingly positive array of treasures, rather than that 783th Marlins card I'll never get rid of. I've mentioned that Sportlots has risen a lot higher on my shopping radar over the past year or so, and I recently received another order that came in at well under the cost of a blaster, causing me to further wonder why I wasn't doing this a long time ago.
I was able to snag a few needs from the 2003 UD MVP Update set that's long since dropped off the face of the earth - including Shooter, perennial collection favorite Bo Hart, and a rare glimpse of Greg Vaughn's forgotten Rockies stint that's been sitting on my Dime Box Dozen list for eternity. 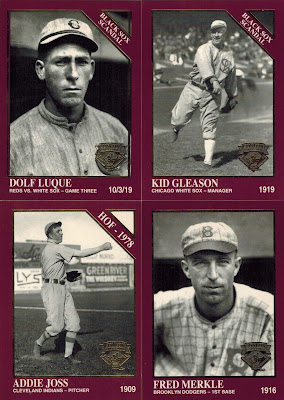 This seller had very little inventory from the past 25 years or so - the fact that he had those MVP Updates was just dumb luck - and a lot of his stock came from the wonderful world of oddballs and team issues.
Conlon is a beautiful enough set on its own, but these burgundy parallels make the gruff turn-of-the-century faces pop even more (and I might add burgundy is a woefully underused border color). 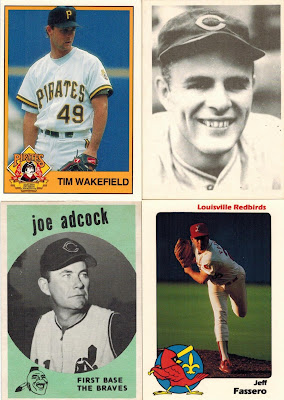 It can be hard coming up with enough cards from a single Sportlots seller to make a purchase worthwhile, but once you stumble upon a dude with stuff like this...man is it glorious.
He had a lot of oddballs I'd never even heard of before - Hills made a Pirates-centric set with Tim Wakefield in it? - and, better yet, almost everything was incredibly affordable. 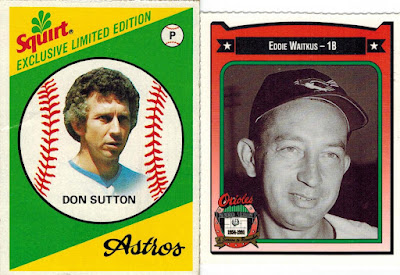 I've lived my life in a lack of Squirt - I don't think I've ever tried the drink and I don't own nearly as many of their cards as I probably should.
You don't see a lot of Eddie Waitkus cards - let me be the 90th different baseball fan to tell you he was the basis for Roy Hobbs in The Natural - and that's the first one I have of him with the Orioles (long live team issues!). 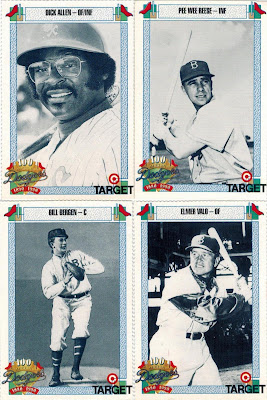 One of the good things to come out of the (first?) baseball card boom of the early '90s was the renaissance of team-issued stadium giveaways, like the seemingly infinite 1990 Target Dodgers set that's darn near a complete compendium of the team's long history.
These are excellent, though I do find it hard to believe they couldn't find a Dodger photo of Dick Allen when they were able to dig up grainy black-and-white stills of dudes who played two games with the Dodgers in 1885. 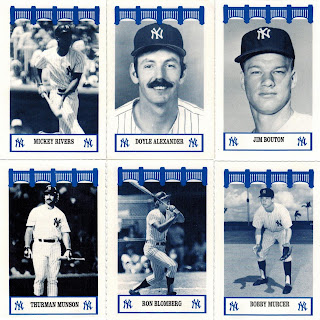 You don't see them as often, but the Yankees also had a similar stadium giveaway in the '90s, sponsored by The WIZ (nobody beats him!).
I don't know if these go as deep into history as the Target Dodgers set did, but between Bouton and Rivers and Munson, these offer a fun chronicle of Yankees greats. 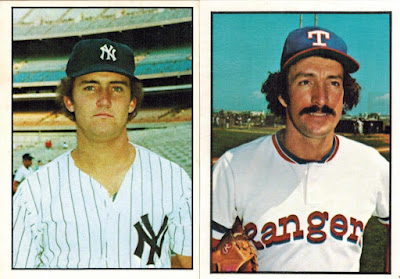 I'm down to needing a few of the huge names from the ubiquitous 1976 SSPC set (Brett, Ryan, etc.), but I don't have a whole lot of the smaller team-issued SSPCs from around the same time.
The Graig Nettles comes from the 1975 SSPC Yankees checklist, and John Lowenstein is my very first card from the 1978 SSPC Rangers set. 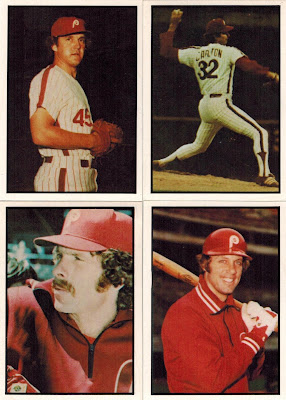 I'm guessing this seller had Philadelphia ties at some point, because he had a whole lot of neat Phillies-centric '70s oddballs up for grabs.
In the wide world of oddballs, nothing quite gets my juices going like the '70s stuff, and that goes doubly so when we're talking someone like Mike Schmidt. 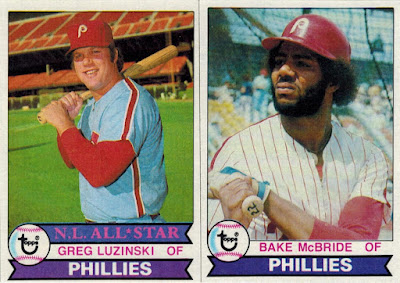 These are actually from the '79 Burger King Phillies set and are basically identical to the standard Topps issues in every way except the card number.
At 18 cents a piece, I wasn't gonna pass these up, but I freely admit that I don't chase the '70s Burger Kings that are essentially Topps reprints with any kind of vigor - mainly because there's way shinier jewels to be found in these Burger King cards... 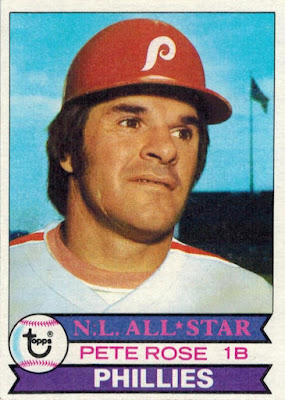 ...like the ones that feature completely different teams and photos!
You'll find a few "updated" cards in the sea of Burger King reprints, and this Pete Rose is one I've had my eye on for a long time. At a whopping $1.99, it was the most expensive piece of the order, but well worth every penny because to me there's nothing quite like the shock of seeing a different on a card you've known for so long. (If I had any kind of artistic ability at all, I could probably draw Pete's regular '79 Topps card from memory.)
So I guess if all the other manics in the card world decide to raid Target aisles again and start fistfights in the parking lot in the chase for that six-figure Ohtani, let them - I'll still be over here buying better cards from the quiet solitude of my room.
Posted by Nick at 5:45 PM

Lots of greats there!!...this week has been ridiculous already,but thankfully Target's infrastucture of security/employees to keep the mob at bay while I stock is back in place!

Funny you mention Target, because I almost bought a couple of blasters online from them last night. I had a deal where I could get 5% off a Target order for my birthday...but it turned out not to apply to Topps products. Plus a non-card related item which I wanted to buy went out of stock, so I ended up ordering it from Amazon instead. Oh, well...as you say, I can probably spend that money on something better!

Hmm, spend money on cards you know you want or need or buy an over priced boxed filled with cards that you have no use for? yeah I'm with you on this one.

Burgundy forever! No Hal Stowe WIZ card? He's my ttm buddy. Although I don't have the card yet either!

Yes to all that, I've said it, too. I miss opening packs but, come on, I just bought two cards from the '60s that have eluded me for years because I was wasting money on the godawful 2016 and 2017 Topps designs. So who cares if Topps is stocking shelves? I have no reason to go there.

Squirt and BK cards are the best of the lot, by far.

I’m with you on the retail stuff. Yeah, it’s fun to open packs but is it really worth spending $20 on a blaster when I could find cards I actually want online? Not really.

Also, two quick things:
1. I’m sure you know this but the threshold for free shipping on Card Barrel goes up to $50 starting on October 1st.
2. I’ve never used Sportlots but I might have to look into it.

I just placed an order on Sportlots. Didn't even think of looking for stuff like Burger King cards from the 70's. Great stuff.

Nice find indeed. Love those all-time roster oddballs. I wish all teams had done them.

Around 2009 I realized that my money was better spent online or at card shows than buying packs. from 2009 to 2017 I probably averaged 1 blaster a year and that's it. (I got a 2nd blaster for my birthday or Christmas some years but since I didn't buy them I don't think they count). Then in 2018 I didn't even bother with a blaster and I didn't even regret it. When blogs were announcing that Target and Wal Mart were no longer carrying cards it didn't even bother me because it was so long since I had bought any.

That's good news if Target is bringing the cards back. For the most part their website only carried the blasters and not the fat packs or hanger boxes, the versions I'd prefer to purchase.

I've been spending a lot more time on the Baseball Card Store and Sportlots as of late, and can't think of anything that could come out of a modern pack that I'd be willing to trade a single one of my recent purchases for.

Was just up at my local Target and they were loaded with Upper Deck Hockey... not much interest as a few days later the same amount of packs were basically there