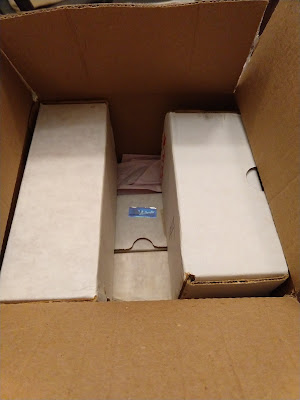 One of the many paradoxes of living in the technological world is that I have a Twitter account without really knowing why I have a Twitter account.
I don't tweet very often - when I do it's mostly to broadcast the rare event of me actually writing a new blog post - and scrolling through my Twitter feed at any given time just seems to give me more anxiety and heartburn. I get a little tired of seeing 937 different arguments about things like PSA grading that are already pointless to me. If you're acquainted with the cardsphere and don't already have a Twitter account, I can't say I'd recommend starting one. The similarities are few, and I personally much prefer it here.
But every once in a blue moon, a prolific and generous Twitterer like @Raiderjoe_FO reaches out and says Hey, I'd like to send you a big box of cards I think you'll enjoy. 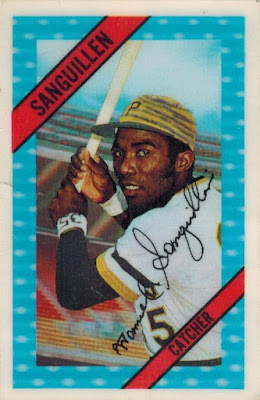 What's even crazier is that this isn't the first time he's done this.
I didn't count, but there had to have been about a thousand cards in the box I received this time around. I honestly felt sorry for the poor postal worker who had to carry this thing up to my doorstep. The fact that people out there are so quick to pick out an insane number of cards for me is nothing short of heartwarming, and proof that there are reasons for a curmudgeon like me to use Twitter.
One of the surefire stars of the lot was this Kellogg's Manny Sanguillen I somehow didn't already have - although Mr. Raiderjoe mainly included it because someone decided to draw little pillbox lines on Manny's Pirates cap. 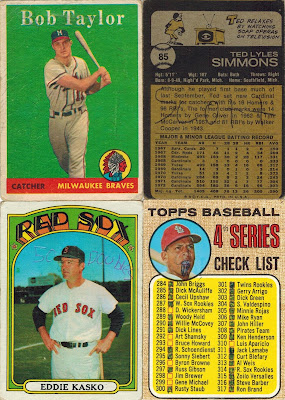 I don't specifically collect written-on cards, but I do think they're a consistently thrilling form of entertainment and wonder. 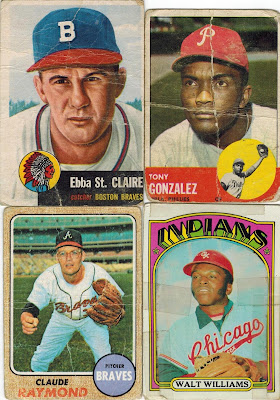 Same goes for "beaters," or generally worn and torn vintage treasures - not anything I've earmarked an entire binder for or anything, but still good for laughs.
That Walt Williams is a real curiosity - a kid cut out the frame of an Indians player and taped it over Walt's regular '72 Topps card to reflect his trade to Cleveland (a pre-Update update!). 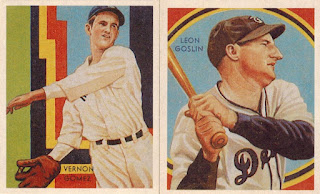 But this box wasn't just beaters and cards with novel past lives - there was a ton of just plain great cardboard in here, too.
I believe these two gems come from an oddball Goudeys That Never Were-ish set - and they're every bit as beautiful as the originals. 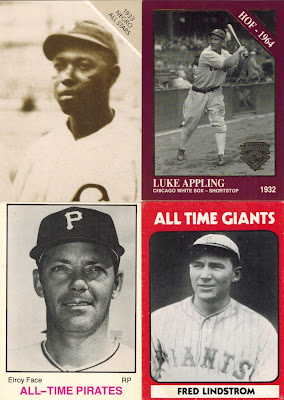 More oddballs, including a Negro Leagues Judy Johnson card which reminds me I just finished reading Only the Ball Was White by Robert Peterson last night - a fantastic chronicle of pre-integration black baseball for anyone who's interested in the topic. 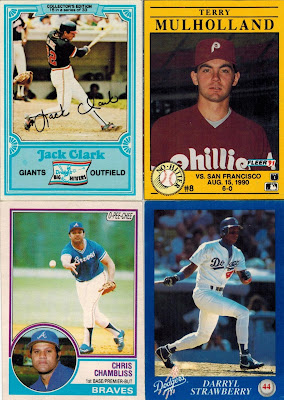 Hitting on all my oddball loves here - (love the) Drake's, box-bottoms, OPCs, and weird team issues. 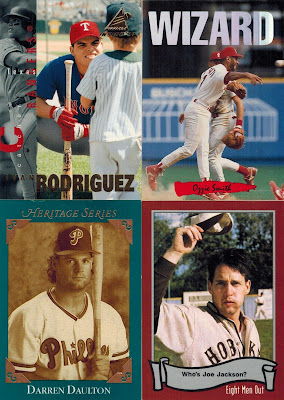 Scavenged quite a few mini-collection hits out of those thousand cards. 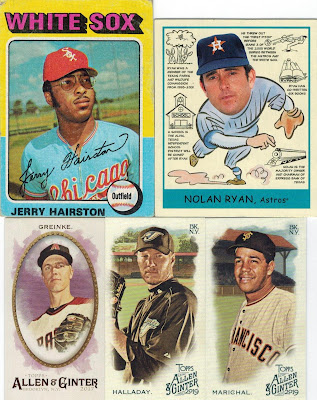 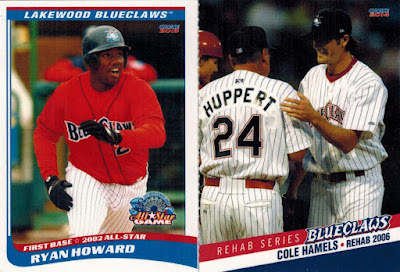 Minor league cards of big-name stars are always a thrill. 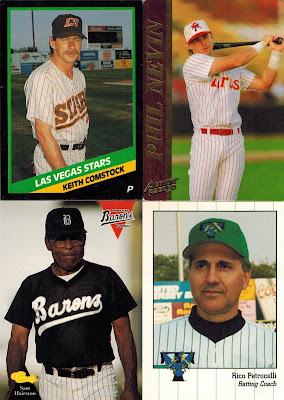 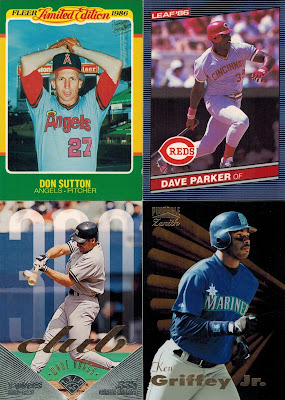 This box might've been good for zany written-on cards and weird oddballs and a lot of other kooky stuff, but that doesn't mean it was lacking in bonafide star power.
(Never realized Don Sutton wore #27 with the Angels.) 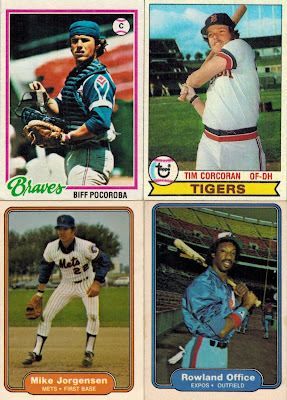 Some late '70s/early '80s fun - love all the automobile sightings on the Jorgensen. 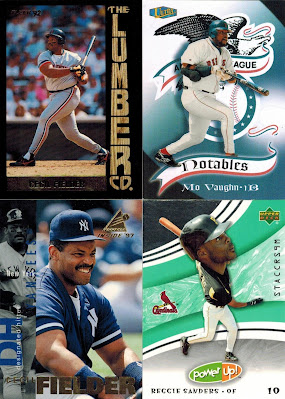 A smattering of other randoms - UD Power Up has to be one of the strangest sets ever made, and I'm still not sure what the point of it ever was. 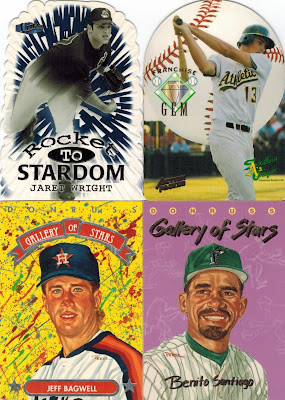 Give me all your colorful and odd-shaped cards. 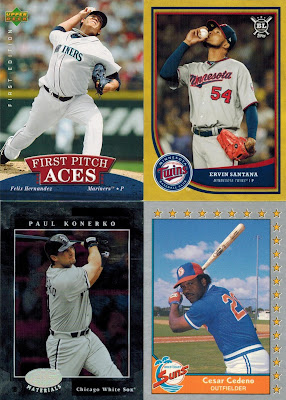 Never bad to send me Senior League cards or Big League parallels - which reminds me, is 2021 Big League ever gonna come out?! 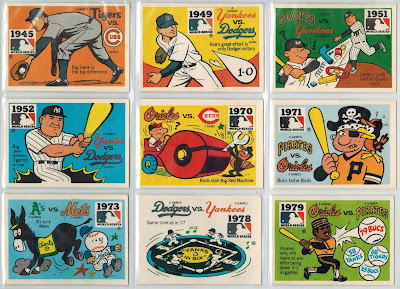 Oh yeah, did I mention this box had a near-complete run of these excellent Laughlin World Series stickers??
I've always felt these deserve way more airplay than they tend to get in the card community - they're fun, colorful, and you can tell there was just a lot of pure joy put into this set. 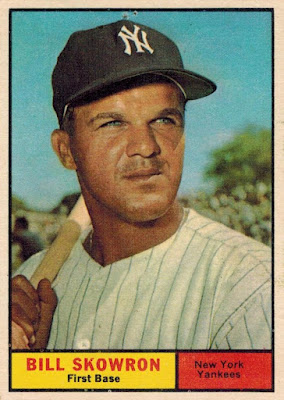 Might as well close with this '61 Topps Moose Skowron if for no other reason than I'd never seen it before, and a quick consult of my big baseball card book showed why - it's actually a scarce SP from the '61 set!
It doesn't happen often, and you might have to scroll through thousands and thousands of what do you think this'll grade posts, but if you stick with it you might just find good folks like Mr. Raiderjoe who remind you that, against all odds, even Twitter has its day.
Posted by Nick at 6:02 PM

I did a double take at that Eight Men Out card. I thought it was a 2014 Topps flagship card at first glance. I always knew that the 2014 design reminded me of something I had seen as a kid, but I never could put my finger on it. One less unsolved mystery in my life.

The WS stickers are fun. Never seen them before.

I've had a Twitter account for years... and outside of receiving a message here or there, I don't really know how to use it. I guess every now and then, I'll see someone throw out an interesting question that I'm tempted to answer (but rarely do).
Anyways... this was a pretty awesome care package.

As always with posts like this, there are too many great cards to succinctly comment on... but I'll say that I love any 'lesser grade' card that demonstrates that the card was loved at one point. Cards that are 'branded' with the original owner's name is one kind of that. I especially like the Walt Williams because I'd done the very same thing with one or two 1975 cards :-D

So many great cards here. My favorites are Pudge Rodriguez and the well-worn vintage.

Yup, Raiderjoe is the man. I don't know how he comes up with all the stuff.

Loved the post. A box like that would be a treasure hunt...and lookey there..lo and behold a Biff Pocaroba...one of the best sports names in history...any sport, and a guy I have a mini collection going,,but don't have that one...lol.

Congrats on the new job as well...conjuring an Illinois-bound package as we speak.

The variety you end up with never ceases to amaze me.

There is way too much slab talk on Twitter, and it only seems to be getting worse!