My LCS says these cards are worth eight cents 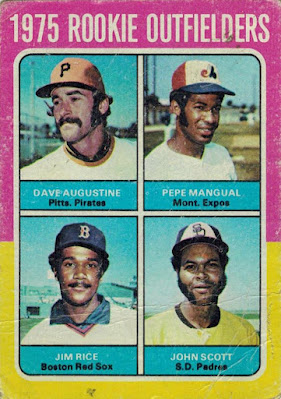 Does this look like an eight-cent card to you?
It shouldn't. That is, after all a '75 Topps Jim Rice rookie card (and three other dudes who had the misfortune of appearing on a Jim Rice rookie card). But if you ask the guy in charge of pricing cards at my local card shop, well, then I guess he'd tell you this is an eight-cent card, because I found it in a 15/$1 box during a rare trip to the LCS a few weeks ago.
I've talked about this card shop before - they certainly have a monstrous inventory of cards, but the problem is 99 percent of them are behind the counter, and the guys working there always seem to be busy with something. I don't love having to ask for cards in the first place, and that goes doubly so if I feel like I'm interrupting someone's work - the last thing I ever want to be is that person who inevitably asks six questions while I'm obviously in the middle of three different things (it's happened at every retail job I've ever had).
The 15/$1 cards are literally the only singles open for public browsing in the whole store - but I guess if you're gonna put Jim Rice rookies in said 15/$1 box I can't really complain much. 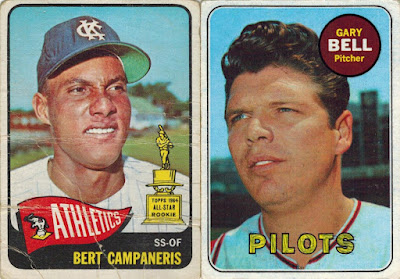 I had some time to kill after work a while ago (back when I still had a job) and decided to take a trip to the LCS - I found the Rice rookie within about two minutes of walking into the place.
That alone would've been enough of a surprise, and things got even further out of hand when I found a Bert Campaneris rookie and one of the few Pilots cards I didn't already have in there as well - I already own a copy of that Campy, but I just couldn't leave that one behind for eight cents. 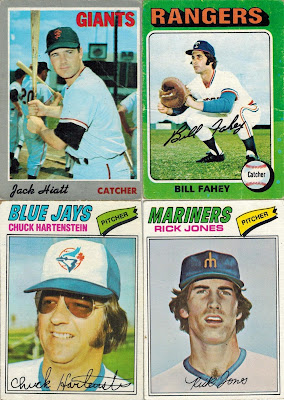 This isn't an LCS I see myself frequenting much now or ever - they had marked-up 2021 blasters on proud display in the window, which should say enough - but it's the closest one to where I live so it's good for a trip every year or two.
Condition seems to be a make-or-break basis on how they price their cards, which the Rice and Campy RCs obviously show. The 15/$1 boxes were mostly stuffed with off-condition and/or no-name '70s commons, which is terrific for me since I'm constantly working on gathering some of the quirkier icons of that decade for my frankenset.
I'm always a sucker for a good catching pose, and are we sure Rick Jones wasn't just a comic-book drawing that somehow snuck onto a baseball card? 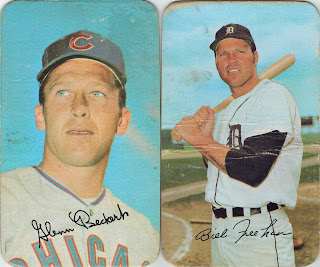 It's probably an oversight on my part, but neither Glenn Beckert nor Bill Freehan are "binder guys" for me - but again I can't pass up Topps Supers for eight cents (please inquire within if I can find these a good home somewhere). 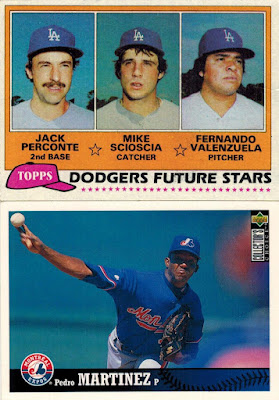 Multi-player cards have never really been my thing, which explains why I didn't already have the aforementioned Jim Rice rookie, or the Mike Scioscia(!)/Fernando Valenzuela(!)/Jack Perconte(?) RC you see above.
For eight cents, though...GIMME. A few newer items from the 15/$1 boxes - I think someone spilled a soda or something while sorting those Boggs and Ozzie Smith inserts, because there's an ever-so-slight bit of goo at the top edges.
Your accident, my gain. 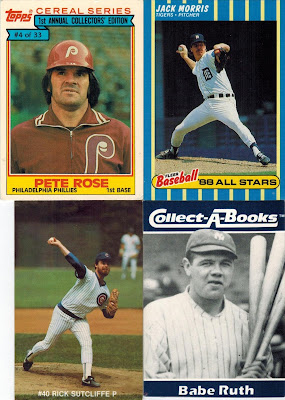 One of the things I love about baseball cards is that there is almost literally nothing else in the world you could actually buy with eight cents in your pocket.
But in this hobby, if you're lucky, you might find some neat oddballs for that nickel and three pennies. 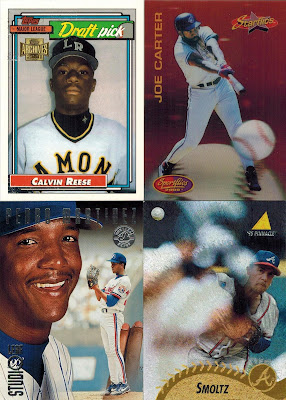 The last of the eight-cent randoms - the Smoltz is a neat Dufex paralle, and the Reese is actually a reprint of his '92 Topps rookie, which that has to be the only Pokey Reese reprint ever created. 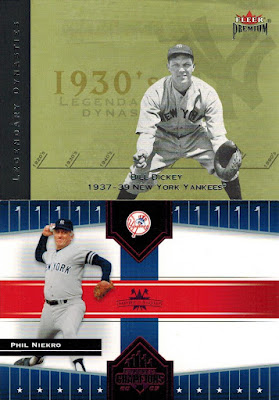 As I said, most of this store's inventory is behind the counter - I swallowed my anxiety and flagged down the guy working there to dig through a few of the random boxes of HOFers they keep under the glass case.
I did this because, from what I've seen in my couple trips here, the prices on their cards are actually pretty fair - almost everything you'll see in the rest of this post cost between 50 cents and a dollar, which isn't bad at all given some of the prices I've seen at other LCS's in the past.
I didn't have a ton of money to spend, so I kept my purchases to more of the off-kilter stuff I'm not likely to find out of the blue - not every day I get to add Bill Dickey or Yankees Phil Niekro cards to my binders. 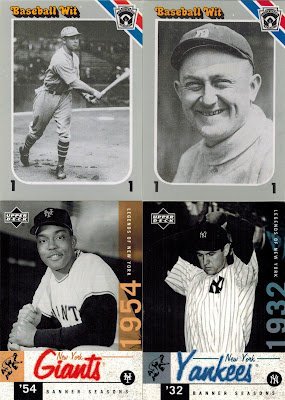 A few more 50-cent HOFers, and a reminder that that one-off UD Legends of New York set sure produced some nice-looking cards. 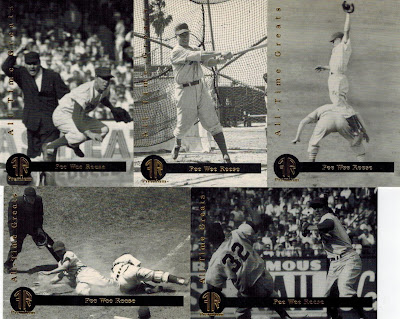 If you go by sheer value, a buck a piece for these Pee Wee Reeses wasn't a giant steal or anything.
But if you go by pure enjoyment, it was sure a bargain, because there aren't many double play and/or play at the plate Pee Wees in existence. 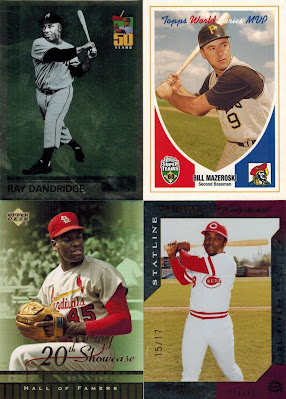 Three 50-centers, and a buck for the Joe Morgan - I think someone made a blunder on the latter because I doubt a HOF card numbered to 17 copies(!) should be priced that low. 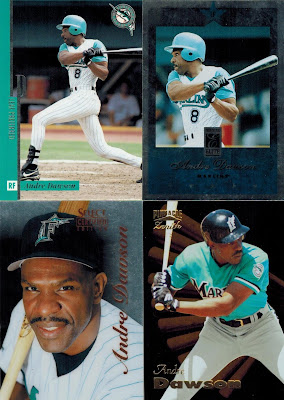 Marlins cards of Andre Dawson make me cringe, and yet I can't stop myself from buying them - as is the paradox of being a weird-uniform collector. 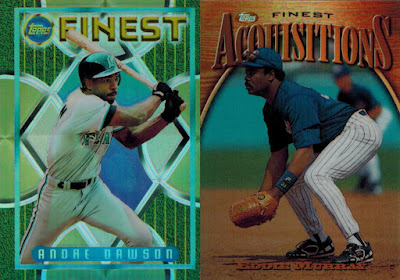 You can probably count the number of '90s Finest refractors I own on one hand, which is why I had to jump at these for 50 cents a pop - and yes, that's another Marlins Andre Dawson sighting, as well as an equally jarring look at Eddie Murray's brief Angels career. 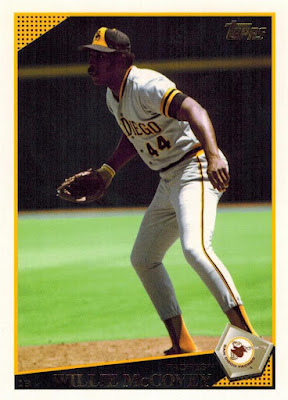 The big purchase of the day was this Willie McCovey legend variation, which I plunked down five whole dollars for.
Two reasons: 1) McCovey on the Padres is, again, another weird combination that I've never gotten used to seeing, and 2) I'm begrudgingly infatuated with Flagship short-print variations. It's a card that would've been easy to pass on if I saw it for five bucks online, but once I had it in my hands I knew I couldn't let it go. A fitting end to a strange and productive trip to the local card shop.
I can only hope the guy who owns my LCS doesn't read this post and come to his senses.
Posted by Nick at 5:59 PM

Really great deals!! All good, but the ones I would have jumped at the most are the Topps Supers (8 cents? Really?) and the awesome Finest refractors!

Nice haul! I would have easily paid a buck for a Mike Scioscia/Fernando Valenzuela RC!

Those are some great deals. It's pretty crazy to get a hall of famer #ed to 17 for a buck.

Yeah, that Morgan, deal and a half.

I, quite frankly, have never been to an LCS where you could find 1977 Topps commons.

But I did get a '61 Maris for 7 cents once, so not everything happens in the greater Chicago area.

Man, when I've gone to local card shops near me, not only do they not think that off-condition HOF rookies from the '70s are eight cent cards, they don't seem to think that ANYTHING is an 8 cent card, or a dime card. At *shows* around here (Northwest New Jersey) I do very well with the dime-or-less boxes, but the stores I've been to don't have them. If anyone knows where I can find one somewhere near me, let me know.

I like the Rose & Morris oddballs, and whatever that Ozzie all-star card is.

That box sounds like it would be worth many trips back. Great eight cent finds! If no one else wants those Supers, I'll find something to trade you for them.

Fantastic finds! The McCovey and Morgan were great bargains but the Pee Wee Reese cards, Rice RC, and other oddballs were certainly worth the trip - and the hassle of 'disturbing' the workers, smh.

Outside of junk wax, it's hard to find fault with any cards for 8 cents.

Those fuzzy UD New York card are kinda weird... but I do need a bunch of Mets from that set.

I'm not sure I'm correctly understanding your "inquire within" comment, but if you are looking for a home for those Supers, I would promise to welcome those into my collection. No worries if I'm misunderstanding, but I figured I'd speak up just in case.

Man, a Jim Rice rookie at that price? That's amazing, even with the condition! Congrats on getting so many great cards!

Congratulations on landing these awesome finds! Rice and Campy rookie cards for 8¢? That's the stuff collectors like us dream of.