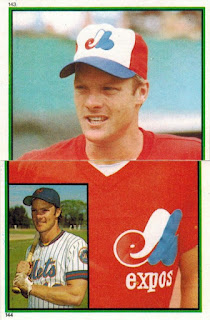 "Well a person can work up a mean, mean thirst / after a hard day of nothing much at all..." - The Replacements, "Here Comes A Regular"
I'm still jobless as of this writing, and next week I might well become the first and only unemployed person to ever attend The National.
Even without a job, I've managed to bolster my savings a bit by selling off a few unneeded childhood treasures (people still buy Game Boys?) and dabbling in the book re-selling business. Honestly for the last month or so it's been refreshing to take a brief sabbatical from the dull work-a-day world. Another job no doubt awaits me, but for now I'm content to reset and not jump into anything.
And after weighing the financial pros and cons I've decided that, yes, a trip to The National is indeed in the cards (pun intended) - I'll most likely be there next Thursday to try to beat some of the weekend crowd. 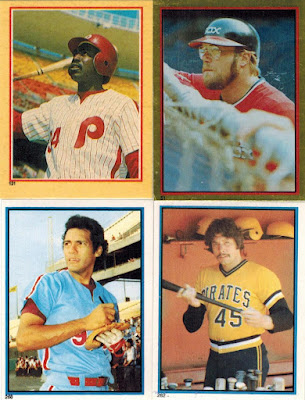 I've talked about this a few times before, but despite my excitement, I have mixed feelings about The National and what it represents about card collecting - and that goes about tenfold this year, smack dab in the middle of a Hobby Boom.
It's a strange feeling to critique and/or be disgusted with a community that I myself am a part of. I've worked up a mean, mean thirst for The National ever since it was cancelled last year - you can't argue that it's not the best card show around. It just is. But I'm fully ready to see dudes with plutonium-locked briefcases opening boxes of cards with gloves and NFT bros and whatever other godforsaken get-rich-quick schemes are being peddled this year.
The sad part is that this is all that seems to get advertised about The National. No one mentions the unbelievable dime boxes and discount vintage that make this so fun for collectors like myself who represent about 0.0001 percent of the show's income. The sheer fun of The National for the collector often gets lost in the convention halls, tucked away into the corner.
It's always interesting to see what the cheap stuff is like at such a cash-fueled show like The National - and I'm wondering if it'll look anything like the excellent package I received from a loyal reader named Wes W. who's been shoveling stacks of cards on me for years now. 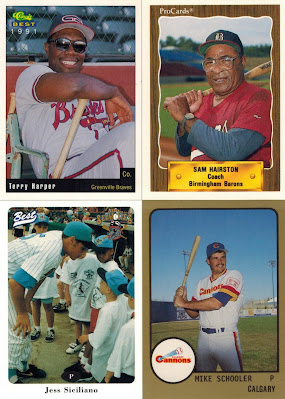 Minor league cards are great for a lot of reasons, not the least of which because of how wacky and entertaining they can be.
(You can't convince me Stan Johnston & Walt Vanderbush weren't in Witness Protection.) 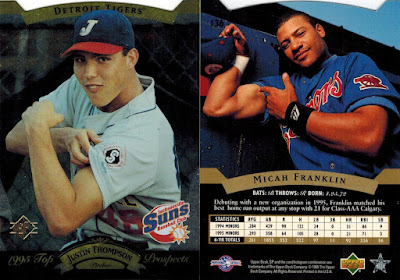 Like dudes in their early 20s need any excuse to flash their guns. 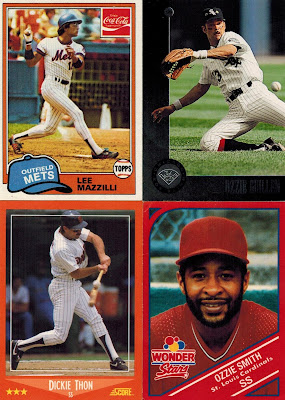 A few other randoms from Wes, including an Ozzie Smith that has me wondering how long it's been since I've had a slice of Wonder Bread (at least a decade). 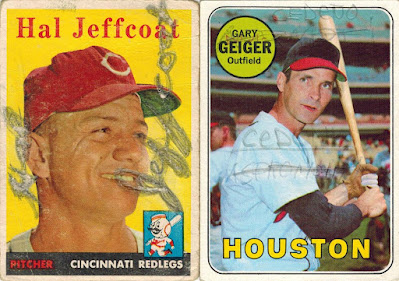 Wes also sent me a handful of scrawled-upon cardboard, and while I don't specifically seek these out, I'll take any people are sitting on because I find them immensely entertaining.
They're also liable to open a Pandora's Box of mysteries - such as why that faux-Hal Jeffcoat signature is etched so deeply into that card, or what kind of cataloging was going on with that Geiger. 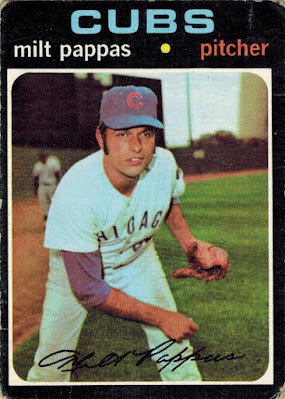 I try to be thorough with every trade package I receive - which why, for curiosity's sake, I flipped this '71 Milt Pappas over to take a look even though I already had a copy.
I'm glad I did, because staring out at me from the other side was... 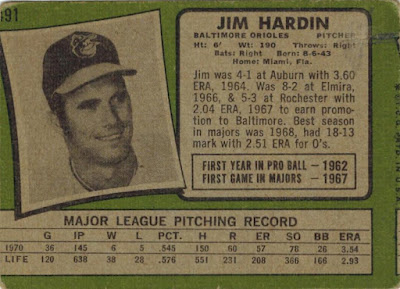 ...some other guy!
I have a few of these mismatched vintage cards, and like the written-on ones, I find them fascinating. For comparison's sake, I once found a beaten-up '59 Topps card under a bench at the train station after a day at The National. It wasn't even worth someone's time to put it in a garbage can. Think about that. (Oh, and I still have that '59 Topps card.)
To me, collecting isn't only about hoarding stuff I need. It's about learning to enjoy the hobby as much as possible, seeing where it's come from and where it's been. I think some of that is gonna be lost in the crowd I'm bound to see next week - like the latest-and-greatest wrapper redemption booths that seem to run on money and mob mentality. There's a ton of tables at The National that I have no problem passing up...but there's also a whole heckuva lot of fun stuff I wouldn't miss for the world (job or no job).
Because as hard as it might be to believe, there's actually more to The National than what gets advertised - you just have to look a little harder to find it.
Posted by Nick at 5:50 PM

One of the best purchases I made at the one National I went to was a 50 cent purchase of the "Large San Diego" version of the 1974 Rookie Pitchers #599... It finished off my 1974 master set, and was from one of those discounted dealers pretty far away from the high-priced action.

(BTW, the Pappas/Hardin card is awesome!)

Really looking forward to attending with you,bros be damned!

Go have a blast Nick!

Have fun. I hope you find dozens of some boxes and find some great deals.

I have a football card that's Limas Sweed on the front and Justin Forsett on the back.

Good luck at the show. The low-end dealers need love too.

But I'm fully ready to see dudes with plutonium-locked briefcases opening boxes of cards with gloves and NFT bros and whatever other godforsaken get-rich-quick schemes are being peddled this year.

Have fun! I was able to dig through a table of early 90's inserts a few years back. I wish I could find that dealer again.

I'm excited, as there are things at the National I will never see anywhere else. However, I will be right next to you at those dime boxes. For me, I'd rather come home with a large stack for the collection than one big purchase.

Looking forward to seeing what you bring back!

That would be the most exciting thing to see what you bring back.

I would imagine that there will be quite a few "jobless" guys attending The National this year, probably spending a lot of money that they don't technically have either.

"The fool who wastes his life, God rest his guts" what a great sing by a great band.

I hope you have a blast. It's been a long time since I've been to a national but hopefully there are still a bunch of sellers with vintage bargain bins.

Definitely on the same page as you here. Haven't been to the National, but guessing my reaction would be the same. Incidentally, I don't think I have any idea what a wrapper redemption booth is. LOL

I'd love to make it out to the National one day... mainly to look through bargain bins, maybe meet some fellow bloggers, and cross it off my bucket list.

As for the hobby... I've accepted that people collect for different reasons and as long as they aren't going out of their way to hurt others (like running scams), then I can deal with it.

Have fun! Hope you're able to find some nice stuff for your collection.