My favorite players, from A-Z 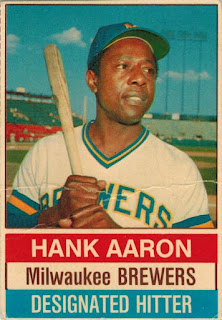 As you probably know by now, there's a bat-around challenge going on, asking us bloggers to pick our favorite ballplayers from letters A-Z.
The topic was originally thrown out over at "The Diamond King," and it's a fun topic that sent me scurrying to my binders and scanner to partake in. Still, there's a part of me that's wary of making lists like these for two reasons: a) I'm paranoid about forgetting someone obvious, and b) some of the guys I had to choose between for certain letters seemed unfair and made me downright anxious. But anxiety be darned, because after quite a bit of trepidation, the list has finally been finalized.
In the spirit of this blog, I'm trying to show some of my favorite A-Z dudes in their more unfamiliar uniforms (where applicable) - so ready or not, here we go. 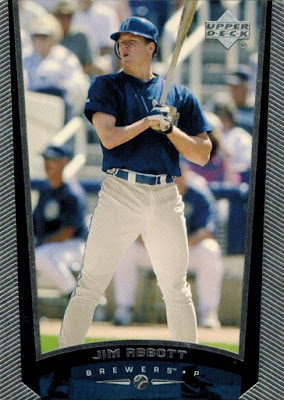 A: Jim Abbott
Aaaaaaand of course the very first letter of the alphabet produced one of those aforementioned battles that gave me heartburn - I kinda assumed Hank Aaron would be my "A" guy without much of a fight...until I remembered Jim Abbott.
Hank has gotten the nod on almost every one of these lists I've read, and rightly so, but I have to go with Abbott here because he's one of just a handful of ballplayers I consider a bona-fide hero. 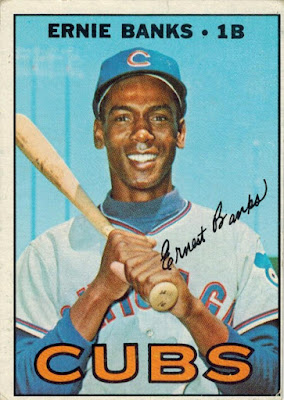 B: Ernie Banks
With apologies to Johnny Bench, I can't vote down Mr. Cub. 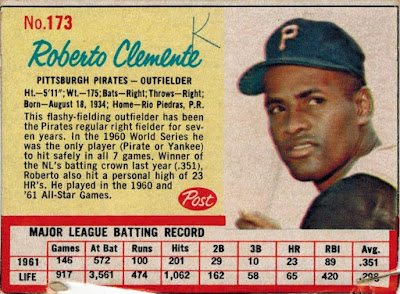 C: Roberto Clemente
My all-time favorite ballplayer, and lightyears ahead of any other "C" despite the presence of stalwarts like Rod Carew and Ty Cobb. 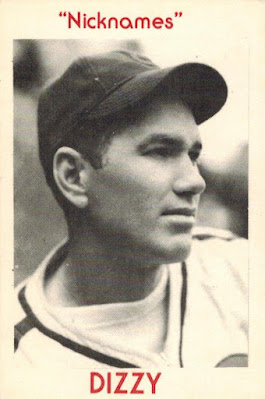 D: Dizzy Dean
One of our cats is named "Dizzy Dean," which should help explain why Diz made my list without much of a fight. 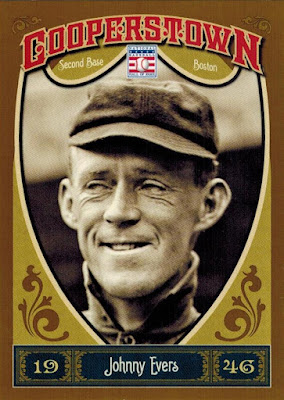 E: Johnny Evers
One of the weaker letters in the baseball alphabet, so I'm taking a ride in the wayback machine and going with Johnny Evers here.
Evers was famously nicknamed "The Crab" for his less-than-jovial personality, and his cards seem to bear that out - this is one of only a couple I own that show him cracking a smile. 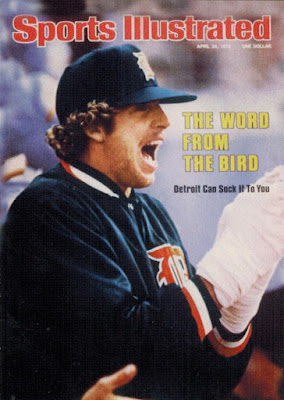 F: Mark Fidrych
I could've easily posted one of my Red Sox minor league cards of The Bird, but as far as I know I've never showed this SI cover card on the blog before, which seems obscene. 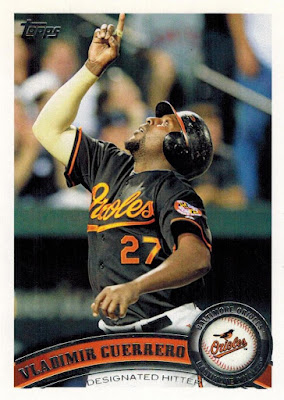 G: Vladimir Guerrero
The most painful letter of the alphabet for this baseball fan.
Vlad gets the nod - he's long been my favorite player of my baseball lifetime - but it's agonizing to leave off other biggies like Tony Gwynn and Mark Grace. 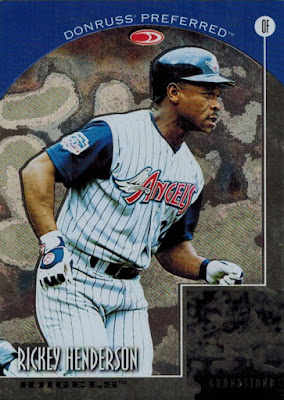 H: Rickey Henderson
Rickey is the dream for unfamiliar uniform collectors like myself - it almost seems like he wore a jersey for every letter of the alphabet. 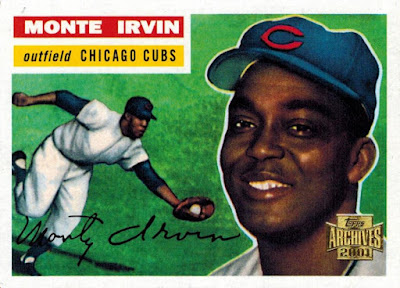 I: Monte Irvin
A mediocre cast of "I" players is saved by Monte Irvin, who by all accounts would've been one of MLB's greats had integration come along a few years before it did. 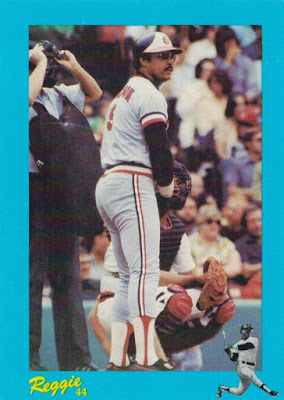 J: Reggie Jackson
As if I needed an excuse to show another Orioles Reggie card. 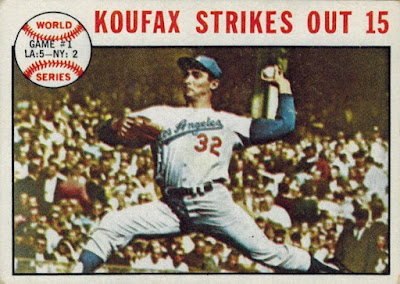 K: Sandy Koufax
An easy pick, even though I feel bad having to leave Paul Konerko and Clayton Kershaw off the list. 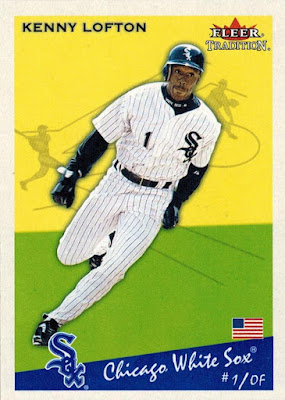 L: Kenny Lofton
One of the rare instances where a hometown uniform is classified in my mind as "wrong" - I remember Lofton's brief stint with the Cubs in 2003, but I have no recollection of his stay with the White Sox the year prior. 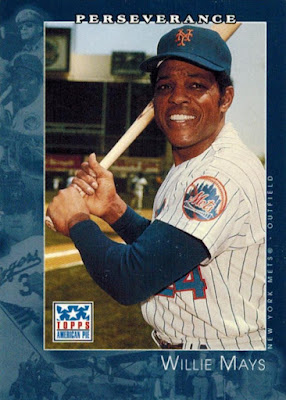 M: Willie Mays
Basically a "1a" and "1b" heat between Willie Mays and Stan Musial - I give the ever-so-slight nod to Mays right now, but if I did this list tomorrow it might well be Musial. 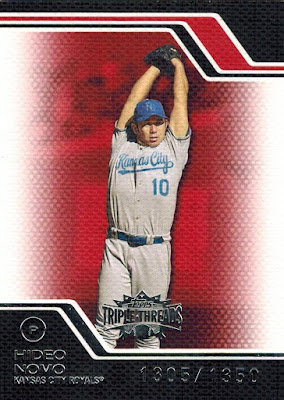 N: Hideo Nomo
As I went over my choices one final time, I realized how legend-leaning this list turned out to be, which I suppose makes sense because it takes a while for players to lapse into the annals of the baseball fan's mind as a "past great."
Hideo Nomo's heyday doesn't really seem that long ago to me - I have vague memories of watching him as a young fanatic - but that didn't stop him from cracking this list with relative ease. 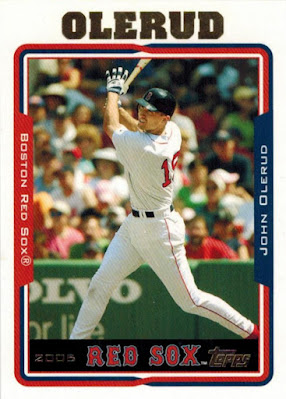 O: John Olerud
"O" turned out to be a surprisingly difficult letter - despite strong pushes from Al Oliver and Shohei Ohtani, John Olerud takes the crown. 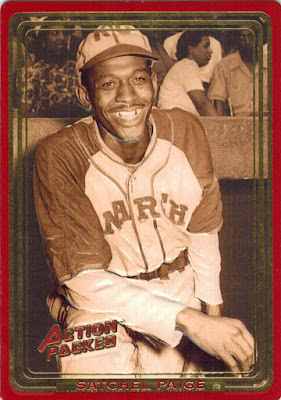 P: Satchel Paige
If a genie granted me a wish to go back in time and watch one, single baseball player, there's a good chance I'd use that wish to see Satchel Paige pitch. 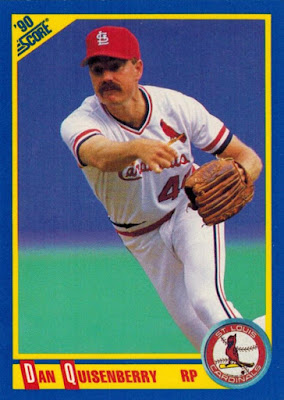 Q: Dan Quisenberry
Any ballplayer-turned-poet is cool in my book. 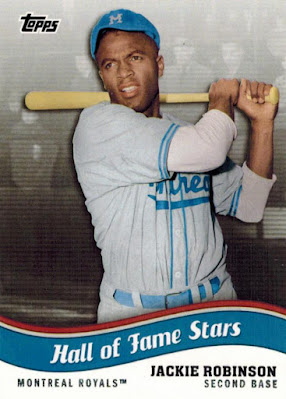 R: Jackie Robinson
How could it not be? 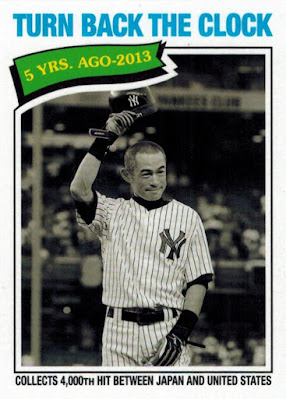 S: Ichiro Suzuki
I was tempted to slip Ichiro into the "I" slot, but baseball players aren't like Sting or Cher - they have last names, and I like to use them. 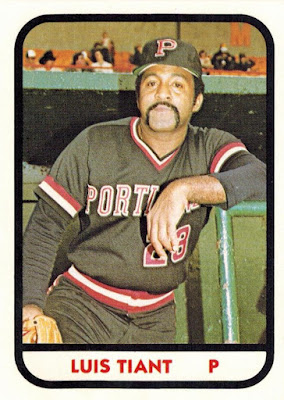 T: Luis Tiant
"T" is a battle between two quirky favorites of mine, with Luis Tiant getting the slight nod over Kent Tekulve. 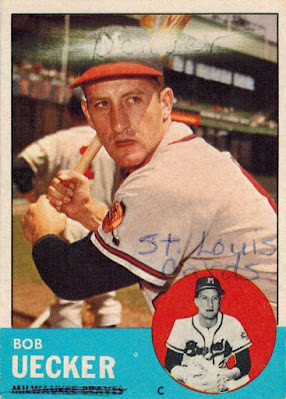 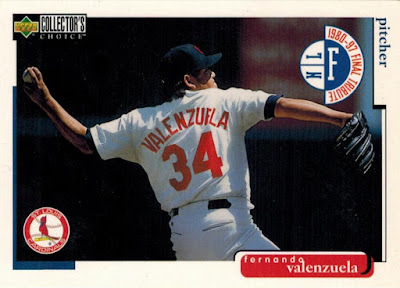 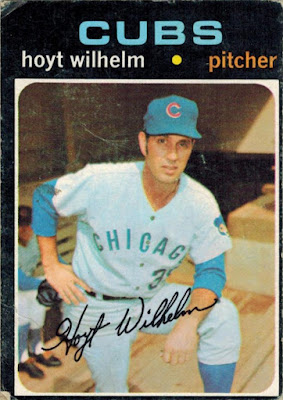 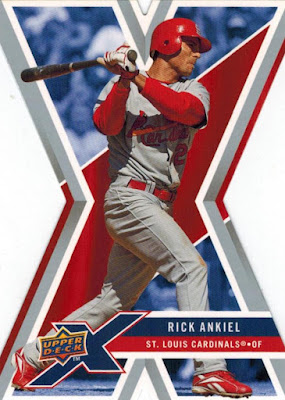 X: N/A
The '90s and aughts produced an inordinate amount of baseball cards shaped like X's, probably to make up for the fact that no big-leaguer has ever had an "X" last name (yet). 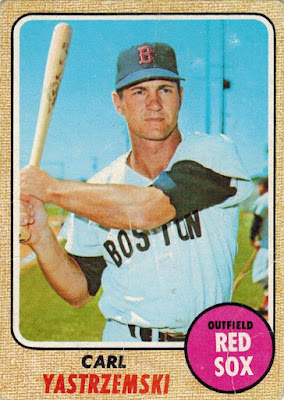 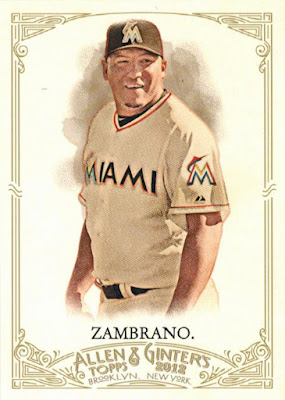 Z: Carlos Zambrano
I was a bit lukewarm on Big Z during his playing days, but I've come to appreciate him way more in the years since - I specifically miss watching him hit, which isn't something I can say about most pitchers.
So there's my romp through the baseball alphabet - and I'm fully prepared for that moment I know is gonna come about a week from now when the lightbulb goes off and I say OH CRUD, I FORGOT [insert incredibly obvious name here]!
Posted by Nick at 5:30 PM

One of the things I find interesting about this exercise are the different things which make players someone's favorite.

Several of your picks got consideration from me, but I'm not changing anything.

There's part of me that also wants to do an A-Z "Most disdained player" list, but since I don't maintain binders and wantlists of such players, it's likely more trouble than it's worth. :-D

People are getting sick of me mentioning it, but the anti-Phillies bias in the blogosphere is really effing annoying.

At least you got Fidrych and Jackie.

I'd agree with at least half of these (now I have to do a list!) and nice save on the "X" slot!

What an amazing list...well done!

We matched a lot.

That Ty Cobb mention threw me.

I keep meaning get that Fidrych card.

Love the Nomo pick... wish I would have chosen that one.
Also, I had to do a double-take... I could have sworn that was Lance Johnson (who also wore #1) and not Kenny Lofton. I had no idea Lofton played for the Sox.

I feel like we had a lot of names in common compared to other lists I've seen. Didn't even consider Paige... but I like that pick.

My ex was a huge Zambrano fan... so when I first returned to the hobby, a lot of my trades involved him. I should go back to Sports Card Forum and search up all of those trades. I'd hate to see what I gave up since that relationship is one of the few in my lifetime that didn't end well. Lol. I wonder if she still has those cards.

I finished my list about a week ago and also thought I might forget someone, but so far so good. Although I probably could have gone with Nomo instead of Niekro.

First, love that Abbot card! Also, we matched on 10! That might be the most so far. And you are the first person after me to pick Willie Mays, that blows my mind!

I feel the same way about Big Z.

Ooh I need one of those Tiants!