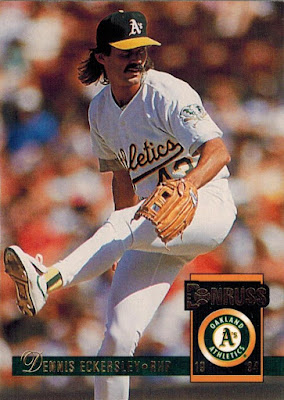 Mixed news from Dime Box HQ this week: I quit my job on Monday.
I said it before I started this job, and unfortunately I have to say it again: I'm not thrilled with the pattern my work life has taken as an adult. I've had four different jobs in the past four years and I'm starting to feel like a rubber-armed free-agent reliever who keeps jumping from team to team. But even so, I have no regrets about leaving this place - without going too far into it, I worked for a controlling and poisonous boss who made work miserable. Basically the last thing I thought I'd encounter at a job where all I did was price antiquarian books in a warehouse - yup, it sounded relaxing to me, too.
This is the first time in a while that I've left a job without having anything else lined up, and that's a bit scary, but the weight I feel lifted off my shoulders right now tells me I made the right decision here. 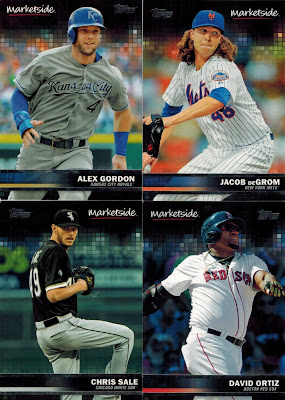 A friend and I are looking fairly seriously into moving up north to Milwaukee very soon, and if that takes a little longer than expected, I've been tentatively offered jobs by a couple of my ex-managers at my old Half Price Books job, which isn't my ideal result of all this but a nice cushion nonetheless.
For the very near future, however, I've got at least a few days off from the work-a-day world, and finally a bit of time to catch up with the piles and piles of baseball cards that have been accumulating in my room. Working a mentally exhausting job really makes me feel like I've neglected my hobbies, which shows from my one-post-a-week schedule and the gads of old scans sitting in my trade folders. For example, I'm far too late in acknowledging a couple PWEs sent me from a reader named Dave who's been mighty generous with me lately.
In addition to the former Dime Box Dozen Eck at the top of this post came a quartet of these neat Marketside oddballs, which I never did see when they were released and haven't appeared with much frequency in the years since. 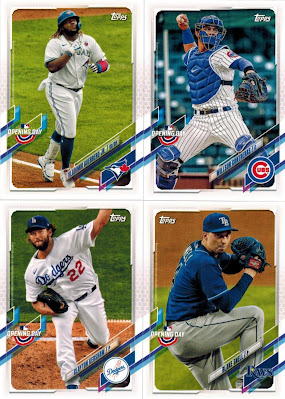 Blogging stalwart Joe Shlabotnik of "The Shlabotnik Report" helped me cross a few 2021 Opening Day numbers off my want list - this was, for better or worse, the last set I bought off Target shelves before they killed the card aisle. 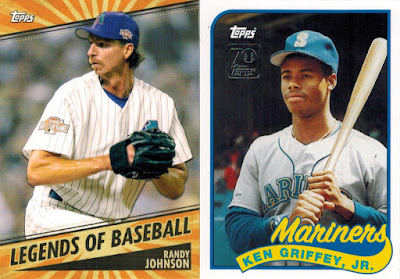 "Joe" also sent along a couple 2021 insert needs, including about the 474th different '89 Topps Traded Griffey reprint in my binders. 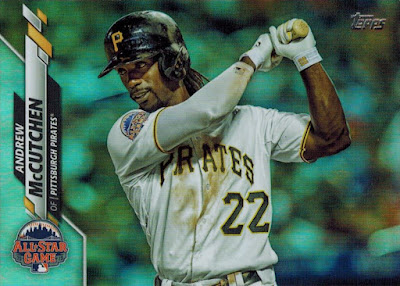 Julie over at "A Cracked Bat" appears to have taken a hopefully temporary blogging sabbatical as of late, but she was nice enough to send over a nice batch of cardboard from her Pick Pockets program before the hiatus.
One rule in this house: I'll never turn down free Andrew McCutchen cards. 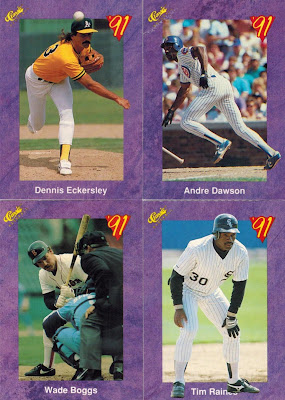 Classic sets are weird - some I feel like I've seen ten million times, and others, like these, somehow went completely unnoticed by me all these years later.
I believe these are from the '91 Classic Update series - there's way too many different Classic sets for me to keep track of - and I didn't own a single card from this set before Julie put these up for grabs. 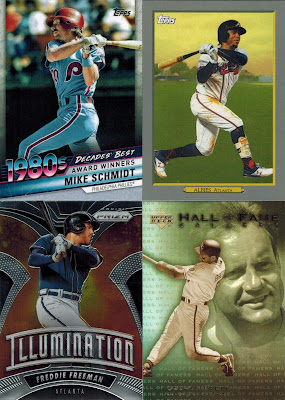 A few more random Pick Pockets from Julie, including one of the seemingly infinite "Decades Best" inserts I still need. 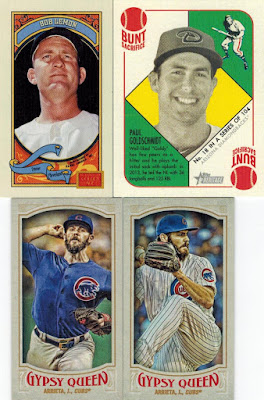 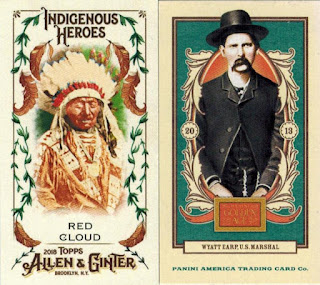 Bob of "The Best Bubble" sent a surprise package my way recently, one that included a couple excellent minis for my non-baseball collection.
It's been tough finding those non-sport A&G minis the past few years, which makes me mighty happy when any happen to fall in my lap. 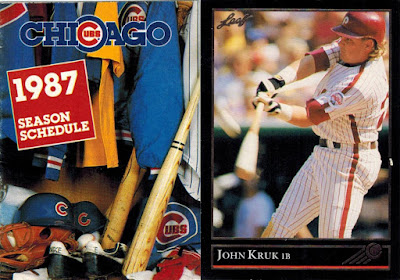 Two things I ignored for a long time: pocket schedules and John Kruk cards.
I'm still not a huge pocket schedule guy (though I'll gladly take any Cubs ones), but Kruk has catapulted to near the top of my player collection hierarchy in short order. 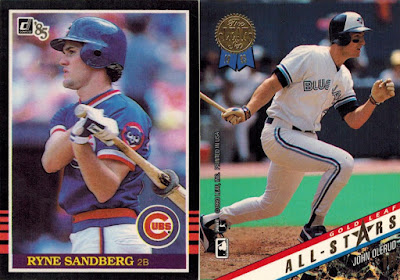 Finally comes the spoils of a couple different PWEs I received from Jeff of "Wax Pack Wonders" in recent months, including a former Dime Box Dozen suspect with that Sandberg.
I somehow had Ryno's box-bottom from '85 Donruss, but not the standard base card.- can you hear the sigh of relief I just heaved? 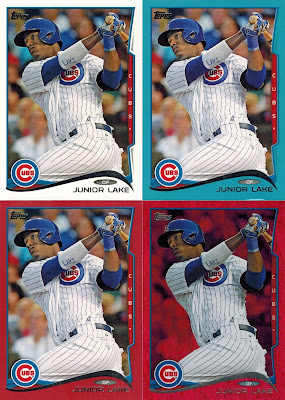 I love when readers pay attention to some of my quick comments: I mentioned my outdated affinity for Junior Lake cards in a recent post, and not long after Jeff sent me a nifty Lake rainbow! 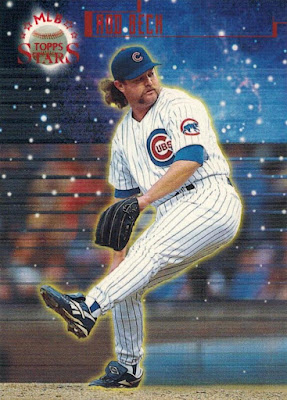 Slipping a new Shooter into my binders always makes for a banner day, and I'm just sad it took me so long to recognize these terrific cards I've received from a bunch of loyal readers as of late.
Unemployment is always a weird transitory phase of life, but I don't anticipate being in job limbo for too long, and it's been nice to be at home spending time with my baseball cards the last couple days after the mental hula-hoops of the past few months. Sometimes hitting the reset button is all you can do. As I've said before, one of the many reasons I treasure baseball cards is because of the consistency they bring to my life, and that feels true now more than ever.
So here's to bigger and better things!
Posted by Nick at 6:34 PM

Schmidt wins the round. That's a sneaky good Boggs though.

I hope it all works out for you.

Best of luck on the job front.

Some of those Classic sets do seem more elusive than others for some reason.

Glad you enjoyed the cards!

Good luck with your job search. Hopefully there are better things ahead.

At least you have a fallback if need be. What's in Milwaukee?

Good luck to you in your job search! Glad to make a modest contribution to your OD set.

congrats on making that tough decision - i hope you find something fulfilling and rewarding soon. i liked your analogy to a relief pitcher bouncing from team to team - a modern day matt young.

You can't go on with a boss like that. Nothing is worth the strain. Find something you like doing and do it with nice people. Then it's almost not work.
I always say whatever I'm meant to have or do will come along either way. Should be true for anyone.

Good luck with the job situation! Sounds like you should have some interesting changes up ahead.

Hope you replace Kruk as an announcer. He's awful.

Life is too short to have to deal with a controlling and poisonous boss. Best of luck in whatever direction you decide to go.

Bad bosses are the worst. Good on you for cutting ties and I wish you luck in landing something meaningful and profitable.
BTW, you definitely saved the best card for last in this post. I have a copy of that Shooter card and it is glorious!

Good luck with the job search...perhaps it's time for a nice cushy office job!

We're ships in the night, Nick. I just moved my family from Milwaukee to Aurora this week. Let me know if your Milwaukee move solidifies and maybe I can bang my network for some work for you.

Sounds like you made a good decision with the job, and it's nice to know you've got a couple of offers if you want them. Quality of life is definitely important.

As for the cards, those '91 Classic Updates are my favorites of the lot. I wonder if Boggs got the call in his favor there. Looks like the pitch was a little low.

The purple Classic cards are from the 1991 board game. About 9 years ago I was able to pick up a complete edition at a garage sale for $1....had all the cards plus a gameboard that looks like a baseball field. I have been gradually trading those away over the years, but still have a small stack of those remaining.