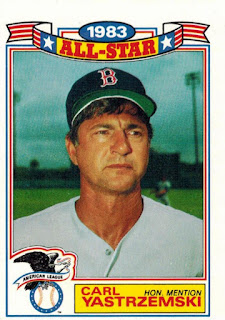 As much as I enjoy the delightful world of Short Term Stops, and joke about guys who played for nine different teams, I still have a deep admiration for those select few players who spent their entire careers with one, single franchise.
I started watching baseball around 1998 or so, and ever since then, the only version of the game I know is the one that periodically features guys jumping teams every year or two. I'm a bit ashamed at how regularly I see a highlight or something these days and go Oh yeah, I forgot he was on [insert team here]. Not surprisingly, I can count the number of notable players in my generation who've spent their entire careers with the same team on one hand. For better or worse, the game isn't structured that way anymore.
For this reason (and because I don't need any excuse to create more themed rosters) I've decided to put together the ultimate lineup of single-franchise greats - for lack of a better name, the One-Team...Team.
Starting Pitchers 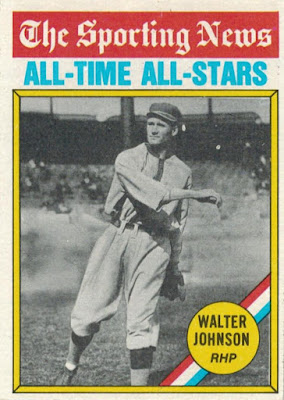 Walter Johnson (Washington Senators -- 1907-1927)
Of course, the uncomfortable underbelly of glorifying these one-team guys is that the majority of them basically didn't have a choice - the reserve clause bound them to their original franchise until that team decided to cut them loose.
We'll never know if Walter Johnson really wanted to spend his whole 21-year career with the Senators, a team that was a perennial bottom-feeder for most of those years - I'd guess not. 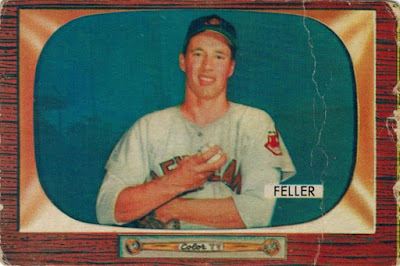 Bob Feller (Cleveland Indians -- 1936-1941, 1946-1956)
Bob Feller's career was fractured by a four-year stint in the military, but from his debut as a 17-year-old rookie in 1936 to his age-37 season in '56, every single one of his 18 big-league seasons was spent in Cleveland.
With the way the game works today, it's admittedly hard to wrap my head around a guy like Feller spending two whole decades with just one team.
Relief Pitcher 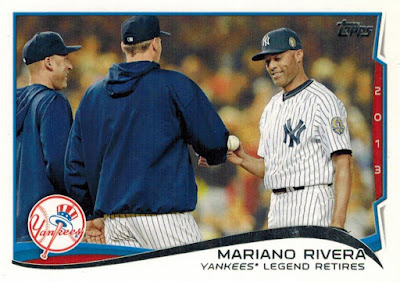 Mariano Rivera (New York Yankees -- 1995-2013)
It's rare to see a relief pitcher spend his entire career with one franchise - bullpen help is an especially volatile commodity these days, and every time I look up it seems like a closer is playing for his seventh different team.
It's a testament to Mariano Rivera's greatness, however, that the most dominant reliever the game might ever see spent all 19 years of his big-league life in the famous Yankee pinstripes - a career that spanned the height of the free-agent era, no less.
Catcher 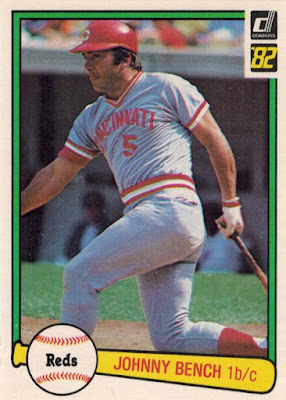 Johnny Bench (Cincinnati Reds -- 1967-1983)
A staple of the famous Big Red Machine, Johnny Bench spent his entire 17-year career with the Reds, even up until the twilight years when most catchers are (sadly) forced to weather those ghastly dual-position listings on their baseball cards.
First Base 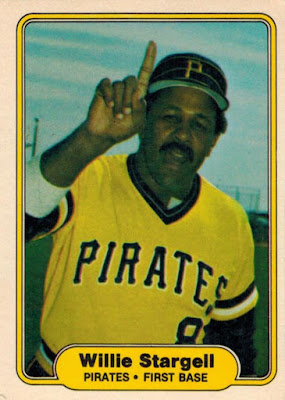 Willie Stargell (Pittsburgh Pirates -- 1962-1982)
Willie Stargell spent an astounding 21 straight seasons with the Pirates, and few, if any, players endeared himself more to his adopted home than Pops.
Like all the players on this team, it's pretty much impossible to imagine them in any other uniform - but it's especially difficult to picture Stargell in anything else than that iconic Pittsburgh gold.
Second Base 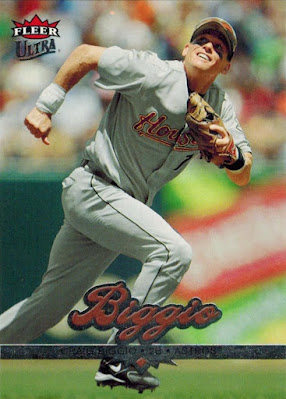 Craig Biggio (Houston Astros -- 1988-2007)
There's a variety of reasons why you just don't see many one-franchise guys these days, which makes the scant present-day great who does spend their career with a single team stand out even more.
Todd Helton and the recently-retired Dustin Pedroia are a couple who come to mind out of that rare modern breed. Craig Biggio's another - though the positions he played varied greatly, he spent his entire 20-year career with the Astros. As great as Biggio was, I always seem to forget he's part of the 3,000-hit club, and that he's in the Hall of Fame. It's hard to imagine guys you grew up watching as part of such elite royalty.
With the way the market works these days, it's almost impossible to predict any future one-team guys (Yadier Molina? Buster Posey?), but I hope Biggio, Helton, etc. aren't the absolute last of a dying breed.
Shortstop 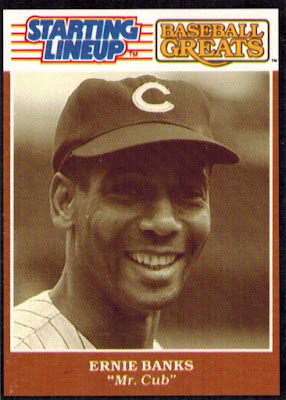 Ernie Banks (Chicago Cubs -- 1953-1971)
It would've been criminal for a guy nicknamed "Mr. Cub" to play for any other team, and I'm glad we never had to endure that.
Third Base 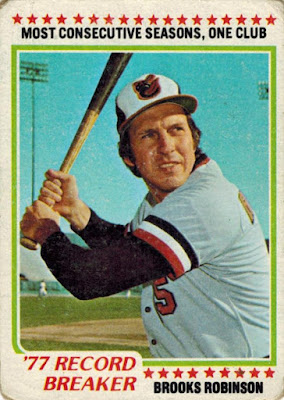 Brooks Robinson (Baltimore Orioles -- 1955-1977)
Third base is a hot corner for one-team legends - George Brett! Chipper Jones! Mike Schmidt! - but Brooks Robinson remains the easy king here.
Only one other player (who we'll see in a bit) has spent as many seasons with a single franchise, and it's hard to imagine we'll ever see anything close to Brooks Robinson's 23(!) consecutive seasons with the Orioles - a feat so great it even got its own Topps baseball card!
Outfield 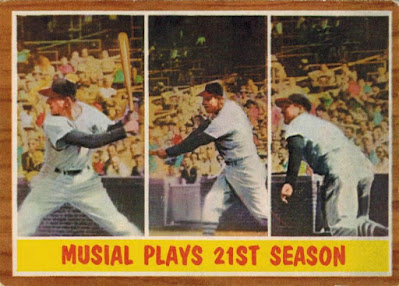 Stan Musial (St. Louis Cardinals -- 1941-1944, 1946-1963)
Like Bob Feller, Stan Musial's career was interrupted by the military, but Musial's pre- and post-service years were spent exclusively with the Cardinals.
Even though he'll forever be a legend in St. Louis, I'm not sure Stan the Man knew the meaning of Home Field Advantage - of his 3,630 career hits, exactly 1,815 came at home...and exactly 1,815 came on the road. 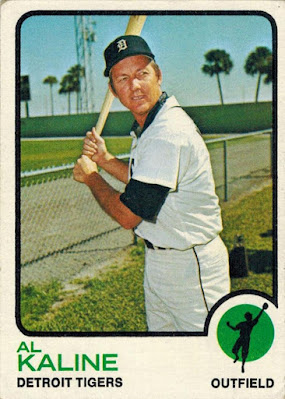 Al Kaline (Detroit Tigers -- 1953-1974)
Al Kaline and Stan Musial both spent all 22 seasons of their careers with single teams, which is tied for second (with Mel Ott) for second on that list.
As already mentioned, the top spots on that list go to Brooks Robinson and... 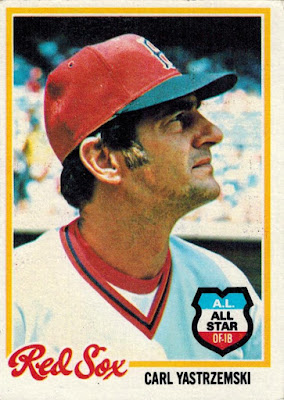 Carl Yastrzemski (Boston Red Sox -- 1961-1983)
...Yaz!
Each and every one of Carl Yastrzemski's 3,308 career games came in a Boston Red Sox uniform across his hallowed 23-year career, far and away the most of any single-franchise player (easily besting Brooks Robinson's 2,896 games with the Orioles). There's a strong argument to be made that no player cemented himself in his team's history more than Yaz did with the Red Sox. The physical numbers and emotional history are both there.
I'd also take good odds that we'll never see Yaz's kind of one-team longevity again - players' careers don't really last that long anymore, and even if they did, it's quite unlikely they'd be able (or want) to spend those years with a single franchise.
Designated Hitter 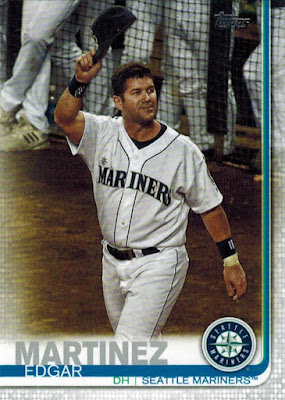 Edgar Martinez (Seattle Mariners -- 1987-2004)
Designated Hitter is a tricky position for a team like this - most DHs usually come about due to age and/or diminishing ability, which makes said DHs more likely to jump teams as their careers wane.
If it weren't for Edgar Martinez, the DH spot would be a big fat TBD on this list, because I can't find another DH who spent his entire career with one franchise. While he originally came up with the Mariners as a third baseman, Martinez evolved into a DH fairly early on in his career, and became arguably the best to ever play the position.
I'm still not the biggest fan of the DH, but if it gave us fans more of a chance to enjoy the hitting artistry of guys like Edgar Martinez, then I guess it can't be all bad.
Manager 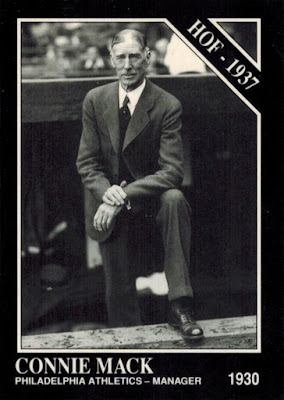 Connie Mack (Philadelphia A's -- 1901-1950)
I figured a team like this needs a good manager - and Connie Mack seems like a logical choice since he managed the A's for 50 CONSECUTIVE YEARS.
Asterisk #1: Mack was a player-manager for the Pirates from 1894-96, but I'm only counting his manager-exclusive years here. Asterisk #2: Mack also owned the A's, so it's not like he was ever gonna fire himself. But still...to think of a guy managing one team, and only that team, for a half-century is just mind-boggling. Imagine a manager getting hired in 1971 and managing all the way up until, well, now and you get the idea of how insane that feat is. He's the right man to lead such a prestigious squad.
Fast-forward 50 years, and we'll see what kind of roster we'll be fielding for the 2071 One-Team Team - just don't be surprised if Connie Mack is still out there, leading the charge from the dugout steps, suit-and-tied and smiling.
Posted by Nick at 5:30 PM

Wow. Snubbing Schmidt? I can't even talk to you right now.

Except to say that I might play Musial at first and have Gwynn over Stargell.

love this post. i miss players staying with one team their entire career, i realize sometimes it out of their control but would be nice to see more of. i'm sure you've heard of this book, Hometown Heroes: The Single Franchise Baseball Stars of the 20th Century...it's a great history of all the single franchise players for each organization. awesome photos too.

Wonderful post. I'm one of the many who love single team players. But I gotta agree with Elliptical Man, I'd probably go with Schmidt, but he did only play 18 years compared with Robinson's 23. That's gotta be worth something.

Excellent idea and I'd agree for all these!

Love this idea. These guys are a dying breed for sure.

Adam Wainwright also comes to mind, and it's nice to see him and Yadi as battery mates once again.

Way to build this around the Yaz '84 card. I had that one today too!

I do have to agree with Elliptical Man--Mike Schmidt is the GOAT at third and should be here. Actually I'd probably take George Brett over Brooks too, but Schmidt is #1. Also surprised you only picked two pitchers--Bob Gibson says hi. Goodness knows who else could be in the bullpen, though--even Hoyt Wilhelm bounced from team to team back in the days when HOF caliber players rarely moved.

Funnily enough, I'm in the process of opening my first 2021 hanger box, and I just pulled Alex Gordon's sunset card. Of course he's not quite on the level of the players here, but a very good player who spent his whole career with one team in this day and age, and a small-market club at that.

Awesome team. As much as I dislike the Yankees... I've always admired Lou Gehrig so he'd be my guy at first.

The Red Sox were blessed with their left fielders - From Ted Williams, to Yaz, onto Jim Rice and even Mike Greenwell - all played their entire careers with Boston.

Count me in for Schmidt at third! Good post...maybe you needed a few bench players to calm us Schmidt fans down. :)

Don't worry about one-team players disappearing. The Yankees always keep their players, which is one thing you can thank the Yanks for.

Awesome post, and great comments. Gwynn, Schmidt, Brett, Gibby, Yadi, even Barry Larkin are all worthy of consideration, but I can't argue with your picks. Some really great cards there too!

As good as Brooks Robindon was, you have to have Schmidt at 3B.