The fate of dime boxes 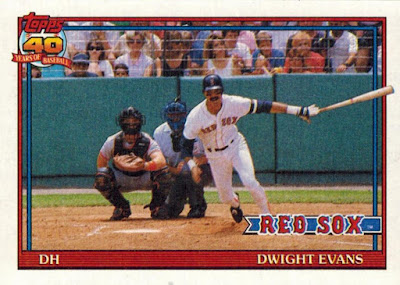 One of the reasons I'm anxious to start doing card stuff again is because I'm interested to see what shows look like in The Flipper Era.
Specifically, I'm looking forward to seeing the fate of my beloved dime boxes. Early reports from others on present-day shows have almost all confirmed what I'd feared: most vendors are eschewing the cheap cardboard in favor of the fancy high-dollar stuff. Dime boxes are becoming as rare as the hits people seem to be chasing. And from a purely monetary standpoint, I can't say I blame those vendors - with limited table space, why display that dime box of weird niche '90s stuff when you can bring another glass case of $100 cards?
From a collecting standpoint, however, this is obviously disappointing news. To me, dime boxes are the lifeblood of card shows. It's not that I'm hell-bent on finding "deals" left and right - I buy expensive stuff sometimes, too - it's just that cheap cards are where I get the most sheer pleasure out of the card show experience. The feeling of seeing those white boxes with thousands of cards inside them is unmatched anywhere else, the thought that anything could be in there. It's magical.
And I don't know about you, but when I see a table with glass cases and nothing else, I almost always walk right on by, because I know I'm not going to want and/or be able to afford anything in there. 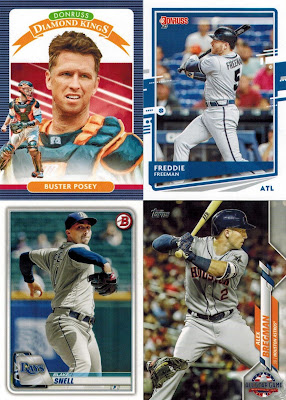 At this point, I'm targeting next month's monthly local show as the Grand Return, and needless to say I'm going in with a great deal of excitement, and a twinge of nervousness.
I'm not so much worried that people are going to start charging a dollar a pop for cards that are otherwise dime box fodder. I bet that's gonna happen, too, but the solace there is that I at least know there'll always be someone out there who's pricing stuff like a normal, sane-thinking person. I don't think for a minute that dime box-loving collectors will ever go extinct, or anything close to it. I just get worried our voices will be drowned out by the almighty dollar.
But maybe that's an irrational thought, because as I've detailed many times on the blog in the past year, baseballcardstore.ca (or The Online Dime Box) has been a saving grace for cheap cards in this strange era, and I received yet another order from them a couple weeks ago. 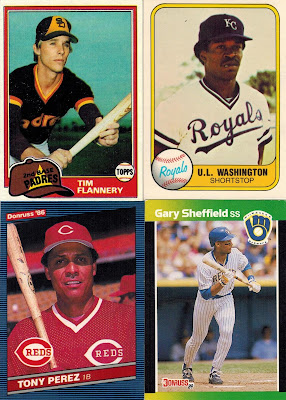 There's a certain sense of peace in knowing there's a whole site of dime boxes out there for us low-end collectors, a place that, best I can tell, is still going strong.
In addition to everything I've shown so far, I grabbed this quartet of '80s greats that flew under my radar this whole time - that U.L. Washington joins an extremely short list of cards featuring toothpicks. 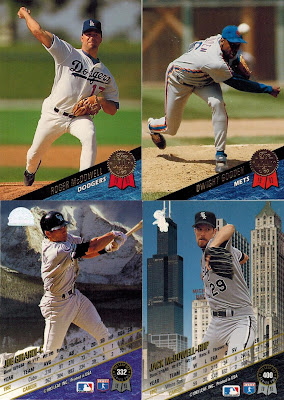 This Online Dime Box order saw me perusing the inventory a few different specific sets, rather than just pure all-out randomness.
Most people seem to agree on the greatness of '93 Leaf - especially given the inclusion of arguably the greatest card backs of the modern era. 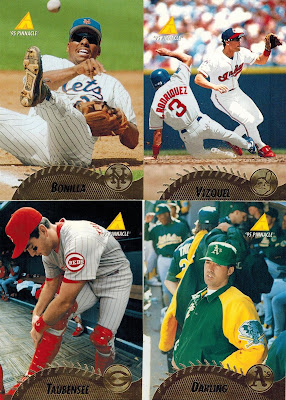 '95 Pinnacle is a set that seems to keep spawning great cards I've never seen before, even though I feel like I've gone through this checklist ten times over by now. 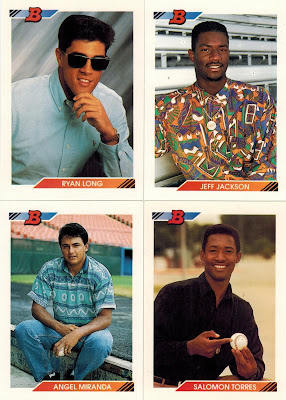 The 1992 Bowman Fashion Show - cards so bad I want to collect every darn one. 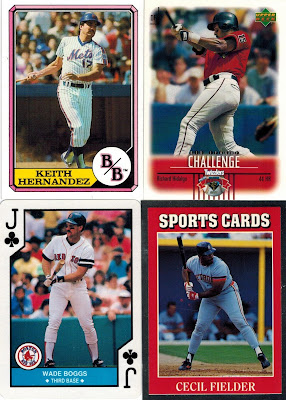 Like any good dime box, oddballs are a fun delicacy, and that stretches into virtual dime box land too.
I still feel a little weird about putting playing cards next to Topps and Donruss in my binders, but in they go - also I'd forgotten Twizzlers once made baseball cards. 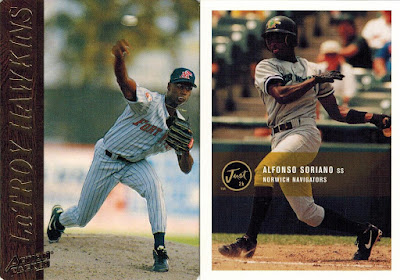 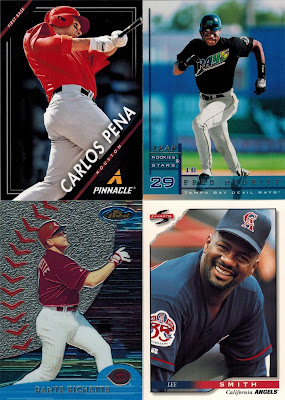 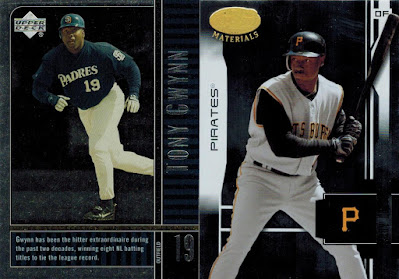 It's a bit daunting to collect guys like Tony Gwynn and Kenny Lofton, given the spans of their careers spanned the era when there were like 87 different card companies each producing 932 sets every year.
Still, on the bright side of things, that means there'll always, always be cards of them to chase, like these two new ones that popped up on the Online Dime Box (Kenny Lofton Pirates sighting!). 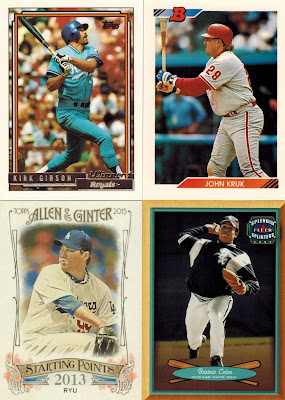 Fun new hits for a few of my up-and-coming player collections. 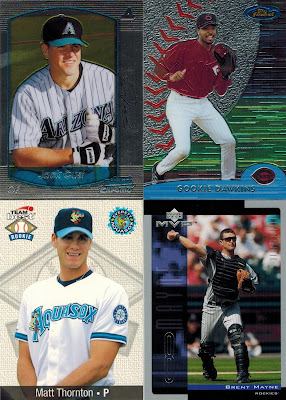 Each passing Online Dime Box order seems to add new stuff to some of my most obscure player collections, which is nice since it's not every day I get to add stuff to my page of Gookie Dawkins cards. 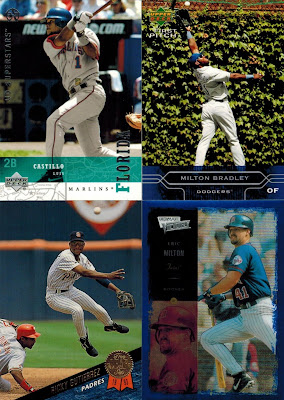 The mini-collections keep on coming. 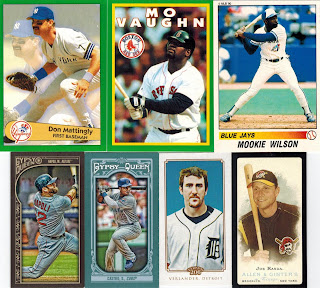 PSA: I'm still very much a fan of minis and other bite-sized baseball cards, and will always take them for a dime. 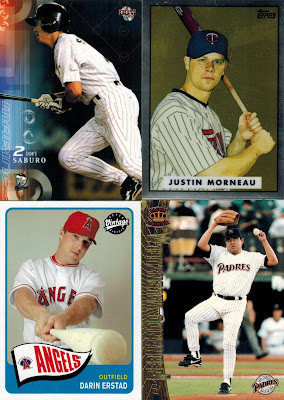 A few other random knick-knacks from the Online Dime Box - and no, I have no idea who Saburo is, but if you throw a BBM card at me for a dime, I'm gonna buy it. 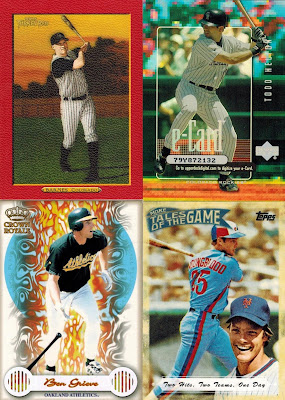 A bunch of easy dime buys here - I remember opening a ton of Turkey Red with a card-collecting friend back in 8th grade, and we'd go absolutely nuts waiting to see what red or other-colored parallel we'd get in each pack. 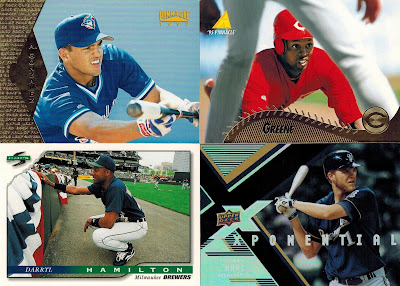 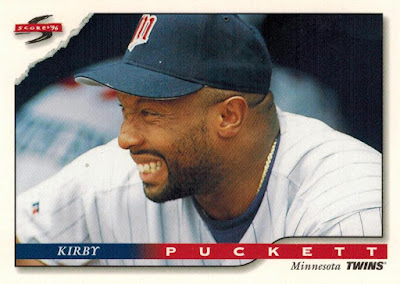 Just to be clear: I'm definitely excited to attend post-vaccine card shows again, and I'm already dreaming about that fateful day of the first one, whenever that may be.
It's just that, at the risk of sounding whiny, I liked how shows were before, and I really don't want that to change. As much as I complained about bros or unpriced cards or other general card show annoyances before, I always felt there were enough cheap cards for me and glass-case stuff for others to keep both parties happy. And I want those scales to stay balanced. I want my physical dime boxes back to go along with the joys of the virtual world. I don't think that's asking too much.
Because a world with dime boxes is a better place, plain and simple.
Posted by Nick at 5:30 PM

I'm guessing there might be less dime boxes than before at first, but it'll be very temporary.. as things approach "normal" , so will the shows.. I'm looking forward to going with you!

I hope the demise of your card show dime boxes is greatly exaggerated. They weren't much of a thing here, but I am hoping to see some at the next show I go to which will likely be in the late summer.

I feel for you. I was scrolling the web for "old wax" and the going prices for 87' topps was 70.00, late 80's donruss and the like 40.00. I agree with your dad, this BS will be temporary. I know no one who'd pay those prices for those cards. Dimeboxes MUST return and the sooner the better.

I've been to two shows recently and dime boxes have been slightly more scarce but luckily still there. Some fantastic dime store pickups there. That Ryan Long 92 Bowman is an all-timer.

I've been to a handful of shows here in CT. The dimeboxes are still there (as well as the quarter and 50 cent ones), but they are a little harder to find. We do have the flippers abound though. The table where someone bought out the stores and trying to the sell the blaster for 3-5x the regular price. I don't frequent them, but I've heard them tell people that they are scarce that's why they are so much. I wonder why they are scarce.... There are the tables with the "glass case flippers" as well as the sudden uptick in graded cards (at pandemic pricing). With that said, I have a handful of dealers I work with that I stick to. They are my vintage dealers and they have not adopted the pandemic pricing on anything.

I feel you with wanting things to go back to the pre-Covid ways. Not sure how shows are, like you I’m wanting to go back, just haven’t really been able to with work. I hope you find some good stuff at your first show.

I'm in no rush to go to a card show. I'm hoping that if I wait until the fall, the frenzy will have died down a bit. Probably not, but I have a feeling these flipper folks don't exactly have the longest attention spans.

I haven't been to a card show in almost 30 years. I'd probably jump at an opportunity if one shower up locally. I just received my first order from the Baseball Card Store too - Lots of good stuff there!

I'm hoping I'll be able to go to a show in a few weeks (got my second dose this week, so two weeks from now I'll feel safe to go). My hope is that the dime boxes will be there, because those flipped boxes will still have lots of low-value cards. That's assuming the shows are happening. Maybe they'll just be in a less prominent place? I don't know, I don't even know whether the shows in my area are happening, let alone what they look like now.

A couple weeks back, I was able to go into a card shop in my hometown area, and they had about 5-3200 count boxes of dime cards, and I found some cards in them for my various collections. Then the next day, I went to a card show for the first time in a long time, and there were two different dealers who had nickel boxes, and once again, I found cards from both for my various collections. And I hoping to go to both again in early June.

As a bargain hunter... a large percentage of the cards I have purchased at card shows over the years were from dime boxes and quarter/dollar bins. If those are a thing of the past, I probably won't buy too many cards moving forward. That doesn't mean I wouldn't attend card shows for the social aspect to hang out with friends and fellow bloggers.

I'm not too worried that bargain boxes are gone longterm, as today's overpriced prospects are tomorrow's dime cards, but I have wondered how customer behavior at such boxes would change in the Grade Everything Era. Would they clog up the table by using a jeweler's loupe on everything to try to flip a $2 card in into a $40 PSA 10 sale? The sun may be setting on that game, but we'll see.

The fear of no longer finding dime boxes is the only thing that's kept me from going to any shows for the last year or so.

Just went to a show today and there were a few dealers with dime boxes. Went to the same show a month earlier and what a difference a month makes. Last month all the tables were full and a lot of people there. This month half the tables were empty and nowhere near as many people. Price of a cello box of 92 Topps last month - $60. This month - $30. All the tables have the blasters you used to find at Walmart and Target for $19.99...except they are at least $25. I've been to 3 shows this year and haven't bought a single thing...prices are still too high.

Would love to go to a show. Am totally prepared to walk out of said show empty handed. Hopefully by the time I get to one things will have calmed down again.