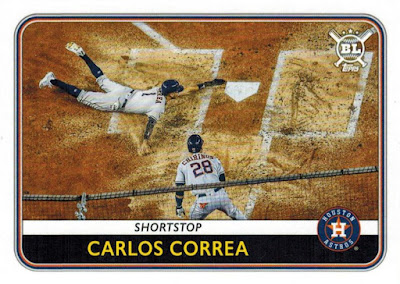 As 2020 draws to a close, it's hard not to look back at these last twelve months and ask what the hell was THAT?
It's been a strange year, for many obvious reasons, and that weirdness certainly made its way into the world of baseball cards. An example: I was in a Target the other day, and made the obligatory peek into the card aisle. As I got closer, I started to realize how different my Target runs have become this year. Back in February, I walked into the card aisle with excitement, waiting to see if the new cards were there. Here in December, though, I was already resigned to not finding anything. I was expecting to be disappointed. (And I was right: there were Cards Against Humanity packs hanging where the baseball cards should be.)
I suppose there's a "how it started/how it's going" meme in there somewhere. I don't know that I've felt as close to current product this year than I have in the past, mostly because I just plain haven't seen as much of it. It's fun picking up singles online and such, but I find that cards I get from packs stick with me a bit more than the ones I've cherry-picked. Given that, it was a bit harder for me to make a Cards of the Year list for 2020 -- not so much because there weren't any good cards issued (there were), but more just because everything's felt so much more scattered this year.
But in the end, my Cards of the Year list is a yearly blog tradition of mine, and one I still have a lot of fun with -- so here they are, my friends, the top ten cards we saw in the massive chaos that was 2020. 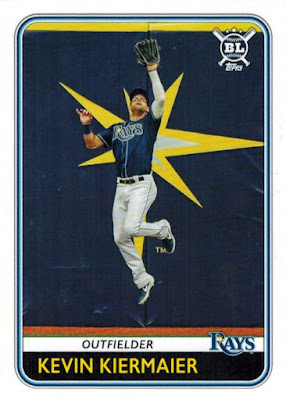 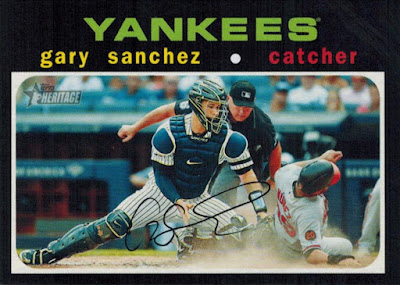 #9 -- 2020 Topps Heritage #5 Gary Sanchez
Given the way the hobby often goes these days, it's easy to wonder whether the people at Topps actually know about baseball cards, or have any concept of their history.
Cards like this one, however, give me hope -- Topps Heritage has paid a few very specific tributes to iconic pieces of vintage glory the last couple years, and the trend continued in 2020 with this obvious nod to another rather famous play-at-the-plate featuring a Yankee catcher from '71 Topps. 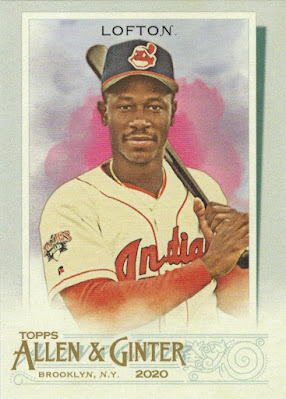 #8 -- 2020 Topps Allen & Ginter #333 Kenny Lofton SP
I often joke about being too young to see guys I grew up watching appear as "legends" in modern sets, but I think I'm more afraid of those players from my youth being ignored, and disappearing from our minds altogether.
Kenny Lofton is near the top of that list. I've been a fan of his ever since I was a kid, which of course means that I've collected his cards for a long time as well. It's almost cruel how little attention he's been given in the baseball card industry in the years since his retirement, which is why it was so great to see him pop up as a short-print in A&G this year. Lofton's last playing-day cards were issued in 2008, and this A&G SP is one of exactly two cards I own of his issued in the decade-plus since he left the game. I'll gladly trade the 784 Nolan Ryan cards made every year for just a single Kenny Lofton.
If it makes me feel old, so be it. 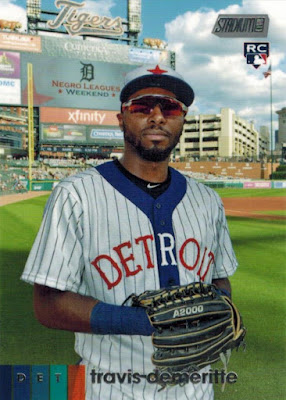 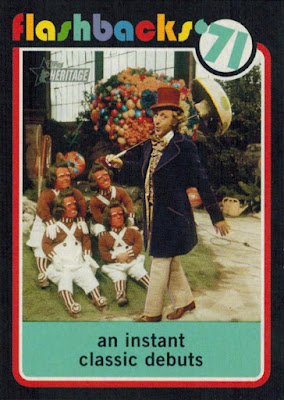 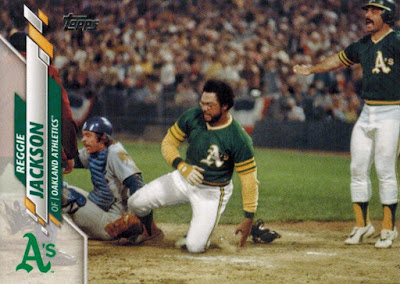 #5 -- 2020 Topps #560b Reggie Jackson (Photo Variation)
Safe to say 2020 Flagship hasn't grown on me -- if anything, I like it even less than I did when I first saw it earlier this year.
The cards themselves were almost entirely forgettable, which is why a photo variation (though a pretty darn good one) ended up being the only Flagship card to crack this list. 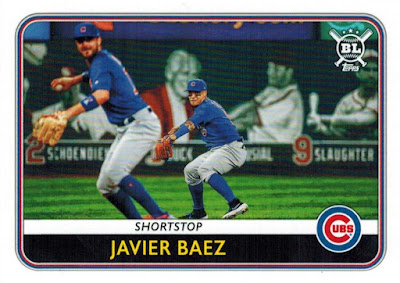 #4 -- 2020 Topps Big League #93 Javier Baez
The Cubs teams I've experienced during my adult life were way more fun to watch than the mostly bad and cellar-dwelling hometown squads of my youth.
And I can't think of a card that better sums that up than this one. 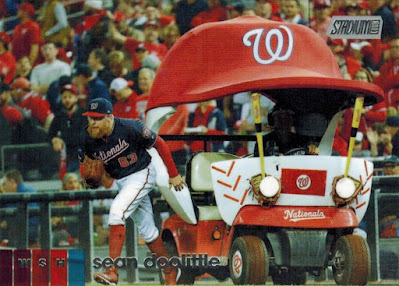 #3 -- 2020 Stadium Club #59 Sean Doolittle
For the life of me I can't understand why every pitcher doesn't use the bullpen car. 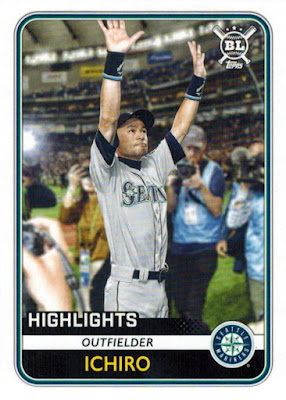 #2 -- 2020 Topps Big League #286 Ichiro Suzuki
Ichiro's tearful farewell was mostly ignored in the baseball card world, but I thank Topps Big League with every fiber of my being for giving him the ride into the sunset he deserved. 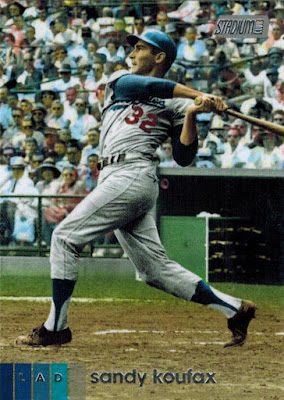 #1 -- 2020 Stadium Club #290 Sandy Koufax
With this masterpiece, Sandy Koufax becomes the first player to be crowned my Card of the Year two different times, repeating his 2017 triumph (and on his 85th birthday, no less!).
I own over a hundred different Koufax cards, and it seems like card companies used the same three pictures for all of 'em. So I thank the blessed soul at Topps who decided to change things up a bit in 2020, and take it a step further by showing a photograph of him hitting. Shots of great pitchers at the plate are almost never seen on cards, or really in the baseball world in general -- I sometimes forget guys like Koufax or Bob Gibson had to hit, too. It's a card that'll forever stand out in my binders, a card I'll always want to take out of the page and admire.
Safe to say 2020 was weird and difficult for a lot of reasons, but at least choosing my Card of the Year was easy, and pretty much painless.
Posted by Nick at 5:30 PM

Great list and agreed on the #1 Koufax! ... but dang,I thought the Kershaw I was enthused about would make it!

If I didn't already semi-collect Doolittle, that Stadium Club card with the bullpen cart would be added to my wantlist!

Gosh, I love Topps Big League. Topps could cut back to BL and Stadium Club and I'd be set as a collector.

Well, I guess I’m gonna have to track these cards down then! Nice list.

Very nice selection of cards. Thanks for ranking them and showing them off.

As you saw, my Koufax didn't rank quite as highly, to much photo-fiddling.

I haven't done an overall top 10 for several years and I definitely couldn't do it this year -- cards were in too short supply.

Big League in my opinion was the overall BEST set this year. Flagship pretty much at the bottom for me, below Panini products which were pretty off this year too. TSC just didn't do it for me this year.

Great list Nick! I think the Big League Correa and Kiermaier would be #1 and #2 if I owned them. I'm showing off my #1 tomorrow... but don't have enough 2020 cards to publish a respectable Top 10 list.

There's a lot of great cards on that list. Obviously I love the Sanchez, and I really like how for the Baez card he looks like he's 2 feet tall. A 2nd Eddie Gaedel!

Nice list Nick. The Baez is a personal favorite but the Bullpen car card is great too. All Washington relievers need to have their card on the Bullpen car going forward.

Stadium Club reigns supreme, as it should.

I don't remember seeing the Baez card before. Awesome card.

Some really cool cards and some of which I don’t recall seeing up to this point.

I never even saw Big League around these parts.

Nice to see you found some gems in a down year for new products. The Kiermaier, Baez, and Doolitte are my faves here. Topps always has great photos for their legends variations. If only they weren't such tough pulls :/

I'd somehow missed the Sanchez/Munson connection, but to me the card I was most excited to see in this post was the Willy Wonka one. Simply fantastic! I'm heading over to COMC to snag a copy right now!

Outstanding Card of the Year, and now in my SportLots shopping cart.

These are some great cards. I need to find that Doolittle coming out of the bullpen car card.