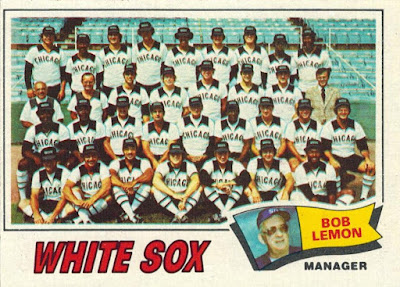 I've yet to come up with a good reason as to why I have a Twitter account.

I really only use it for baseball and baseball card related stuff, and even then it makes me wanna tear my hair out most of the time. A guy can only stomach so many bad baseball takes and pictures of people cleaning out retail card shelves. Most of the time it's a platform for seediness. This isn't news to anyone who has Twitter, of course, but for me it's in this weird gray area of a thing I have no reason using, but one I use anyway.

Up until recently, I've always been skeptical of trading cards on Twitter. Not so much because I'm worried I'll get ripped off or anything, but mostly because it feels so impersonal. I barely use my Twitter account, and for someone to wanna set up a trade with me based on my cobweb-filled profile just seems a bit odd. That, however, changed recently when Twitterer(?) @Raiderjoe reached out to me because he wanted to trade. I was, as usual, a bit passive about the whole thing until I received a message from him saying something like: I've gone through my stuff and I've got about 800 cards picked out for you so far. 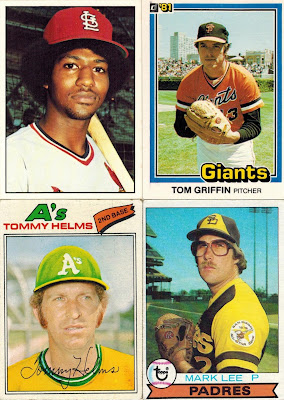 It was at that exact moment that I decided to start taking Twitter trading way more seriously.

A large flat-rate box showed up on my doorstep a few days later, packed with just about everything you could imagine. One of the first hard-hitters I found was the '77 White Sox team card at the top of the post -- a former Dime Box Dozen need and an iconic piece of baseball history since it's the only team card ever to show dudes wearing shorts. How did I not already have this card?! 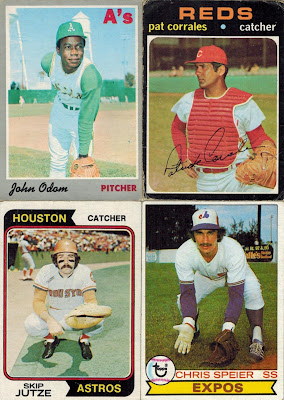 Other generally fun vintage randoms I'd never seen before -- that Blue Moon Odom has to be one of the few cards with a water tower on it. 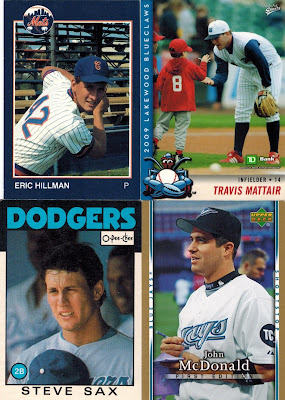 Twitter isn't exactly a haven for mini-collecting, since most of what I seem to see are guys who oddly all "collect" Trout, Acuna, etc., etc.

Given that, I was all the more grateful to find a bunch of new themed hits in here  -- including a few obscure minor league singles I could've easily gone a lifetime without discovering. 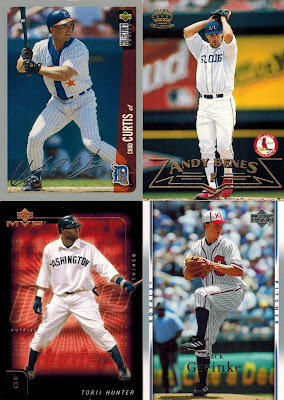 In this battle of throwbacks, it's a four-way tie for first. 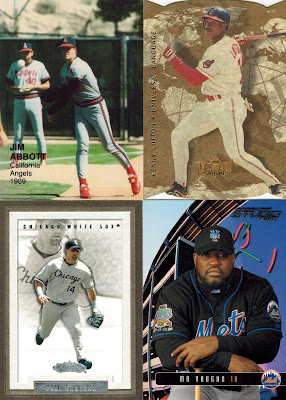 Always love getting new cards for the big player collections. 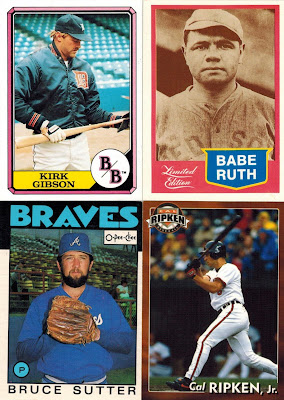 It became apparent early on that this wasn't just a random grouping of 800 cards -- this was stuff that was carefully chosen for me to enjoy, and I spent a whole glorious evening sifting and sorting through everything. 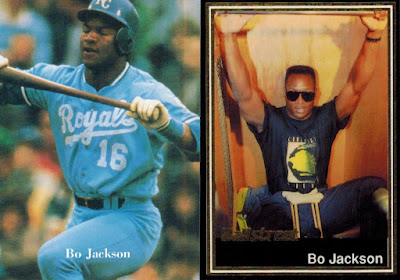 I'd bet good money that Bo Jackson was featured on more of these weird Broder oddballs of the '80s and '90s than any other single player, and these two help prove my case. 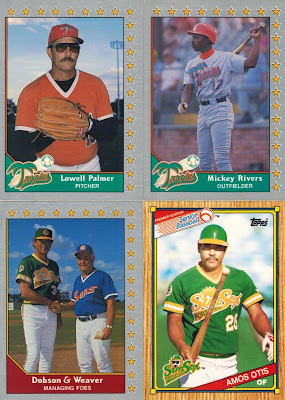 I really don't know a whole lot about the Senior League aside from the cards it spawned -- though it warms my heart to know Lowell Palmer was still wearing his famous shades in the late '80s. 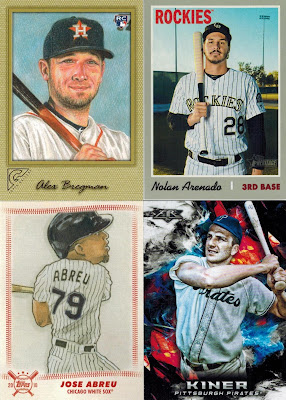 There wasn't much latest-and-greatest stuff in here, but the few I did find packed a punch. 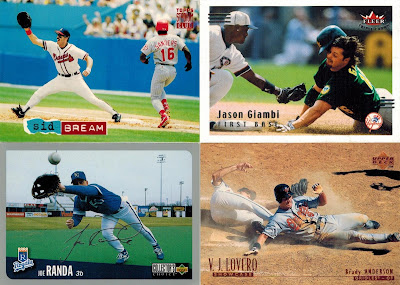 A nod to the horizontals. 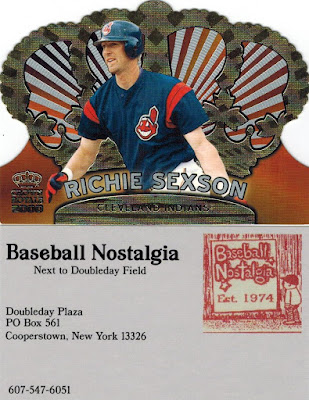 And now for something completely different: a card shaped like a crown, and a business card for a card shop in Cooperstown.

I've never been to the Hall of Fame, and I want to go for obvious reasons -- but admittedly part of my desire to make the trip one day is to check out the gobs and gobs of card shops I imagine lining the city's streets. 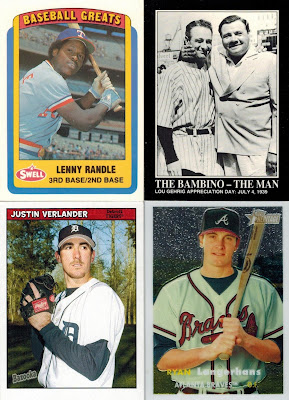 Admittedly, trading with me is like throwing paint against a wall -- it'll go all over the place, but some of it'll stick.

If you send me enough cards, you're bound to hit something I like -- I somehow didn't already have that Lenny Randle, and Ryan Langerhans is on the long list of Obscure Guys I Collect. 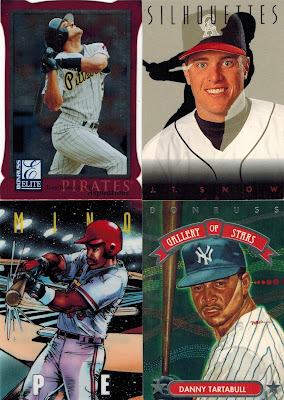 Weird stuff from the '90s -- not sure why that Silhouettes card freaks me out, but it does. 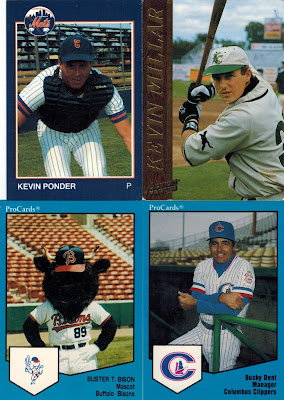 Question: where can you find an older Bucky Dent, a younger Kevin Millar, a pitcher in catcher's gear, and a giant bison head on a normal human body?

Answer: the minor leagues, of course! 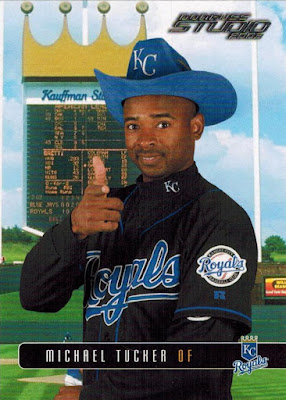 Maybe it's not the inferno I usually make it out to be. When you dig beneath the rough surface, you might just find some quality entertainment, and good dialogue between collectors. And some of them are even willing to send you gigantic boxes of baseball cards. A place like that can't be all bad, can it?

I guess not...but show me another guy filling his shopping cart with retail blasters, and I'll probably right back on the verge of deleting my account.
Posted by Nick at 5:30 PM

I've been in Baseball Nostalgia!!

Yes, @raiderjoe is a great guy with lots of great cards.

Like any device, Twitter is as good or as bad as the operator. The problem is there are so many that are complete disasters when it comes to operating it.

Glad this worked out for ya! (Bison head for the win!)

As for Twitter..never used it..but sticking to baseball cards should work out ok!

I'm a regular on Twitter, just not for anything collecting-related.

Voting for the water tower Odom.

That 1988 Columbia Mets set is a hoot... I think they were trying to avoid showing the "Mets" on the front of the jerseys. You can see more cards from this set in a post I did years ago:
https://shlabotnikreport.wordpress.com/2012/01/02/upper-deck-wishes-theyd-thought-of-this-in-2010-mets-monday-minor-league-edition/

Me no tweet, no facing anything, no snappin, poppin or whatever else is out there. Heck, I don't even like texting which just so happens to be the reason I own a smart phone. Pain in the arse using old faithful (flip phone). Man I miss that, charge it maybe twice a MONTH. Sounds like you made a new friend too. Great cards, love that Tucker, got to get me one.

Whoa that's quite a mailday and thanks for pointing out the White Sox in shorts card. (did you see my TTM return from Ralph Garr?)

I am the guy behind the Raiderjoe_FO Twitter account. If you can deal with excessive typos (done purposefully for weird style reasons that predate my time at Twitter), the occasional hip-hop comment, some animal-related tweets (mostly dog, toad, frog, and turtle stuff), sports thoughts, and other odds and ends, I do also tweet about cards and in a mostly fun way. The account is weird, though. I discuss a lot of different things and can be sarcastic and I make odd references at times. Anyway, if you can handle that, then follow me. I'll trade with other people too.

Nick did get one of my best packages thus far. I have been reading this blog for a while and have made comments here and there. Obviously, it was easy to figure what type of cards he would like.

I do not have a card blog or a scanner. If I had that stuff I would make a post about the cards Nick sent to me. I do have a blog but it is mostly about the NFL, is rarely updated, and is not about cards.

As for Twitter, it is good for receiving breaking sports news, getting starting lineup announcements directly from teams (it can really help if you play fantasy sports), and discussing cards and making trades. Yes, this is a lot of garbage on it and maybe even from my account at times. In the end, I list Twitter as a positive.

I was there on two different days this week a year ago. I'll have to look at my Hall of Fame ticket that has Harold Baines on it.

There are probably at least ten shops on that street that sell cards. There is also a great bookstore. I picked up several out of print NFL books.

I still don't really understand the purpose of Twitter. I have an account and share my blog posts on them, but have no idea if that actually brings people to my blog. As for twitter trades, I'm glad nobody has reached out to me to trade, because it's one less thing on my plate. I already have a hard time building blogger care packages. That being said... I know most collectors aren't like me and would love the opportunity to exchange cards with fellow collectors.

P.S. Gotta say that it's pretty cool that this guy sat down and hand picked 800 cards for your collection. Can't begin to imagine how much time that took.

Wow - that is some fantastic stuff!

Welp, thanks a lot Nick - I've been trying to NOT hunt down new cards but this post just added about a DOZEN cards to my "must acquire" list. My wife will NOT be happy when the envelopes start showing up and I shall blame the whole thing on you.

@Raiderjoe is a saint. What a thoughtful collection of cards to pass along to you.

Additionally, you are right - Twitter is generally a cesspool of nothing good. I deleted my Facebook AND my Twitter a few years ago and it was the best thing that I ever did.

One last thing - in regards to the Pacific League cards, check out the 1990 Jim Nettles - it's very...uhhh...Billy Ripken-ish (if you know what I mean). Rumor has it that his brother Craig was responsible.

I have the Nettles "a-----" card. It reminds me of the Keith Comstock-Paul Noce scenario. Nettles copied Ripken. Noce copied Comstock. To me, the Noce card is more hilarious than the Comstock one.

@RaiderJoe. Okay, that's one for Twitter. Still a tough call. I'll stick to blogging and the occasional venture on TCDB and SCF.

I recently got a bunch of random sports cards. I would like to trade them to a collector who likes random cards. I'd be happy to send you some.

One is for baseball content, which is usually quite enjoyable, other than the tweets that document the second bubble we're clearly in right now.

The other needs to be used sparingly. Even a quick glance at that one can send me into a doom spiral. But I did run across a really interesting thread some months ago about Sun Microsystems and how far ahead of the curve they were on the idea of the Cloud.