On the reopening of card shows 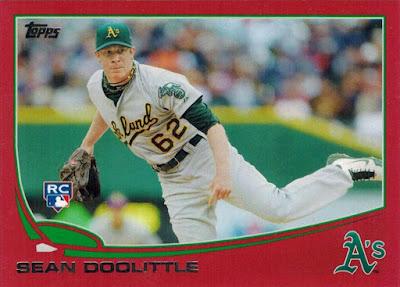 I've been hearing rumblings around the card world that shows are starting to reopen in certain places.

I was worried this would happen, and I think it's incredibly dumb. I haven't checked if any shows in my area are running again, but even if they were, I wouldn't dream of going. It's been uneasy enough being at work in a fairly well-spaced out store with (most) people properly wearing masks -- could you imagine being in a cramped hotel banquet room with almost no masks in sight? (Let's not even discuss the fact that, at least from personal experience, a fair amount of people who attend card shows...well, let's just say they're not the most hygienic people in the world.)

Even in the best-case scenario of the pandemic fizzling out quicker than expected (which in my heart of hearts I don't see happening) I highly doubt I'll attend another show this year. I've said many times that I do indeed miss card shows -- but if I have to choose between a card show and my health, I'll take my health. It feels like the great divide between people's obliviousness between want and need has really been highlighted lately. There's a huge, huge distinction between the two.

Sure, I want to go to a show, but as much as I miss the memories of those fond card show afternoons, it's not a biological need or anything. 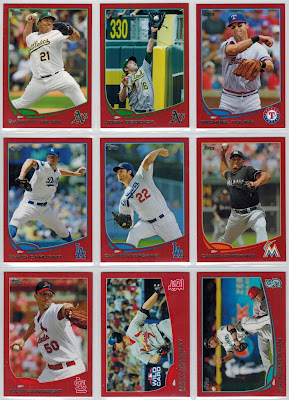 Plus, it's not like I'm in a card desert or anything -- if anything the number of packages I've received in the mail has increased over the past few months.

One particularly fun assortment of cardboard came from Shoebox Shane, a longtime trade partner and friend of the blog. I've swapped cards with Shane enough times to know that a package from him is like a card show hammered down and shoved into a single yellow mailer. 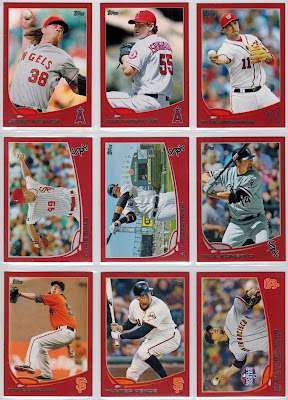 I loved these at the time, and I still love 'em now -- seeing them all in one place like this really makes me miss those (seemingly) long-gone years when Topps cards had borders. 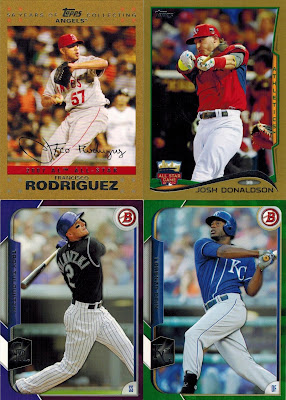 Shane has said that he never quite knows what to send me, and just picks out any random items he thinks I might find interesting.

He's shown to have a great eye for that -- and from the looks of it, the overarching theme of the lot this time around was spectacularly colorful parallels. 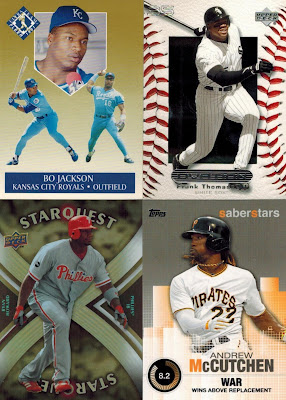 You could pick a stack of cards at random from a giant box, and chances are I'd be able to find a use for a good portion of them.

Shane nearly batted 1.000 with his selections -- including a new Bo Jackson that I didn't notice doubled as a hit for my "interview" mini-collection until the third or fourth viewing. 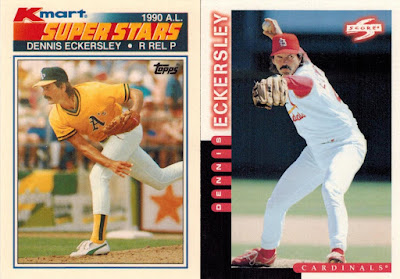 Apropos of nothing: Eck! 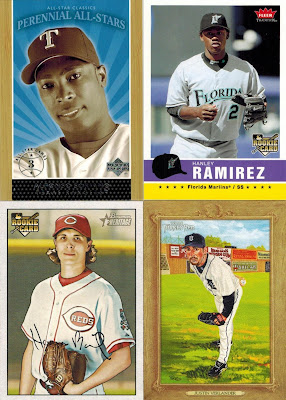 These sucked me right back into my adolescent card-collecting years -- I opened many packs of all these semi-forgotten years and brands, and I often wonder if I'm the only person who's nostalgic for a set like 2006 Fleer Tradition. 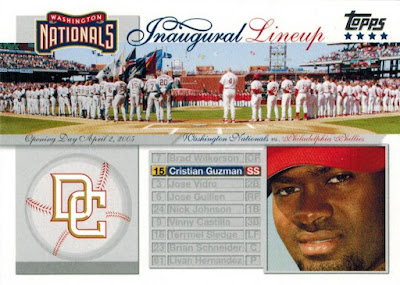 I think I actually tried to build this Inaugural Nationals insert set in 2005 -- I was too young to remember the Diamondbacks/Devil Rays expansion in '98 so the Nats were (and still are) the closest thing I'd experienced to a "new" baseball team.

I guess I must've given up that project at some point, because I didn't have this Cristian Guzman (don't look too closely at that photo, or he'll start to stare into your soul). And so as you've probably seen, everything Shane sent here had the appropriate amount of fun and randomness I'd expect to find at a show, and I barely had to leave my room -- or the seat of my pants -- for the experience.

Card shows rule, but they're not necessities -- hopefully it won't be too long before the rest of the collecting world realizes that.
Posted by Nick at 5:46 PM

The card show I went to was in Connecticut, and I'm not sure when they started up again but they're one of the few states with declining rates of cases so I felt fine going there. Not everyone was socially distancing and one dealer didn't cover their face. It was nice for a little bit of normalcy but I don't need to go again, for many reasons.

Shane sent you some great cards! I don't know what to send your way anymore either, since I went through your wantlist not that long ago.

Every single card show that would've happened at my local card show got cancelled because the convention center that hosts it has been turned into a makeshift hospital for the rest of the year (which is honestly the best use for that space), so fortunately around these parts they're not even giving people the option to go out and risk getting a virus in the name of cardboard.

I'm with you though, going to a show horrifies me, especially since it's not like they were particularly sanitary in the first place. Or maybe I'm a little jaded because I once saw some oaf lick his hands before thumbing his way through a stack of cards in a quarter-box.

Also, damn do I miss those Target reds, they were neat.

Best to just take a Mulligan this year...we'll make up for it next year!

I feel ya about hoping everything (including card shows) stay closed a little longer. There is a local show that was opened last month (albeit they said everyone had to wear a mask to enter and tables were spaced apart), and my heart wanted to go, but my head ruled and I didn’t go. It’s just too early in my opinion (which is influenced by my nurse and medically smart wife), and of this thing ends there will be more shows in the future for everyone.
I still want to get my hands on a pack of 2020 Bowman but eventually I will.
Those are some nice cards you got in your end of the trade. I like the red ‘13’s and the colored ‘15 Bowman’s. Are you trying to get as many of the Target Reds from that set as possible? If so, I think I have some that I can throw in to our next trade.

That sounds like the start to a mini collection. You know, there's pitcher batting, players at the bat rack, double dips, bunts, Tatooine cards AND soul stealing cards. The Cristian Guzman card would make a fine first card!
I love card shows. Absolutely love them. But, nothing in my head says I should be at one right now. It just doesn't make any sense to be there right now. I value my health and the people in my very close circle too much.

2013 Target reds are the best of all the Target/Walmart color border parallels from that time period.

I've already voiced my opinion on current card shows both on my blog and in comments. In short: weird. How do they even find dealers willing to do it?

There was a show here last weekend. No idea how it went as I didn't go. As of right now, the August show is still on the calendar so I guess the show last Saturday was good enough to continue. I'll keep shopping online and trading, thank you very much.

I like all that red! I went to the LCS this week, for the first time in months. MI has had a mandatory face mask order for a week now. I wear mine anyway. My experience was quite disappointing. The owner wasn't wearing a mask. Other folks came in while I was there whom he told "ah, you don't have to wear that in here." Uhm, so you don"t care about me??? I got what I went in for and left. And I won't be going back - ever. It's a bit of a drive to get there so I completed my purchase. The only other shop is even further away with higher prices. It seems the internet will get my future LCS dollars.

I've already mentioned that the next scheduled card show in my area isn't until October... and the chances were slim that I'd attend it. That was a few months ago. Things have only gotten worse. Heck... I haven't even attended the flea market... and that's outdoors. But like I commented last time, I did stop by my LCS last week (and was very impressed with their protocols)... although I won't be going there again any time soon either.

First show I know in my area was in Raleigh last month. I really wanted to go, but there is no way I'd feel comfortable doing so anytime soon. Same promoter has another one coming up the last weekend is month...I just don't get it.

Yeah, I'm in the area where we got hit first and now there are very few cases, but I still haven't gone into a store, let alone a card show. I'm hoping I can start going grocery shopping again instead of the online shopping thing, but for now since I have the luxury of not going into the store, I don't take the chance. There's been a card show in Parsippany, NJ which I attended back in March, when there were just starting to be indications that there the virus might be coming here, but it's a show that's usually pretty sparsely attended. Then again, given that my guess is that it probably won't even restart when this is done--at the moment the facility they used is still closed.

Haven't been to a card show since things reopened but I have been to my LCS (everybody wears masks)...the Walmarts in my area are starting to make masks mandatory...I wish they felt the same way about restocking the baseball card shelves. I was at one yesterday and the card area was replaced with something else. Hopefully it was just moved and not done away with.

Glad you enjoyed the cards Nick! I'll have another batch off to you soon I'm sure. And I'm with you, wouldn't even think about attending a card show right now. Maybe in 2021...

I haven't been to one in a couple years anyway. Certainly not going to start again now.

Love those 2013 Target reds! If you want to trade either of the three White Sox cards, let me know.