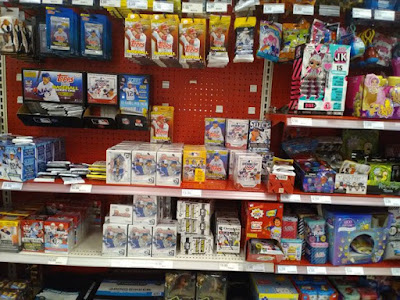 I realize what I'm about to say may sound improbable, and perhaps even impossible, but I actually found cards at a Target last week.

And it was little more than an accidental surprise: I was out with a friend one day and sheepishly asked if she wouldn't mind stopping at the Target we were about to pass. I walked in expecting the same card-aisle tumbleweeds and was pleasantly floored at the full display. It was even more surprising because I'd been to the very same Target the week prior and found the shelves absolutely barren. But alas, the baseball cards were plentiful this time, and stocked to the brim -- if you read Dad's guest post last week, you know why such a sight is so rare these days.

I knew I probably shouldn't have posted this picture on Twitter, but I did anyways, and from the reactions it got you'd think I'd just discovered cold fusion or something. I love opening packs, but I like to think my collection doesn't depend on opening packs -- from the Twitter mob on that post I unwittingly learned that, to some people, collecting means opening packs, and little more than that. My thoughts on the retail bros are well known, but on the grand scale of things it probably affects me less than most collectors. Packs, to me, are an appetizer, but not so much a main course.

Fact is, however, I did walk out of the Target that afternoon with some cards, because I just couldn't resist -- anyone wanna take a stab at guessing what my big purchase was? 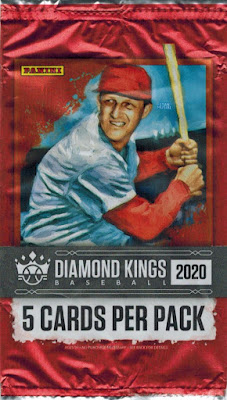 If you said a blaster of Diamond Kings (way in the bottom-left corner of that photo), you're right.

I'm as surprised as you. I'd never once bought a pack of Diamond Kings before this -- mainly because they're obscenely easy to find in dime boxes. But, of course, card shows aren't a thing right now. And while I did nab a couple Series 2 rack packs, I figured picking up any more than that would be a huge waste because I already had most of the base I needed coming in a Card Barrel order. And after deciding against Select (12 cards for $20? Nope...) and Bowman (don't know 90 percent of the dudes in the set), Diamond Kings basically won by default.

Normally, I wouldn't consider Diamond Kings anywhere near blog-worthy -- there's not a whole lot to say about it -- but given the rarity of finding baseball cards anywhere in the wild these days, I figured I'd document my blaster for posterity, if nothing else. 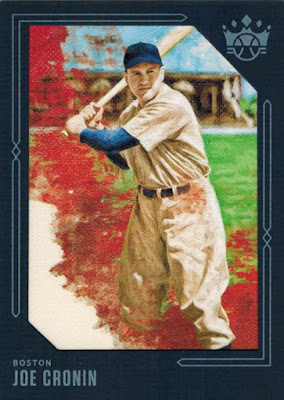 The main draw of Diamond Kings, of course, is the older guys -- they're the only reason I considered buying a blaster of the stuff to be anything near worthwhile.

A further plus in Panini's favor is that they tend to feature somewhat forgotten legends (oxymoron?) that are all but ignored by Topps these days -- Joe Cronin is one of those lost stars, which made this framed parallel a treat. 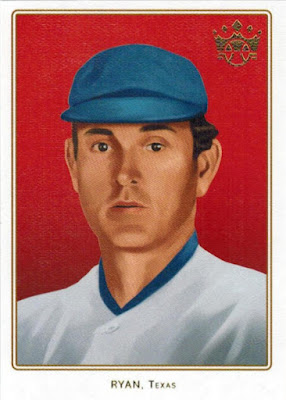 These obvious T206 rehashes are a good enough idea, but they kinda freak me out a bit...I'm not sure why. 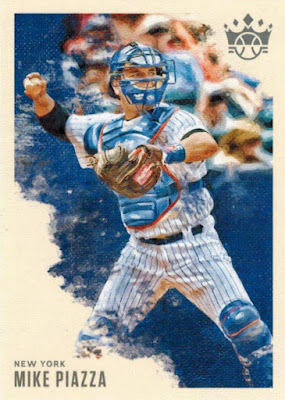 I don't talk much about Diamond Kings around here because the looks and designs and concepts just tend to get incredibly repetitive and dull and start to bleed together after a while.

I wouldn't have a prayer of matching each DK design to its respective year and release, and this time next year, I'm sure 2020 Diamond Kings will have already lapsed into that oblivion. 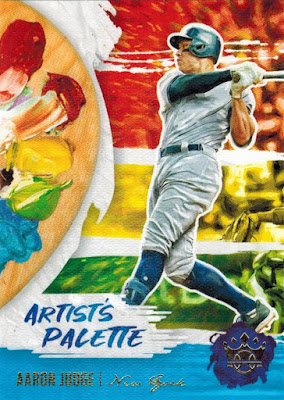 To me, the relative lack of flair from Topps these days makes colorful cards like these seem all the more exciting. 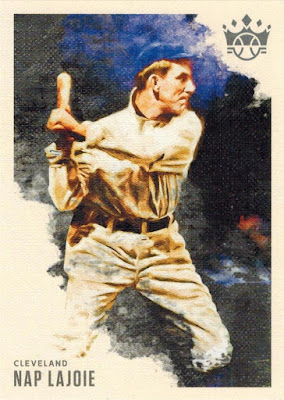 There aren't nearly enough Nap Lajoie cards in this world. 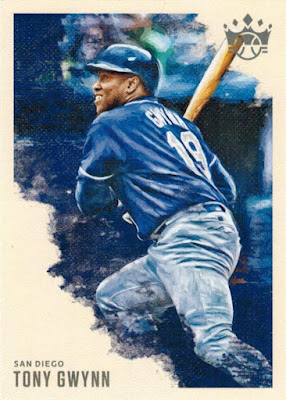 Gotta show all the Tony Gwynn cards I pull -- it's a law. 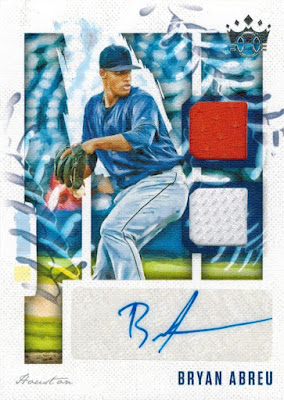 Significant for the jersey/autograph, insignificant since I have no idea who Bryan Abreu is. 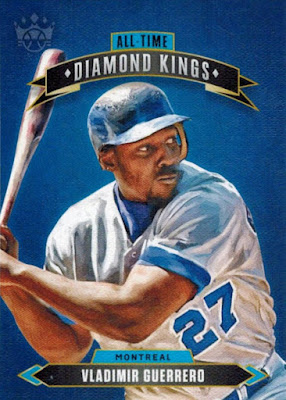 Me, I'll take this over a jersey card a hundred times out of a hundred. 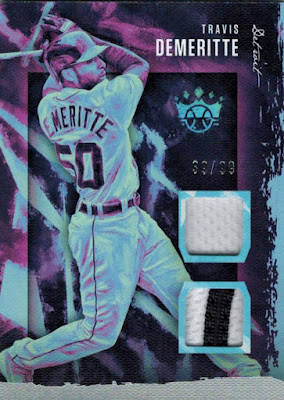 I've at least heard of Travis Demeritte, and this is probably the first time in recorded history that I've pulled two jersey cards out of the same blaster (and in consecutive packs!). 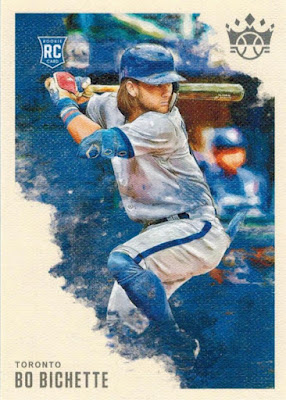 Something I don't understand: the checklist for this set lists everything from Card #101 and up as a short-print...but almost every base card in this blaster was #101+. 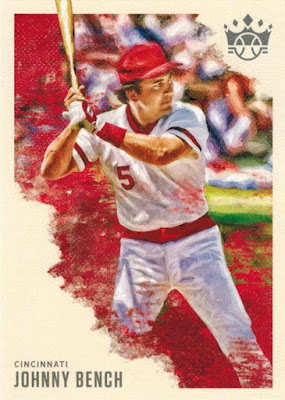 Johnny Bench has been well represented by many brands over the years, but I'll never, ever get sick of his cards. 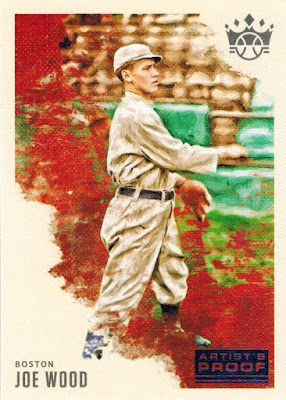 I pulled a Smoky Joe Wood out of a pack of 2020 baseball cards. 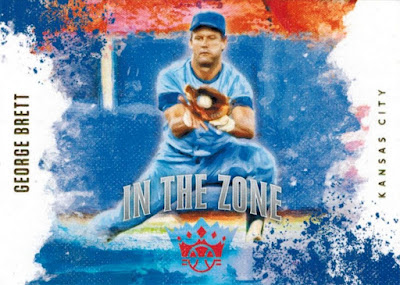 The one and only horizontal card in the whole blaster. 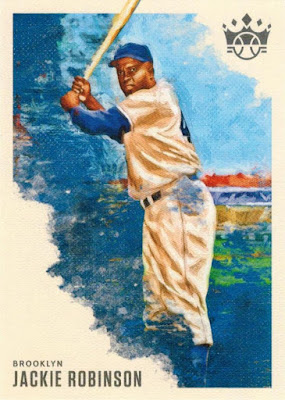 I want any and all Jackie Robinson cards. 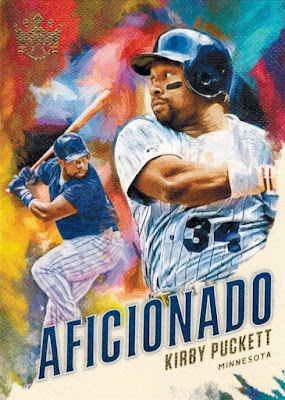 My blaster closed with this Kirby Puckett insert that kinda looked and felt like all the other inserts in this blaster -- I prefer insert sets to at least have a concept behind them, and I still have no idea why George Brett is "In the Zone," or why is Kirby Puckett is an "Aficionado."

Overall, not a ton to say about Diamond Kings other than to offer some kind of hope that, yes, some Targets, despite the madness, are still untouched by the masses and do still have baseball cards -- it's proof that miracles can happen in this crazy card world.
Posted by Nick at 5:30 PM

"Local Man Finds Cards At Target". Sounds like that should be on the front page...although without the picture I'm not sure I would have believed you.

I am not big on the logo-free cards of modern players, but can definitely get behind the inclusion of players like Cronin, Lajoie, and Wood who have almost never been featured since the Conlon Collection. If there were also Negro League stars, that would be cool, too.

I like the look of the Puckett Aficionado and especially the Guerrero DK, as the 1992/1993 DK designs were always my favorites. Nice to see some creativity in design for once.

For what it's worth,there was still new baseball product on the shelves at most of the Targets i do vendor work at ...take heart!

Diamond Kings is just an odd set... And I don't say that in a bad way, just an observational way.

I was puzzled at your choice of Diamond Kings initially, but when you explained your logic, the choice made perfect sense. Love the variety you got. Old and new players. Various designs. Good stuff!

That’s a sweet Demeritte pull!
At my local Target in Florida we were lucky enough to have Series 2 and Big League, but haven’t seen a pack of Bowman anywhere, so I appreciate the couple of Bowman cards you sent a few weeks ago. There were some packs of Select and Diamond Kings, but they aren’t my cup of tea. Glad you were able to pull some keepers out of the box and hope your Series 2 packs are good.

Looks like you were giddy if only for awhile.

It never fails. You got to Target to look for cards, you find nothing. Go to Target to for a basic household item and swing through the card aisle, you find cards. Looks it was a fun blaster.

+1 to Diamond Kings for including Cronin and Wood... Puckett, Bench, Brett and certainly Jackie are great as well.
I think if I had to create a set I would roll out a very similar checklist to Diamond Kings. I appreciate the legends and the forgotten stars just as much as the veterans and rookies.
That's my first look at DK this year. Thanks for posting the pics!

Perhaps the Ryan card freaks you out because the proportions are wrong. The eyes should be in the exact middle of the head. On this card there is an inch of face below his eyes, only half an inch of head above. Most high school art students could do better.

I think 2020 DK looks better than previous releases, though I still think the cards would look so much nicer with just regular pictures.

I stumbled upon some cards in a Wal-Mart of all places. I picked up some Prizm, Diamond Kings, and Big League. Diamond Kings features some Negro League players, for those who didn't know.

Great find and pull. Two relics in one blaster? Never seen that before. The Brett and Puckett cards are my favorites. The Ryan is freaky. It's the oddball hat. I never would have guessed it was him. Fun post.

My Target recently had no Series 2, but a lot of Diamond Kings. All things considered, still no urge to buy Panini. Thanks for showing them off!

Maybe you found some sort of SP Hot box? I can assure you those results are far from typical. A dual rail & auto relic in a blaster box tips it off as an unlikely find.