I am the gaijin 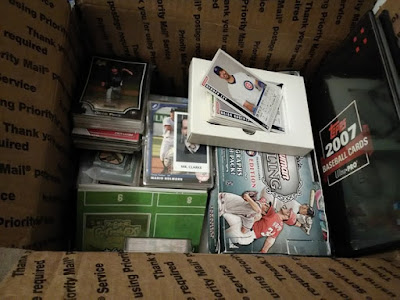 As I sit here typing from my room in suburban Illinois, the rest of the world can often seem so far away.

But one of the things I love about blogging and baseball cards is that sometimes they allow that distant world to come to you. I own a handful of cards exclusive to cities, states, and even countries way off the map from my Chicagoland home, and I think that's beautiful. Still, in all this time I've never quite experienced a package that supplied the basic feel of a place like the surprise box I received from Mr. Zappy of "Torren' Up Cards" a while ago (the only thing better than a box of baseball cards is a box of baseball cards I wasn't expecting).

I'm not exaggerating when I say that this Zippy Zapping was like a trip to Japan all taped up and stuffed into a single box... 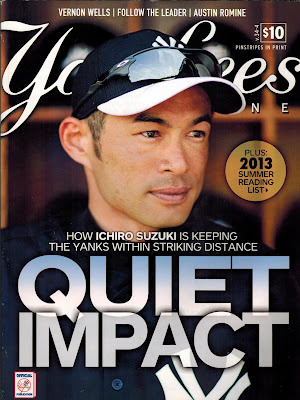 ...and I had to remove a good portion of what was in there to get an image that showed even a fraction of the fun inside.

This isn't the first time a Zapping has almost given me a heart attack -- remember when he sent me a T206 Hal Chase? -- but there's no doubting this is right near the top of trade packages I've received during my blogging career. I mean, first thing I saw once I broke the seal of the box was a huge stack of programs, magazines, and other larger items that aren't your everyday trading material.

All cool stuff, but my personal favorite of the non-card lot was far and away the Yankees-centric magazine (didn't know those existed) with Ichiro on the cover, of course. 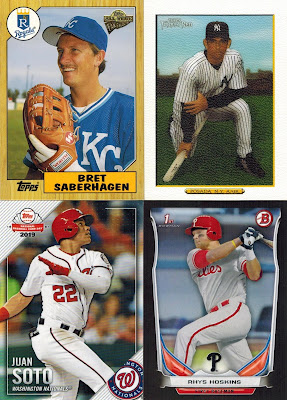 Sure, there was a fair amount of your standard MLB cards and names... 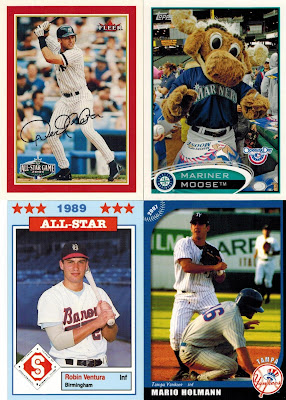 ...including oddballs and mascots and mini-collection hits! 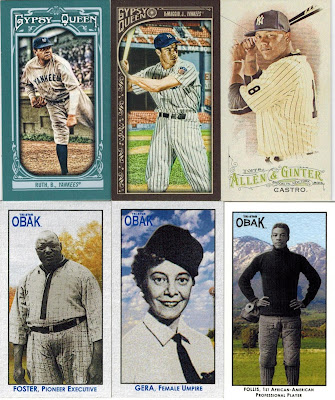 And even a hearty helping of minis! 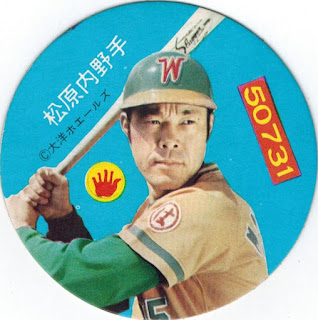 But the majority of this Zapping -- and by far the part I found most compelling -- was the absolutely unbelievable assortment of Japanese cards in there.

Regular readers of this blog probably know of my fascination with Japanese baseball, and the cardboard that goes along with it. In spirit, this package made me imagine myself as an American abroad in Japan, a gaijin. Part of the reason I get so excited over Japanese cards is that they're pretty much all new to me, and therefore interesting, thrilling.

I have no idea who's shown on this card, or even what it is exactly, but you can't sit there and tell me it ain't cool. 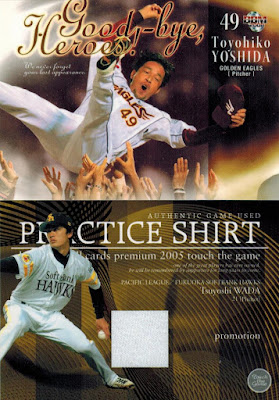 Only in Japan will you find cards of dudes getting tossed into the air, or promotional cards with pictures of jerseys on them (rather than actual swatches). 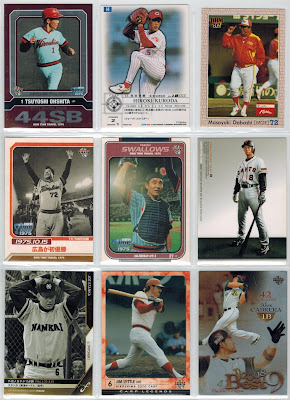 I'm somewhat familiar with the general history of Japanese baseball, but I admit I don't know a lot about the specific players and teams within it -- I don't even know much about the cards themselves aside from the fact that BBM is basically like Topps over there (I think?).

Most of the names and sets in this page are mysteries to me, but part of the beauty of getting them is that it doesn't matter one bit: they're all fantastic. 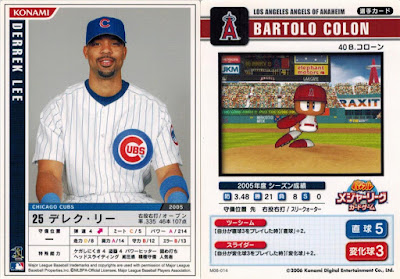 Some of my favorite Japanese cards in this Zapping were the ones that featured American players -- including this strange card-game set that features very Funko Pop-like depictions of said players on the back. 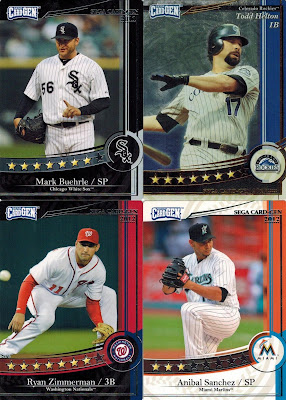 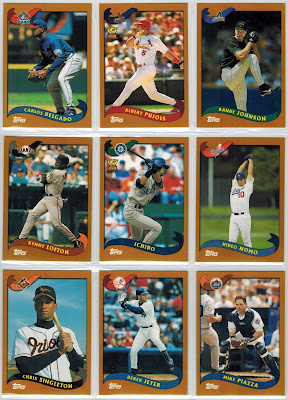 These basically parallel the 2002 Topps set, only they have Japanese on the back -- which makes the cards of Japanese stars like Ichiro and Hideo Nomo doubly neat. 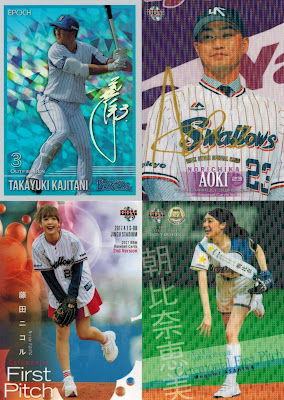 Japanese do shiny and First Pitch cards just as well as us. 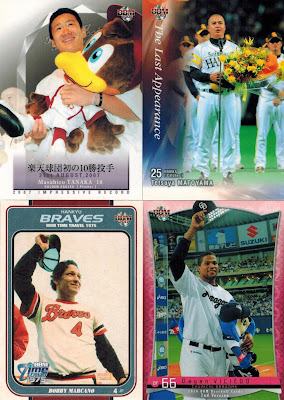 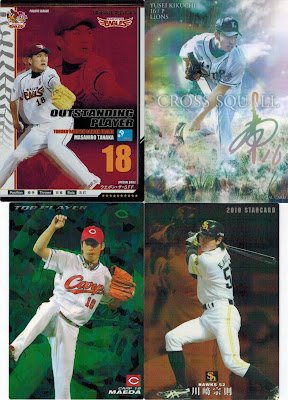 I'm an instant fan of all Japanese cards, but Japanese cards of guys who played/are playing in the US (gaijin opposites?) are supreme for me since I actually recognize names like Tanaka and Maeda. 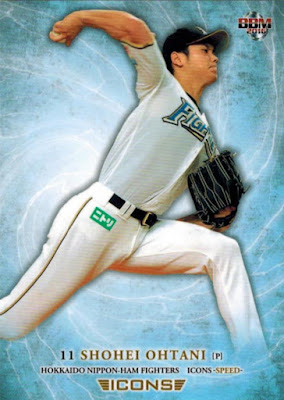 And have I mentioned this Zapping included my first Japanese card of Shohei Ohtani?!

It seriously took me an entire night just to process and soak everything in from this incredible feat of blogging kindness. To call it sensory overload would be an understatement: this box, and the cards inside it, basically took me to a different side of the world. And while I've never physically been to Japan, there's a part of me that almost knows what it feels like to be a gaijin after this Zapping.

Glad you enjoyed the package. I know you broke it up but that was actually the entire Topps Kanebo set (or at least the 2002 portion anyway).

Obaks! an amazing lot of cards, Nick. I was immediately drawn to the Swallows' catcher and the disc!!! Interesting to see card designs don't differ greatly from our own. ZZ is tops!

Very impressive Zapping you got there, congrats!

Holy cow, what an awesome zapping! Love the Japanese stuff for sure!

I don't know where to begin with this, so I'll just ask how one says "Holy crap!" in Japanese. :-)

If I make it to the National this year, I'm gonna be on the lookout for Japanese cards & menko like these.

I'm so envious. Totally awesome package. That 2002 Kanebo set is on my List of cards I want, especially the Ichiro and Nomo. Kenny zapped the heck out of you for sure!

That was quite the zapping! So much cool Japanese stuff.

I love that they called the flashback cards "time travel" cards.

That is a good haul of Japanese ones.

The round menko he sent you features Makoto Matsubara, a member of the 2,000 hit club (kind of Japan's version of the 3,000 hit club owing to the shorter season). Its from the 1976 Mitsuya set. Cool card!

BBM produces Topps-style cards, but they haven't been around nearly as long. Their first set was from 1991. Most cards from 1973-1991 were made by Calbee and packaged with potato chips. (BBM cards are sold in packs just like American cards.)

Although their cards are Topps-like, in a way BBM functioned more like Upper Deck, up-ending the traditional baseball-cards scene.

Those Ichiro and Nomo Kanebos!

The Bartolo Colon card is from a series of popular baseball games made by Konami, Jikkyo Powerful Pro Yakuya. They had a few versions here in the states called Power Pros Baseball. But they weren't as popular here.