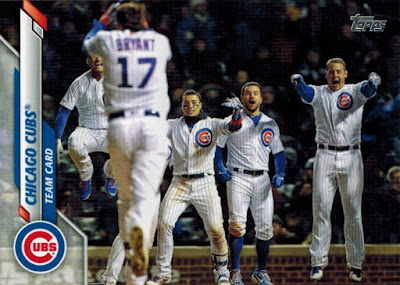 I know of at least one certainty in life: that the first cards of the new year will always be exciting.

So much of time can get lost in the mix of joys and frustrations, essentially relegating it to the mundane. I've seen some of the same cards in my collection over and over again during countless flips through my binders, seen them so often I forget the thrill I once felt when they were new. This is often true with baseball itself. During the season I get used to the day-in, day-out rhythm of the game, a rhythm I only realize when the last out of the World Series happens and I'm faced with a winter of empty calendars, willing to do unspeakable things if it would just bring baseball back sooner.

Here and there in the last month or two I've looked over old posts I wrote at the beginnings of each card season, and I've often thought to myself -- wow, was I really ever THAT excited about 2016 Topps? And the answer is YES: because it was new. Because it carried possibility. Even if I despise 2016 Topps now, it was once a thrill to see it there, hanging in droves from the Target shelves.

Sometimes it takes the dawn of a new card season to remember that. 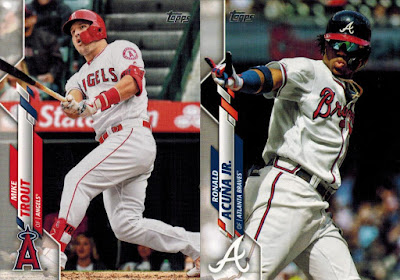 Like most new card seasons, I checked my Target (and even a Walmart) a couple times before the cards themselves finally showed up. Alas, I found them this past Friday -- coincidentally a work payday, which allowed me to go a bit more wild with my purchases than I might've at another time (think you can correlate all your release dates with my paydays, Topps?). All in all, I bought a blaster, a hanger box, a few rack packs and an obligatory loose pack.

And while I don't love this year's design by any means, you better believe I had a helluva lot of fun with my first taste of 2020 Topps. 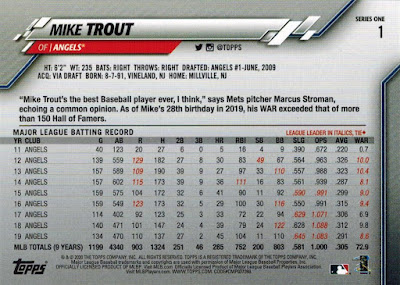 The backs continue to be...okay, I guess.

I can never muster up much to say about Flagship backs because they've all run the same in my mind over the last few years (does Topps seriously not have any other fonts for the stat lines?). 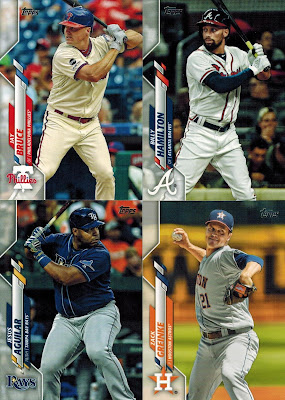 One of the more understated benefits of Series 1 is that, thanks to Update's demise, it's often the first big set to show the previous year's late-season trade chips in their new uniforms.

Greinke and Hamilton both appeared in their updated duds in Topps Holiday (and possibly other late-season sets I haven't yet seen) but those are my first cards of Bruce and Aguilar for my Phillies and Rays binders. 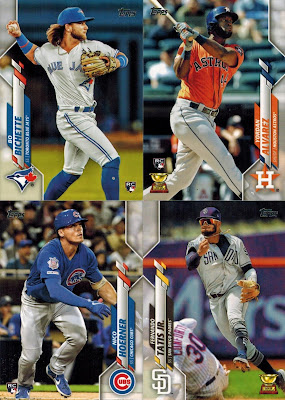 All the young dudes. 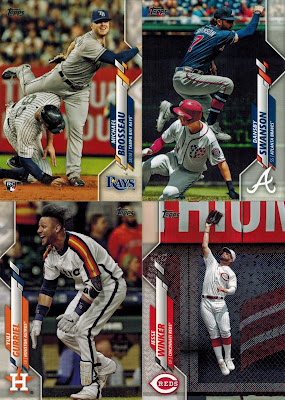 One of the more self-centered ways I have of judging a set is by how many mini-collection hits it provides. 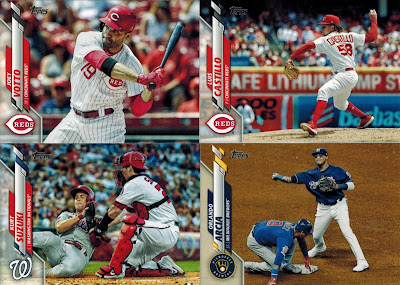 Maybe it's just the release day rose-colored glasses, but it certainly seemed like I added way more themed cards to my lists than any other Flagship set in recent memory (and judging from what I've seen around the blogs, there's quite a few others I didn't pull). 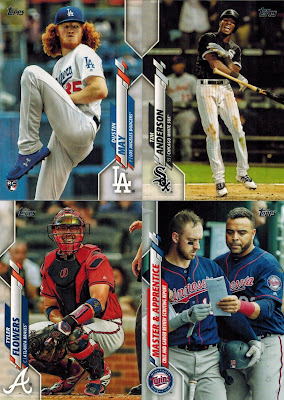 It's hard to objectively rate a set on release day, but at the end of it all I doubt I'll consider 2020 Topps a banner year in the canon: too much gray and too much of the TV-graphic trend Topps seems to have fallen into lately (in addition to the trend of too many collation issues, as I pulled doubles and triples of quite a few cards).

But even middling designs usually still produce a handful of memorable cards -- these all grabbed my attention for various reasons (can't say I've ever seen a card of dudes reading a scouting report before). 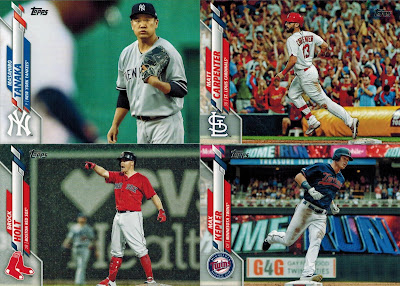 More cards I loved -- aside from being a prime member of the "weather" mini-collection I've often thought of launching, Brock Holt will forever be the first 2020 card to be inducted into the frankenset. 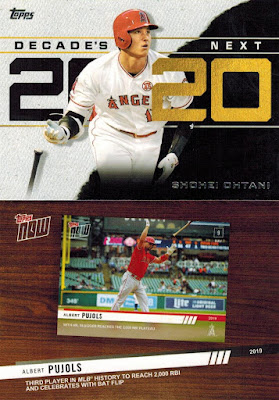 This year's Topps continues the trend of Flagship inserts just kind of being...there. 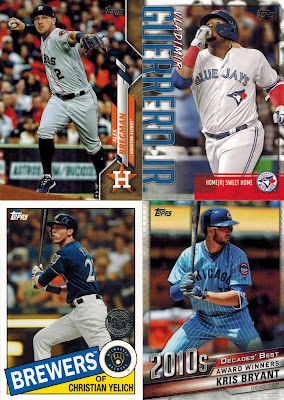 I can't muster up much excitement for parallels in a design without borders, and the others are fine but not particularly enthralling ('85 Topps is little more than a middling Topps set for me). 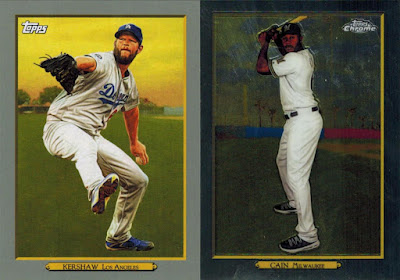 The Turkey Reds are by far the most intriguing inserts of the bunch -- I was a huge supporter of the brand back in the mid-2000s and was crestfallen when it disappeared following a few halfhearted runs as insert sets and online-only exclusives.

These don't quite have the same look and feel as the Turkey Reds I collected during my adolescent years, but they're still cool and the only 2020 Topps inserts I'll be chasing with anything resembling excitement -- though I can't for the life of me figure out why Topps decided to include Chrome parallels (pre-war designs should never, ever be chromed up!). 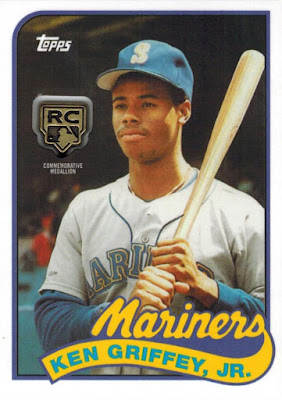 I also pulled this out of my blaster, and even though it's mega-thick I'll probably keep it, which is an improvement over most manufactured relics that leave me with the thought of what the hell am I supposed to do with THIS now?

As of this writing, I'm a fan of 2020 Topps because, well, it's still new to me. I still have plenty left to chase from it, and I haven't seen the same cards repeat themselves to death in packs and dime boxes. Maybe three or four years from now I'll be looking back on those words I just typed with confusion. They'll always be there: this comes with the territory of running a blog whose archives remain unchanged by time.

It will likely be a while before I hit the 2020 Topps train, so seeing posts like this are always good. I may even buy a few packs in the coming weeks, after I get a few more sets completed.

I agree with the Topps Now redundancy as well. Why?????

Yep, The Topps Now insert is down right stupid. I too am okay with 85', but those too are unnecessary because of Heritage and Archives. I won't be busting any packs this year either. I picked up my set (2 actually) delivered for less than $25.00 each. Anything else I need will be coming from bulk buys and dime boxes at shows this year for the most part (inserts/parallels). My sets should be here Friday, so I will have my fun too as I flip through them.

a friend opened some packs and a blaster. I nabbed a few cards for myself. Many great catchers and plate plays I want to add but overall, the set is boring. Too Bowman for my tastes. I'm not buying this one. You may these for picking though as my friend gave me her leftovers! Turkey Alert...coming in a couple days.

Got my team set today. Really hate how the horizontal cards look paged up. Design is otherwise growing on me but yeah it needs more color and not in a parallels way.

The last sentence on my very first post after opening 2016 Topps:

I may have been excited about them on my way to the store, but that excitement lasted shorter than just about any other year.

The Holt, Carpenter, and Tanaka cards are all pretty awesome. I've been really enjoying some of the photography in this set. So far it's been the highlight of this product for me.

That Holt is indeed awesome and a worthy inclusion into your frankenset!