This could be the last time (at the flea market) 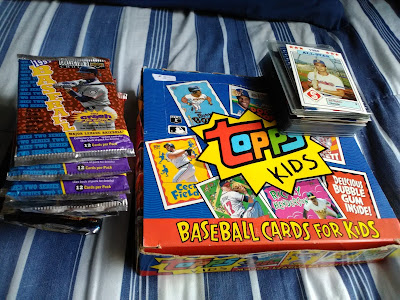 I've been working the morning shift on weekends at my new job lately, which isn't exactly ideal for a few reasons.

One, I'm about as far from a morning person as you'll ever find. Two, weekends are my prime card sorting time. Three, weekend mornings are when all the good card events happen, like, say...the flea market! Given that I'm now trapped at work on Sunday mornings, the trip I took to the local flea market a few weeks ago could be the last time. I don't know.

Still, if this does turn out to be the final trip of the year, I can't much complain about the haul I took home. 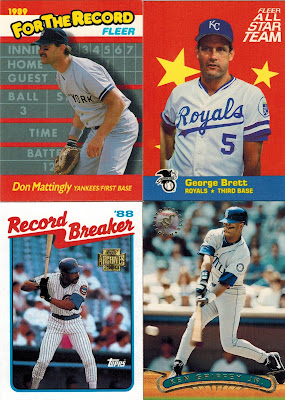 My usual card guy was there, but it looked like his 3/$1 boxes had been mostly picked through by the time I arrived.

Nothing mind-blowing here, but I couldn't pass on a handful of oddballs and stars for 33 cents a piece. 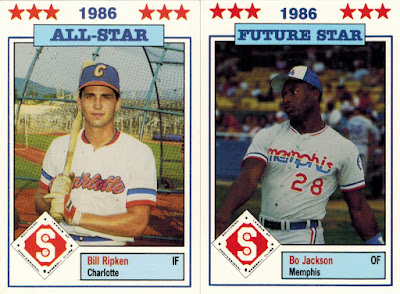 The minor league Ripken was another neat 3/$1 suspect (note the lack of swear words on his bat knob), while the Bo from the same set was an excellent dollar-box find. 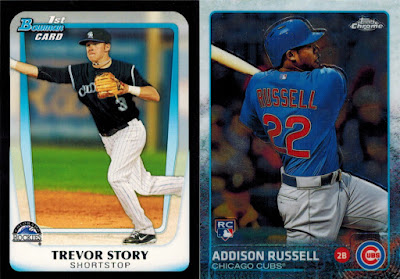 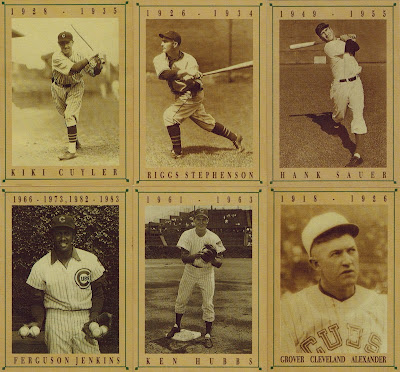 I believe these are from a Wrigley Field giveaway issued sometime in the '90s, and though they're definitely cool, finding them in my card guy's dollar box was a bit bittersweet since I passed on purchasing the entire set for $10 at the flea market earlier this year.

But all that matters is that I have them now -- and while Fergie is a mainstay in my collection, cards of the oft-forgotten Ken Hubbses and Riggs Stephensons of Cubs history are more exciting to me. 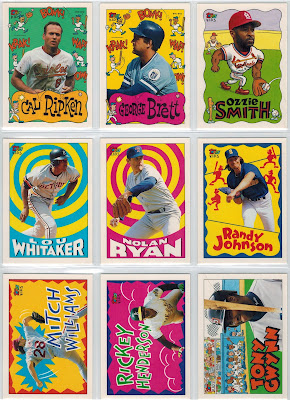 You may have noticed the unopened box of 1992 Topps Kids(!!!) in the picture at the top of this post, a purchase that cost me all of $5 from a mess of random wax that occupied a large part of my card guy's table during this particular trip.

This, to me, has always been one of Topps's more overlooked sets. It's a set truly made and designed for kids (issued the year I was born!), but it must not have been a huge hit since you rarely see the cards themselves in the wild these days. So you can imagine how excited I was to bust an entire box of the stuff for less than the cost of a rack pack.

Really the only downside is that the checklist is rather small: only 132 cards in all, which meant that my box (which, though I didn't count, had to have had at least 36 seven-card packs inside) was dupe-o-rama toward the end -- and if you happen to need anything from this set, I probably have it. 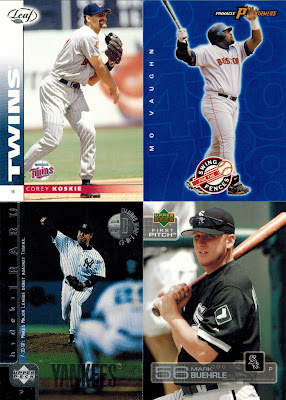 You might've also noticed the stack of unopened packs in the intro photo as well: that's because the dude with the huge pack stash I found last year was back again!

I had exactly $5 left in my wallet at the time, which netted me 15 of his 3/$1 packs -- a haul which included a lot of sets you don't see much nowadays like UD First Pitch and Pinnacle Performers (dig the Mo insert!). 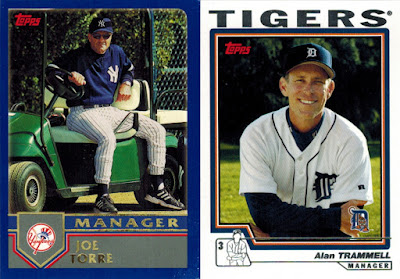 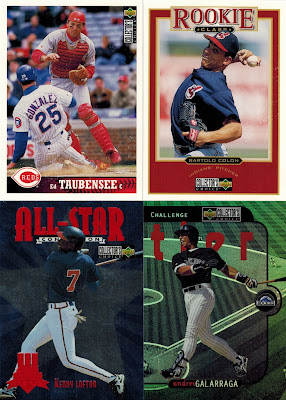 The vast majority of the guy's remaining baseball packs were 1997 Collector's Choice (he seriously had at least a couple boxes' worth for sale).

Sometimes I get to thinking that I already have most of what I need from these sets, but then packs like these come along and show me just how much I have yet to discover from the wonderful world of Collector's Choice. 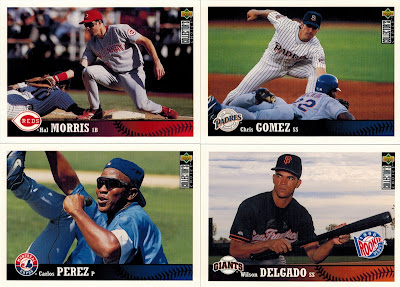 If I could wish one non-Topps brand back into existence, it'd probably be Collector's Choice -- each year's design is basic and distinct, and the photos are among the best you'll ever see from a low-end set. 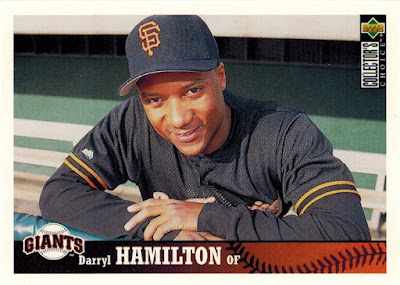 I doubt I opened any of this set as a kid: I was only five when it came out.

But between Collector's Choice and Topps Kids, I'm glad the local flea market helped me recoup some of the joy I missed out on as a young lad here more than twenty years later. It's tough to get that kind of experience anywhere else.

I just hope I don't have to wait until the 2019 flea market season to feel that joy again.
Posted by Nick at 5:44 PM

I just got a few 5,000 ct boxes from a guy, and he had a bunch of Collectors Choice in it, so I’ll see if there is some stuff I think you would like once I get finished organizing all of it.

Nice haul Nick! Those Collector's Choice Reds cards are nice! By the way, I still haven't made it out to my local flea market once this year. I need to get on that.

Mentioned this on Twitter but I'll go more in-depth here. 1992 was one of my peak collecting years. I bought a couple packs of everything including such dire stuff as Triple Play (1993 Triple Play: Awesome. 1992? Aside from the Sandy Alomar card, completely forgettable). I would've totally bought a couple packs of Topps Kids. I never saw it. Not in a shop. Not in anyone else's collections. I've only learned about it on Twitter and card blog land in the past couple years. Which is both wonderful and a damn shame since it's one of the least-forgettable sets from that period. And yeah I'd be totally interested in any Giants (and/or a Scott Erickson) since I have yet to see these in the flesh.

Also you're 100% correct about Collectors Choice. Photo-centric with nice editing and variety. A clean design which does more with less and shows you don't need all kinds of bells and whistles to make a nice modern-looking card. The only critique I can make is that I can't tell each year apart. But if the design ethos is strong enough (as it is with Stadium Club and Alan & Ginter today) this isn't a concern. Collectors choice is strong enough in my book.

Hope you can sneak another visit in this season!

A lot of my pack-busting activities from 1994 to 1998 were Collector's Choice. It took the place of Topps flagship as the default set for me during that period.

I never got into Topps Kids. It always thought it kind of patronizing.

Working weekend mornings is rough--even when there aren't more exciting things like flea markets to go to. Hopefully, you can find a way to make it back this year. You seem to always walk away with fun stuff.

Great haul! Out of all of the card products marketed to kids since the early 90's... Topps Kids is my favorite. I busted a box myself a while back.