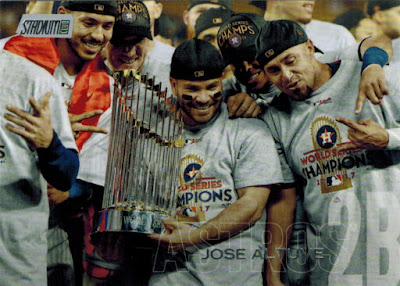 Rejoice, my friends, because Stadium Club is once again upon us. 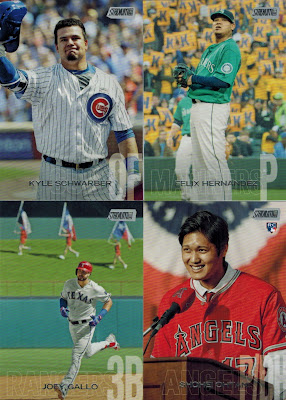 This is, as far as I'm concerned, the perennial Set of the Year (tops on my list all four seasons since its 2014 revival), and anyone who's ever bought a pack of the stuff probably knows why. 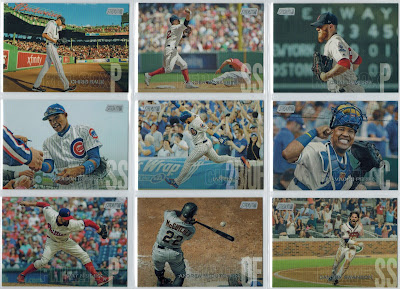 Of all the sets around these days, Stadium Club really feels like the one that's made most for collectors who appreciate the minutiae of the hobby rather than profit-seeking box breakers.

I think that's because, unlike the unceremonious churning out of a lot of the similar, dull brands out there right now, you really get the sense that the people in charge of making this set at Topps have fun a whole lot of fun with it -- just look at the images they choose. 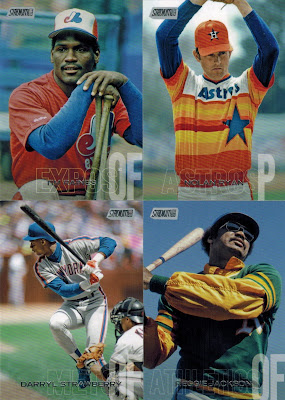 And on a personal note, it came out at a perfect time for me since I was able to grab about 90 percent of the remaining SC base I needed at the card show last weekend.

(Though I did purchase some retail in the days prior, perhaps against my better judgment since, of course, the very first table I stopped at on Sunday had a huge stack of Stadium Clubs for a dime.) 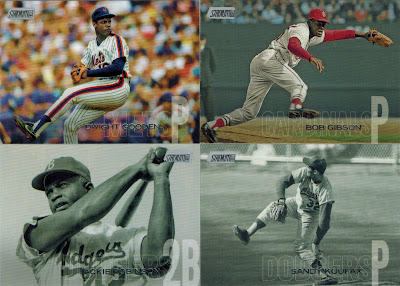 I can't say much that hasn't already been said in Stadium Club's illustrious history other than the fact that, between the packs I opened and the singles I found at the show, it's easily apparent that 2018 SC is another surefire winner.

Once again, it's the king to beat for Set of the Year honors, current stars and legends alike. 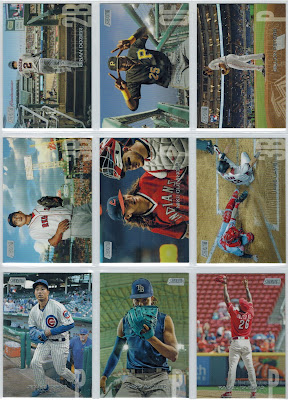 My frankensets almost get washed over when Stadium Club comes out, because so many of the great shots of players I haven't (yet) inducted into my standard team binders are no-brainer choices for many of the card numbers.

But, as I amazingly seem to say every time, none of the greatness you've seen thus far were even among my ten favorites from this year's checklist -- so here, as per my annual tradition (never an easy task), are my Top Ten favorites from 2018 Stadium Club. 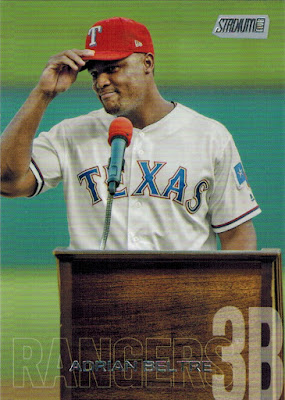 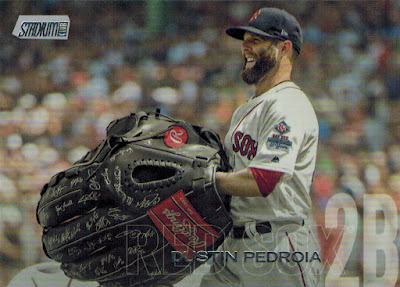 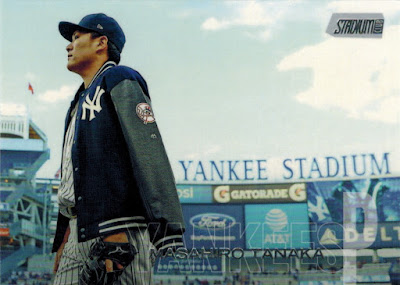 A perfectly framed shot of Yankee Stadium club, yes, but what really makes it for me is that timeless wool (or at least I think it's wool) warmup jacket -- I honestly didn't even think guys still wore those. 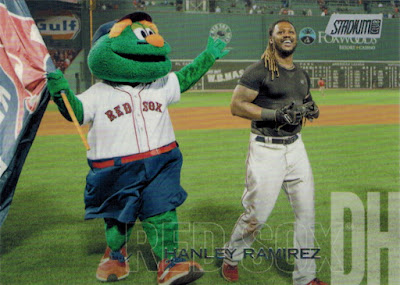 Hanley Ramirez doesn't even play for the Red Sox anymore, but that doesn't stop this from being a funny favorite from this year's set. 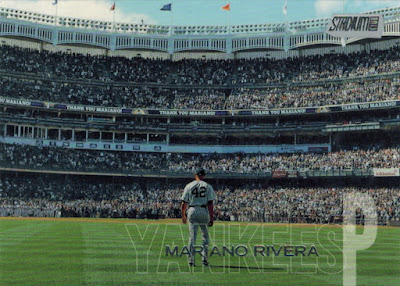 I can just hear dramatic classical music running through my head whenever I look at this card. 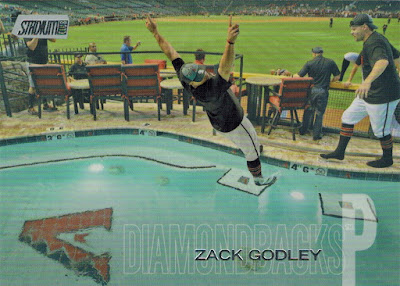 Can't say I own any other cards of a dude jumping into a pool. 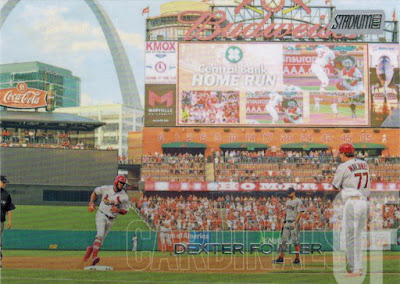 In addition to the elegant panorama of the St. Louis skyline (a beautiful city I've seen firsthand), I love this card for all the little meta-images that comprise the whole.

The scoreboard alone provides us with a wide-angle shot of the home run Dexter Fowler has apparently just hit, a zoomed-in look of that same shot, and a reverse angle of the very same photo we see on this card (!!!!!!). 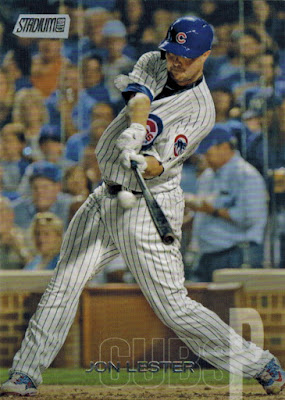 If I had to pick, Pitchers at the Plate are my favorite of my mini-collections to chase, and they're almost extinct in the card industry these days (let's hope the universal DH never gets adopted).

But then Stadium Club comes along and produces a card of Jon Lester taking a cut, and I have a sneaking suspicion that the shot in question captures the moment of his first career home run last year.

Coincidentally, I bought this one at the show this past Sunday...the very same day Lester hit his second career home run. 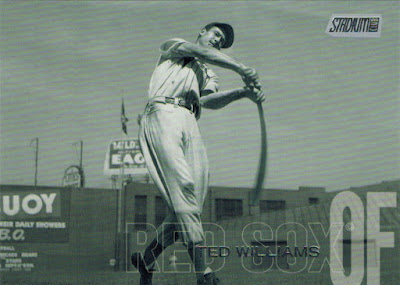 Need I say anything? 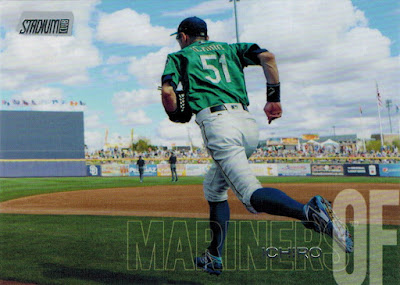 My #1 was a tough call this year -- almost an even split between Teddy Ballgame and Ichiro here.

In the end, I decided to give the honor to Ichiro since he's one of the kings of my collection, and this could very well be his sunset card. If it is, I can't think of a better way for the guy to go out than with this masterful tribute.

Once again, I salute you, Stadium Club.
Posted by Nick at 6:13 PM

I hadn't planned in getting any SC but I think you just convinced me. I might go the retail route though at card shop prices will probably be astronomical because Ohtani is involved.

Now I can’t wait for the monthly card show this Saturday. Gonna bring a sack of dimes for the Stadium Club boxes.

I'm thinking that same as Adam. I'm not into modern, or baseball, but the photography is striking. I might head out to try and find a blaster in a little bit.

There is still no sign of this where I live.

That said, SC is starting to suffer a little bit from "they did this last year" syndrome.

Topps has really outdone themselves with this year's SC. I'm thrilled I got into a box break so at least I'll have the Pedroia and Williams. Much as I hate the Yankees that Rivera card is unreal.

I've really got to try and get my hands on a blaster at least. Too many great cards here.

I like how they're still including past stars of the game. Hall of Fame types like Nolan Ryan and Tim Raines are great, but I also appreciate guys like Gooden, Strawberry and Will Clark making the set. I think players from the Hall of Very Good are under represented in today's sets.

Are the player names easier to read in person? It’s like they copied ‘06 Upper Deck with the small silver foil lettering above a larger gray/transparent lettering.

Like you this is THE baseball set I look forward to each year. It just gets it with great photos and perspective. I can't wait to get my hands on some. Great post and cards.

I'm still waiting to see Stadium Club in my local stores. I've been itching to grab a pack.

Thanks for posting, Nick. Some of these cards are absolutely breathtaking. I agree with the poster above that these resemble 2006 Upper Deck (not necessarily a bad thing.) The last few SC sets also remind me of Fleer Ultra in the glory days.

I also like how Topps is now breaking up their sets into three distinct tiers, flagship (low end), heritage (mid range) and Stadium Club (premium). Keep up the great work.

I'm in the same boat as NO, haven't seen any hint of this in my neck of the woods. Thanks for sharing, now I'm really looking forward to picking up some of this! Great read, as always!

Cool photos. Still not sold on the design (distracting oversized position in the corner). And it's a bummer there are a bunch of gimmicky photo variations in the set this year. Seem like a slap in the face to set builders.

This was the only 2018 set I was excited about at the first of the year, and I'm not disappointed. The foil worried me too, but a lot of it is scanner effect. They look even better in hand.

You saved me from having to do another post of the base cards after mine on the hits I got.

When you all find some, let's trade base singles and parallels!