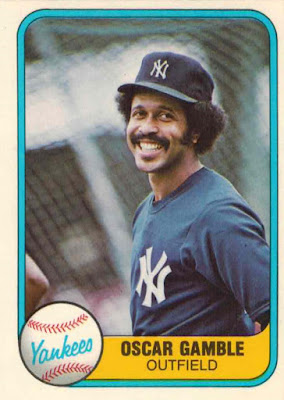 As you've probably already heard by now, Oscar Gamble passed away earlier this week at the age of 68.

The flurry of Gamble-themed posts we've seen around the blogosphere in the wake of his death should tell you how much he meant to baseball fans and collectors alike. I somehow didn't jump on the Gamble train until well after I should have, but I can say that he now stands as one of my favorite players of the '70s -- and it certainly doesn't hurt that he received some of the best cards of the decade as well.

While this particular post is several days overdue, here's a look at my Top Five cards of the late Oscar Gamble. 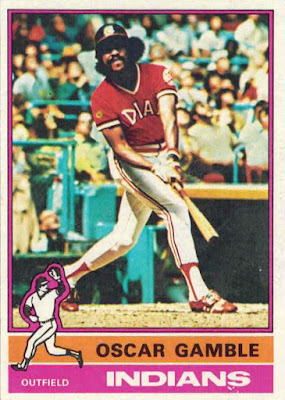 The fact that this one barely snuck into my Top Five should tell you how terrific Oscar Gamble's cards were.

Gamble is, of course, best known for sporting the best Afro of the '70s, but it sometimes overshadows the fact that the guy was a darn good ballplayer. He hit exactly 200 homers and retired with more walks than strikeouts (610-to-546) over a terrific 17-year career, and I'm shocked to now learn that he never made an All-Star team.

Gamble's classic '76 Topps card captures him at the height of both his hirsute and ballplaying powers. 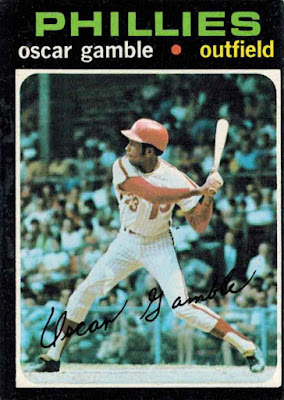 Though he debuted in the majors with the Cubs in 1969 and would play sporadically for the Phillies in the early '70s, Gamble never really became a regular until his trade to Cleveland in 1973.

Still, you'd never know it here: this is Gamble's first solo Topps card, and it remains a personal favorite of mine, better than most of the established veterans in the '71 set. 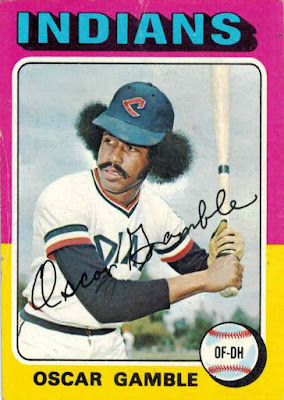 The mighty 'fro as seen on the most memorable design of the '70s. 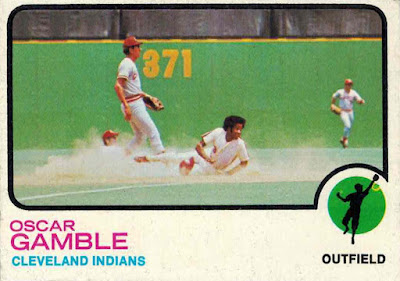 Let's start with the extremely zoomed-out action shot, which is displaced and jarring given that the real action of the card is happening outside the lens. Also the haphazard airbrushing of Gamble's Phillies jersey. Also the budding Afro. Also the 371 on the outfield wall. Also a Dave Concepcion cameo. Also a random outfielder randomly captured in the frame. Also a third hapless Red being eaten by a cloud of dust.

Also, also, also: this is perhaps the most striking example of why '73 Topps rules. 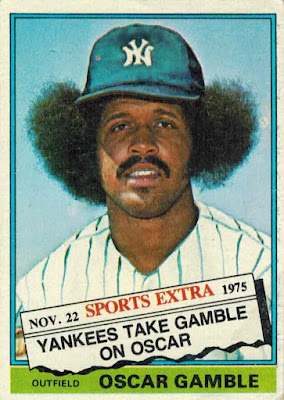 Of course it is.

That 76 Topps card is really a thing of glory.

I was thinking of dedicating a Saturday Night Five post to Oscar, but quickly realized I didn't have most of the cards I wanted to put in my Top 5. So I guess I'll use your comment section instead: