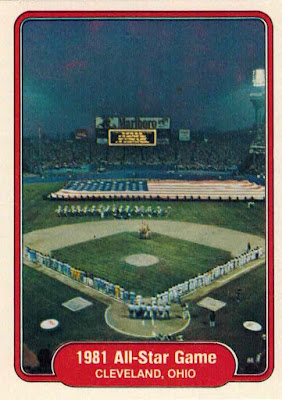 It's been about four-and-a-half years since I debuted the Short Term Stops theme on this blog.

Now I'm tasked with whittling those four-and-a-half years down to one single post, one single roster. For here tonight, I'll be presenting you with the best of the best: the All-Star Team. The brevity of the stints isn't necessarily the deciding factor in creating an eternal Short Term Stop (though the shorter, the better) -- it's more the sheer unfamiliarity than anything, however that unfamiliarity might manifest itself.

Before I start, I'd just like to thank all of you who have come along for the ride -- I hope you had as much fun reading these posts as I did writing them.

And now, here they are: The Short Term Stops All-Stars. 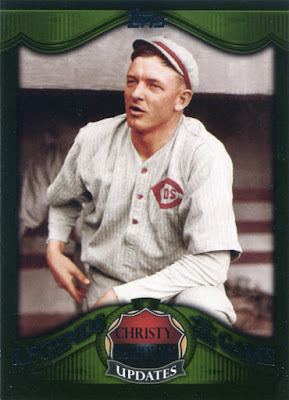 We begin with a hallowed one-game wonder in Christy Mathewson.

"Big Six" appeared in 636 games during his illustrious career, the first 635 of which came with the Giants. The 636th and final one came with the Reds in 1916, where he won a 10-8 "duel" with Mordecai "Three Finger" Brown (also his final game) to pick up his 373rd win, also the last of his career.

That one game may be a distant memory now, but it's certainly the stuff of legend when it comes to Short Term Stops. 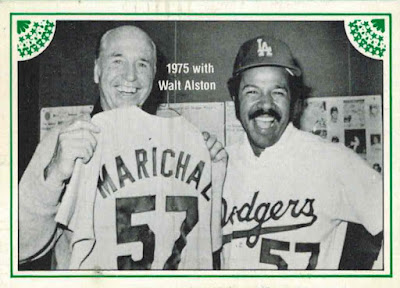 Juan Marichal is the lone write-in candidate on this team, as he didn't appear on the Dodgers' roster when I built their squad a few years back.

The only reason for that is that I didn't own this card at the time of my Dodger post, and my rules stipulate that I must have at least one card of a guy in a given uniform in order to be eligible for a Short Term Stops roster. So no Marichal.

Only later did I discover this magnificent specimen in a flea market dime box, the only card I have of Marichal in full Dodger garb. Obviously past his prime, Marichal retired after just two games with the 1975 Dodgers, lasting only six innings combined in those two starts and posting an awful 13.50 ERA.

It's a stint even more puzzling when you consider Marichal had literally taken a bat to the Dodgers only ten years before. 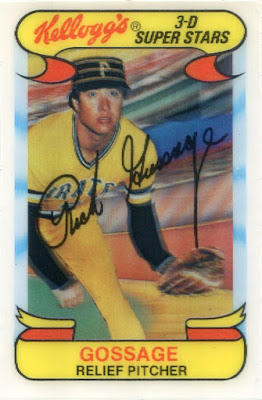 Goose Gossage makes the All-Star Team despite having appeared in a whole 72 games with the 1977 Pirates, which is something like a lifetime considering the brevity of the first two stints on this roster.

I think part of what makes Gossage's stint with the Pirates so unfamiliar to me is the fact that he never had a Topps card issued with the club: Kellogg's and Hostess were the only companies to document his brief -- and now legendary -- time in Pittsburgh. 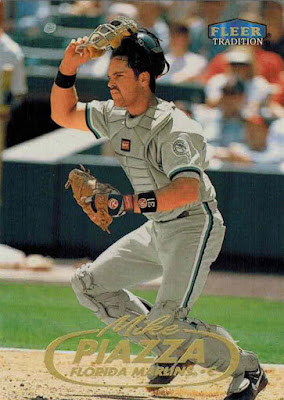 What more can be said about Mike Piazza's Marlins career?

I'd say it's far and away the most memorable Short Term Stop of my baseball lifetime, and what makes it all the more fascinating is that Piazza was at the prime of his career when he jumped from the Dodgers to the Marlins to the Mets, all in a span of eight crazy days in 1998.

Piazza's time as a Marlin lasted all of five games -- five games which will live on forever. 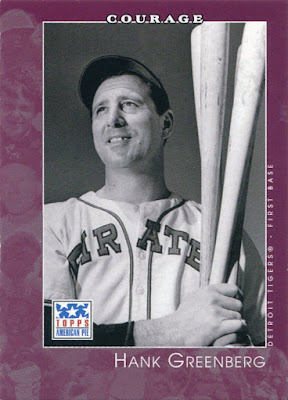 Whether one game (in the case of Christy Mathewson) or 125, Short Term Stops are exponentially more legendary if the player in question had, prior to that point, played his entire career with a single franchise.

As was the case with Hank Greenberg, who'd spent his first 12 big-league seasons with the Tigers before suiting up for the Pirates for his 13th and final campaign. It was a decent season for Hank: he'd post a .249-25-74 line, but decided enough was enough and retired after the '47 season.

It's hard to say for sure, but Hank Greenberg as a Pirate may be my all-time favorite Short Term Stop, and he's definitely a giant on this squad. 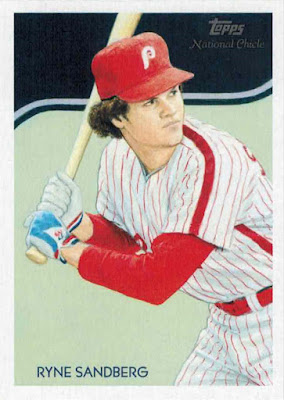 But the Mathewson/Greenberg Effect can work the other way, too: take Ryne Sandberg, who spent all but the first 13 games of his career with the hometown Cubs.

The fact that Ryno spent the remainder of his baseball life on the North Side of Chicago makes that brief cup-of-coffee with the Phillies all the more jarring. 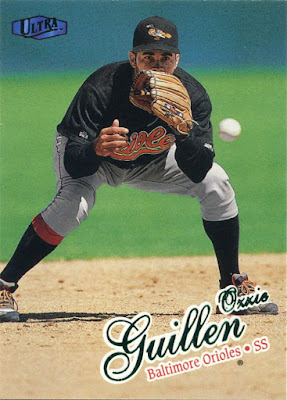 All I'll say about this one is that, statistically, it's probably the worst stint on the roster: Ozzie Guillen and his dazzling .063 average were released just 12 games into his Orioles career in 1998. 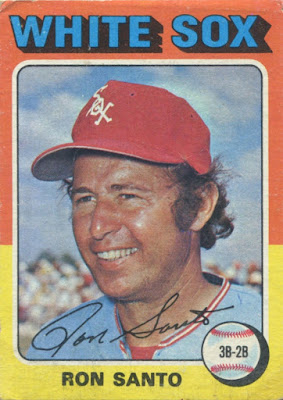 This should never have been allowed to happen -- plain and simple. 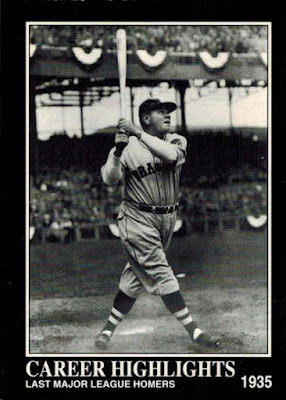 This may will be the most famous Short Term Stop in baseball history.

Babe Ruth, a man famous for his larger-than-life career on and off the ballfield, was an out-of-shape shell of his former self when he joined the Boston Braves in 1935. Not surprisingly, his performance fell off a cliff: he hit just .181 in 28 game with the Braves, clubbing the final six of his 714 career homers in the process.

This may well have been the first Short Term Stop I discovered as a young baseball fan, and I've been an avid devotee of unfamiliar uniforms ever since. 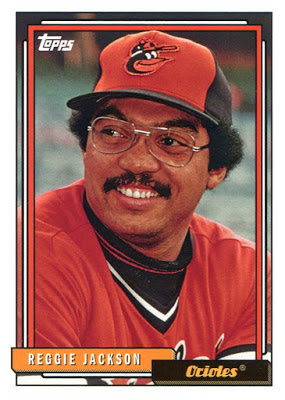 Reggie Jackson became a star during his time with the A's and a superstar after signing with the Yankees. Tucked in between those years, however, was an odd season with the Orioles that never gets talked about.

Though his 134 games with the 1976 O's are the most of any player on this roster, that doesn't stop Reggie's stint in Baltimore from becoming a cornerstone in the world of Short Term Stops. 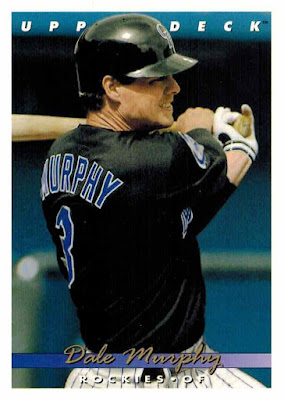 I admit it: part of the fun of collecting Short Term Stops comes from the miserable failures of once-great players at the end of their careers.

Dale Murphy is a prime example of this. I'm sure it was painful for a lot of fans to see Murph go out the way he did: he hit an anemic .143 in 26 games for the expansion '93 Rockies before retiring, a quiet end to a loud career.

But boy are his Rockies cards fantastic! 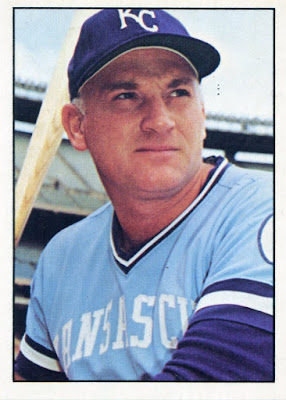 The DH position was the toughest choice for me to make on this roster, probably because so many former stars wound up becoming all-hit, no-field players in their golden years.

But in the end, I went with Harmon Killebrew, whose unspectacular sunset season (see: .199 batting average) with the Royals will never, ever look right to me. 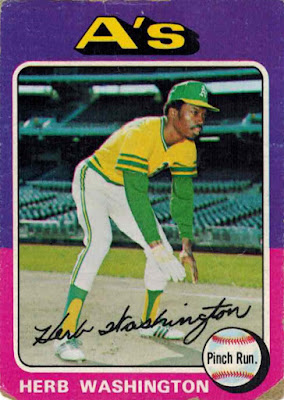 This is the only pinch-runner card in baseball history, and you better believe I was gonna find a way to sneak it into this post (because someone has to pinch-run for Babe Ruth). 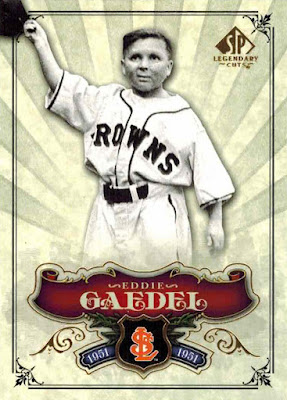 And finally, every good team needs a reliable bat off the bench -- who better than the 3'7" Eddie Gaedel, a man who's basically guaranteed to draw a walk in every at-bat?

You probably know the story by now: as part of a publicity stunt by none other than Bill Veeck, Gaedel was signed to a contract and appeared as a pinch-hitter for the lowly Browns on August 19th, 1951. Not surprisingly, he drew a walk on four pitches. Also not surprisingly, Major League Baseball banned any further stunts of the sort, ending Eddie Gaedel's career after one memorable at-bat.

So there you have it. The Short Term Stops All-Timers. While I've covered every team, this theme isn't quite done yet -- I've got a couple ideas for posts in the future (probably starting with notable Short Term Stops that were never commemorated on cardboard).

Now, and as always, thanks for tuning in.
Posted by Nick at 6:51 PM

So it looks like you need to find the 1989 Mothers Cookies card of Gossage as a Giant.

Way to sneak Herb Washington in there!

I still get stopped every time I see a player in an unfamiliar uniform while digging through boxes. That sounds so normal, but I whiz through a monster box in about 15 minutes so it's like slamming on the brakes.

Love this series...I've been going back and reading the ones from before I discovered card blogs, and I'll get through all of them before long. An ice laugh here with the PH and PR positions.

Dang. Piazza only played 5 games for the Marlins? Never would have guessed that. Great post!

Glad to hear you've got some ideas to keep this theme alive.

By the way, I have your Eric Hosmer Dime Box Dozen card. I'll send it your way shortly.

I would suggest that Julio Franco's 42 games as a Brewer should have gotten stronger consideration... but a great read nonetheless.

I'm sure Gossage today would call you a nerd for doing this post. That guy seems like the worlds biggest asshole.

This is why it's so hard being a fan in the DC Baltimore area. So many of these guys are great elsewhere and come here and do nothing. Happens even more in Washington. Don't know what that is about...

Boog Powell, 50 games 1st base Dodgers 1977 sunset season.I assume you didn't have a card of him in a Dodgers uniform,only one that I know of is 1990 target.

Enjoyed this series all the way through Nick. I can't disagree with a single choice you made for the All-Star post either. Awesome stuff!