Satisfying my sweet tooth at the flea market 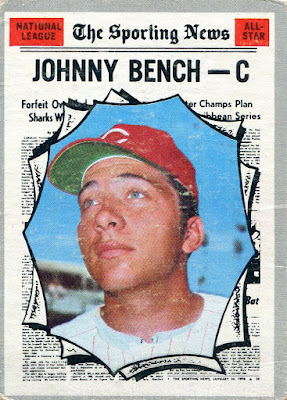 I had a rare Sunday off work this past weekend, and I did what any sane collector in my area would -- I took a trip to the local flea market.

Though the warm, comfortable weather provided a nice backdrop for my stroll through the aisles, I was initially worried that my morning would turn out to be a waste. The penny-box guy from last time wasn't around, none of my regular vendors had cards, and the people who did have cards were obviously out of touch with reality. (Example: I saw someone asking $50 for a 1985 Topps Ryne Sandberg. Yes: fifty, as in five-oh.)

But then I found a guy I remembered from my prior trip to the flea market, the one who sold me my '83 Fleer Tony Gwynn rookie. He informed me that his inventory was all new: in the span of the three weeks since my last flea market outing, he'd sold everything he'd had for sale the last time and had bought an entirely new collection. Talk about turnover.

He had five boxes on display this week, and the first few I dug through yielded mostly overpriced vintage, though I did manage to salvage this nifty '70 Topps Johnny Bench All-Star for what I thought was a fair price at three dollars. 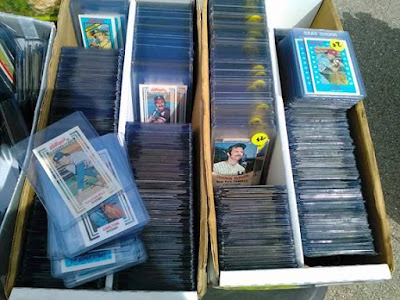 I had three $1 bills in my hand, ready to cash out my lone purchase and somewhat disappointed since, as great as the Bench was, I wasn't too excited at the thought of coming home from the flea market with one measly card in tow.

But that's when I moved on to the two boxes sitting on the right-hand side of the guy's table. And that's when -- as the flea market so often makes me do -- I just about had to rub my eyes to make sure I was seeing things right. My eyes weren't mistaken, and neither are yours: that is, my friends, two whole boxes of nothing but '70s Hostess and Kellogg's. Also known as Cardboard Utopia.

Needless to say, I immediately shoved those three singles right back into my pocket and went to work with 3-D stars in my eyes. 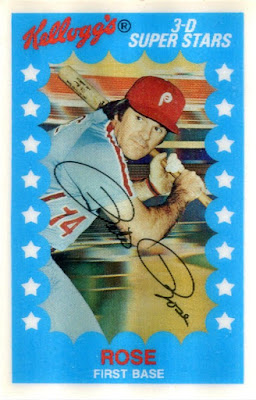 Unlike a lot of the other items the guy had on display, the prices here were first-class: the box on the left was all Kellogg's and priced at $1 each or 20/$15, and the box on the right was a mix of Hostess and Kellogg's at $2 each or 30/$20.

Counting the Bench, I picked up exactly 40 singles from his table for just under $40 total, which means I paid about a buck per card(!) for everything you'll see in this post, Charlie Hustle included. 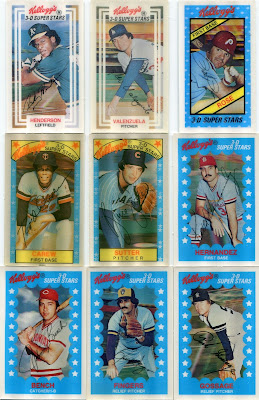 I'm still at a near loss for words over this find, but I'll say this: both quality- and quantity-wise, I can't remember seeing a better selection of '70s oddballs in one place, and that's counting the numerous card shows I've attended over the years.

I wasn't in front of a mirror at the time, but I must've been exuding excitement, because the vendor saw my face as I was digging through those boxes and said: I'll bet you wish you had a million dollars right now. And I did, because if money wasn't an option, I would've made an offer for both boxes in a heartbeat.

But of course, money is an option for a minimum-wage worker like myself, always: and besides, it's just a lot more fun hunting and pecking for the Fernandos and Sutters and Gooses (Geese?) of the Kellogg's universe. 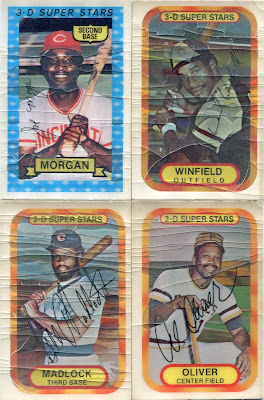 Most of the Kellogg's I found were in surprisingly fine shape for being 40 years old, but even the cracked ones were more than welcome in Dime Boxedonia for a buck a pop. 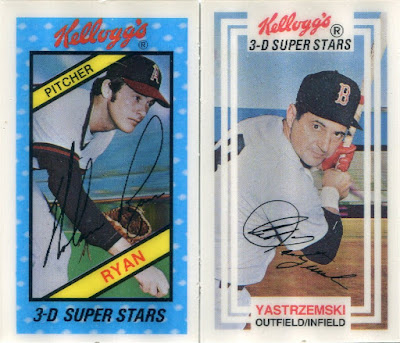 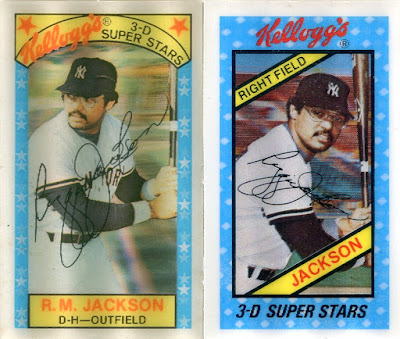 A couple Reggies, including the only card I've ever seen to list him as "R.M. Jackson" -- a nod to his full name, Reginald Martinez Jackson. These were the two oldest Kellogg's I found in those boxes, and you couldn't have scripted it much better since I've long been a devout fanatic of both of these guys (I'm just a fan of the Alou family in general).

Even better, these are the first Kellogg's cards I own of either Matty Alou or Harmon Killebrew -- though it is a bit curious, now that I think of it, that the latter didn't pop up in any of the mid '70s Kellogg's sets. 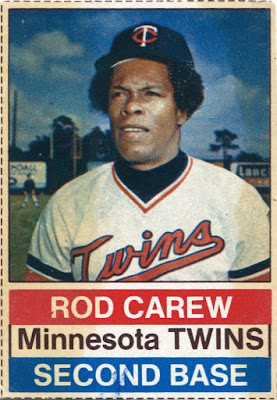 And, my god, we haven't even gotten to the Hostess yet.

Mr. Fuji recently wrote a post about his indecision on whether or not to start collecting Rod Carew. Now, as you probably know, I collect a lot of different guys, but I can say with utmost honesty that Carew is and will always be one of my favorites to chase after.

It's an event every time I find a new card of Rod Carew -- and that goes doubly so for a sweet Hostess card like this one -- so I say do it, Fuji. 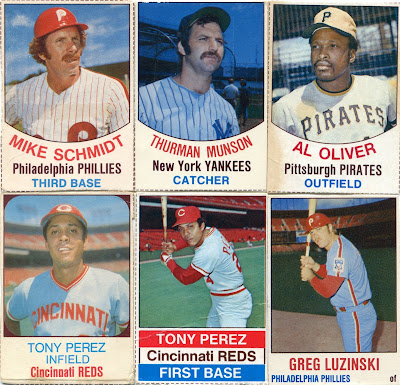 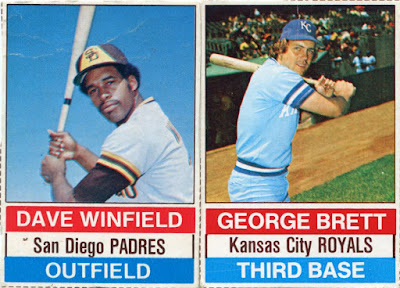 Early cards of a couple future stars on the best Hostess design of them all -- talk about steals at a buck a piece. 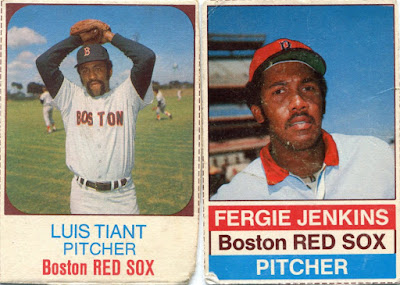 These Boston hurlers made for an especially exciting pair of Hostess finds.

I don't often get an opportunity to add new El Tiantes to the collection (look at all that green grass!), and there aren't many cards of Fergie with the Red Sox in the first place. 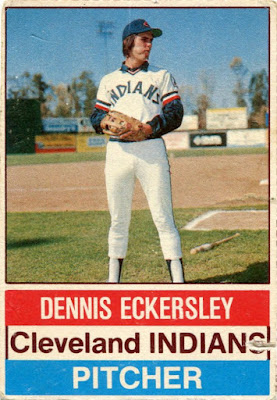 With such an alarming amount of '70s goodness in one place, it's almost impossible to pick a single favorite card of the lot, but for now I'll go with Eck here.

This is one I've actually been chasing for a while, and I can assure you that I nearly went into shock when it fell out of that $2 bin since it's one of the more desirable items in the Hostess catalog. I don't think anything from Hostess is officially classified as a rookie card by Beckett standards, but this is a rookie card to me: it was found on the back of Ho-Ho and Twinkie boxes in 1976, the same year Eck's Topps rookie hit the shelves.

Jesus, I really don't know what else I can say about my local flea market at this point. One week I find penny cards, the next I stumble upon giant boxes of Kellogg's and Hostess. And hey, I actually have this coming Sunday off work again, so you know where I'll most likely be. Who knows, maybe there'll be a '52 Mantle waiting for me this time.

That's how I got most of my Hostess and Kellogg's cards...all at once from the same vendor. That's an incredible feeling to be able to get so many at once for so cheap.
I remember as a kid looking under the Hostess boxes to try to find one with a Red Sox card on it and than begging my mom to buy it.

congrats on the great haul!

That's just fantastic! I know I'm not the only one who's massively jealous of your good fortune.

You can thank the Angels' Ron Jackson - who was on his lone Kellogg's card as "R.D. Jackson" - for the name on that 1979 Reggie card.

Two boxes filled with Hostess and Kellogg's? The entertainment factor of flipping through those boxes are worth at least a few bucks. Very cool find. That Eckerlsey rookie is a very nice find. Almost as nice as that Carew ;)

I am very jealous of those Red Sox cards you found, particularly the Tiant.