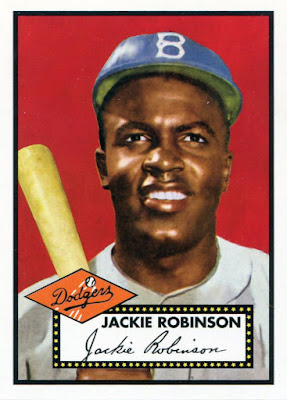 Today, as you probably already know, is Jackie Robinson Day.

All 750 players in uniform across the league are wearing #42 on this, the 70th anniversary of Robinson's first major league game. As the first modern African-American to play in the bigs, Jackie's impact as both a player and a person continues to leave a profound impact on baseball and society as a whole here in 2017.

When I think of Jackie Robinson, I think of the history courses I took during my school career. I've always been a history nut but, as a student, I admittedly grew tired of the repeated number of lessons on this battle or that war or that president. I looked forward to our Civil Rights units because, among other things, we got to talk about Jackie Robinson. We got to talk about baseball...in class. What more could a young baseball fan want?

I've yet to find a real Jackie card within my budget -- though I'm constantly on the lookout -- but I've accumulated enough modern Robinson treasures to compile a Top Five list in honor of Jackie Robinson Day. 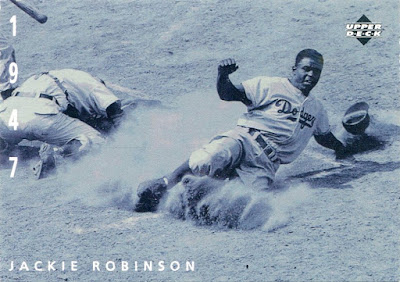 We start with one of the more educational baseball sets I've found: the 1994 UD Ken Burns Baseball series, which accompanied the phenomenal nine-part PBS documentary released that same year.

I received the set from my parents for Christmas when I was first getting into baseball cards, and I've treasured it ever since. It features many fantastic shots -- including this hard-nosed image of Jackie -- while also providing as complete of a history lesson about baseball as one could ever hope for.

I'd highly recommend picking up a set if you haven't already. 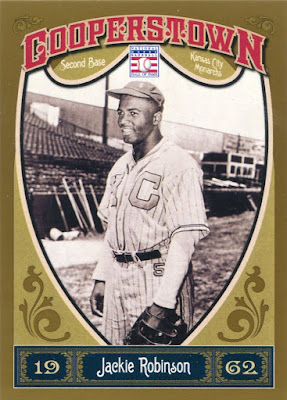 Here's a gem from the (sadly) defunct Panini Cooperstown brand.

Instead of producing another bland, logo-less shot of Jackie, Panini made a brilliant move by creating a rare card of Robinson as a Kansas City Monarch. It's a left-of-center Short Term Stop, as Robinson spent just a single season in the Negro Leagues (1945) before he famously signed with Branch Rickey and the Brooklyn Dodgers.

See? Panini can be creative when it wants to be. 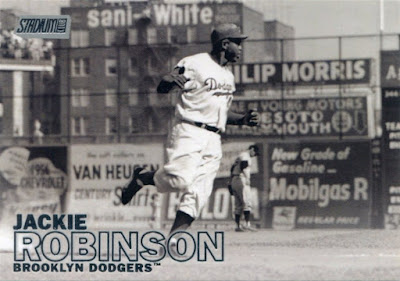 I've said much about this one already: it showed up in my Cards of the Year countdown for 2016.

When you couple a terrific action shot of Robinson and my fascination with old-time advertisements, you have something I'm sure to love. 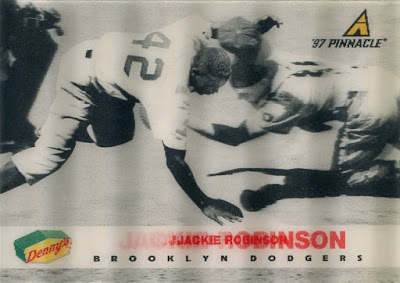 A staple of suburbs everywhere, Denny's earns the distinction of being the most unlikely candidate to crack this list.

But it's true: this is one of the greatest pieces of cardboard ever produced of Jackie Robinson, and it came courtesy of what is little more than a glorified fast-food chain. You don't often see black-and-white/3-D combos, and the 3-D effect gives the appearance that Robinson's cap is about to fly out and into your hands when you hold this card.

Denny's will never be one of my favorite eateries, but they sure hit a Grand Slam here (apologies for the wordplay). 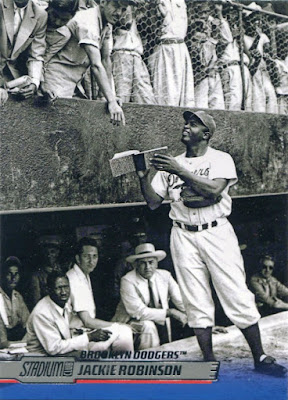 The photo pretty much speaks for itself, but what I love most about it is that I'd never before seen this shot prior to purchasing it. Robinson, more than just about any other player I can think of, suffers from the indignity of having the same three or four photos of his plastered on the majority of his baseball cards.

Not so with this one, an image that perfectly sums up the immense impact Robinson had on the game and the people who saw him play it: baseball became Baseball the moment Jackie first stepped onto Ebbets Field on April 15th, 1947.

Love the little Ken Burns set too. Pretty sure you have the other similar boxed set, Origins of Baseball. Great number 1. I wonder what other signatures are in that autograph book.

1. 1956 Topps
2. 2010 National Chicle
3. Denny's Lenticular
4. UD Masterpieces (the one featuring him stealing home against the Yankees)
5. Any of his Stadium Club cards

Both St Club cards are fantastically refreshing. I do get tired of the same old pics, we all do. I have all of your choices in my collection and hope the day comes when I own some truly old Jackie cardboard!