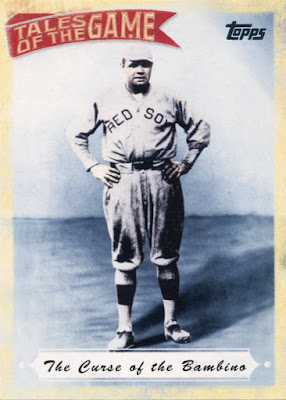 In a backwards way, Babe Ruth is so popular and well-known that he doesn't seem to get talked about much when it comes to baseball cards.

You don't really hear about people collecting The Great Bambino. It's just assumed that if you happen to obtain a card of Ruth, you're going to keep it.

He's always been a top-tier guy for me, but I haven't mentioned him on the blog a whole lot because how much more can you possibly say about a guy like Ruth? In baseball's rich history of larger-than-life characters, the Sultan of Swat was -- both literally and figuratively -- the largest. He was not only a game-changing player, but also a historical figure who (like Jackie Robinson) necessitated entire sections of history textbooks I read as a student.

I don't own any real Bambinos (obviously), but he has plenty of great cardboard out there, and I'm breaking my Ruthian silence by showing off my personal Top Five Babes this afternoon. 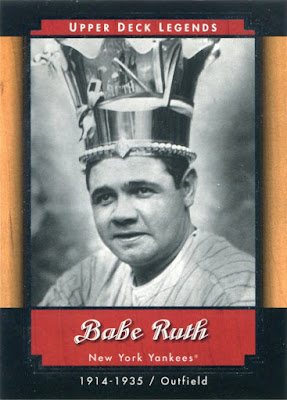 Though he (surprisingly) never won a Triple Crown, Babe Ruth was, by all accounts, the King of Baseball, and no card shows that better than this one. 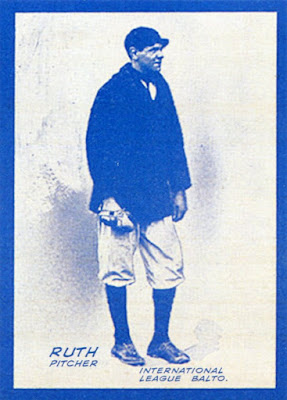 You don't hear about the one-and-done "CMG Reprints" insert set much these days, but I thought it was one of Topps' better recent innovations.

I am a self-confessed reprint nut, but even I get tired of seeing the same cards being reprinted eighty times over (enough with the '52 Mantles!). In 2011, Topps came up with the brilliant idea of featuring lesser-known oddballs from the game's earlier days.

Card #1 in the set is this 1914 Baltimore News reprint of a 19-year-old Ruth, often considered his rookie card. It features Ruth's brief stint with the Baltimore Orioles of the International League before being purchased by the Red Sox, and no more than 11 copies are known to exist.

If you have north of a half-million dollars to play around with, then you're in luck: you can shove the reprint aside and have your very own Babe Ruth rookie card! 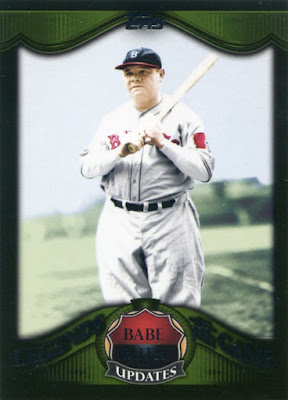 A post about Babe Ruth would be remiss if I didn't mention his ultimate Short Term Stop with the Boston Braves.

With promises to eventually become the team's manager, Ruth joined the perennial cellar-dwelling Braves for what would turn out to be his final season in 1935. The 40-year-old slugger appeared in 28 contests that year and hit just .181 with six homers (though three of them did come in a single game).

Babe never did get to manage the Braves -- or any other big-league team -- and his time with the franchise became one of the more fascinating footnotes in baseball history. 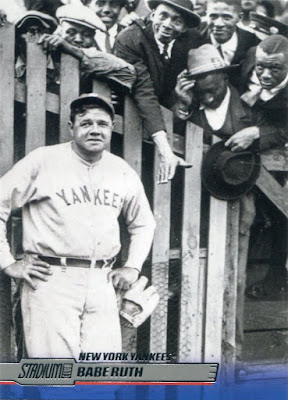 This gem was recently sent to me as part of Matt's siege on my Dime Box Dozen list.

As I said then, Ruth falls victim to having the same few images repeatedly recycled on his cards, but this one features a terrific outside-the-box shot that I probably would've never seen had it not been for Stadium Club. 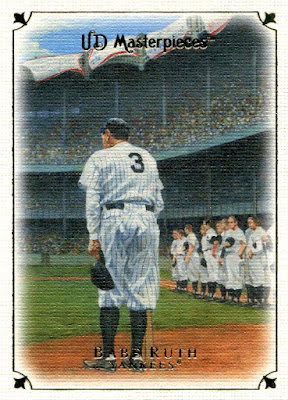 It's no coincidence that my favorite Babe Ruth card features a Masterpiece rendition of one of America's most iconic photographs.

The shot captures the final appearance Ruth ever made at Yankee Stadium, coming on June 13th, 1948, as part of a 25th anniversary celebration of "The House That Ruth Built." The Babe was ill and frail, needing the aid of a bat to walk up the dugout steps and onto the field. He'd pass away of cancer just two months later at the age of 53.

Perhaps the biggest disappointment of Upper Deck's baseball card licensing loss was the demise of their Masterpieces brand. It only lasted two years, but I'll be darned if it didn't feature some of the best, most elegant cards I've ever seen -- of both legends and current stars alike -- during my time in the hobby.

As he did throughout his life and career, however, Babe Ruth stands at the top, because this is, to me, the most masterful of all the Masterpieces.
Posted by Nick at 3:43 PM

Nice choice for #1. Miss me some UD Masterpieces. I have a small collection of Ruth... but like you... I've never really advertised that I collect him.

I guess it's true - I've kept most every Ruth card I've come across. One of the greatest with such a sad, early end to his story.

I don't tend to keep the Yankees cards, but I do go out of my way to find Red Sox cards of him. Obviously.