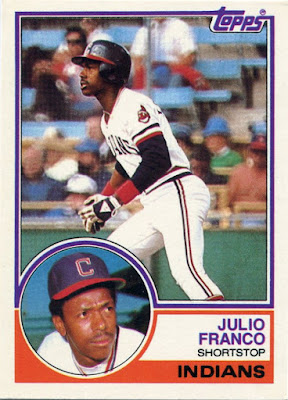 I hope all of my blogging buddies had a great holiday, but I have to say, Christmas didn't much feel like Christmas to me this year.

I don't know why. A large part of me can't believe Christmas has come and gone, and next week is New Year's. While I (like many) just want 2016 to go away already, there's still that feeling of where did all the time go? for me right now, more than any year I can remember.

Luckily there's been some relief to this blindsiding holiday stress, specifically in the form of an envelope I received from Gavin of "Baseball Card Breakdown" fame last week. While I usually like to write my trade posts in the order I received them, I had to expedite Gavin's because his "holiday blasts" have been the rage of the blogosphere lately.

Gavin kicked things off with this '83 Topps Traded Julio Franco rookie, a card I've been chasing for a while and one I believe I claimed from Gavin's blog a short time ago. 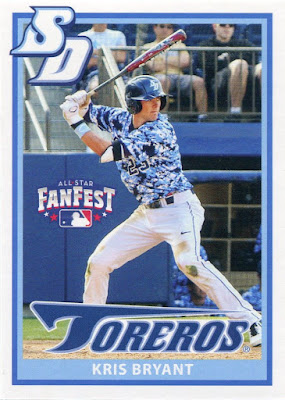 But the Franco was probably the only "standard" card in the envelope.

The rest was comprised of a mix of odd, sweet cardboard goodness that only Gavin can create, beginning with this FanFest oddball of Kris Bryant during his collegiate days at the University of San Diego.

I distinctly remember watching the 2013 MLB Draft -- and nearly jumping for joy when Bryant fell to the Cubs at #2 (over Houston's Mark Appel, a pitcher who is still in Triple-A in the Phillies' organization). 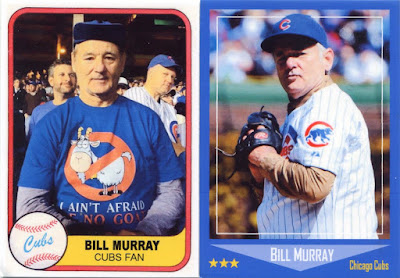 If you read Gavin's blog (or the blog of anyone who's received cards from Gavin), you probably already know about his affinity for creating customs.

I saw a couple other bloggers receive these Bill Murrays before me -- done wonderfully in both the '81 Fleer and '88 Score designs -- and prayed that they'd wind up in my mailbox as well. Well, that's just what happened a couple short days later. Call it a Christmas (or Festivus) miracle.

Now I can finally say there are Bill Murray cards in my binders and not be lying about it, because no way in heck do I have the budget to snap up his card from the minor league club he briefly co-owned. 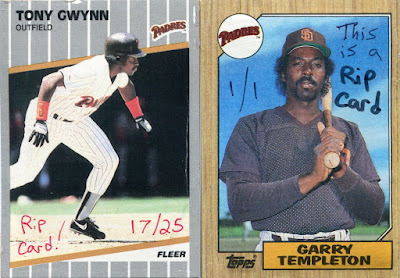 And now we've come to the star(s) of the show: Gavin's customary rip cards.

Gavin distributed 25 of the specially-made Mr. Padre rip cards to 25 different bloggers around the community, and I was lucky enough to receive a bonus 1/1 rip Garry Templeton rip card as well.

I couldn't believe my eyes when I read about some people waffling over whether or not to rip these. Are you kidding? Not that I rip cards at will or anything, but...the only question for me was which one to tear open first because, knowing Gavin, there had to be something awesome inside both of them. 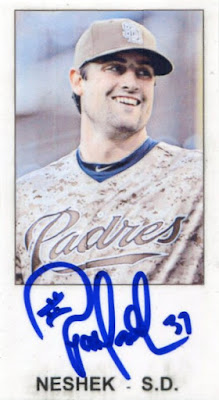 Why, it's a glorious Pat Neshek TTM!

Better yet, it's a TTM on yet another of Gavin's beautifully-made customs, a mini documenting Neshek's brief stint in San Diego. This is the fourth Neshek auto I've received via trade, but it's my far and away favorite of the quartet.

And, oh yeah, out of the second and final rip card fell... 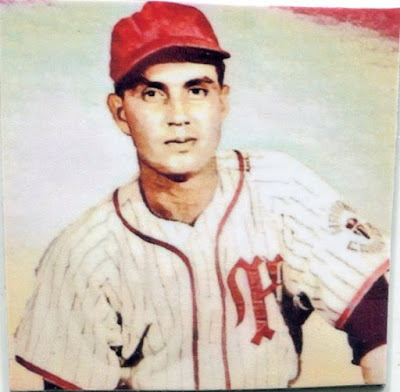 Gavin whipped up a bunch of magnets for his blogger buddies this year, and the one he sent me is now sitting below the Cal Ripken "F--- Face" I also received from Gavin on my refrigerator.

I knew this was Hoyt right away, but the uniform he's wearing really tripped me up. As you can see, that isn't the color or logo of any big-league team that I know of. It took about ten minutes of research, but I finally found it: turns out this is a shot of Hoyt during his two-winter stint with Havana in the Cuban League from 1950-52 before he cracked the New York Giants' roster in '52.

The best part of all this is the fact that I had absolutely no idea Hoyt ever pitched in Cuba before I received this magnet. So not only are Gavin's PWEs awesome, but they can also be quite educational.

Let's hope Gavin does these "blasts" next Christmas, too, because I know I sure enjoyed this much needed holiday pick-me-up here in 2016.
Posted by Nick at 6:06 PM

Glad you like!
I gotta admit I guessed on the color with the Hoyt, since the original photo is b&w and I couldn't find any representative color photos from the era for the team. But I figured the unfamiliar uniform would be a hit with you.

I love those RIP cards! The Neshek auto is superb!

The Templeton rip card is awesome! Sweet Neshek too!

Love the Neshek! Great stuff from Gavin as usual.