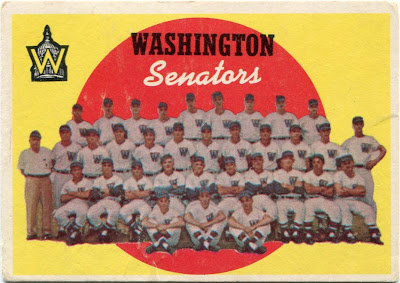 In case you missed it, I recently decided to revive the long-lost "Short Term Stops" theme on this blog.

Problem was, I wasn't exactly sure how I was going to set about doing so. I sorely wanted to change the one-card-per-post concept that I used during the theme's first go-around.

At first, I thought about ranking my five or ten favorite "STS" nominees from each of my team binders. However, I quickly remembered that I already have a list-based theme on this blog. I felt that might be a bit repetitive.

A couple days after I announced the revival, however, I came up with what turned out to be the "winning" concept. For the foreseeable future, I'll be nominating All-Short Term Stops squads for each respective team. Rosters will be comprised as follows...

Pitchers -- 3 nominees
Catcher, 1st base, 2nd base, shortstop, 3rd base -- 1 nominee each
Outfield -- 3 nominees
Other miscellaneous positions nominated at my disposal

I'll also bring up a few "honorable mentions" that didn't quite make the cut during each post. Also, with the exception of tonight's squad, I'll most likely split each roster into two separate day/night posts.

And, in case you'd like to pick up a copy for yourself, I'll also be including full info for each card in this theme. I know how much some of my similarly-minded readers enjoy these "unfamiliar uniform" issues.

As a little preview into how we'll be doing this, I thought I'd present an All-Defunct roster to my readers, comprising of my favorite "Short Term Stops" nominees from the Expos, Browns, Colt .45s, Pilots, and Senators.

So, without further ado, let's take a look at the All-Defunct "Short Term Stops" squad. 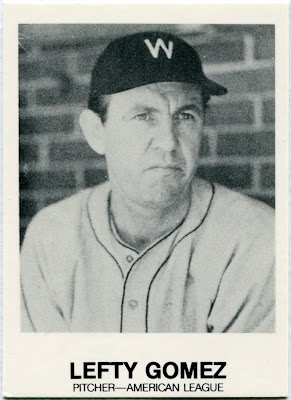 To tell you the truth, I can't think of a better card to kick off the festivities.

Only a select few self-defined "Ultimate Short Term Stops" cards exist in this hobby. By my account, an "ultimate" issue is one that features a "one game wonder", as we have with Lefty Gomez's one-game tenure with the Senators.

After spending his entire career as a Yankee, Gomez pitched in his final big-league game with the 1943 Washington Senators, giving up four earned runs in 4.2 innings and picking up the loss in his final start.

While it only consisted of one game, his tenure as a Senator will forever be enshrined on his Hall of Fame plaque. 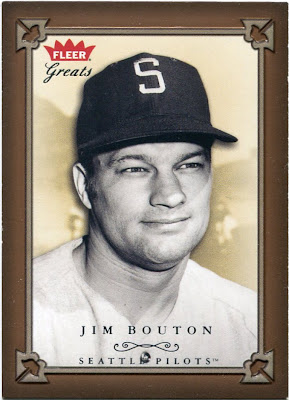 Technically, I guess all Pilots cards cam be considered "Short Term Stops" issues. After all, the franchise only existed for a single year.

However, while he was traded to the Astros late in the '69 season, the knuckeballing Bouton earns special recognition for his Seattle tenure for an obvious reason.

Much of his groundbreaking book Ball Four was penned during his stint with the Pilots. 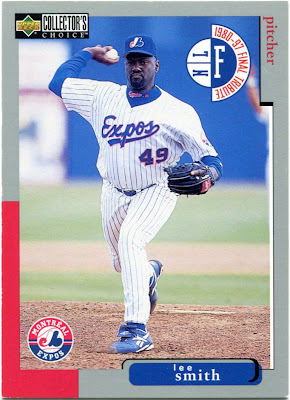 One of the first great closers in baseball history, Lee Smith played for seven different franchises during his 18-year career.

His final season with the Expos proved to be a less-than-memorable one, as he posted a 5.82 ERA in 25 games with Montreal, picking up five saves in the process.

Nevertheless, I've always thought Mr. Smith is deserving of a spot in Cooperstown. 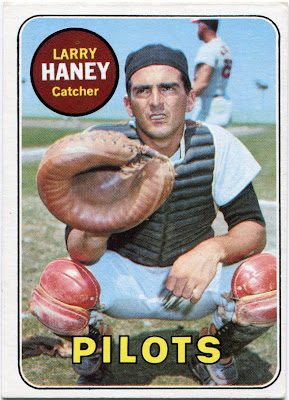 None of the defunct franchises had great "Short Term Stops" nominees at the catching position.

In the end, I went with Mr. Haney here. He spent just 22 games behind the plate for the Pilots before being dealt to the A's in June of 1969.

However, the real reason I chose to nominate him to the all-defunct squad is simple. 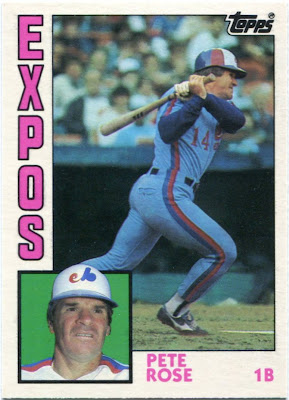 If such a thing is possible, Rose's Expos tenure is one of the more familiar "unfamiliar uniform" stints around these days.

On top of that, "Charlie Hustle" as an Expo will forever be one of my all-time favorite "Short Term Stops" topics.

After spending the first five months of the '84 season in Montreal (picking up his 4,000th career hit in the process), Rose was dealt back to the Reds, where he'd spent the majority of his star-studded career.

In my opinion, this is the surefire "All-Star" from this squad. 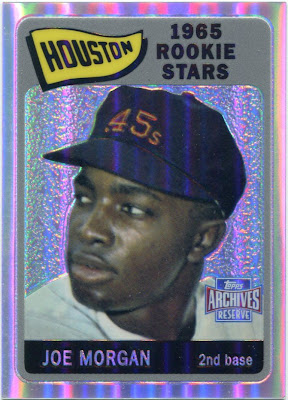 For these franchises, I've decided to treat each as a separate entity.

By that, I mean that I won't be lumping the Pilots and Brewers or the Colt .45s and Astros together. Each franchise has separate "Short Term Stops" nominees.

So, while Joe Morgan ended up enjoying a terrific Astros tenure, his time with the Colt .45s will be filed under the "STS" category.

And, while it extended into two separate seasons, I think Morgan as a Colt .45 is more than deserving of a nod on this squad. 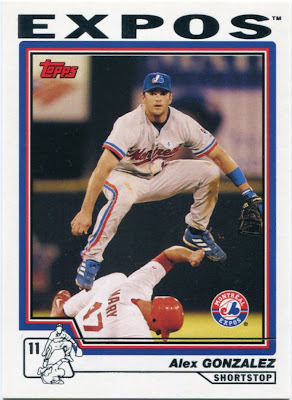 Only a handful players in baseball history have earned the (dubious?) distinction of having played for three teams in a single year. Alex Gonzalez is one of those few.

The 2004 season saw him play for the Cubs, Expos, and Padres. Sandwiched in between his two other stops, Gonzalez's stint with the Expos was immortalized on his 2004 Topps Traded issue, one that features a superb "double dip" shot, to boot.

It's one of the few "third-of-a-year" cards in my collection. 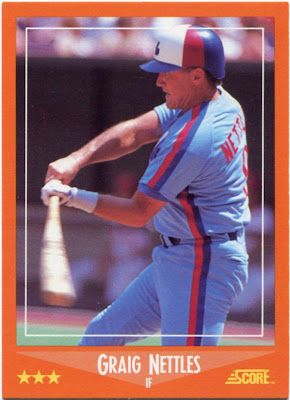 To my knowledge, Score was the only brand to issue cards featuring Graig Nettles as an Expo.

His '88 Score Rookie/Traded and '89 Score issues are the only Nettles cards in my Expos binder.

While he hit just .170 in his final year in the bigs with Montreal, Score was the only set to give him his true ride into the sunset.

I'll always appreciate them for that. 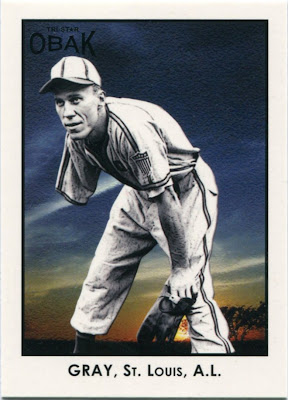 As most fans know, Pete Gray is one of the more interesting figures in baseball history.

While the World War II-related shortage of ballplayers certainly played a role in his call-up, the fact that a one-armed player made it to the majors is an accomplishment that will forever be remembered.

Gray's first and only big league season came with the 1945 Browns, hitting .218 during his tenure with the franchise.

Unfortunately, he hasn't had many cards issued over the years. This Obak piece is the only one in my collection at the moment.

Just another reason to love that set. 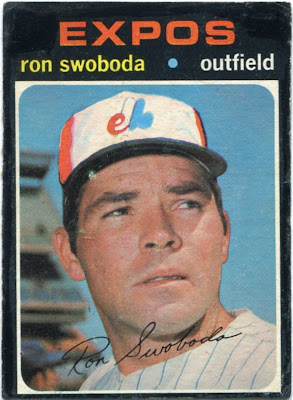 This card is what I like to call a collecting "double whammy".

For one thing, it's a vintage Topps high-number. And I'm sure most of us know how hard it can be to track those suckers down.

But, even more than that, it's also a dreaded short-print. A high-number and a SP, all rolled into one.

Still, luckily for me, I was fortunate enough to dig this rare piece out of a vintage discount bin for a mere $1.50 last year.

As far as I know, it's the only card that features Swoboda's long-forgotten tenure with the '71 Expos. He only spent 39 games with the franchise before being dealt to the Yankees in June of that year.

I, for one, never knew he was an Expo until I found this spectacular card. 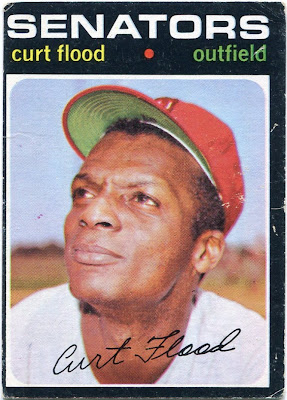 Flood sat out the entire 1970 season in protest of his trade to the Phillies, bringing his case against baseball's reserve clause to the Supreme Court.

The move paved the way for free agency in the mid-'70s, a distinction that would forever preserve Flood's name in baseball lore.

For a long time, I thought his career ended after that landmark case. Only recently did I find out about his abbreviated return to the game in 1971.

Flood spent just 13 games with the '71 Senators, a tenure which proved to be his first season as a big leaguer.

While the stint may not have been all that exciting, Topps was there to grant him a true "sunset" issue. 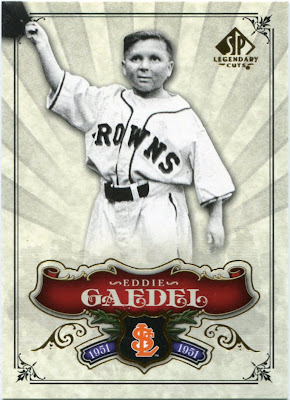 While you won't see the "pinch hitter" roster spot too often in this theme, any defunct team discussion has to include Eddie Gaedel.

As one of Browns owner Bill Veeck's many publicity stunts, the 3'7" Gaedel (sporting the number 1/8) pinch hit for his only career at-bat on August 19, 1951, against the Tigers.

Given his absurdly small strike zone, Gaedel unsurprisingly drew a four-pitch walk in what would be his only career plate appearance. He never had an official big league at-bat.

While I may make some minor tweaks here and there in the coming months, I think this whole "roster" concept should make for a fun series of posts.

Although this "defunct team" squad certainly had its fair share of all-stars, we've only just begun.

There's a lot more unfamiliarity to get to with this theme.

Hey! You beat me to posting that Rose card by a day!

Wow... a lot of Expos on this list. Capped off by that amazing Topps Traded Pete Rose. And I had no idea that Nettles played for them too.

I didn't realize this until today, but Randy Johnson pitched in just 11 games for the Expos.