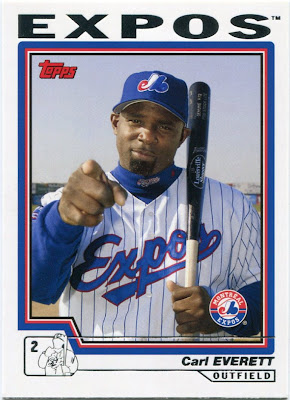 I've been looking forward to writing this post for a long, long time.

Tonight, it will be my great pleasure to finally reveal my five favorite cards from the "modern era" of collecting.

Yes, I'm a little sad that these posts will be over after this. They've been an absolute blast to write over the past few months.

However, I'm planning to launch my "Top 100 Vintage Countdown" sometime this summer, so I guess there is a light at the end of the tunnel.

Well, before we dig into the final five cards from the countdown, both myself and Carl Everett here would like to thank you, the reader, for coming along for the ride.

I hope you've enjoyed it.

On that note, let's dive right into this thing.

Here are my "Top Five" cards of the modern era. 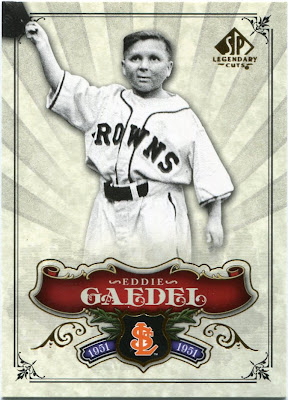 Baseball can be a crazy game sometimes.

Between one-armed outfielders and 15 year-old rookies, the sport has certainly seen its share of odd moments throughout its history.

For me, though, no single event was crazier than Eddie Gaedel's lone major league at-bat. Sporting the jersey number 1/8, the three-foot, seven-inch "rookie" walked in his "debut" against the Tigers on August 19, 1951.

Most baseball fans have seem the immortal photo of Gaedel on a multitude of occasions.

Although I've heard hints of others in existence, this is currently the only card of his in my collection.

Now, any card of Eddie Gaedel probably would've ranked pretty high in my countdown, without a doubt.

However, what put this one into the top five was the fact that it featured a different photo than the one we've witnessed a million times before. In fact, I'd never seen this particular shot of Gaedel prior to acquiring it.

It's almost like he's specifically tipping his cap to every single owner of this card.

The feeling is mutual, Mr. Gaedel.

We tip our caps to you. 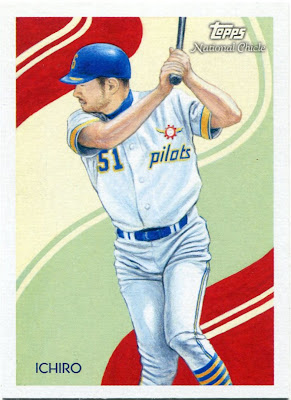 While I love the National Chicle brand, the thought of anything from the set appearing on this countdown seemed a bit farfetched to me at first.

That is, until I remembered this one.

As evidenced by its short-print status, this was not an easy card to track down in 2010. It took me quite a while to add it to my collection.

But, I guarantee you, it was worth the wait.

Granted, the folks at Topps didn't get their history entirely right. Despite their Seattle bases, the Pilots did not become the Mariners after their lone year of existence. They actually moved to Milwaukee and became the Brewers in 1970.

Factual accuracy aside, though, this card is nothing short of perfection.

Ichiro has long been one of my favorite players in the current game. At the same time, I've always had a deeply-rooted interest in the Pilots franchise as well.

To see Ichiro in arguably the greatest "throwback" jersey of them all is a sight to see, my friends.

While there are a boatload of terrific Ichiro cards out there, this would be the one I'd recommend to an aspiring collector.

This is the one I'd start with, bar none. 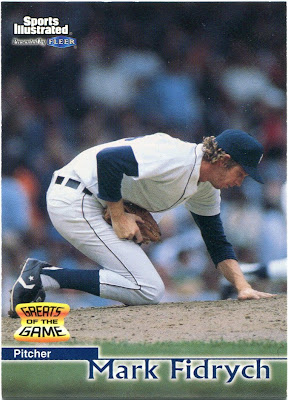 Yes, you can say I'm looking forward to attending the National this year.

Barring any unexpected mishaps, I should be there to dig through all the dime boxes I can.

If any of you are wondering about what exactly "National dime boxes" hold, I'll just point you to this one.

I snagged it from a 12/$1 at the last National here a couple years ago.

Quite a bit of time has passed since then, obviously. Yet I still can't seem to get over the fact that this card only cost about eight cents.

The "Top 20" in this countdown has already featured two of these '99 SI Greats cards with Ed Kranepool and Bill Lee.

Obviously, I probably don't have to tell you how much I love and appreciate Mr. Fidrych. I've mentioned it quite a bit throughout this blog's history.

I probably don't need to explain his quirky mound-grooming habits of Mark Fidrych, either. Chances are you know about them already.

Because of its legendary nature, I'm a little surprised that this is the only card I have of "The Bird" that features him on his hands and knees, in obvious "grooming mode".

Through all my baseball and collecting travels, I have never heard a single person say a bad word about Mark Fidrych.

I think this card pretty much tells you why.

The man was the greatest "face" the game could ever have. 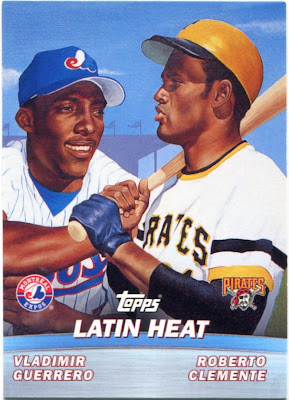 This card is infinitely special for a couple reasons.

For one thing, I've had it for as long as I can remember. It was no doubt one of the cards that first sucked me into the whole collecting business. So, I guess you could say that I have this card to thank for the existence of this blog, in a way.

More importantly, though, it features my two favorite players of the last couple generations of baseball.

I grew up admiring Vladimir Guerrero. I even tried duplicating his quirky batting stance a few times in Little League, although the results weren't all that great.

The only real competition he's received in recent years has come from Ichiro. Still, I think "Vlad" slightly beats him out in my mind.

And, of course, we have the other side of this card.

Roberto Clemente has always been my all-time favorite player in the history of the game. Both his on-field play and off-field demeanor spoke to me as a young fan of baseball. They still do, actually.

Needless to say, the joining of those two "forces" from my baseball fandom has the makings for one truly epic baseball card.

Unfortunately, Vlad and Clemente never had the chance to meet in real life.

However, that sense of the "impossible" is what makes this such a standout piece.

The time has come.

It is now my great honor to reveal the single greatest card from the "modern era" of the hobby. 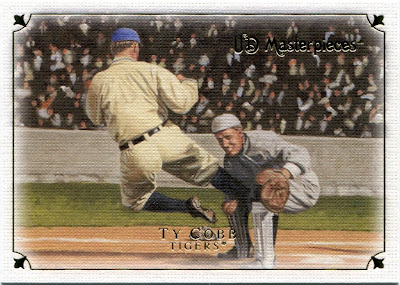 ...the "Georgia Peach" himself, Ty Cobb!

I guess it's appropriate that a Masterpieces card would earn the top slot in this countdown. It has certainly made its presence known throughout the earlier stages of my rankings.

More than anyone else in the history of baseball, Ty Cobb treated the game of baseball as a "war". He saw the opposition as his unquestioned enemy, something that has been well-documented in the past.

This card does an absolutely staggering job of showcasing that very fact.

His "spikes up" leap into the unfortunate catcher here tells you everything you need to know about Ty Cobb.

I have a deep appreciation for "play at the plate" cards, but none of the other ones I've seen can or will ever come even remotely close to this one.

A true "masterpiece" in every sense of the word.

It is my absolute favorite card of the "modern era".

There it is, my friends.

I hope you've enjoyed the ride.
Posted by Nick at 7:23 PM

I got really excited for a second when I saw that Carl Everett card. Not only is he one of my guilty pleasures, but I just got the chrome refractor version of that very card at a card show this past weekend.

That factoid aside, this is a truly amazing top five, man. Great job on what had to be an excruciatingly difficult task. Your top choice is especially tremendous.

I sure miss that Expos red-white-blue logo, whatever the heck it was.

Love #2. #1 is sweet, but that Guerrero/Clemente card is darn near perfect.

@basesetcalling: it's an m with an "e" at the front and a "b" at the end. Stands for Expos de Montréal Baseball

Great countdown! I enjoyed thoroughly. I thought about doing my own countdown on the greatest and favorite cards of my own collection...There you go inspiring again!