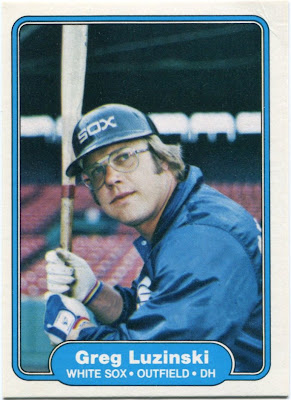 There are lots of ways to make a quick buck in this hobby.

I've seen a lot of them in my card show travels over the years.

For example, there's the whole "heavily discounted" scheme. I can't tell you how many times I've come across this one.

A vendor will have a giant sign noting that anything in a particular box is whatever percent off the marked price.

People instantly think, "Wow, 80% off? I must be getting a good deal here."

Trouble is, almost every marked price is the given "book value" for the card. Although 20 percent of "book" is a decent deal, it's not the "steal of the century" that vendors would have you believe.

That's been the case with about 99 percent of these types of "deals" I've seen.

However, probably the single most effective selling tactic I've come across involves what I like to call the "hometown inflation" factor.

I'm sure most of us have seen it before.

Simply put, vendors like to jack up the prices of cards that feature our hometown teams.

Around these parks, Cubs and White Sox cards are priced at a premium.

I can't say I blame vendors for using this tactic, though.

A lot of collectors are willing to pay the extra cash for cards of their local heroes. It's a very basic aspect of collecting.

The highest I'm likely to go on a hometown box is about a quarter. If it's any more than that, I won't even flip through it. Even a quarter is pushing it.

Occasionally, however, I'll come across someone who has Cubs/Sox dime cards on display, ones that are separated from the other Padre or Indian issues purely for the convenience of the buyer.

Often times, it's a good indication that you've got a trustworthy vendor on your hands, one who simply wants to keep an eye out for the many Chicago sports fans out there.

A vendor at the local flea market often puts out a little box of 12/$1 Cubs/Sox cards for local fans to browse through.

It's how I nabbed a card of "hometown hero" Greg Luzinski for a mere eight cents. 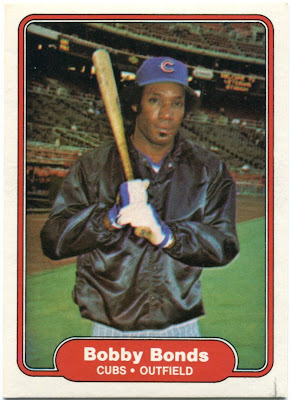 A couple years ago, I came across a vendor who offered a similar "deal".

It was simple enough. One gigantic box of assorted Cubs/White Sox cards on display, labeled with three of my favorite words in the English language.

I found an absolute myriad of cards in that dime box dig. What made it great was that it covered nearly the entire history of Chicago baseball.

Everyone from Luke Appling to Bruce Sutter to Frank Thomas was a part of that dime box. (John Kruk even made a quick appearance.)

However, I have to say that my absolute favorite "find" from those dime cards was the above '82 Fleer Bobby Bonds, one of his two true "sunset" issues as a Cub.

The wildly out-of-focus shot is quite indicative of early Fleer.

That's what makes it so terrific, though.

Whenever I see a box of overpriced hometown guys, I breeze right past it. Although there might be a couple cards I can use inside, I'm often not willing to pay the premium price they entail.

From past experience, I know that there are great vendors out there with Cubs and White Sox dime cards. I often find myself saving my budget for those.

After all, a dime is a small price to pay for some of my favorite hometown heroes.
Posted by Nick at 1:43 PM

Another way to beat the system, import "hometown" cards from other parts of the land, then BECOME the guy jacking up the prices!

Dodger cards have a huge mark up in LA. It is cheaper for me to find some trade bait for other bloggers.

I noticed the "hometown inflation" ages ago. I still have to deal with it a bit at my LCS (I haven't been to it for a while need to go again sometime soon). As a Skins/Nationals/Capitals fan I really shouldn't be living in Suburban Maryland. On the other hand sometimes living in the hometown means getting stuff of your fave teams that are only available locally.