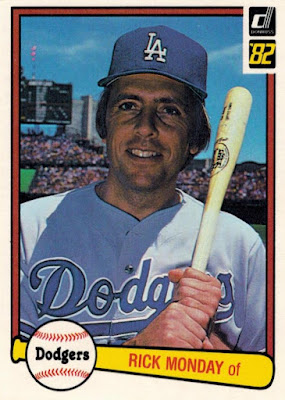 I see the question asked all the time around card circles: what are your biggest personal regrets as a collector?
The question is, of course, usually framed and understood in a monetary sense. People trading/selling cards of prospects before said prospect became a star, etc., etc. A better question would be: what's the most money you lost collecting cards? I once owned the illustrious 2011 Topps Update Mike Trout rookie, and its liquorfractor parallel, but I sold them both a long time ago for a small fraction of what they're worth now. Would I like that money? Sure. But do I regret it? Not really -- I got what I wanted at the time, and it's not like I could've known how huge that particular bubble would get.
To me, regret works much differently, and is nowhere near as monumental as most people's definitions of it -- in my experience it's way more about the things I didn't do rather than the things I did. 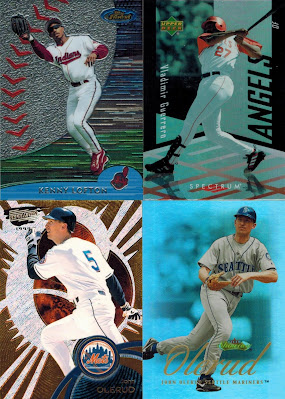 It's true that I once sold a Mike Trout rookie for almost nothing -- but as far as personal anguish goes, I'd rank the years I spent ignoring cards from the 1980s higher on the regret-meter higher than anything involving that Trout.
When I was a kid, I either wanted anything that was brand new, or really old (i.e. vintage) -- '80s cards fell in between the two extremes, and were thus pushed aside. I've done by best to close those gaps since, but I'm still missing quite a few obvious '80s cards in my present-day collection, thanks to those years of ignorance.
Which makes me thankful people like Jeff of "Wax Pack Wonders" are so quick to patch those holes when I put them on my Dime Box Dozen list, as he recently did with the '82 Donruss Rick Monday at the top of this post that fell through the inevitable cracks of my collection for so long. 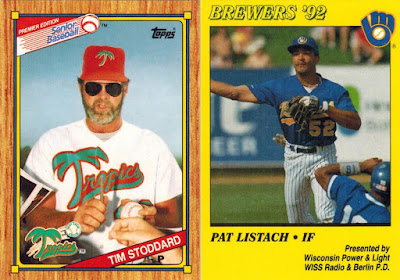 Jeff's been sending me cards for a while now, and while he hasn't blogged in a couple months I'm hoping it's more of a hiatus rather than a permanent pause.
Whether he's blogging or not, Jeff always seems to come up with cards I need -- oddball mini-collection hits this great make me regret not starting mini-collections a long time ago. 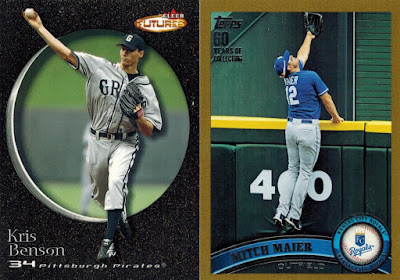 A couple mini-collection parallels here -- only problem is I still need the base version of that magnificent Kris Benson. 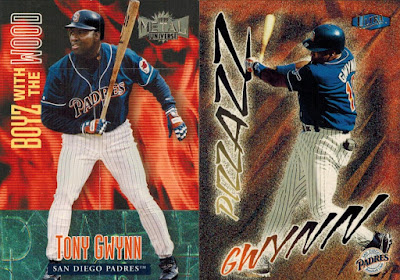 I regret not knowing about an insert set called "Boyz with the Wood" until way too recently. 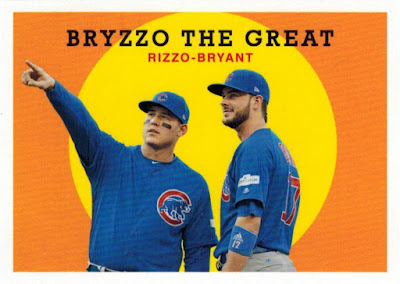 Bert of "Swing and a Pop-Up" fame -- another blogger-on-sabbatical -- reached out to me not long ago, saying he'd be able to help with some of my recent Topps Archives needs. 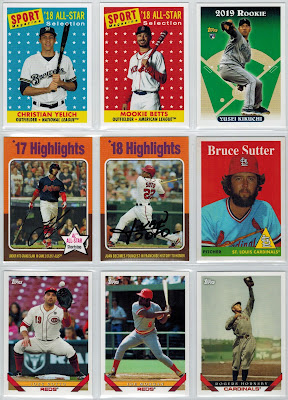 Packages like this make me regret the years I spent not maintaining a want list -- because deleting a large chunk of numbers from my needs sure is satisfying. 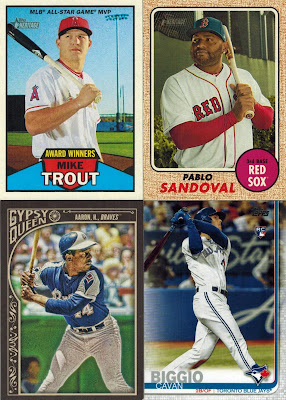 Bert included a bit of other miscellany from my want lists, and even hit a Dime Box Dozen need with that Cavan Biggio.
I know I had that card at one point -- I must've sent it to someone somewhere along the line, a decision I kinda regretted when I decided to start collecting him and found I didn't have a second copy of it in my dupe boxes. 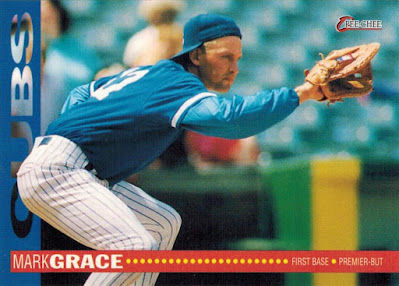 Lately I've regretted not tracking how many Dime Box Dozen needs you wonderful readers have taken care of in this blog's history -- I imagine the number's pretty high up there by now.
You can add one more notch to that list with this '94 OPC Mark Grace, generously sent to me by John of the relatively new "Adventures of a Baseball Card Collector" blog -- I collect Grace anyways, but the goofy photo catapulted it to an all-out need. 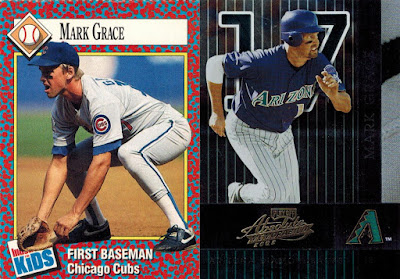 John was even nice enough to throw a couple more Gracies into the mix, including one from an early '90s SI for Kids set that always gives me the warm fuzzies. 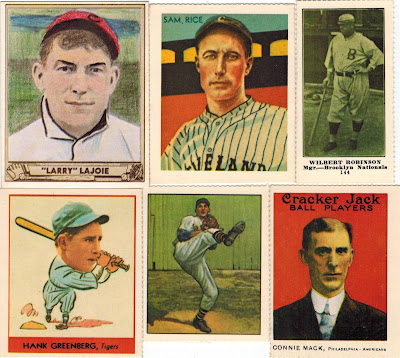 It's an honor to say that I was the second party to John's first trade on the blogs when I sent him a stack of cards in exchange for a handful of reprints he unearthed at his LCS.
I don't remember my first blog trade, but I know I was hooked right from the start -- and almost instantly regretted all the years I spent making dull book-value trades on the forums. 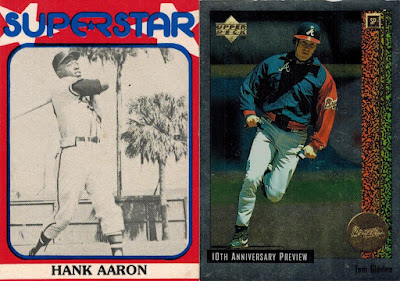 I dunno if anyone else does this, but sometimes I regret already having a cool card when someone sends me a second copy of that cool card.
That TCMA Hank Aaron would've been the surefire centerpiece of the cards John sent me...if I didn't already own a copy of it -- I actually thought to myself, oh man, I wish I didn't already have this! 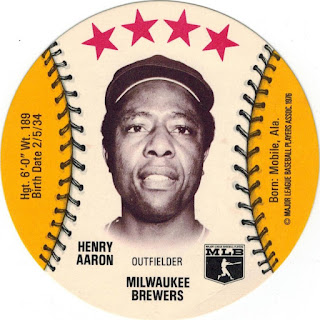 I also recently received a second huge box in the mail from reader Mike W., who some of you may remember from the first amazing box o' cards he sent me a while back.
There were quite a few surprises for me in there -- namely this Brewer-era Hank Aaron oddball -- but one thing I didn't expect to see fall out of Mike's box was a random stack of vinyl 45s for my dad (which I want Dad to write a guest trade post about soon). 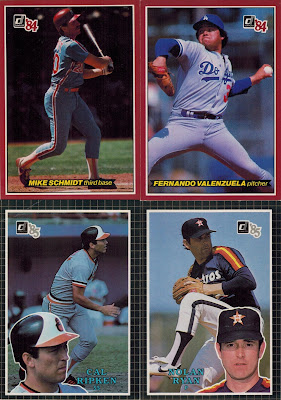 I've never been huge on oversized cards, mostly because I still haven't quite figured out how to store them.
Problem is, I've ignored them for so long that I've overlooked a lot of stuff I need for some of my bigger player collections, like this quartet of oversized oddballs. 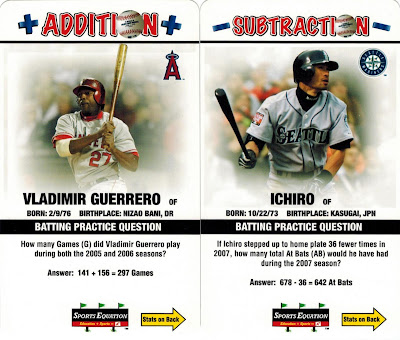 Today on Is This A Baseball Card? -- flash cards?! 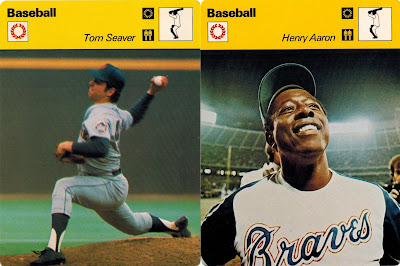 My general apathy towards oversized doesn't extend in the slightest to these '70s Sportscasters cards -- they're awesome, and I don't think anyone's ever sent me any via trade before this.
(One thing I don't regret is the Hank Aaron theme this post has unwittingly taken.) 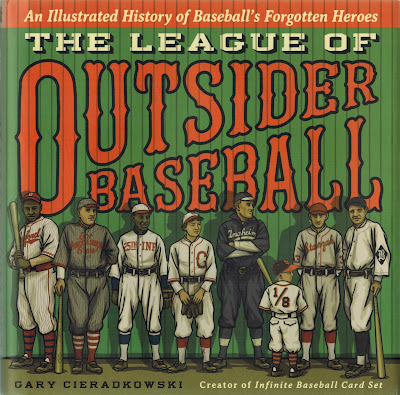 I noticed the box Mike sent me had quite a bit of weight to it, which made sense because, in addition to Dad's records, I found a book inside!
While Mike couldn't have known it at the time, passing this book along corrected a huge regret that's been sitting with me for a while now. I ran the sports section for a brief time at my last used bookstore gig, and we got this same book in stock one day. I debated whether or not I wanted to buy it for myself, and, for some reason, I passed and put it on the shelf.
By the time I came to my senses and went back for it, the book was already gone, and I've never seen it since. Until Mike sent it to me out of the blue, that is. There's nothing quite like the feeling of lifting the weight of a once-heavy regret, and the stuff I've shown in this post was like an avalanche being carried off my back.
Whether it's books, baseball cards, or whatever else, I've started to realize that collecting is basically just a prolonged series of smaller regrets we do our best to rectify over time.
Posted by Nick at 5:30 PM

Quite a post! I too like the Aaron theme, and wouldn't have any problem having doubles of any of those Aaron's you showed!

I love my oversized cards. But I feel the pain of storing and displaying them too. Tough tradeoff.

Boyz with the Wood is a great looking set! I have a couple, but am on the lookout for more.

And my biggest regrets would probably be 1. not buying a ton on 86-87 fleer basketball when they came out. They seemed weird to a baseball collector. Basketball?? And 2. giving away both of my Mike Piazza Bowman RCs a few years back. I don't regret the giving, they went to good homes. But there's a big Piazza size hole in my collection now. I think I figured I'd run into another someday, but that hasn't happened.

Glad you liked the cards! I've read the League of Outsider Baseball a couple times before, and I really like it. It's the book which introduced me to the wonders of Steve Dalkowski, Frankie Zak, and other glorious misfits in the history of baseball.

I said this on Fuji's blog: I don't waste time regretting things in the hobby. Easy come, easy go.

I gave away the Trout liquorfractor as a prize. I haven't spent a day wishing I didn't do that.

I'm still around, but yeah on hiatus from posting. Maybe once baseball season heats up again.

I def. have hobby regrets. Not many, but some most memorable ones. Like giving away a pack/set pulled certified Mantle autograph. Stupid of me. Or like when I got rid of my 17 unique Mantle playing day cards a few weeks after his death. Or when I traded a 51 Bowman Mantle. Yeah all dumb moves on my part, but when you've collected as long as I have where you change your collection up from time to time.... it is going to happen.

That Vladimir Guerrero is a nice looking oddball card - too bad about the Trout but that's part of the collecting journey.

My biggest regret was when I visited Los Angeles for business back in the early 2000's. One free day, I decided to take a stroll around Beverly Hills since I had never been there before.

To my surprise, I stumbled across a baseball card shop, so I decided to go inside. I began a friendly conversation with the owner. Out of nowhere, he showed me a complete 1971 Topps set in very good to excellent condition in a binder. Incredibly, he offered me the entire binder for a song, I mean less than a C-note!

All these thoughts began racing inside my head, like, how do I bring it back to Chicago? Is the set somehow a fake? Is there a catch? Then, I can't explain why, I only bought a pack of the current Topps set, shook his hand and left -- with 1971 Topps binder still with the owner. I have had many sleepless nights over this Hall of Fame blunder.

Back in 1984 at a junk shop. I found a 54 tops hockey set. There first for 4 dollars. I traded it a few years later for some 1950’s Detroit tigers cards. I know it’s with quite a bit now. The good always out ways the bad . I have so many fond collecting memories

"I got what I wanted at the time, and it's not like I could've known how huge that particular bubble would get."... I like that! I wish more folks on the Twitter could share that same sentiment.

I'm impressed by people without any regrets, and even by those with very few. I'm in the Fuji camp on that topic. I've got some strategies for that, which help.

The League of Outsider is a fantastic book (some years ago I wrote about it here:
http://1975baseballcards.com/why-the-league-of-outsider-baseball-is-worth-reading/ sharing in case anyone might enjoy the read). Like GTT I also learned a lot and it led me on a few collecting adventures.

man, i am filled with regrets on a daily basis. Good for you in being able to let go of those things.

My biggest hobby regret is leaving the hobby for a few years and coming back only to find out how much i've missed. Love the opportunity to catch up though. It's a hobby that never ends.

My only collecting regret is the years I missed not collecting. But I’m back now better than ever