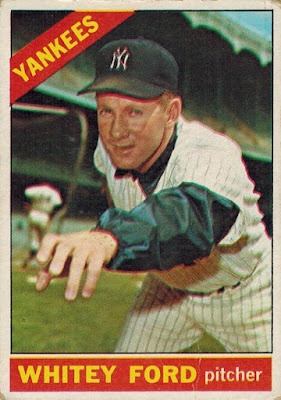 Whitey Ford, one of the last surviving members of the '50s and '60s Yankee dynasties, died earlier this week at the age of 91.
I don't know if it's my imagination or not, but it's always seemed to me that there's long been a huge discrepancy between Whitey's fame and the amount of attention his baseball cards get, perhaps more than any other household name. I rarely see him mentioned anywhere in collecting circles. Unlike other Yankee greats of his era like Mantle and Maris, I couldn't tell you what some of his late '50s/early '60s cards look like, because I'm not sure I've ever seen them.
As is always (sadly) the case when a legend passes away, I made a deeper dive into my Whitey Ford collection recently, and I figured it's a good enough excuse to revive my long-defunct Top Five theme around here, which I've been wanting to do for a while. The concept is simple enough: I pick a player and post my five favorite cards of said player, good for easy posts since I haven't had a lot of time or energy to devote to the blog lately.
Even if it's just in my head, I figured it's high time Whitey's cards got some attention, so here's my Top Five list in honor of the late Yankee great. 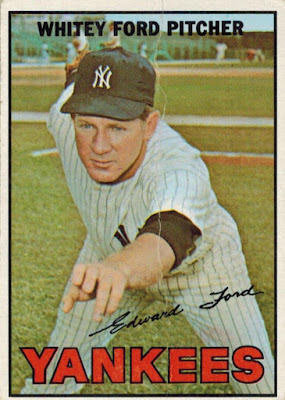 #5 -- 1967 Topps #5 Whitey Ford
Whitey's sunset card, and one of the first big final tributes I added to my collection -- a beautiful card even with the crease.
I guess someone at Topps must've really liked the way Whitey looked in that faux-follow through pose -- arm extended with middle and index fingers poking out a la Moe Howard -- because they used it on each of his last two cards. 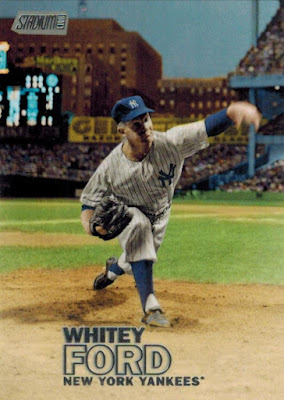 #4 -- 2016 Stadium Club #50 Whitey Ford
It's darn near impossible to find night cards of '50s Golden Age greats like Whitey, so this beauty from Stadium Club (of course) is truly a godsend. 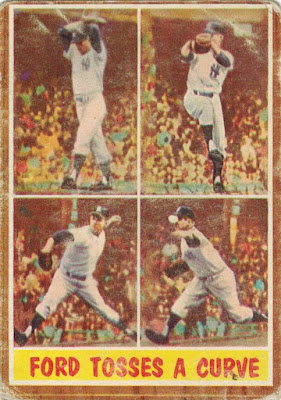 #3 -- 1962 Topps #315 Whitey Ford IA
This '62 Topps in-action subset is a lot like Whitey's cardboard catalog, in that I feel it's unfairly overlooked most of the time.
These are fantastic, and very much unlike anything else issued in packs of baseball cards at the time -- plus they predate the more famous '72 Topps In Actions by a full decade. 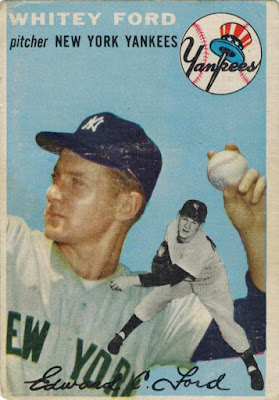 #2 -- 1954 Topps #37 Whitey Ford
I don't think I ever posted about it on the blog, but Dad surprised me with this gargantuan find last year, which I think he bought through an auction site he randomly stumbled upon.
This is a full five years older than the next-oldest Whitey I own, and while I've never been a huge fan of '54 Topps, that takes nothing away from the joy I get out of this card. 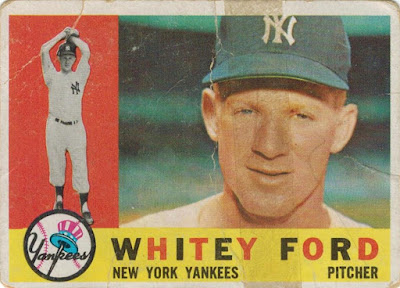 #1 -- 1960 Topps #35 Whitey Ford
I never really put it together before, but Dad's had a mighty impact on my Whitey Ford collection, because he's the reason I own this card, too...albeit under far more fascinating circumstances.
I've told this story on the blog a few times before, but I'll tell it again because I think it's a fun tale. I don't recall exactly how old I was at the time (probably 5th or 6th grade), but I remember my dad getting home from work one day and handing me a stack of random cards out of nowhere. From what he said, a few kids in town had set up a lemonade stand, and for whatever reason, they were selling baseball cards on the side for a few extra pennies. My dad rounded up a stack he thought I'd like, and paid a whole two dollars for it.
This 1960 Topps Whitey Ford was in that stack of cards(!). I wasn't too hip to card values and such at the time, but even then I knew it was out of the ordinary, and definitely something special. Over time that story has grown into a kind of legendary chapter in my collecting history, and because of that, this creased, taped, and mangled Whitey Ford would definitely be a member of my personal cardboard Mount Rushmore.
Now that I think of it, maybe Ford's cards feel ignored to me because of how big of a role they've played in my own collecting history -- either way, rest easy, Whitey.
Posted by Nick at 6:05 PM

All those look great..and yeah,I still don't know how that card got in a pile of 70s-90s cards at a lemonade stand,haha!!

Love all of these vintage Fords. I don't have too many playing year Fords, but one of the ones I made sure to add to my collection was the 1960. Love that card.

I remember setting up a lemonade stand in front of my house with friends... and we sold cards too. Never seen any one else in my lifetime, but I'm sure glad your father did.

Nice tribute, and I especially liked your story!

Nice Ford collection. I might try sometime to get a run of his Topps cards, (checks prices) or then again maybe not. He has a lot of nice cards though.

Some truly good looking cards! I only have the 60 topps myself.