The best cards in life are free 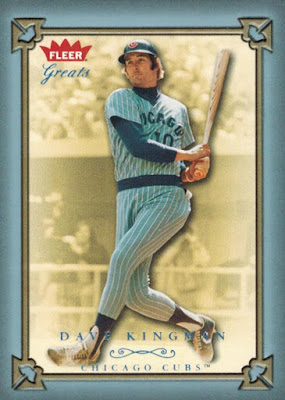 I'm not sure why, but I still feel a twinge of guilt when I claim free cards from people.
I know I shouldn't. It's not like I'm taking advantage of anyone -- after all, these cards were posted with the sole intent of being given away. Plus, I've been on the giving side of Free Card events before, and I can honestly say that they were a treat to host, for a couple reasons. One, it got unwanted cards out of my room, and two, it found good homes for those cards. I wanted people to take stuff from me, so why the insecurity when I do the same?
I think some it is knowing that I've been awful at returning the favor lately. I get that Free Card stuff is given out with no strings attached, but I feel weird if I don't at least try to send something back at some point. I'm looking to rectify that soon -- I'm planning on putting some packages/PWEs together in the near future, as well as revive my Free Card Friday posts once I have a little more time on my hands.
None of this insecurity, however, has stopped me from claiming cards from bloggers over the past couple months, because some of the cards you've been giving away have been too darn good -- like this sweet Dave Kingman (numbered to a scant 79 copies) I received gratis from Jon of "A Penny Sleeve for Your Thoughts" recently. 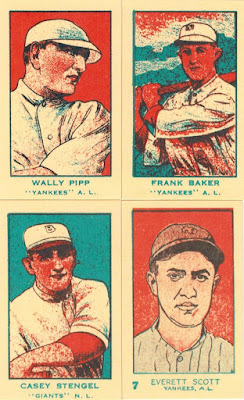 Jon's been particularly generous with his free card coffers as of late -- I generally try to keep my claims to two or three cards, but this time I couldn't resist.

I actually own a couple real versions of these strange 1910s-20s strip cards, but I'd never seen them as reprints before, so of course these needed to come with me when Jon offered 'em up. 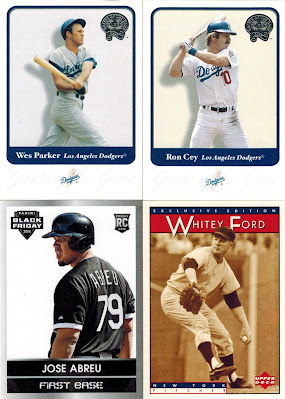 Okay, so maybe I'm a bit of a hypocrite, because yes, that's a total of nine cards I've requested from Jon over the last couple months.
(RIP, Whitey.) 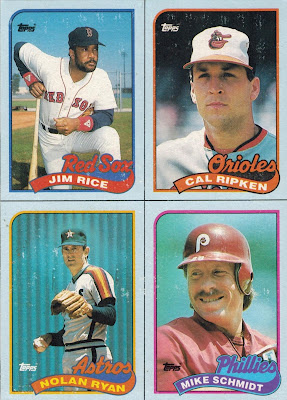 Kerry over at "Cards on Cards" also presented a few particularly scintillating Free Card Friday lots recently -- notably one that featured an entire box bottom!
These have, of course, since been sliced up and distributed into my binders -- I enjoy individual cards way more than oversized display pieces -- but here's proof they were once together as one. 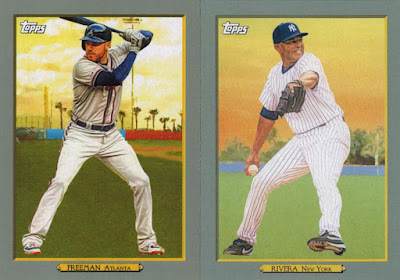 I also claimed a couple of this year's Turkey Reds from Kerry's festivities, and I'm glad to have any I can get because they're probably my favorite inserts of 2020. 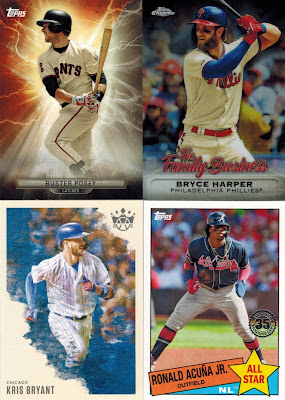 Again the hypocrisy: here's another healthy batch of cards I claimed from Kerry that certainly surpasses the two- or three-card limit I tell myself I'm gonna follow.
I mainly wanted that Posey because I had no idea what it was -- turns out it's part of some Walmart-exclusive insert set from a few years ago that I've never seen before and might never see again. 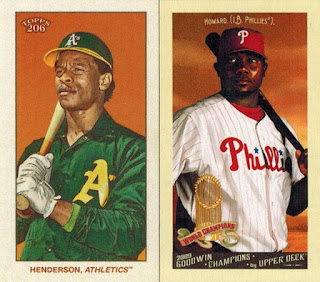 These two came via a more recent Free Card Friday offering from Kerry.
That Henderson is my first look at the 2020 Topps 206s, and while I don't necessarily think that's a brand that needed to be revived, I admit they're kinda cool. 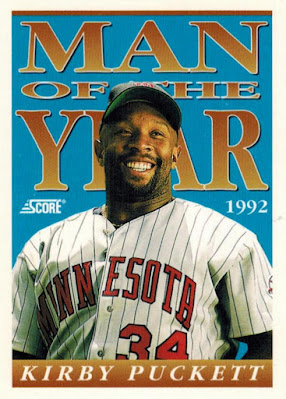 Here's one time where I was able to quell my urges -- I managed to limit my Free Card claims to a single suspect in a recent giveaway from Kevin over at "The Diamond King."
This terrific overproduction-era Kirby Puckett somehow managed to escape me all these years -- I'm certainly glad to have this one, but part of me can't help but wonder how many other easy commons are still flying under my radar. 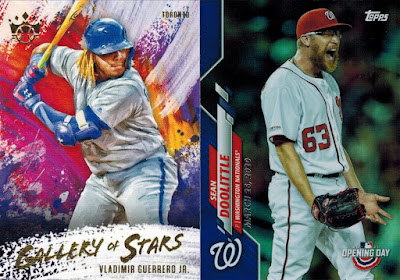 These two colorful additions to a couple of my newer player collections came my way from a Free Card event hosted by Rob over at "Padrographs."
Good luck finding a free Vlad Jr. card anywhere else besides the blogs. 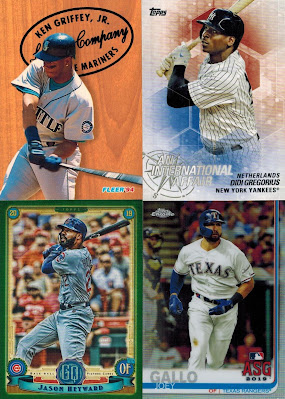 Closing out the barrage of recent giveaways around the blogs are the spoils from a few different Free Card events sponsored by Brian of the "Highly Subjective and Completely Arbitrary" blog.
All of these hit various player collections of mine, but I'm particularly fond of the Griffey because it gets me missing '90s inserts all over again. 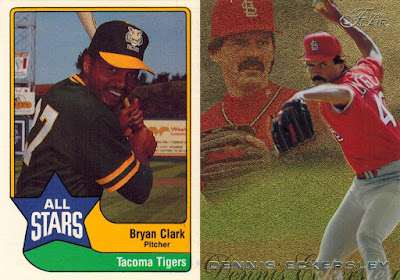 Eck was another Free Card Friday claim, and a reminder that I've never quite gotten used to seeing him with the Cardinals.
The Clark was a surprise throw-in from Brian and a great oddball add to my Pitchers at the Plate mini-collection that I easily could've gone another 25 years without knowing about. 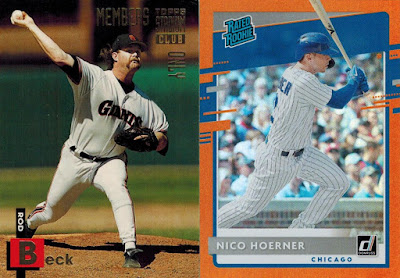 Shooter was another Free Card claim -- you can't throw free Rod Beck cards out there and expect me not to pounce! -- while the shiny Hoerner was yet another spot-on throw-in from Brian. 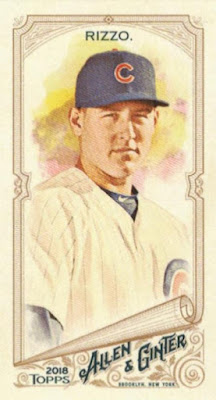 And the Free Card Friday marathon ends with this excellent A&G mini for one of my very favorite player collections.
Free baseball cards are one of the supreme pleasures in this world, and while my strange brain insists on that weird side-effect of guilt, I don't think you can blame me for jumping on free cards when the free cards are this great.
Posted by Nick at 5:45 PM

a lot of great cards there.

Nice thing you bloggers have got going,I'm sure everyone's happy giving the same as getting...and Wes Parker with the mighty swing for the win!

That 89T box bottom is awesome. Love the Rickey T206 too.

I feel a little guilty too when I claim these greats for free.

That Kingman is a nice looking card.

That's an impressive group on that box bottom! Usually there's at least one odd-man out on those, but not that one.

It was quite a summer here on the blogosphere. Just when I thought those FSF giveaways had died out, a couple bloggers brought 'em back.

The Buster Posey is fantastic! Of all the cool cards in this post that one grabbed my attention right away.

Free is my favorite flavor.

Don't feel guilty when you claim stuff from me! Great stuff all around, by the way.