We can be Heroes 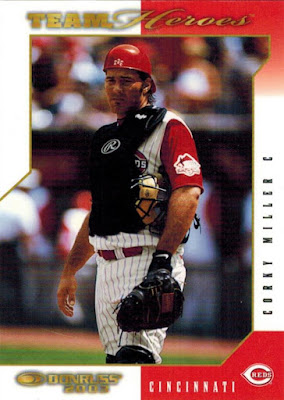 It seems I've come to a point in my collecting life where my nostalgia is starting to get displaced.

I realized this when Kerry of "Cards on Cards" (and a longtime friend of the blog) mentioned he'd come into a large lot of 2003 & 2004 Donruss Team Heroes singles. My dreaded I MUST HAVE THESE lights turned on, and I commented saying as such. They were on my doorstep not long after, a box of at least a couple hundred(!) cards from the short-lived brand (Team Heroes, along with Donruss as a whole, called it quits after 2005).

I like Team Heroes for a lot of reasons, but two main ones: 1) it's about as close as Donruss ever got to a Topps Total-like set (I mean, Corky Miller's in the checklist!), and 2) I seriously never find these ANYWHERE. It's one of the sets I'm talking about in my theory that cards from the early/mid-2000s just plain fell off the face of the earth at some shady midnight in my adolescence.

But my first thought on seeing (and wanting) them on Kerry's blog was more nostalgic, something like: Oh, I used to love these back way back when! 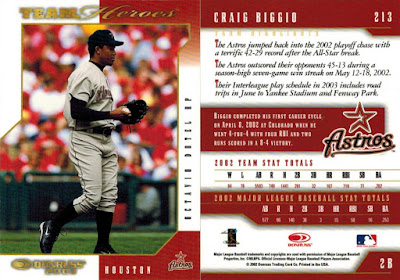 But then I really started to think about it, and I realized that I don't think I actually opened any Team Heroes when they were actually on store shelves.

Somewhere down the line, it seems I got so frustrated about the lack of Team Heroes in my collection that it tried to convince me I did actually open these when I was 11-12 years old, that I didn't let them just go by unnoticed at the time. 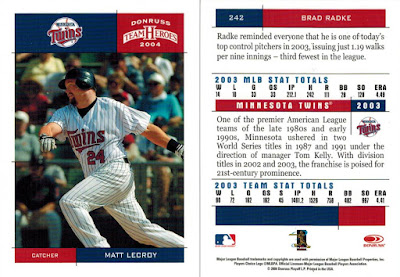 In the end, the box Kerry sent was more than enough to make up for the gap in my collection (and mind) previously left by Team Heroes.

Aside from featuring a whole lot of Obscure Dudes I collect (Matt LeCroy!), I'd also like to take a moment and reflect on how wonderfully detailed the backs are -- how many sets give you player and team bios on the same card? 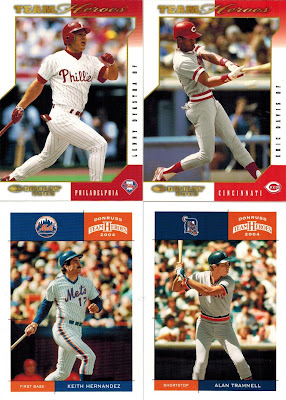 Unlike Topps Total, there are a few legends sprinkled into the checklist -- but true to form, they're far from the Ruths and Aarons and Boggses you see shoved into every set nowadays (the world needs more Eric Davis and Keith Hernandez cards).

I can talk on and on about Team Heroes, and the nuts and bolts of it -- but since I don't think that truly sums up my enjoyment for this short-lived brand, I decided to undertake the tough task of pinning down my ten favorite cards from the massive box Kerry sent over, just to show all the little joys and minutiae that make it so great. 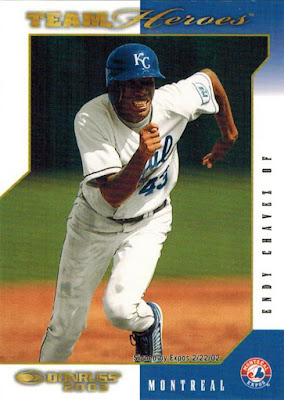 I collect Endy Chavez, and while I don't know if he can be classified as "obscure" given his famous catch in the 2006 playoffs, his brief stint with the Royals (29 games) sure is.

What makes this one doubly weird is that Chavez had last played with the Royals in 2001, and yet here he is depicted with them on a card released two years later. 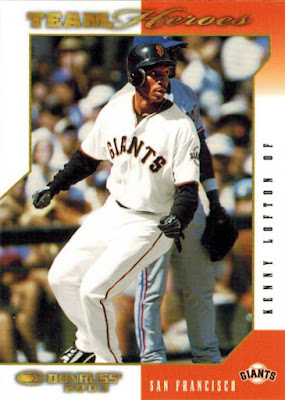 I get excited over any new Kenny Lofton card, but I'm particularly fond of any that feature the seemingly infinite Short Term Stops from the later stages of his career. 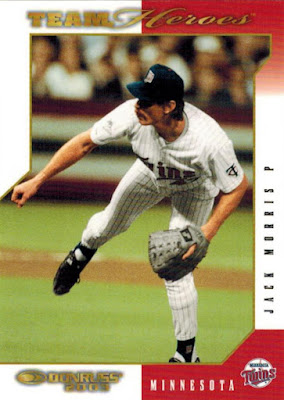 Jack Morris's 1991 season with the Twins was so legendary that people (including myself) sometimes forget that it was his only one with the franchise. 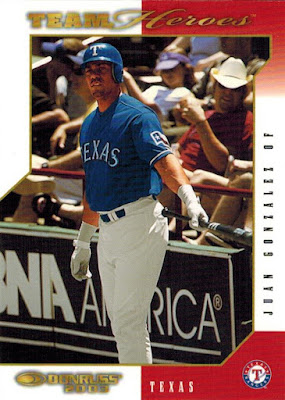 Because of the guy in the cowboy hat in the background. 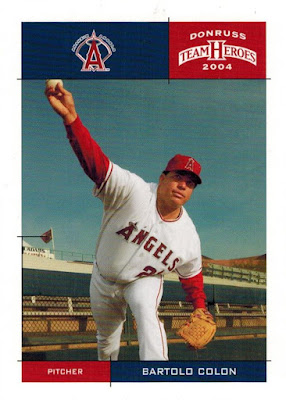 The man, the myth, the legend. 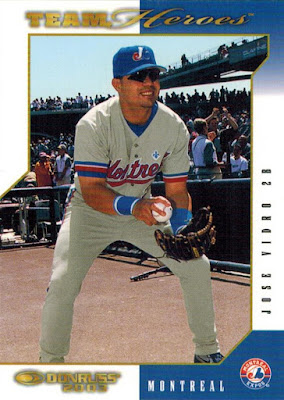 This, I think, is when posed shots work best: afternoon sunshine, fans in the stands, obviously taken not long before the start of an actual game. 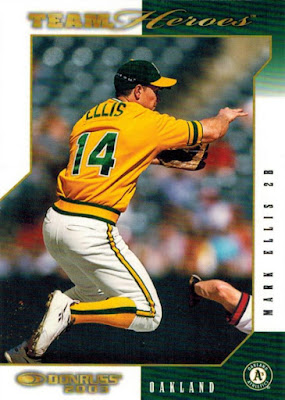 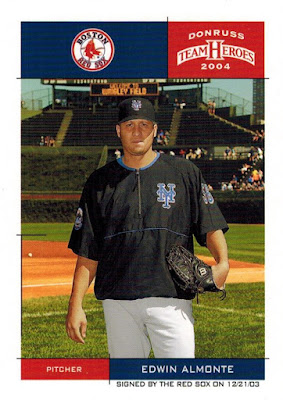 I have no idea who Edwin Almonte is -- 2003 was his only big-league season (12 games total) and he never actually played for the Red Sox -- but wow is this a terrific baseball card.

Like Team Heroes as a whole, it kinda brought up that nostalgia again: I can't think of many cards that show the batter's eye like it used to be at Wrigley, all shrubbery and green, back before it became yet another "premium seating" area (aka seats for rich people who don't actually like baseball). 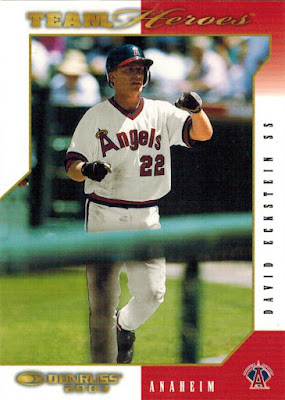 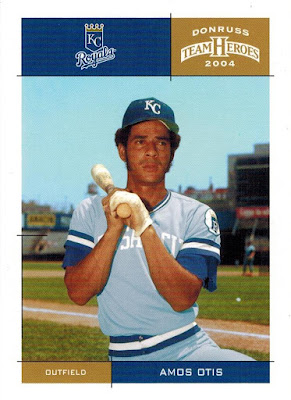 But still: there have been cards of Eric Davis in recent years. There have been cards of Jack Morris. Best I can find, however, this is the last regular ol' base card ever issued of Amos Otis...and it came out fifteen years ago. Fifteen years! Amos Otis may not be a household name (though he's up there in the Great Baseball Names category), but that's still a helluva drought for someone who had a long and fairly distinguished career right smack dab in the middle of the '70s.

If nothing else, Team Heroes was there to give poor Amos Otis his moment in the sun -- you might even say it's downright Heroic.
Posted by Nick at 5:30 PM

I don't remember these at all!..any set with Amos Otis is cool with me!

I never heard of them ,looks like a very nice set.I am headed to E-Bay to see if I can find some.

These are very cool cards, I noticed the Otis when I was writing my Royals All-Time Team post but hadn't realized it was his most recent card!

"I can't think of many cards that show the batter's eye like it used to be at Wrigley, all shrubbery and green" There's at least one other such card in that set - Jason Anderson, another obscure Mets pitcher.

I think I opened some packs of 2003 Team Heroes; liked the checklist, didn't like the design. I don't remember the 2004 set at all.

that mark ellis card is great!

Re: Amos Otis. Notable '70s players like this have fallen victim to the licensing rules. Topps can pay for the likeness licenses of only so many former players and I'm sure a bunch of that money is socked into Hall of Famers. That leaves little for the players I adored like Otis and Garry Maddox and Bake McBride and Ellis Valentine and I could go on.

You got a want list on the 2004 Team Heroes. I have a couple hundred I don't need.

I'm pretty sure I have some 2003 A's sitting in my collection, but don't think I've ever seen the 2004 design. I actually really like the simplicity of the design.