Perks of the job 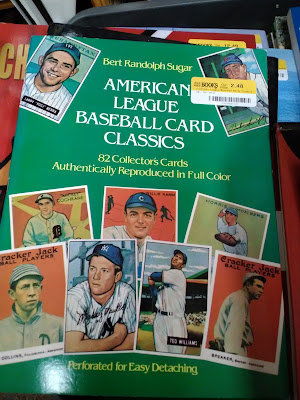 I've been at my new Half Price Books job for about three months now, and I'm happy to report it's going swimmingly.

My coworkers are cool, it's full time work, and it's just generally easier on the mind than the other bookstore gigs I've had in the past. It's also my first time working with used books, which I enjoy way more than my past corporate-ish bookstores because man does it get tiring seeing the same bestsellers over and over again. I'm also running the sports section at work now, which is both good and bad because my paychecks don't really get along with all the baseball books I want.

As nice as the job is, I didn't really expect it to have any impact on my baseball card collection. But right around when I started running the sports section, I walked into work one day and found this book of Dover Reprints on my shelf(!). I have quite a few Dover Reprints but I never knew why they were called that or how they were made: turns out they were issued by Dover Publishing and distributed in these big booklets.

Not surprisingly, I bought the book of Dovers on my break that day, and had all them torn out and separated that night (so quickly that I didn't even think to scan them). 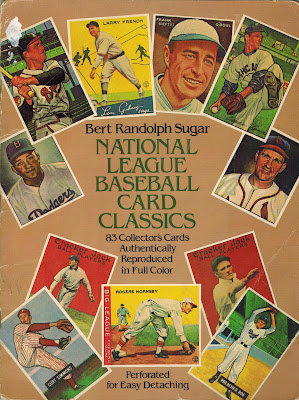 Half Price Books is a nationwide chain, which means that pretty much anything from any other store can be transferred to the one I work at.

But despite my excitement over that initial find, it didn't hit me until way later to see if any other HPBs had these Dover Reprints in stock. 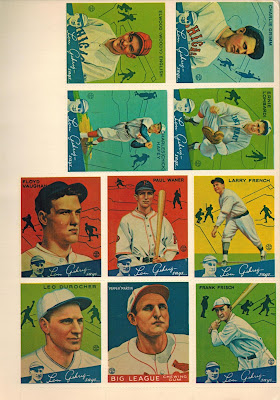 They did -- and a fair slice of my paycheck that week went towards adding them to my collection, because man are these things cool. 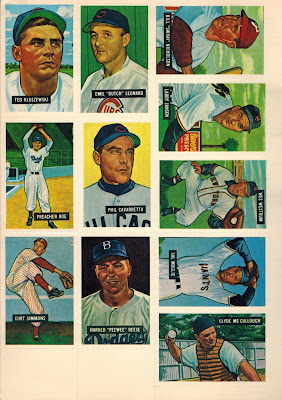 Along with sweet Goudey reprints, I also like that Dover featured cards (and players) you don't often see reprinted (Sal Maglie! Preacher Roe!). 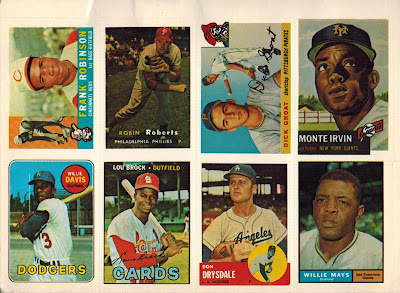 From what I can tell, these Dover booklets were printed in the late '70s, which means reprints like these were almost modern when they first came out. 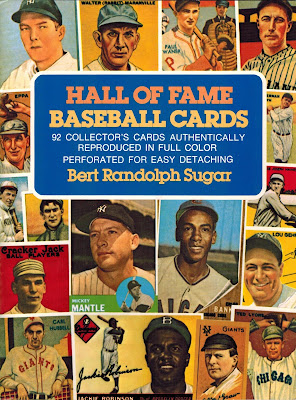 Now that the AL and NL are taken care of, how about a whole book of old-time Hall of Fame reprints? 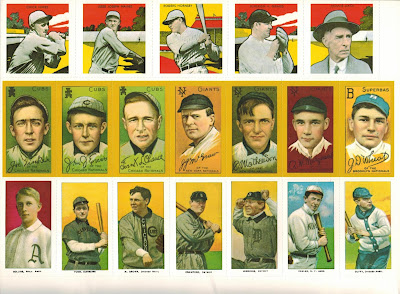 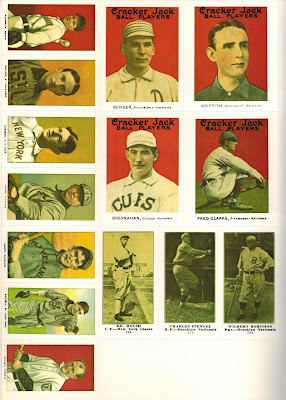 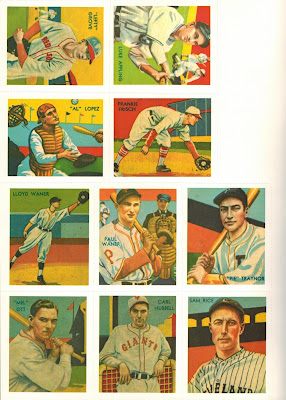 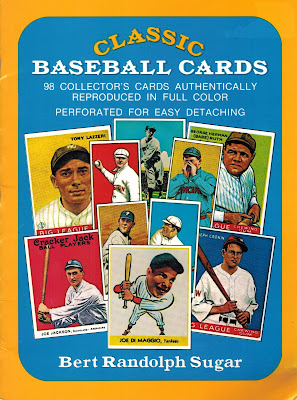 All told, the new job added a whopping four Dover Reprint books to my collection -- with my employee discount it worked out to about half the cost of a blaster all together(!). 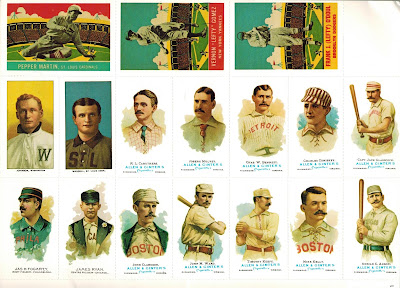 This final "Classic Baseball Cards" booklet might've been my favorite of the lot, if for no other reason than the stunning array of oddball vintage it featured. 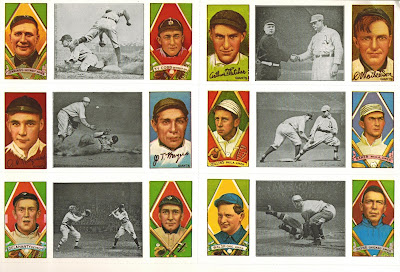 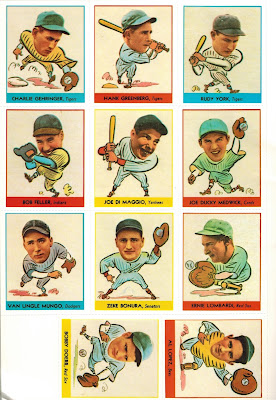 All in all, these are excellent examples of why I enjoy reprints so much: they allow me an affordable, secondhand joy of collecting cards I'll probably never actually own in this lifetime. 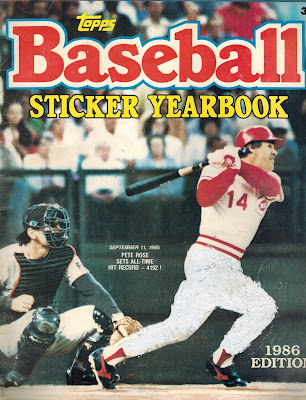 In a sense, I understand why the Dover Reprints fell into my lap -- they are books, after all, they just happen to be books with baseball cards in them.

But even after only three months on the job, I have to say I've been completely unprepared for the other ways cards have popped up thus far. The vast majority of HPB's inventory comes from what people bring in to sell us -- part of my job is buying these books and deciding what goes on our shelf. It parallels the ways we collectors often have to explain cards to non-collectors: no, your '80s bestsellers aren't worth anything...no, just because you have a lot of them doesn't mean we'll give you more money...etc.

Still, every once in a while a surprise lurks behind the James Patterson hardcovers, like the '86 Topps Stickers album someone brought in a while back... 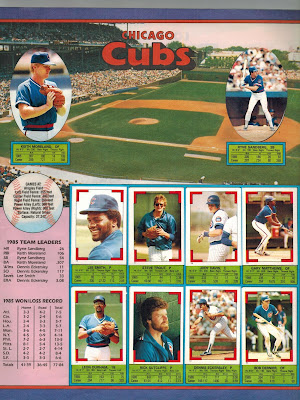 ...made even better by the fact that the previous owner had completed and inserted the complete set inside! 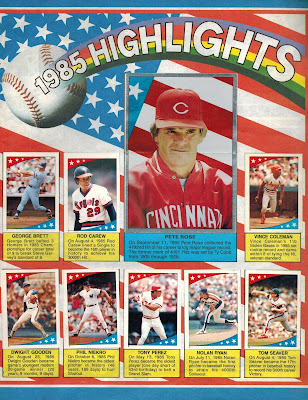 Stickers have never personally been my thing -- I don't have the patience or aspiration -- but I'll admit it's pretty darn beautiful seeing a whole set meticulously peeled and stickered like this. 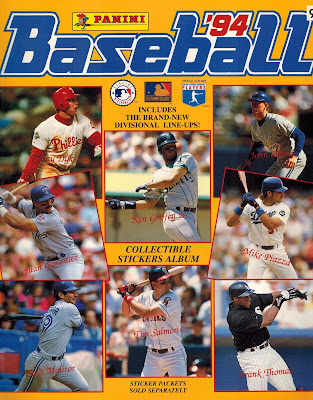 That same person also had a '94 Panini Stickers album in with her stuff, though this one didn't appear to captivate the previous owner as much -- there were maybe a dozen stickers in the whole thing, at most. 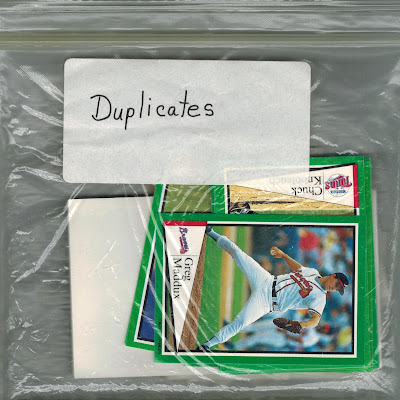 And hey, a Ziploc bag of duplicates came with the lot -- I treat these like everyday baseball cards, so into the binders they'll go. 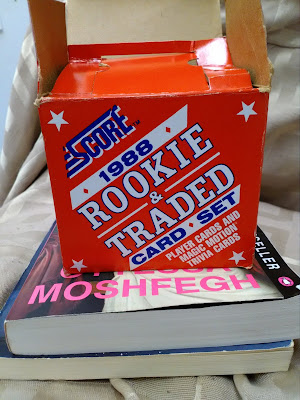 It's gotten to the point now where most of my coworkers know I like baseball, and collect the cards to go with it.

That explains why I came to work after a couple days off over Christmas to find this '88 Score Traded box set in the break room with my name on it -- I don't yet have the specifics of how we ended up with it but I'm guessing it (somehow) came in with someone's unwanted books. 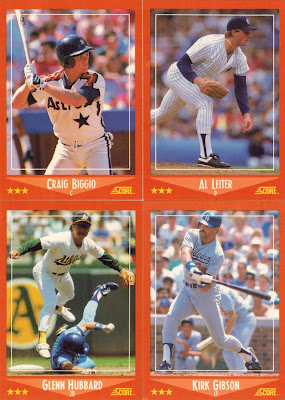 And yup, I double-checked it on my break that day: the set was indeed complete!

It's still my favorite Score design, and the traded set packs quite a punch -- bunch of good rookies and other tchotckes I somehow still needed. 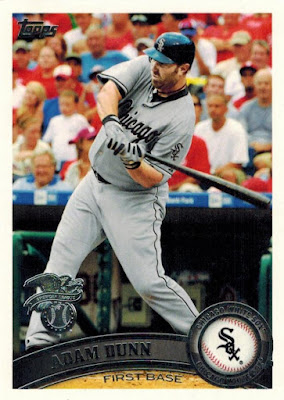 Sometimes people just abandon their stuff with us: as was the case with a woman who walked in one night with a box of stuff, threw it on our counter, and left.

I don't normally like when this happens, but I couldn't be too cranky this time since there were baseball cards in there among the water-damaged books and scratched video games I'm guessing once belonged to her child. With random baseball card encounters like this one, I don't even really care if there's anything I need -- just the fact that I'm sifting through baseball cards, any baseball cards, at work is heavenly for me. But there were actually a few binder-worthy items in the end, like this AL Team Set exclusive Adam Dunn that somehow ended up in a stack of '87 Topps and '90 Donruss commons.

I've found baseball cards in a lot of weird places over the years, and I guess you can add bookstores to that list now -- so here's hoping I find a '54 Hank Aaron stashed inside someone's old book collection one of these days.
Posted by Nick at 5:18 PM

Sounds like a lot of fun to work at a place like that! That Hall-of-Fame Dover book and the '86 Topps stickerbook were two of the very first baseball books I ever had. I learned a ton about baseball from those two. Great memories.

The Dover reprints are simply fantastic.
I need a job like yours. :)

Baseball cards on the job...place was meant for ya!

Cool stuff. And man I loved sticker books as a kid.

I'm not much for reprints. They're OK if I really like the old set (Cracker Jack) or it's a high number I'll never get ('52 Topps), but otherwise *shrug*

You're in the right place for finding a stray card stuck in a book. I'll bet you find them a time or two.

Now, just go find that T206 Honus that's been in the book for a hundred years. It is possible....

You're not going to find great stuff like this at a big box retailer. It's neat that these books and cards come through your store and that you've become know for collecting enough that these discarded gems go right to you.

Personal note to self. When I retire from the classroom, I need to get a job at a used book store. Those are some really cool hidden treasures you picked up. The Bert Randolph Sugar books are pretty awesome. But the completed sticker albums are the thing I'm most jealous of.

Awesome. One of my dream jobs is to work at a book store, although I’m sure I’d get distracted with all the reading!

Hey Nick! I'm getting caught up on my fave blogs. Man, you are working in my all-time fave book store! When I lived in Dallas, the HOME store was my favorite hangout. I could always find out of print baseball books there plus great additions to my bios, memoirs and history collections. The restrooms were clean. This HPB has a nice coffee and sandwich shop too. Can't say how many times I was there from open to close. And the clearance sales?? Oh my word. I'm a little jealous ;) but also so happy for you. What a great environment to be in!