Why I'm here after 20 years 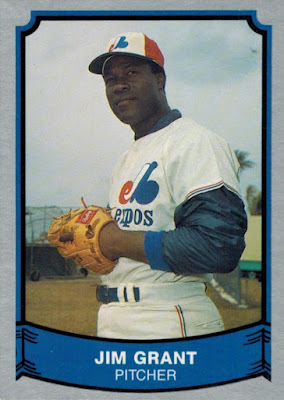 It occurred to me recently that 2019 marks my 20th year of collecting.

It's somewhat of an unofficial anniversary: I'm not 100 percent sure when I got my first cards, but I generally place it around the time I was seven years old (1999). I've been collecting for so long that I literally can't imagine my life without it. And unlike many others, I've collected in some way, shape, or form the whole time without any breaks -- I hoarded cards straight through high school and college.

I'm constantly trying to connect the cardboard dots from my youth to now. Which is why it's surprising that, in a roundabout way, I only realized it was my 20th anniversary thanks to a few coincidental Pacific Legends sightings around the 'net lately (notably on Night Owl's most recent post). I credit the somewhat forgotten Pacific Legends sets with keeping me in the game for 20 years: the cards contained names from throughout the long history of baseball and were some of the most readily available legend-based singles in my youth.

I think they also might've fueled my later love for guys in weird uniforms: Pacific Legends includes quite a few odd (but great!) photo choices, like this one of Jim "Mudcat" Grant's brief stint as a Montreal Expo (11 games in 1969). 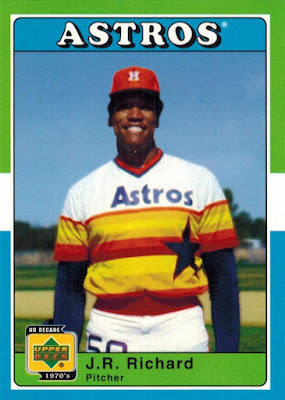 So that got me wondering: what other sets have kept me here all this time?

This isn't necessarily a discussion of my favorite sets: stuff like '65 Topps, Kellogg's cards, and really anything from Stadium Club (etc.) remain among my biggest thrills to collect, but I can't really say that they were the most influential chapters of my card life. The one-off 2001 Upper Deck Decade, however, was. The premier card shop of my youth used to have a big box of single packs for a dollar, and I just about bought out their inventory of them as a kid because I loved the cards so much.

But it wasn't only about the cards themselves: I grew up listening to my dad's stories about collecting and baseball in the '70s, and UD Decade provided me with a chance to both collect and see those stories personified -- the afros, the Technicolor jerseys, all of it. 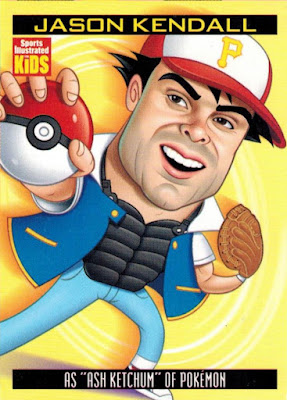 I recently talked about the role SI for Kids cards played in my early collecting years -- I'm not exaggerating when I say that these were more influential to me than anything Topps, Upper Deck, or anyone else put out when I was eight years old.

I started collecting right when the whole jersey/autograph bonanza really started to take off, and it only got bigger and bigger throughout my grammar- and high-school years. Though I did eventually get sucked into the memorabilia market for a bit as I got older (sigh), SI for Kids was a good early indicator that cards could still appeal to kids like me in spite of whatever the big card corporations were churning out, or whatever Beckett and the rest of the cardboard mafia was spitting out.

I mean, where else was I gonna get a card of Jason Kendall as Ash Ketchum? 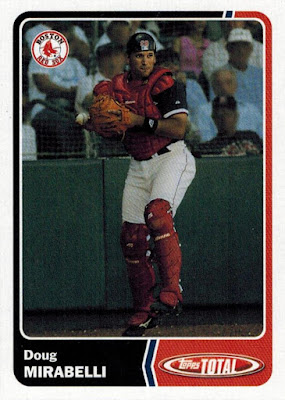 Part of the reason I was so pissed to hear about this year's disastrous Topps Total revival was the fact that I vividly remember Total as it existed in its heyday.

I knew early on that I wanted to explore the unsearched rooms and obscure corners of the baseball world -- I wanted to collect the Doug Mirabellis of the baseball universe. Topps Total gave me a chance to do that at a price I could actually afford (99 cents a pack!). I didn't know or collect all the names Total offered (probably a small percentage, actually) but just knowing that the middle relievers and backup catchers so often passed over in favor of the mega-millionaire stars were getting their due was, both in the literal and symbolic, important.

Given that a 10-card pack of 2019 Topps Total costs $10 and is only available online, there's no chance the ten-year-old version of myself would be buying it, which is why the revival is a crime and a failure. 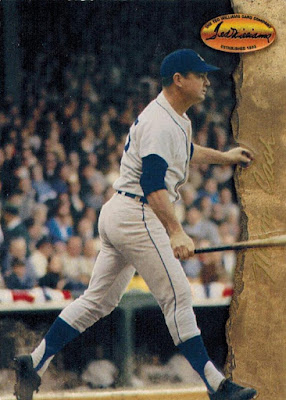 Like Pacific Legends and UD Decade, it's odd how big of a role a select few obscure and forgotten sets played in my youth.

My dad used to take regular trips to Memphis when I was a kid, and he always used to stop at a huge card shop down there that had packs all over the place. I can't say I remember all the stuff he brought back for me, but I can say that I looked forward to the Ted Williams cards the most. The brand only lasted two years (and I'm not sure how big of a part Ted Williams played in their production, if any), but it was the second of those two sets that will forever be enmeshed in my memory.

When I see anything from the 1994 Ted Williams checklist -- and especially this Norm Cash card in particular, for some reason -- a wormhole opens up, and I'm back on my living room floor, my parents watching as I fan a stack of baseball cards out in front of me. 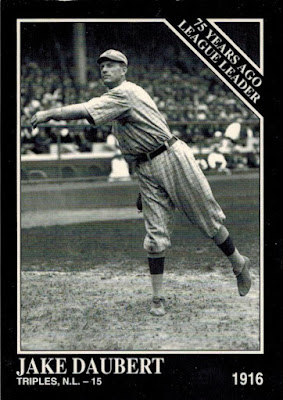 But if I had to pick one set that cultivated my lifelong love affair with collecting more than any other, it's gotta be Conlon Collection.

Unlike the others on this list, Conlons weren't on my radar as a kid. I only bought them after I returned to baseball cards (after an odd year-long foray into hockey cards) right around my freshman year of high school. I heard about the set somewhere, thought Oh, old guys, cool!, and bought a 36-pack box for something like $20 shipped because the overproduction era was crazy, man. I didn't know it at the time, but this set, and that box, was responsible for the knowledge that I'd be collecting baseball cards for the rest of my life.

I sometimes wonder what I enjoy more: baseball or its history. As far as history goes, you won't find a better set than this. Conlon has everything. HOFers and the obscure -- including a slew of guys who never received an actual baseball card during their career. The historic moments and the forgotten minutiae -- like the cursed year (1916) the Dodgers decided to wear checkered jerseys, for some reason. It's all there. I've read many books on the deadball era, but Charles Conlon and his photography brought the game and its players to life for me.

That, I think, is why I'm still here after 20 years: baseball cards keep me that much more connected to the game I love, the game as it existed a year or a decade or a century before I was around to see it.
Posted by Nick at 6:19 PM

Man, I wish I would have found Conlon during my first time through the hobby, too. Good post!

Those sets bring back memories for me of watching you discover them!..I'm so glad the hockey thing didnt stick,I was (and am) clueless about hockey,haha!

My 20th anniversary of collecting came in 1995 and I didn't collect for a long time after that. So by my calculation, you're about to take a break from the hobby until 2030.

The Conlon Collection, what sweet memories. Great photography, great info on those players from before our time. I remember going to our local shop and first seeing them and buying a pack. I was hooked, bought a box, then a box with each year’s release. Just last year I finished up the “colorized” inserts. Was lucky to get some of the regular issue cards signed when I restarted my autograph collection in 1994, by the way the autograph collection continues tp grow daily. Thanks for mentioning the Conlons, for a treat I may pull out the binders and take a memory trip.

My 20th anniversary came in 2001... which happened to be the year that I sold off the bulk of my collection. Although I took a few years off here and there... my 40th anniversary is just around the corner in 2021. Damn. I feel so old.

Such a great post today! I wish that I would've gotten into the Conlon and Ted Williams sets earlier, who knows, maybe they would've helped to prevent my 10-year hiatus from card collecting.

Great post!! I enjoy many of those same sets. More so now that I can nearly get them for pennies..
Congratulations on 20 years. I’m on 42 years now!!
And I love the history even more than the game in all of my cases collecting!

That Upper Deck set came out during my regular collecting hiatus. I have since come across some of the cards at the vintage shop/hoarder's den near me. My only dislike is the apostrophe in "1970's".