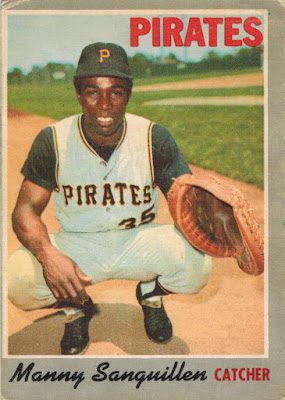 I might as well give the plot line away right now: this post is the story of how I got a box of 1970 OPC for the price of a blaster.

A while back, I received an email from a blog reader named Wes W. (no, not that Wes) who's been insanely generous with me in the past. Apparently he stumbled upon a large lot of '70s cards at an estate sale in his neck of the woods.

Only later did he check the backs... 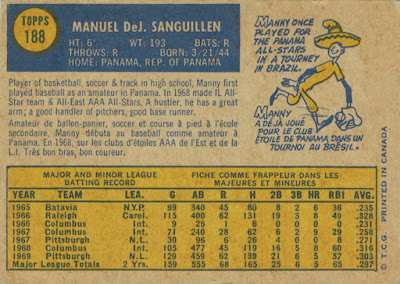 ...and discover that he'd just purchased a lot of several hundred 1970 OPCs!

For whatever reason, Wes thought of me (sometimes it helps to be "The Guy Who Collects Weird Stuff" around the blogs) and offered me everything he didn't need for $20, mainly to cover the price of shipping. Hmm, a blaster of Gypsy Queen or a box of vintage OPC? 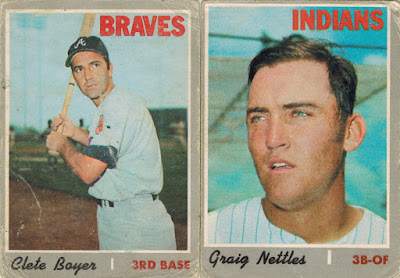 A few short days later, the box was on my doorstep -- and whoa was it a lot of fun to go through.

I've said this many times before, but it bears repeating: I LOVE OPC. But ones of the vintage variety aren't always easy to come across. I think I owned a whopping three 1970 OPCs before this -- I ended up keeping at least ten or twenty times that from Wes's find alone.

And when I profit, the rest of you do as well: some of my recent trade buddies might've noticed a few OPCs in packages I've sent out lately, and yes, this is where those came from. 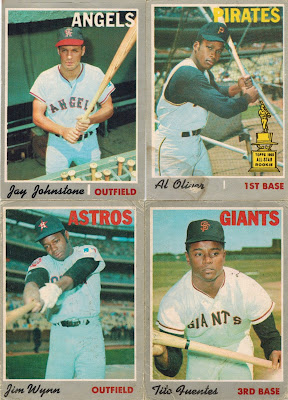 At this point in my collecting life, I own most of the basic '70s Topps cards of dudes I collect -- I really only need a handful of bigger names and/or high numbers now.

But coming into this box these allowed me to relive the joy of getting those vintage commons I've had for years all over again, only this time in OPC form. 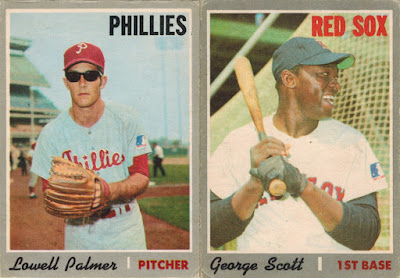 A couple of the set's more memorable cards of the OPC variety. 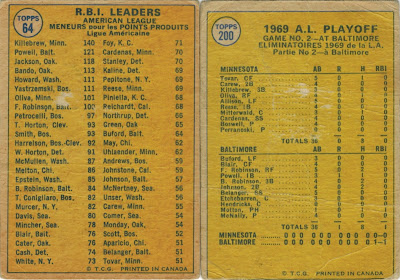 Even the "inserts" have French on the back!

(Also, I'm just now learning that the French word for "game" is partie, and I think that's awesome.) 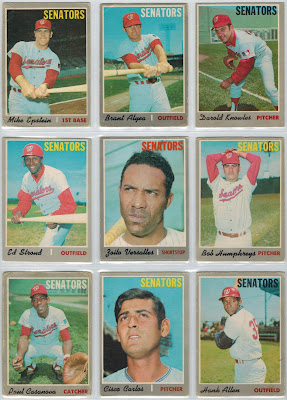 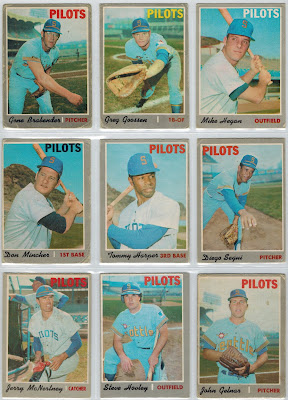 I didn't even put it together when Wes emailed me that this lot was likely to have a large amount of Pilots in there. I'm down to the last four or five cards in my once-laughable quest of owning all the 1969-70 Topps Pilots. But never once did I think to go after the OPCs.

These brought my Pilots collection up to 129 different cards, which I think is a good number for a franchise that lasted all of a single season. 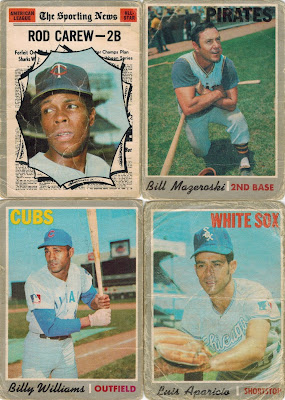 Ah, but there were some HOFers in this OPC blaster too, lest you think it was all commons and fan favorites. 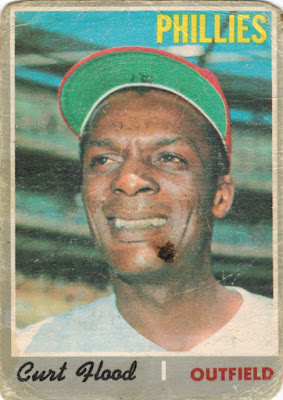 And let's not forget the OPC version of the most historic zero-year card ever made! 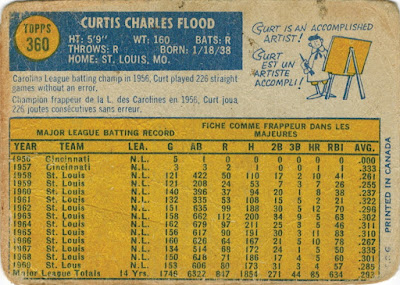 I have a hard time explaining why I love OPCs so much other than by saying: BECAUSE IT'S OPC!

They're the same as the standard Topps cards except they were made in Canada and have French on the back. Non-collectors might say "So what?" And they'd be partially right: it doesn't explain my enjoyment because I've never been to Canada and I have zero desire to learn French. But there's something about the lighter backs, that PRINTED IN CANADA copyright, and phrases like Curt est un artiste accompli! that make OPCs a rare goldmine of fun.

So, in short, if any of you stumble upon more '70s OPC at an estate sale this summer, well...you know where to find me.
Posted by Nick at 5:45 PM

So generous of you to send some of these my way in your last package. Thank you!
FYI, Lowell Palmer and Pat Neshek are like two peas in a pod.

Oh my, OPC. I'd love to stumble into a box of vintage OPC cards.

LMAO! I love reading posts like this because when I got older and realized that there were Topps card sets with so many more players, I was always upset that I only had OPC to buy.

It still amazes me to see some common player's card from an early 80s set and think how the set looks so familiar but that I've never seen that card before when I knew that I had a whole (OPC) set from that year.

Wow...just got off the phone with you..and you didnt mention this!!..very cool!!

Super awesome! I'd take a box of vintage OPC over any blaster out there.

It was really nice of that guy to think of you! And kudos to him on the find, a lot of collector's out there dream of these kinds of purchases, and here he goes and does it... and then shares it with someone else :)

The funny thing is that it wasn't that many years ago that I realized that a number of cards in my 1970 Topps collection were actually OPC's, and I got a bit annoyed that I didn't have as many Topps cards as I thought I had. Definitely worth $20, though.

Vintage IOC is always fun. I try to just get HOF players but I like the subtle differences

Very cool cards! Last year a book was published that documented the O-Pee-Chee story, but I think only hockey cards were covered. It still might be worth checking out, though.

What could have prevented the Legendary Wally Moon from making it into the first Frankenset?