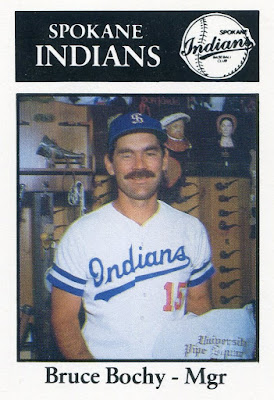 Some of you might remember my excitement over discovering a pair of mall-themed minor league sets last year.

As awesome as those finds were, however, they've left me with a feeling of unfinished business for the last nine months or so. That's because there were actually three Spokane Indians minor league sets released between 1987 and 1989, and I'd only been able to find the '87 and '88 in the moments following my discovery.

The '89 set eluded me at the time and began to fade into the back of my mind...until a couple weeks ago when I pulled out those infamous mall cards for another look and remembered the gap in my collection. I decided to check Ebay to see if the '89s happened to be up for grabs and, lo and behold, someone was selling one for a hair under $10 shipped. I bit, and a few days later, my mall set was officially complete.

The biggest name from the '89 Spokane Indians roster is, no doubt, manager Bruce Bochy, seen here posing in what appears to be a pipe shop decades before he'd go on to become a three-time World Champion skipper with the Giants. 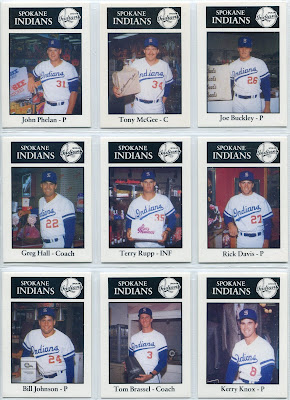 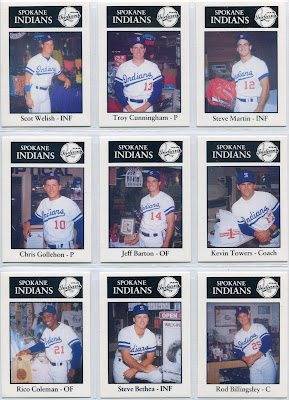 The rest of the set is as strange and glorious as the previous two editions: dimly-lit photographs of minor league ballplayers posing as consumers at Spokane's NorthTown Mall.

The types of shops seen here are numerous: everything from Kay-Bee Toys to an arcade center to a fashion outlet called Sheer Madness. It's about as '80s as '80s baseball cards can get. My local mall, in fact, used to have a great arcade stocked with a ton of great pinball machines, which served me well since I'm a self-labeled pinball nut.

These days, I'm no fan of malls, and I can pretty much trace the very moment I soured on them to the day that arcade was replaced by a Sbarro pizza joint (ick). 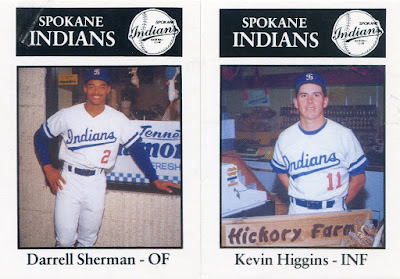 Unlike the previous two mall sets, I decided to do a little research to see which players (if any) from the '89 Indians roster wound up becoming big-leaguers this time around.

Besides Bochy, a grand total of three guys made it to the Show from this 26-card checklist. Both Darrell Sherman (37 games) and Kevin Higgins (71 games) made appearances with the 1993 San Diego Padres, the first and last time either of them would ever appear in the bigs.

Higgins is seen posing at Hickory Farms, an establishment which my dad informs me was a staple of malls across the land back in his day. 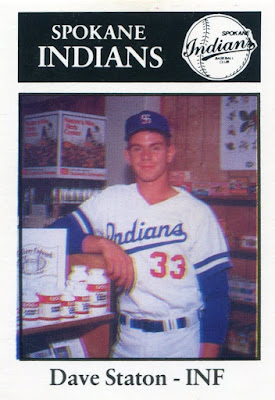 The only player to last multiple years in the majors was Dave Staton (pictured here flanking a shelf of pharmaceuticals), who appeared in 46 games in parts of the 1993-94 seasons with the Padres. 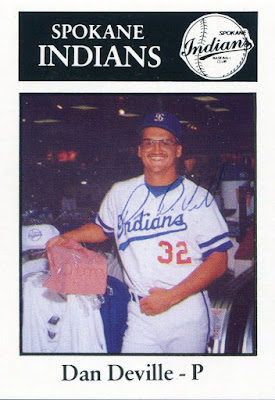 But other guys who never sniffed the big leagues still managed to have notable cards in this wonderful checklist.

The team set I purchased included a nice bonus with this autographed issue of Dan Deville, a pitcher who never made it above A-ball. 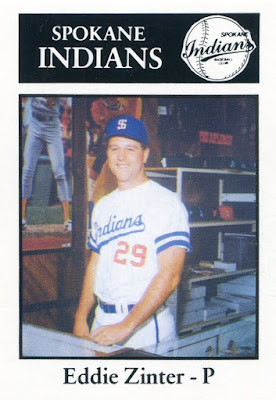 Eddie Zinter (who also never made it out of A-ball) has the most appropriate card in the set: a baseball player posing in a hobby shop.

You can see the glass display case and long white boxes that have comprised most of the real estate in literally every LCS I've ever walked into. 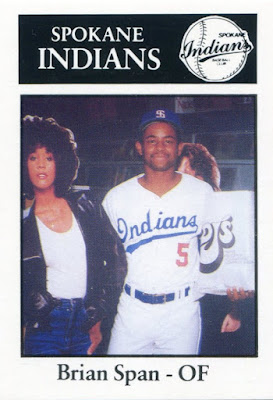 Cardboard Whitney makes a second appearance in the '89 checklist, this time with outfielder Brian Span, who also never advanced past A-ball and would be out of baseball by the end of the season. 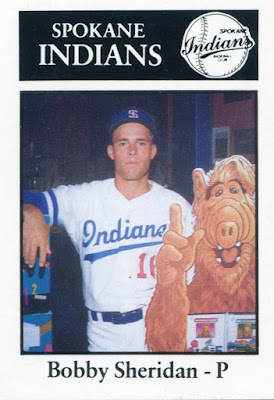 But here's what is easily my favorite card in this third and final mall set, and I think the reason is obvious.

As it happens, 1989 would be Bobby Sheridan's only season as a professional ballplayer and, as luck would have it, it was a season chronicled by a picture with none other than ALF. Many guys can play for years and years, achieve massive stardom and fame, yet never receive a card half as great as this one. Sheridan is a lucky man.

It gives me great honor and joy to say that my Spokane Indians mall set is now complete, and I think my collection has improved by leaps and bounds with the addition of what are easily the craziest minor league cards ever made.

Now: let's go to the mall, everybody!

great set! i love the background theme. Only one important shot missing - player at the Waldenbooks!

If Topps did an "at the mall" photo variation SP series... I'd be cool with it.

New item for bucket list: Take a photo inside a pipe shop

Hickory Farms is good. But if there are cards with evidence of a player standing in a Casual Corner, Cinnabon or Chess King, I am definitely finding a set.

Apparently our generation is blamed for killing the mall so no more mall cards :P.

Nice! So you now have a card with a dime box on it.

I love these!...my mall years were a bit earlier,but not much...

Miss me some Hickory Farms cheese spread. Those were the good old days. They also had these sausages that were pretty good too.