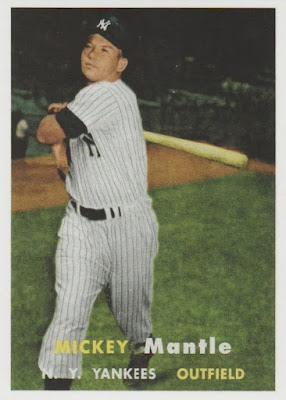 I think I've reached a point where I think of myself more as a reader who occasionally blogs, and less as a blogger who reads other blogs.
There's no doubt that I still love blogging, but over time, writing has become something I enjoy in sips rather than gulps. I look back at the early years of this blog and wonder how I was able to post once, twice, sometimes even three times(!) a day. That just isn't feasible for me anymore - if I blog once a week these days it's a success.
I certainly don't mind being more of a reader than a blogger - I've said many times that I respect the heck out that community of loyal readers who take the time to scroll through our stuff while fending off the urge to start a blog of their own. I think some fellow bloggers would also agree that readers also have the tendency to be the most generous people around - willing to send us stellar cards as thanks for whatever half-baked thoughts we might post.
One such reader is a collector named Dave S. who's been sending me heaps of cards like clockwork - the cards in this post span stuff I got from him a few months ago, up to a box I found on my doorstep just last night, in fact. 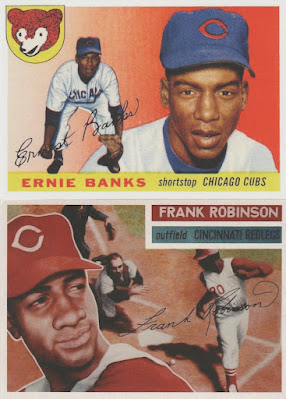 Dave's boxes are great, in that some of the stuff closely aligns with my specific collections/want lists, and a lot of it is just a mash of whatever he has lying around - that kind of mix is always a blast to sift through.
Case in point: these odd reprints, which look to have been knocked off in someone's basement - there's no copyright info or anything else on the back that suggest they're licensed copies. They're the kind of things I could see a less-experienced collector bringing into a pawn shop and being completely unprepared for the bad news.
The Frank Robinson is even more curious, given that it's a "Card That Never Was" as opposed to a straight reprint, and thus even cooler. 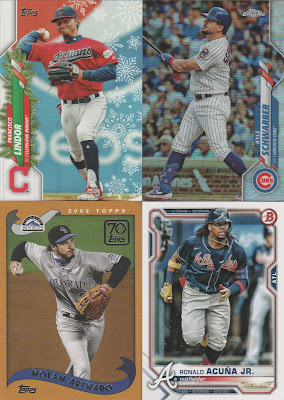 Here's a few more conventional items from Dave - cards from the last few years are especially appreciated since I've bought next to no retail lately. 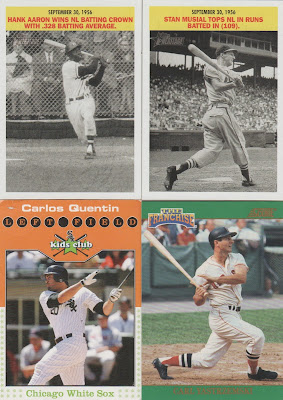 Sending inserts of big names like Aaron and Yaz are surefire hits for me, but I get just as excited over odd stuff like that Kids' Club Quentin because that's probably not a card you'll ever see again. 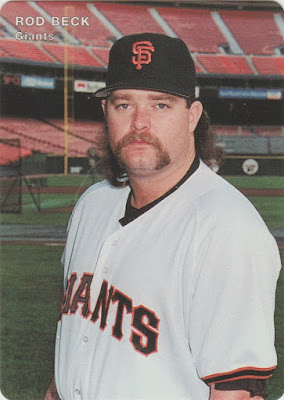 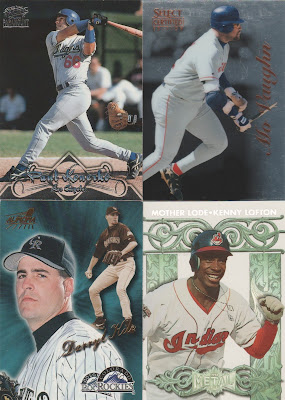 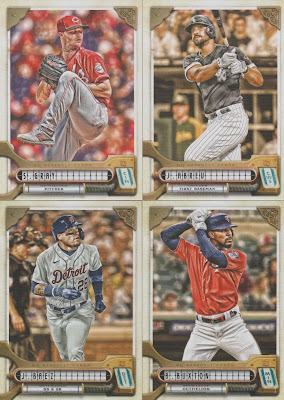 Aside from my usual Series 1 purchases, I think the only retail I've bought so far this year was a lone blaster of 2022 Gypsy Queen.
And judging from what I've read, I think I'm the only one who kinda sorta likes GQ this year - it's a whole lot more distinctive than a lot of the other designs they've thrown at us the last ten years. 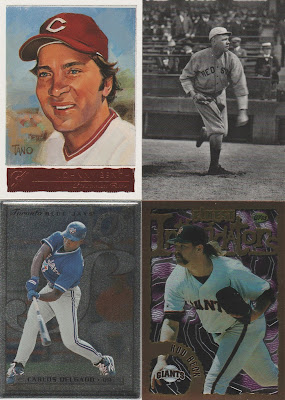 These are the kinds of scans I love to show on this blog - steel cards, Rod Becks, a neat Johnny Bench, and a Babe Ruth oddball I know nothing about. 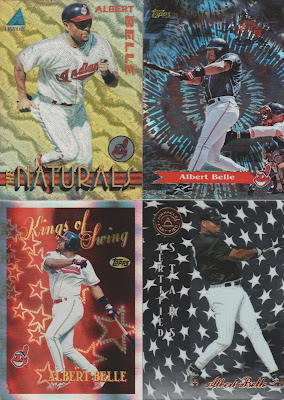 Dave must've come into an Albert Belle collection or something, because one of the boxes he sent contained a small treasure of don't-call-me Joeys.
While Belle is in my binders, he's not someone whose cards I actively pursue - but shiny stuff of anyone is always welcome around here! 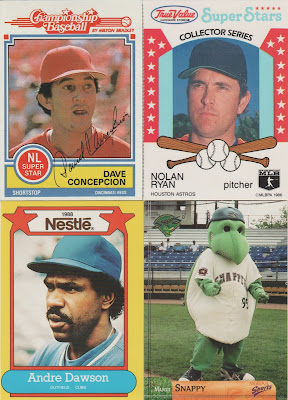 Oddball madness, including a minor league mascot card that kinda creeps me out for a reason I can't quite put my finger on. 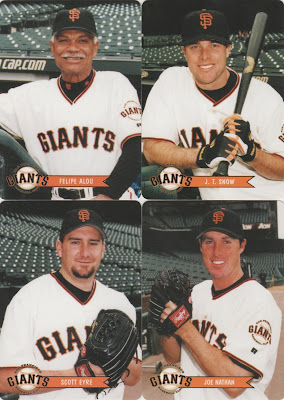 My eyes lit up when I saw a couple West Coast stadium giveaway sets in this particular box - these things are like Bigfoot here in the Midwest, and of course that makes them all the more desirable to me because the toddler in me always wants what I can't have.
Regional sets like this Keebler Giants one are often great for off-kilter stuff like managers (Felipe Alou!) and obscure middle-relievers I'm weirdly endeared to (Scott Eyre!). 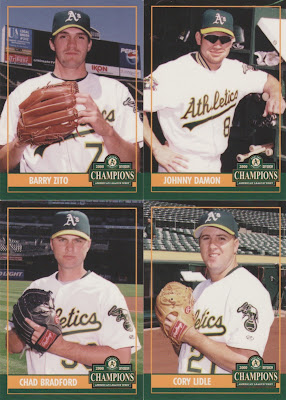 Somehow, this oddball set from Dave might be even better since it's from the heart of the Moneyball A's days - including short-term-stop Johnny Damon and perennial Dime Box favorite Chad Bradford. 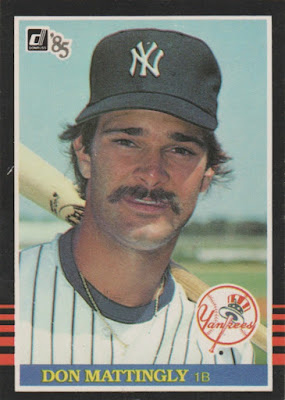 Dave also knocked out a Dime Box Dozen need with this '85 Donruss Mattingly - a card I still love despite the fact that it looks like Donnie Baseball got out of bed two seconds ago. 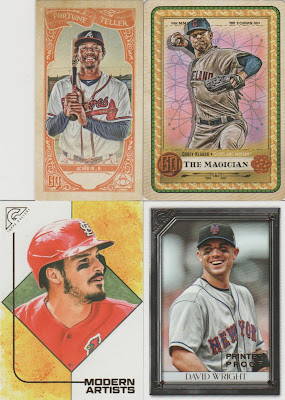 In a of great timing, Dave's latest box showed up just last night, and thus allowed me to squeeze another round of cardboard greats into this post.
I don't think I've ever bought a pack of Topps Gallery - and now that I think of it, I'm not sure I've ever seen one - but the cards aren't half bad. 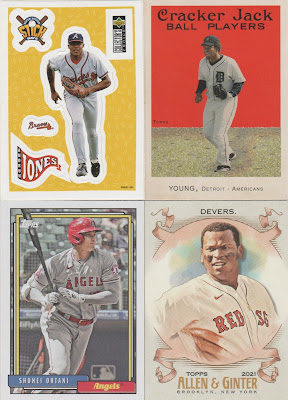 Random fun from the '90s to now - Topps doesn't need more brands, but I wouldn't mind them seeing them bring back Cracker Jack. 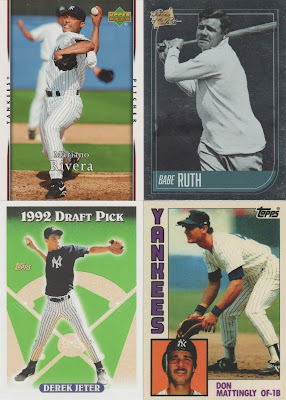 I'm by no means a Yankees fan, but they've obviously had a lot of greats over the years, which might explain why I'm on the verge of giving them a sixth binder in my collection - no other team has more than five.
The Jeter & Mattingly are a couple more of those mysterious reprints I mentioned earlier... 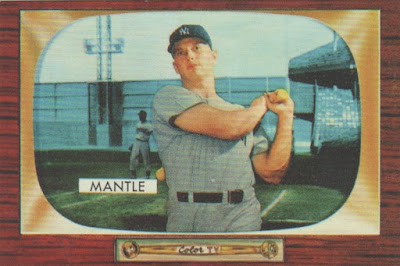 ...and since we started with a Mantle reprint, we might as well end with one.
Blogging has its rewards - both in the creative fulfillment it provides, and the selfish enjoyment of people sending me cards - but readers like Dave occupy their own special place in the blogosphere, one that has no doubt kept this blog running for as long as it has.
Posted by Nick at 6:29 PM

I've also become much more of a reader, and, on occasion, may find the energy to blog.

Considering I haven't posted in three months, I guess I've become more of a reader. I do have a post coming up, though.

Those are some cool cards. Love the ‘90’s/‘00’s inserts and shiny stuff. At first I thought the ‘57 Mantle and the reprints in the first 2 photos were real.

Fantastic stuff!... this is why I asked you at lunch today if you actually want all those random loose cards from my vendor gig.. you got a gazillion folks curating packages for you!

Unfortunately I have been going the same way. Not a lot of posts, but I do still read and occasionally comment. I'd prefer to blog more, but for whatever reason it hasn't happened.

Oh, and give Dave my address, I need some packages like that!

I went through that while I was in the hospital.. Partially because my cards weren't anywhere near me for a lot of it. But even now I'm having difficulty. Feeling my ideas aren't interesting, and as with everything lately, just feeling "What's the point?" I think that's hopelessness talking more than anything else though

The '85 Donruss Mattingly wins it, with the Nestle Andre Dawson runner-up.

1. Great Keeblers.
2. Blogging once per week is a completely respectable schedule.

Hey Nick,
Great post...it's been my pleasure to curate the boxes. I have never failed to receive as good, more often better, stuff as I send. It's a win/win in my book. I'm staring at at least 200-300 more in a box that will eventually make its way East...I'll let you come up for air...LOL.

Those reprints ARE bizarre, but interesting...just among the deluge of cards I keep finding at that consignment store...and at 25 cents American each...I'll take them all day long.

Keep up the good work amigo.

What's going on with that Hank Aaron card? Were the catcher and umpire airbrushed out? Or more likely, did Topps awkwardly insert a background behind him?

That Frank Robinson card is a fantastic custom.

I still spend more time reading than I do blogging - I'm quite content with my current 3x week posting schedule.

I think the reason Snappy is creepy is those lifeless cold black eyes...almost demonic in its own way...

Reading and commenting on blog posts is considerably easier than producing the blog posts, hence why there aren't more bloggers.

There's no way I could enjoy being a blogger; I keep saying I should post more on APTBNL and then it's 2 months later. Great cards from Dave!