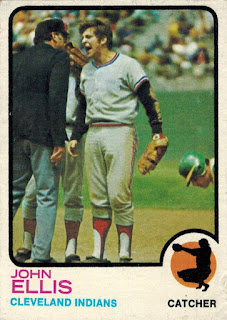 This is one of those posts I've been wanting to write for years, but didn't think anyone besides myself would be interested in...so here goes nothing.
You may already know that one of the endless corners of my collection is my treasured Dime Box Frankenset binder - filled with hand-picked cards numbered 1 to 666 that speak to me for one reason or another. The only real rule for entry is that the players on said cards cannot be "binder guys" of mine - ones I like/collect who are already featured in my standard team binders. Other than that, any mini-collection hit, any nifty photo, any otherwise cool card is fair game. It's found a use for literally thousands of cards I would've otherwise cast off, which is why I'm in full support of everyone starting some kind of frankenset.
Anyways, as much as I love the randomness of my Original Frankenset (we'll leave the second one for another day), I've always been interested to compile some stats on the cards in it, number-crunching baseball fan that I am. So, a few nights ago, I plugged all 666 cards into a sortable spreadsheet, revved up the statistical engines, and pored over the results.
There were some confirmations of long-held suspicions, some wacky surprises, and just a whole lot of fun for this nerdy card collector. 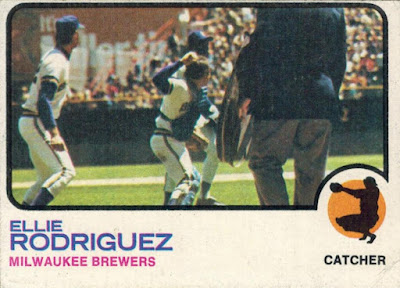 Most cards (set) -- 1973 Topps (24)
I long assumed 1993 Upper Deck was the most-featured set in my frankenset, but of course I was overlooking a monster with '73 Topps.
'93 UD is indeed the runner-up here (20 cards), and probably has more frankenset-worthy cards on the whole, but the great cards in '73 Topps are really great, and thus more apt to be featured prominently throughout these pages of craziness. 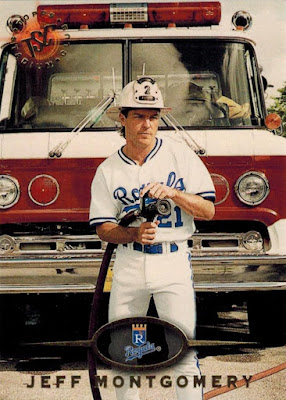 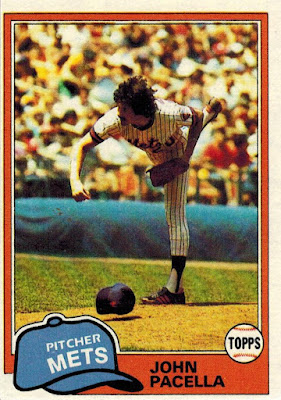 Most cards (brand) -- Topps (224)
Your standard basic Topps is the easy branding king here - its 224 total cards occupy just over a third of my entire frankenset (this doesn't even count Stadium Club since I entered them as a separate brand altogether), and more than double its next closest competitor in Upper Deck (100).
For all my oohing and aahing over this one-off set or this oddball, a lot of the time you just can't beat a good ol' Topps base card. 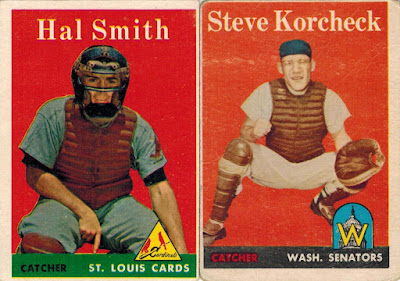 Oldest card(s) -- 1958 (x2)
These stylish backstops with one-bar masks and oven-mitt gloves represent the oldest cards in my frankenset, and further proof that I'm a sucker for a good catching pose from any era of cardboard.
Hal Smith in particular probably has an eternal place in my frankenset - the card he beat out for the #273 slot went on to win the whole shebang in my Second Frankenset voting, so if that couldn't take him down I don't know what could. 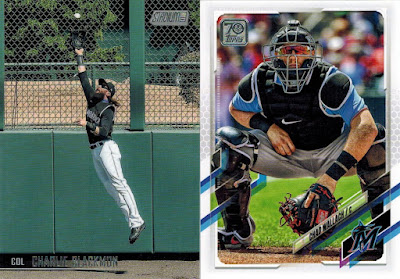 Newest card(s) -- 2021 (x5)
I think most of us can agree that 2021 has been a pretty dull year for cardboard, but even in the midst of that despair it's managed to add five new cards to my frankenset! 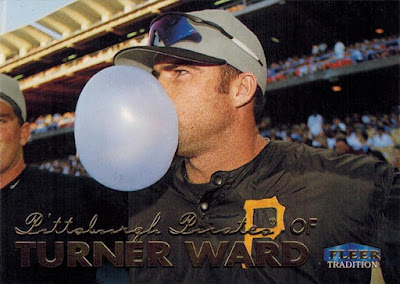 Most cards (team) -- Pirates (35)
This is probably more just dumb luck than anything, but the Pirates are the most-represented team in my frankenset, just beating out the Giants (34).
I think this is because the Pirates have been around for a long time, and have thus had more cards produced than a club like the Diamondbacks, but that's my only guess. 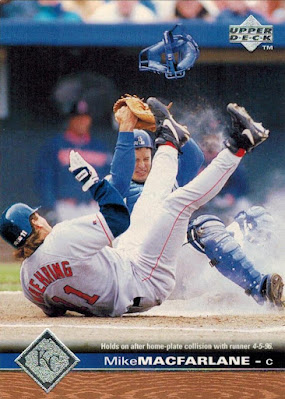 Most cards (mini-collection) -- Plays at the Plate (67)
The vast majority of cards in my frankenset don't belong to any specific theme of mine, but as far as mini-collection representation goes, Plays at the Plate is the most ubiquitous one here, besting Throwbacks and Double Dips (56 each) by a fair margin.
I tend to think this is because PATPs create so many moments of impact and various other terrific photo opportunities, not running together as much as double plays or guys jumping at the wall tend to. 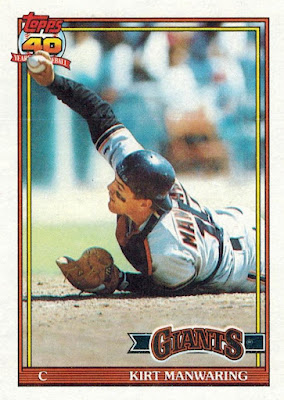 Most cards (player) -- Kirt Manwaring (6)
One long-assumed suspicion turned out to be correct - Kirt Manwaring is indeed the Lord of the Frankenset with six total cards in the binder, just edging out Mickey Morandini & Jose Rijo (5 each).
I don't think any otherwise obscure player has had as many consistently great cards as Manwaring - he's got a few more in my Second Frankenset, too - and I'm at a loss to explain why. My only guess is that card companies secretly made a bet as to who could make the best cards of a random dude, and picked Manwaring's name out of a hat...or something. I don't know.
All I know is that I probably wouldn't care who Kirt Manwaring was if I hadn't started this frankenset, and when you get down to it, that's really the best thing I can say about this strange little corner of my collection. I find out things about baseball cards I would've never discovered otherwise.
And in the end, I hope you learned something from this offbeat obsession of mine, one I didn't think would interest a single soul besides myself.
Posted by Nick at 5:21 PM

This 3rd Frankenset of yours, is relatively similar to my wackys theme, which at some point I will update my spreadsheets on those even though I don't consider it (mine) a frankenset. I've done several of those and still have yet to begin posting the last 4.

Manwaring isn't a Legend Of Cardboard for nothing!

I'm certainly interested! I'm not surprised '73 Topps had the most cards.. some are still burned into my memory!

I would have expected a large market team like the Yankees, Dodgers, or Red Sox.

As the inspiration for my own frankenset(s), I was delighted to see this stats post. I did a similar post a while back. Your Frankenset voting posts were my favorite when I first started reading card blogs.

Also thought it was interesting that your frankenset has 2021 cards in it. Must be an ongoing type of project?

Yeah I've been tempted to put together a Manwarig binder.

1973 Topps is a fantastic set; I can't believe how much negativity I've seen towards it. It's one of my all-time favorites.

Those are some great cards! The Pirates deserve to win something, might as well be team of the frankenset!