Best of the unlicensed 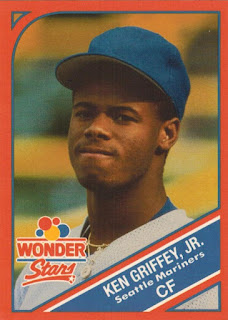 Unless you've been living under a rock for the last 24 hours, you've probably heard by now that Topps lost its MLB licensing agreement to Fanatics, effective at some point in the next 4-5 years.
I hesitated to even mention it on the blog because it seems like the card community has already lost enough of its mind discussing it. I also wasn't sure what to write about it because, after an understandable initial groundswell of questions, my present opinion is...it's simply too soon to know. Topps losing its licensing agreement does sound bad. This does seem like yet another MLB middle-finger cash grab. Fanatics could completely wreck the card industry. But right now we just don't know - the MLBPA agreement doesn't even take hold until 2023, and the MLB one three years after that.
A lot of this is simply still too unclear. It remains to be seen if Topps could and/or will keep making cards without a license. My gut tells me that I hope they do. I don't miss the days of eight different brands on the shelves, but I've also never liked the unchecked world of one, single licensed company force-feeding us. I give Panini a lot of crap, but in the long run, it's nice to at least have the option to buy their stuff, if for no other reason than to take a break from the constant flurry of Topps branding.
That said, I can't honestly sit here and say unlicensed cards are anything revolutionary. Most unlicensed sets get a rap of being dull and boring because, well, most of them are dull and boring. Oddballs with blank hats are good for a novelty here and there, but they're not cards I fawn over when I'm going through my binders. If Topps does decide to go forward with unlicensed sets in the future, chances are they'll be a step back from their glory days. But it doesn't necessarily have to be that way.
In the end, the route I've decided to take in writing about this watershed moment is to make a list (shocker) of the top 5 unlicensed brands/sets out there - mainly to show that the strange world of blank hats and jerseys doesn't always have to equate to eyesores. 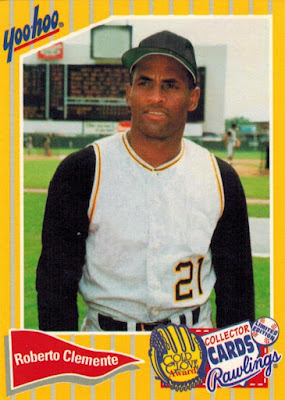 #5 -- 1994 Yoo-Hoo
Simply one of the best-looking unlicensed sets out there - even though there's no escaping the lack of logos here, these show you don't have to just throw your hands up and surrender to a quiet, unmemorable design without a license.
(I also have still never tried Yoo-Hoo.) 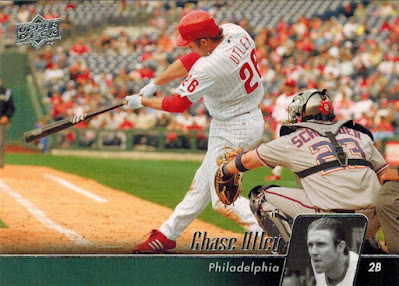 #4 -- 2010 Upper Deck
I'll go out on a limb and say that 2010 Upper Deck might well be the strangest set ever made, and for that alone it's always held an odd place in my heart.
If I had to predict what Topps might do in the future without a license, I'd venture a guess that it'd look kinda like what UD did in 2010 when they lost their license. And if Topps is the vengeful sort, maybe they should take notes, because 2010 Upper Deck is basically like a huge F-YOU! to Topps. Lots of these cards only half-heartedly try to hide their logos, which (unsurprisingly) resulted in a lawsuit effectively ended UD's baseball card days. (I've heard that UD had planned a Series 2 release that never came to light because of that lawsuit.)
Granted, this isn't a particularly thrilling set by any means, but it's still an endlessly fascinating rage quit to look back on and wonder. 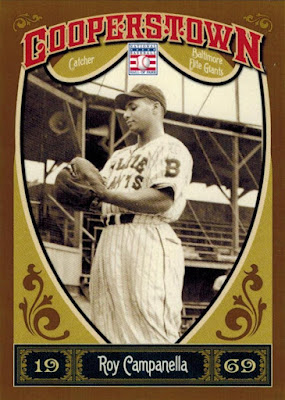 #3 -- 2013 Panini Cooperstown
Panini Cooperstown was great because it showed that you can still honor baseball's legends without simply shoving Babe Ruth and Nolan Ryan into every single gosh-darn set.
The overproduction of the Seavers and Cobbs of the world has meant that quite a few dudes with plaques in Cooperstown have basically been given the shaft by the card industry. Panini Cooperstown found a terrific niche in the hobby also giving the Burleigh Grimeses and Rabbit Maranvilles their rightful places on modern cardboard.
Plus, as this excellent Negro Leagues Roy Campanella should show, they found a way to be creative with the lack of logos, rather than seeing it as an unassailable demerit. 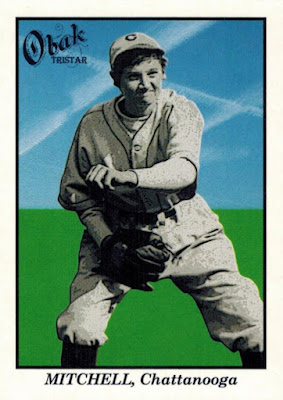 #2 -- 2009 Tristar Obak
I love Tristar Obak for the simple reason that I've never seen a set that digs so deeply into the ignored and forgotten minutiae of baseball history.
To use a popular saying I'm quite fond of, I need another card commemorating Cal Ripken Jr.'s 2,131st game like I need a hole in the head. Not that it wasn't a monumental achievement, but it's been shown over and over and over on baseball cards. Instead, Tristar Obak gives us glossed-over pioneers like Jackie Mitchell, the first female in history to sign a professional baseball contract. Or you've even got Jim Bouton recognized not as a World Series pitcher, but as an inventor of Big League Chew - the list goes on and on. (The brand itself lasted for a few years, and the designs are all interchangeable, but I'm choosing '09 here because it has my favorite player selection.)
The only complaint about Obak is that the photos aren't great, but that's more of a testament to how far into the rabbit hole they dug - there simply aren't a lot of photographs (much less clear ones) of some of the forgotten greats they chose to celebrate. 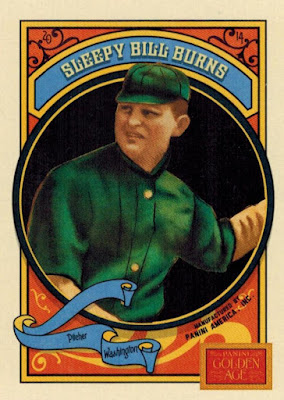 #1 -- 2014 Panini Golden Age
I still have dreams of Panini Golden Age.
It's a brand that, for my money, so clearly outdid Topps in every single attempt to honor both baseball and pop culture history. When A&G said here's another card of some dumb podcast bro, Golden Age was giving us cards of Joey Ramone. When Topps made their 2,744th Don Mattingly card, Golden Age was giving us cards of Sleepy Bill Burns(!). It's just such a joyous brand, and 2014 Golden Age was my easy favorite of the lot because of the groovy design.
Without a license, it's just too hard to make a modern set that can compete with the fully-licensed gods. People aren't really gonna want cards of Gleyber Torres in a blank hat when the full-logo ones are right there. But Panini, like most of the other sets on this list, did it right here - they chose to look backward, and not forward, and outdo Topps's meager attempts to paint a full picture of a sport that does a lot of business in looking to the past.
As I said earlier, I'm thinking an unlicensed Topps set, if it comes to light, will look more like 2010 Upper Deck than anything else on this list. But if I'm talking about what I think should happen, I'd love to see Topps go back and make something like Golden Age. I don't know the official laws and stipulations licensed companies have to follow as far as copyright/estate rights, but not having a license does seem to open up some avenues as far as not having to fill every modern set with the generic roster of greats. You've got the leeway to feature the Oscar Gambles and Eddie Gaedels of baseball lore, room to close those obvious gaps of baseball lore. The gaps they had to leave Panini to fill.
In the meantime, though, I suppose all of this is just a roundabout way of saying we'll simply have to wait and see, because I'm still waiting on that crystal ball.
Posted by Nick at 5:19 PM

Tristar Obak is so awesome for all the reasons you stated. And I had no idea 2010 Upper Deck was unlicensed, though I haven't seen that many of them over the years.

YooHoo set is OK. No interest in the others.

Losing the MLBPA licensing agreement pretty much kills the unlicensed stuff doesn't it? Panini and Topps wouldn't be able to use the players at all.

We'll see what happens. The thing is, there's really been nothing stopping Topps from doing this sort of stuff all along. I don't know how well they'd make that pivot. But there certainly is an opportunity for Topps to start making some Negro Leagues sets.

I bought a fair amount of 2010 UD, I think partly because of the surprise that it didn't suck, and I also appreciated the set as an act of defiance.

For anyone who didn't notice, the YooHoo Roberto Clemente card also has the Mets logo removed from the top of the Shea scoreboard

The last blaster I ever bought was 2010 UD, when it was rumored that the product was going to be pulled off the shelf and impounded due to UD defying the MLB monopoly.

Even if Fanatics releases cards that I'm not interested in, I've got plenty of older sets I can focus on finishing. We'll just have to wait and see.

Obak and Golden Age were fantastic products. When I think of great baseball cards without logos, the recent Sportkings issues come to mind. Love those singles.

Thanks for giving some love to the Obak. One of the many great things about the set is that it deliberately seeks out the odd corners. There are some Negro Leaguers with an Obak card (fewer than 400 base cards across 3 sets) that have never had a Topps base card (147,295 base cards a year, or maybe it only feels that way!). Its also quite funny how they try and go different even on the all time greats - both Williams and Musial pictured fielding but not hitting, for example. Probably my all time favorite - the Pat Venditte switch pitcher card showing him throwing both righty and lefty - https://www.comc.com/Cards/Baseball/2009/TRISTAR_Obak/28a/Pat_VenditteThrowing_left_and_right/4660752 - with the lefty only and righty only variations.

Golden Age and Cooperstown are great too.

I've got some Obak cards on watch lists, but have still yet to actually ever get one. Golden Age will always be one of my favorites, though I prefer the inaugural edition myself.