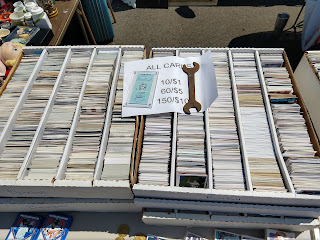 It wasn't long ago that I was fretting over the eventual fate of dime boxes in this money-hungry card universe.
I figured it was a legitimate concern, because who's gonna sell dime cards when you can bring your $100 Mike Trouts instead? Why cater to the people like myself who routinely pay for cards with folded-up singles when you can be rolling in crisp hundreds? I am, admittedly, somewhat of a pessimist, but I thought the extinction of dime boxes was something to seriously be worried about. But I guess there's a small glass-half-full somewhere in this wide universe, because what did I find at the flea market this past weekend?
Dime boxes! 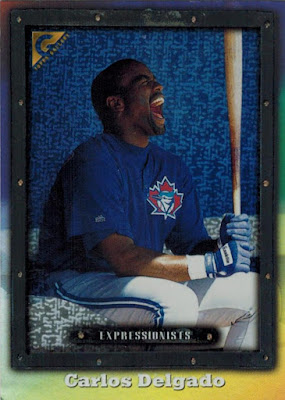 WOO-HOO!!!!!!
There, under a bright Sunday sun, were dime boxes to be dug through to my heart's content. I'm going to show you all the card joys and finds in a minute here, but the real highlight of all this was the sheer peace in knowing that, at least for now, dime boxes exist again!
My only regret was that I didn't see this vendor earlier in the afternoon - I only got to dig through about three of the boxes you see there (wrench and screw-down present because it was mighty windy, with cards and other objects blowing away like tumbleweeds). The guy had at least a half-dozen more boxes under his table which I happily would've perused had he not started packing up for the day. But I can't complain, because 450(!) cards and one bad sunburn later, my first official dime box dig of the post-vaccination era was complete - plus the guy only charged me $20 for the lot(!!), which actually comes out to less than a nickel per card(!!!).
(Note to self: bring sunblock next time.) 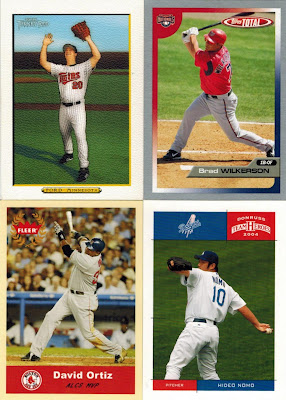 And the cards themselves were nothing short of supreme - they were mostly late-90s/early-2000s gems that I'm convinced all but fell off the face of the earth at some point in the last 15 years.
Turkey Red, Topps Total, Donruss Team Heroes - just generally lots of good stuff I usually don't have a prayer of finding in the wild. 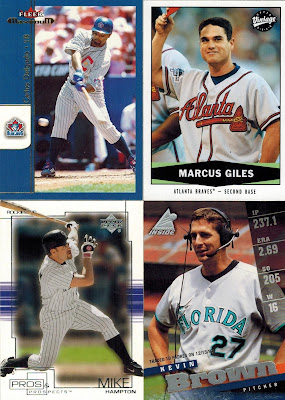 The '90s and aughts generated more mini-collection hits than any other era, and as expected, I walked away with a small goldmine of those. 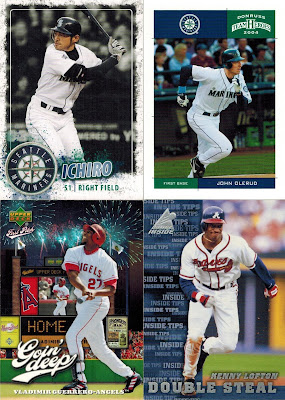 Bigtime player collection hits here, including a nifty Ichiro team-issue that somehow made it all the way to suburban Illinois. 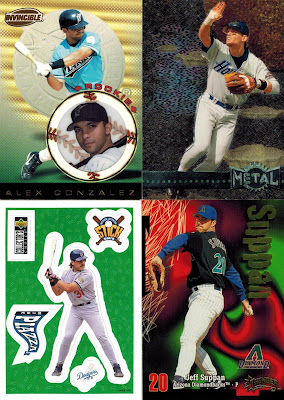 There wasn't a whole lot of filler in these boxes either - almost every card was browse-worthy, and I didn't see runs of '89 Fleer or other overproduced stuff that I have no problem skipping.
Every stack had something weird or cool or or wacky or generally noteworthy. 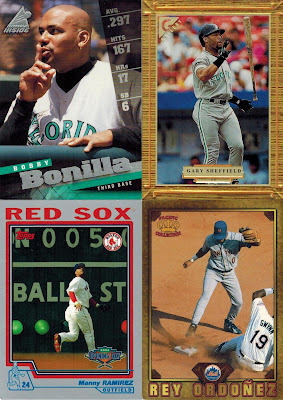 Better yet, I didn't have to jostle for space - any of the prospect-hungry card youths on the prowl quickly saw there really wasn't anything for them here.
One guy asked if there were any rookies in these boxes, and I actually saw him flinch when the vendor said No, they're all commons. 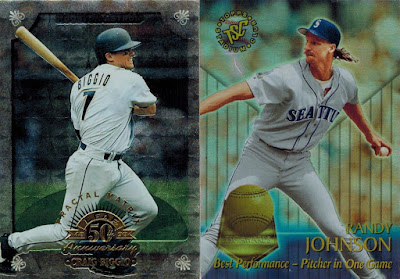 I remembered a different reason I love dime boxes so much - they're a space where I can basically shut out all the other uncouth trends in the card world, and just focus on the gloriousness of shiny objects or other random card happenings. 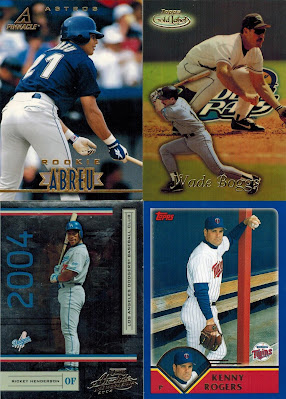 Maybe it's just my imagination, but this particular era of baseball seemed to produce a lot of famous guys in not-so-famous uniforms. 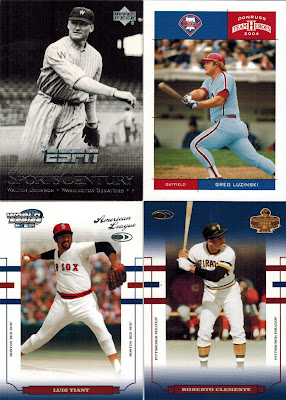 A few dime box legends here - the Greg Luzinski was an especially exciting find, because when's the last time he got a baseball card? 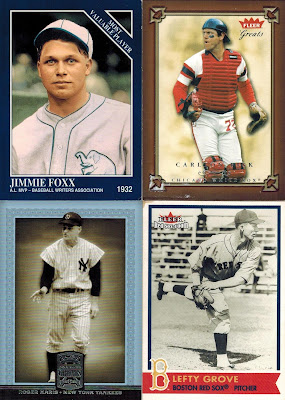 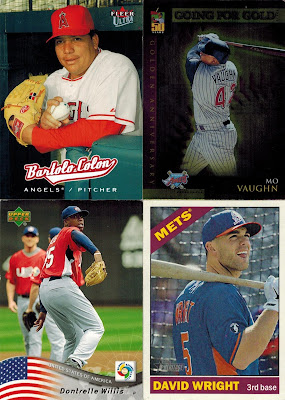 A handful of other dudes who've risen on my player collection radar lately - plus that Wright is a Heritage SP, which is always a dime box thrill. 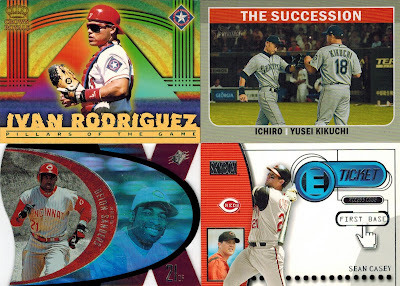 Horizontal greatness - yes, I still love that die-cut Deion Sanders even though I'm already dreading trying to slide it into a binder page. 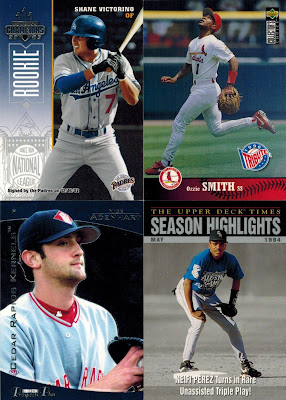 Something I absolutely despise doing is leaving dime cards left unturned - because even though I hand-picked a few hundred cards I wanted, I always wonder what was in those other boxes, what else remained a mystery.
But thankfully this generous dime box vendor told me he's planning on regularly setting up at the flea market this summer, so I know where I'll be heading the next Sunday I'm there. For now I'm content to know that dime boxes are back, and I've got 450 cards here to remind me of how joyous that news is - what I just showed you was the painfully abridged version of that dime box tale.
So until next time... 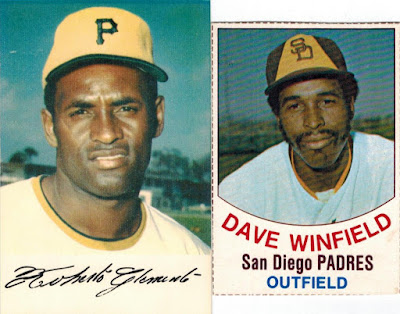 Oh wait, that's right - my flea market journey actually ended with those dime boxes, because I'd already been lugging around a bag of cards I'd acquired from other vendors throughout the day.
You ever come across card vendors who seem to be on drugs when pricing their stuff? I saw one such hazy-minded guy early in the day - one minute I saw a 1991 Topps Frank Thomas priced for $10, and the next I saw a Hostess Dave Winfield with a much more sane $3 price tag. I...don't get it.
I also shelled out a whole eight bucks for that Roberto Clemente, even though I wasn't even sure what it was - turns out it's some kind of membership card for a Clemente fan club from the early '70s, which was worth every bit of that eight dollars. 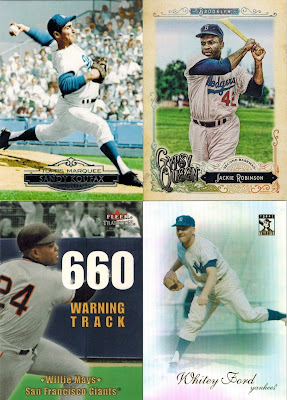 The guy with the massively overlooked 50-cent cards was back, and his binders had gone untouched since the last time I saw them (not that I'm surprised).
I'd already plucked all the top-tier cardboard from his binders the first time around, but there was still more than enough good stuff left over to supply a nice encore. 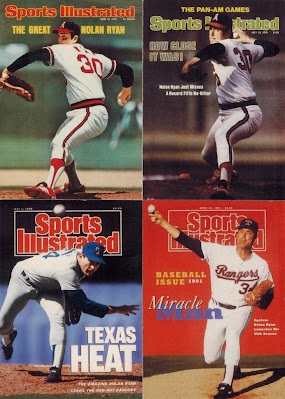 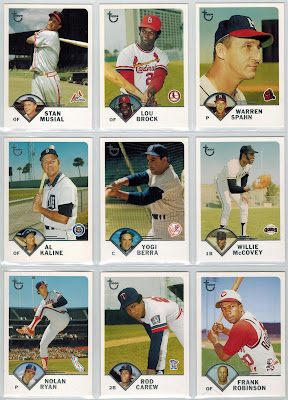 I saw someone buy two circa-1990 Michael Jordan graded cards for $75 while I was at this guy's table, which seems even more absurd considering I was down on the ground finding a whole page full of Topps Retired Signature stuff for 50 cents a pop.
Not surprisingly, this second run-through just about cleaned out everything I needed from this guy's binders, so hopefully he restocks 'em before my next trip to the flea market. 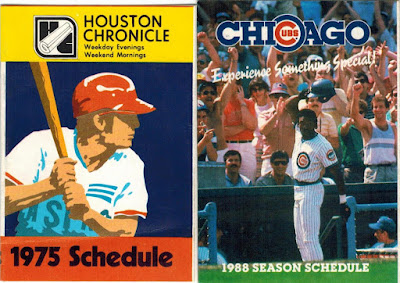 My regular card guy was back again on Sunday, and his discount bin was marked all the way down to 5/$1 by the time I found him.
I've never been a huge collector of pocket schedules, but these were too cool to pass up for 20 cents each. 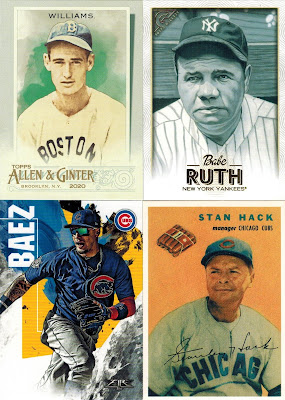 I'm continually fascinated by the sheer amount of different stuff I always seem to find from this guy - everything from Topps Fire to modern legends to vintage oddball reprints was in there this time around. 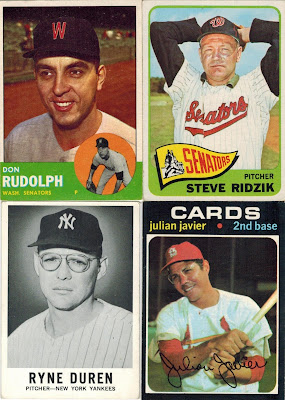 Also, 20-cent vintage!
Never gonna turn down defunct Senators at that price, and the Duren and Javier add to my growing collection of brilliantly bespectacled ballplayers. 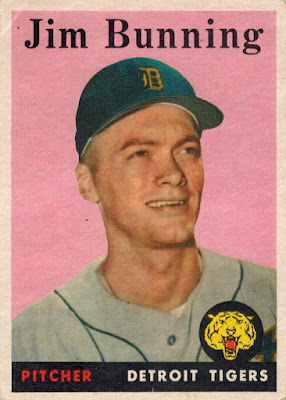 I'd almost forgotten about it in the midst of the dime box madness, but I also scored a card I've been wanting for a while with this '58 Jim Bunning from my regular card guy, mine for all of five bucks.
It's a fine early card of a HOF great, and how often do you see pink so prominently portrayed on cardboard? Dime boxes and 20-cent vintage is great, but it does feel good to shell out some cash for a bigger score...or at something that qualifies as a "big" card to me, even though I indeed paid for it with five wadded-up singles. 'Twas a great way to close out another successful day.
In the end, I guess I can always count on the flea market to remind me what's fine and good about this hobby, and how silly I was to think that dime boxes could ever go extinct.
Posted by Nick at 5:30 PM

Glad you found the dime boxes!! I found a few last weekend, and they weren't as varied as yours seemed to be, but still awesome!

Glad to spend such a card-productive day with you! ..I'm still laughing about that idiot directly in front of those dime boxes with the tins of "all records 5 dollars" boxes .. he couldnt have paid ME 5 dollars to take any of 'em,haha!

Man, looks like your show had a ton to offer! Glad you pulled so many cool cards for your collection.

Gives us all hope. Great digging, as usual.

I really do live in the arm pit of the card collecting world.

Clemente wins the round. But the best value is probably the 20-cent Ridzik.

Congratulations on finding a dealer with dime boxes... and thank you for giving all of us dime box diggers hope. I was hoping to hit my first flea market in over a year tomorrow, but just found out its opening has been further delayed.

Great post Nick ! There is only one flea market "near" me...and it is over 25 miles away,,,but will have to make the journey in the hopes of finding treasures like you uncovered.

Glad the dime boxes have not gone extinct yet.

Reading your post reminded me of some of the baseball cards in my dreams last night. I dreamed of a 1981 or 1982 Fleer Paul Molitor, with the same picture as his 1988 Donruss Diamond Kings card, and there was also a David Ortiz card. And that's all I can remember, the memories your post jogged.

Great cards, you came out like a bandit. What I love about your posts like these is as you read it, you can feel the excitement you felt finding the boxes. As I read your posts I get the voice of Ralphie from A Christmas Story as he narrated the movie, just pure excitement. I wish I could find a place that had some dime boxes so I could feel that excitement. Until then many of us live vicariously though you and your searches.

These dime box cards are great, hardly "commons". And a $0.20 vintage box is even better.

"One guy asked if there were any rookies in these boxes, and I actually saw him flinch when the vendor said No, they're all commons."

Must be sad to only collect one kind of card just like millions of others....

Nice pickups! Glad to see dime boxes are alive and well in your area!

Pocket skeds oh if i had the time, those are amazing as is that variety of goodness you got, this is what it's all about, low cost fun!