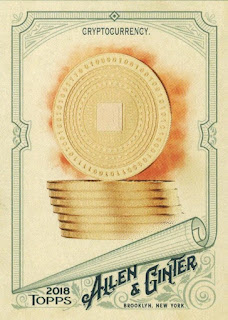 More and more these days, I'm convinced the world around me has lost its gosh darn mind.
A spot-on example of that happened recently, with stunning results for yours truly, as you'll soon see. I was casually scrolling through Twitter one afternoon during my lunch break at work, and I stumbled upon the news that, apropos of nothing, the Cryptocurrency card from 2018 A&G was suddenly selling for a good amount of cash. The thought instantly hit me: Hey, I have that card! I listed my copy on eBay as soon as I got home that night, and by the time I left for work the next morning, it had sold.
I don't pretend to understand the first thing about card values these days, or anything that goes on in the Bitcoin/cryptocurrency fantasy land. I have no idea why this card suddenly skyrocketed in value. I suppose some Bitcoin Bro decided this was the next goldmine, and his brethren flocked to it. It's been proven time and time again that when non-collectors get involved with baseball cards, up, up, up go the values, into insanity. And this low-end collector is all too happy to take their money.
In the end, I netted no less than $60 for a card I'm pretty sure I found in a dime box three years ago. 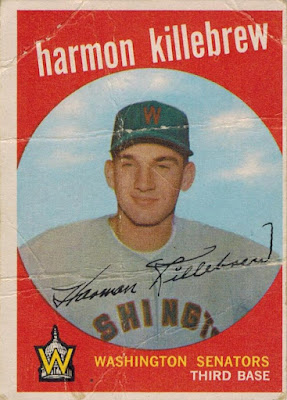 It didn't take long for the thought to hit me: what cards could I get for that same sixty bucks?
I sure don't need any excuses to spend money on baseball cards, but at least this way I could write it off as a sort of challenge. So I took that $60 and went on a bit of a shopping spree - starting with this well-loved '59 Topps Harmon Killebrew off my "Keep Dreaming" list. This is the kind of card designed to cost us poor collectors an arm and a leg - a devilish '50s high-number (#515) of a popular HOFer, rolled into one.
I managed to snag this poor creased Killer for a scant $10 on Sportlots, which was about a third of the price of the next cheapest copy I'd ever seen. 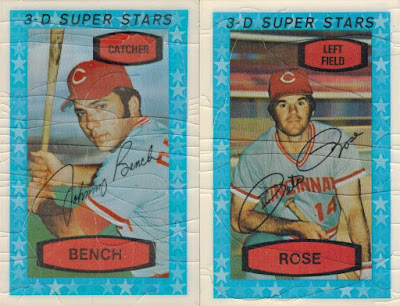 Better yet, that same seller even had a couple Big Red Machine Kellogg's that accompanied the Killebrew for the ride - and at a mere $1.50 a piece, I don't mind the cracks one bit. 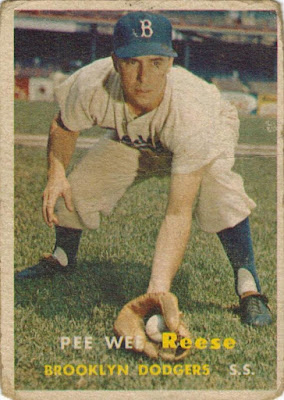 Even when I have found money to spend, I can't resist my bargain-hunting (aka cheap) ways.
I generally look for the lowest-grade and most beat-up copies of big cards as I can, which often results in pinch-me deals - this spectacular '57 Topps Pee Wee Reese, for example, cost me all of $10, and it isn't even in terrible shape. 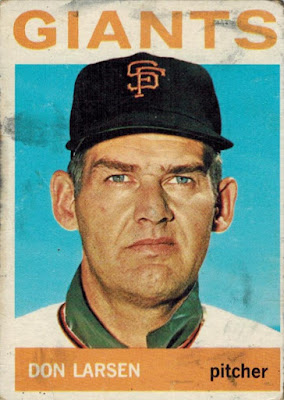 Of course, this strategy can cause problems from time to time.
This '64 Topps Don Larsen has been on my want list for a while now (yet another mugshot that shows his perennial Who farted? baseball card grimace) but I've never been able to find one cheap because it's another dastardly vintage high-number. I thought the stars were aligning, then, when I found a heavily discounted copy of said Larsen on the very same night I sold the crypto card.
The seller listed it as "acceptable," which is usually good enough for me - though I did find it curious he didn't include any pictures of the back on his listing. 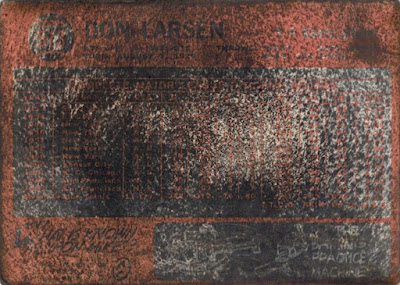 I realized why when the card arrived in the mail - I still can't decide a) what this is, and b) if I want to know what this is.
Even for me, this is a bit much, and while this is a fine placeholder for now, I hope to upgrade to a normal(ish) Larsen one day - hopefully one with a back that doesn't look like it was colonized by aliens. 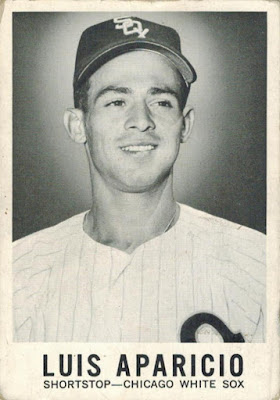 Smaller $5-10 finds are awesome, but I did want to make one big splash with my newfound crypto cash.
One card I was looking at as a possible nominee was a '56 Topps Luis Aparicio rookie, but all the copies I sifted through were just a bit more than I wanted to pay. I did, however, snag a 1960 Leaf Aparicio (Card #1 in the checklist!) for about $4 - a great card from an underrated set I've always found oddly appealing.
Turns out I was on the right track with '56 Topps as my Big Splash - I just had to cross to the other side of Chicago to find it. 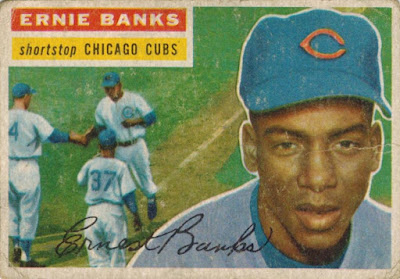 If you're gonna hunt a big card, then I think this is a sufficiently big one to spear.
It ate up just about half of my crpyto earnings, but now I can say I'm the proud owner of a 1956 Topps Ernie Banks, which predates my next-oldest Mr. Cub by a full three years. Just an other-worldly card from one of the most beautiful sets ever made, certainly not anything I planned on adding to my collection in this lifetime.
I stared at Ernie for a good two or three minutes after I slid him into my binders, next to all his friends from '56 Topps, still not quite believing it only took the sale of a weird card of fantasy money I found in a dime box to reel him in.
If this is what it looks like when the world loses its mind, then bring on the madness.
Posted by Nick at 5:30 PM

Man,that's as good a return as I can imagine,good job!!

I did the same thing when 2014 A & G Dave Portnoys were selling for $60 a pop a few weeks ago—except I had 5. Turned them into a t206 Ed Walsh. Crazy times with some of this modern stuff.

Oh, and great haul there!

Banks is a ho card, so Reese pulls off the upset.

I remember when this card was going for weird prices 2 years ago. Hasn't stopped huh? I've got to get over my phobia of selling stuff. There are way too many sucker ... er, eclectic collectors ... out there.

congrats on both the sell and the banks!

Good move, you may find it again in a dime box within 5 years.

talk about a great return on investment!

Nick, awesome job! As you know, I love doing "eBay flips" like this, and you killed it. Those cards you picked up are so iconic and will bring you so much more joy than that crypto card. You knocked it out of the park!

I wish I would've bought a few copies of that Crypto card, and the Egg that seems to be so popular right now as well, but even for a dime apiece they seemed overpriced to me.

That's a great swap. Loving the Banks and the Larsen (lol the who farted look).

Great work on turning that crypto thing into some fantastic cards! I hope that's not mildew/mold on the '64 Larsen. I've seen that in cards that have sat in damp Long Island basements for decades - never quite that bad though.

Makes me super happy to see a silly modern card flipped for so much awesome vintage! Congrats!

That's incredible, turning what should be a 10 cent card into some serious vintage.

The back of that Larsen is a mystery! I love it.

Well done, Nick. That's the best way to re-invest - and the thought that a card that says "cryptocurrency" on it would sell for $60 is laughable; I try not too hard to think about why a card that says "Harmon Killebrew" is any different, though....

Thanks for informing us about the Cryptocurrency card. Found one and threw it up on eBay for $50. Someone offered $45 and I couldn't hit the accept offer button fast enough.