Only a team collector 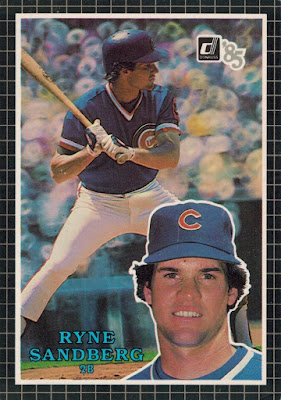 I've said it a million times before: I am not a team collector.
My goal as a collector has never been to hoard every Cubs card ever made. I suppose that aligns in some ways with how I enjoy baseball as a whole -- as much as I like the Cubs, I get just as much enjoyment out of following specific players, even if said players never wore/will never wear a Cubs uniform. So, then, I guess you could say my binders are basically one big universe of player collections.
But while I'm not consciously pulled by the temptation of team collecting, I've noticed certain features of my collection that could pretty much only exist in the binders of a team collector. 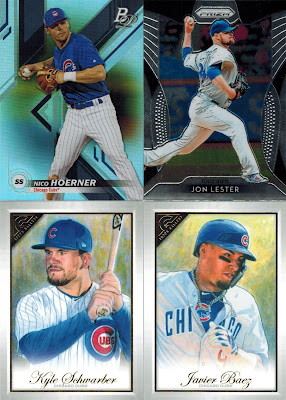 First off is the simple fact that people send me a lot of Cubs cards -- as shown by the big flat-rate box of (mostly) Cubs that John of "Johnny's Trading Spot" dumped on me recently.
I may not specifically collect Cubs, but I easily got more enjoyment out of a big box of Cubs than I would out of a big box of, say, Giants cards or something. I follow the Cubs more, so I'm more immersed in their history, and their players. Pulling a Cub from a pack of cards, or seeing a Cub I need pop out of a trade package, always supplies a smidge more joy than most other non-Cubs I collect. I simply want them more.
Wait -- isn't that something a team collector would say? 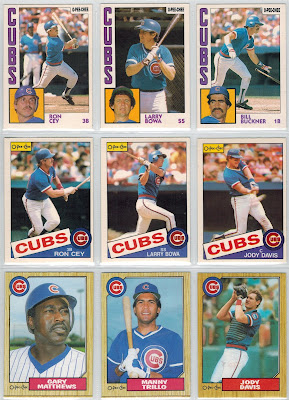 With the exception of Jody Davis, all of these one-time Cubs are probably better known on other teams.
But because of my bias, I tend to think of them more as Cubs, and often get more enjoyment out of their Cubs cards (especially OPCs!) -- only a team collector would do that. 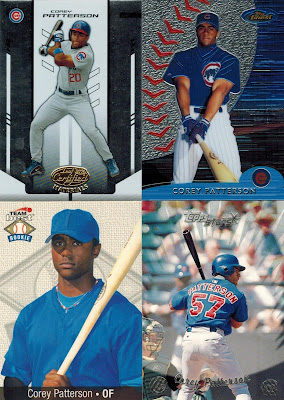 Only a team collector would have a weird sort of nostalgia for failed prospects of their youth.
Corey Patterson is perhaps the biggest bust in Cubs history -- impressive considering their woeful track record -- but he's oddly always had a place in my "good" binder of Cubs dudes. And people like John sure like to supply me with Corey Patterson cards, probably because they're so anxious to get rid of 'em.
So send me your Corey Patterson cards, I guess, because for some reason I'm willing to give them a home. 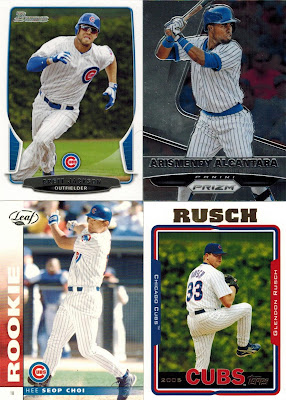 Even beyond Corey Patterson, the Cubs are the only team whose failed prospects and/or forgotten names still manage to excite me.
I don't really collect any failed Marlins prospects, mainly because I don't know any of them -- but for some reason Brett Jackson(?!) occupies almost two whole pages in one of my Cubs binders. 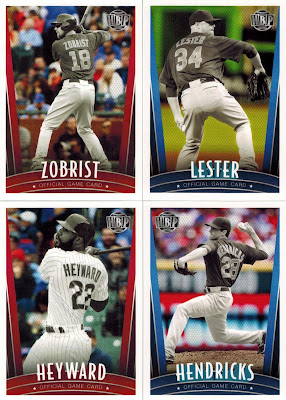 Only a team collector would happily take these strange Honus Bonus cards from a few years ago that seemed to banished to obscurity the day they came out (is Honus Bonus even around anymore?). 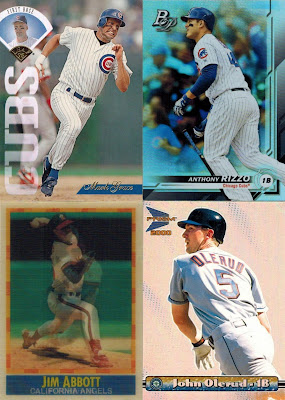 It's no coincidence that two of my biggest player collections are longtime Cubs -- Mark Grace and Anthony Rizzo occupy almost an entire binder on my shelf by themsevles.
John did manage to send me a few cards to break out of my I'm not a team collector, I'm not a team collector mantra -- because, hey, I collect Jim Abbott and John Olerud, and they never played for the Cubs! 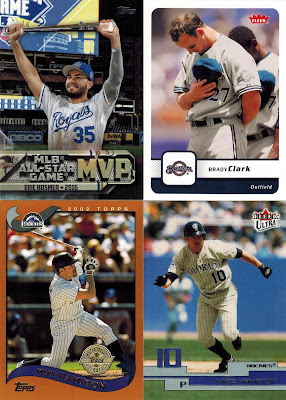 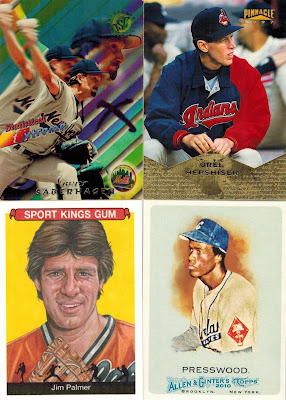 Other non-Cubs I collect, including a terrific A&G Negro League card I'm thrilled to add to my binders. 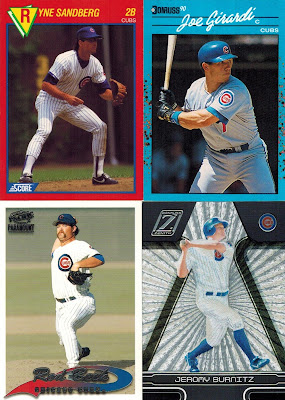 But yeah, I'd say a good 95 percent of the cards in this box were all Cubs -- and while I only needed a fraction of them, it was still a blast to dig through stack after stack of hometown greats, past and present.
When taken on average, I simply get more joy out of Cubs cards than any other team, and that sounds like something a team collector would say. 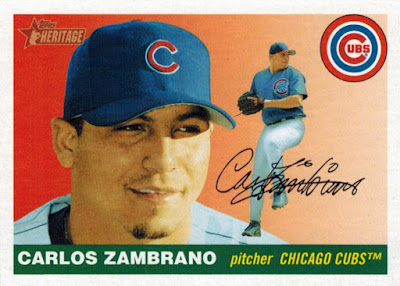 This is my 148th different Cubs card of Carlos Zambrano -- I own more of his cards than any other pitcher in Cubs history, which oddly sounds like a very team-collector thing to say.
The section of pitchers in my Cubs binder isn't led by more obvious names like Fergie Jenkins, or Greg Maddux -- no, Carlos Zambrano is the first guy you see, staring out at you when you pull the cover back. Like most Cubs fans, I think, I had kind of mixed feelings about Zambrano during his time here, but somehow I've managed to hoard a huge stack of his cards over the years. Or maybe they've hoarded me. I don't know. Like most team collectors, I'm often surprised at the amount of Cubs cards I own, even though they're right there in plain sight in my room, a few shelves over from where I'm sitting at this moment. They just kind of appeared.
I'm going to stop here because it's really starting to sound like I'm a team collector right about now.
Posted by Nick at 6:10 PM

I'm backtracking on the "team collector" definition as well. The other day I was putting some new cards into a mid-1990's Mets binder, glanced at the 1995 Fleer Mets and thought "It wouldn't take much to convince me to ditch those". I've already jettisoned Turkey Red cards, because I don't like them and it's not like I wouldn't have enough cards of Carlos Delgado and Matt Harvey without them.

I'm actually in the process out ripping a box of Honus Bonus right now.

I think the only time I've read about Cubs cards on your blog are when it involves care packages. I guess that's why I've never pegged you as a Cubs guy. In my mind, you're the king of randomness... and of course the ultimate "dime box" guy.

How many pages do you have of Josh Vitters? LOL

I've always thought of you as a collector of "cool" cards, who also happened to like Cubs cards more than other teams. I think I kind of had you pegged correctly.
Zambrano leads the way in pitchers cards? That is kind of tough for me to wrap my head around. I'm sure most of them have come your way because other collectors don't think much of him. But, he did perform on the diamond well enough to be liked by the card companies quite a bit.
Kerry Wood is the king of pitchers in my collection and it's not even close!

Honus bonus is one of those rare brands that I don't keep any of unless I get players I collect.

I've never seen a Honus Bonus card in the wild. I'd keep one from any team purely out of curiosity.

I appreciate the variety in your mini collections.