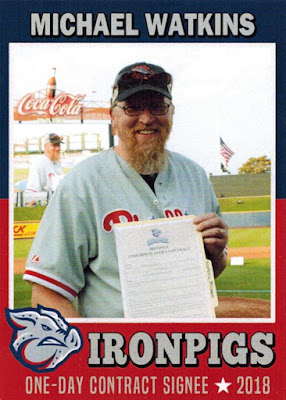 Lately I've had the feeling that my room is getting smaller.
This, of course, isn't true: my collections are simply getting bigger, that's all. But as I've gotten older I've felt more and more like my room is basically a storage unit for my baseball cards and books that I happen to sleep in. I had 90(!) binders of cards at last count, and though I've never inventoried my books, I know I own at least a few hundred (certainly doesn't help that I've worked with books for the last five years of my life).
I like to think most of my collections are well-organized, but I've never quite gotten the storage part down. Most of my card binders are crammed into bookshelves (ironically) and with the passage of time, they've started to overflow. There's a few binders sitting on top of both of my bookshelves, another couple binders stashed into a random cranny next to my nightstand, another couple in a gap by my bed, etc., etc. So you can see why I think my room's shrinking.
The logical solution here would be to stop accumulating cards, and really start to focus on a narrower scope of collecting instead of forcing my binders to balloon into oblivion with the inevitable end of my room caving in on itself. 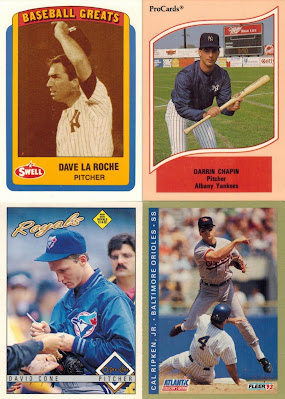 But is that what I'm really gonna do? HELL NO!
I get too much enjoyment out of watching my collection grow and expand to do such a thing. A point in favor of this recently came in the form of a gargantuan box o' cards I received from reader Michael W., who doesn't have a blog as far as I know but is on Twitter (@ugxtall88). Mike's been sending my stuff for a while now, but I really think he outdid himself here -- it seriously took me an entire night to go through everything he picked out for me. This was easily one of the best trade packages I've gotten in 2020...if not one of the best in my blogging history. I think you'll see why soon enough.
In addition to a stack of new mini-collection hits, Mike even sent me a card...of himself(!), as you might've noticed at the top of this post -- I've checked off many boxes in my blogging days, but I can't say I have a card of myself (yet...). 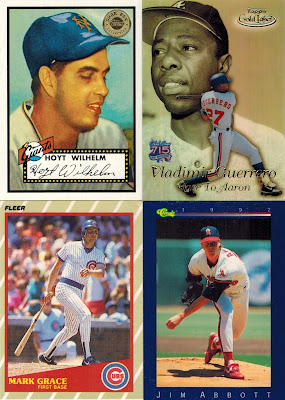 The binders that contain some of my bigger player collections seem to get bigger and overflow way quicker than the others.
I recently expanded to a fifth Cubs binder -- the first team to receive such an honor -- much thanks in part to the 400+ Mark Grace cards I've somehow managed to hoard. 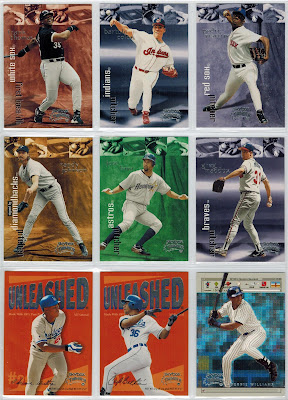 Mike mentioned in the note that came with this box that he'd opened an entire box of 1999 Skybox Thunder, kept a few of the cards, and generously bequeathed the rest of his pulls to me!
You can thank me later for not showing the pasty-white-guy lyrics on the backs (though cringe if you must), but I'd be remiss if I didn't mention how awesome those cereal-box inserts are. 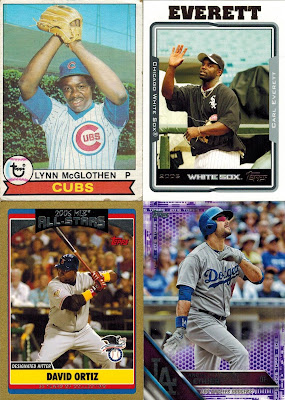 These seem to come up in every trade post I write: random cards that didn't quite fit anywhere else, but can't help but show.
You can probably count the number of those purple Toys 'r' Us parallels I own on one hand, and I miss the days when Topps would make a card like that Carl Everett. 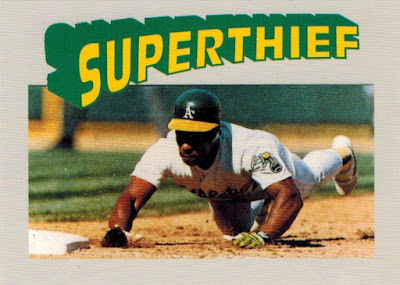 A major turning point in the saga of my room caving in on me was when I discovered the greatness of oddballs -- they're responsible for the growth of my binders just as much as anything else. 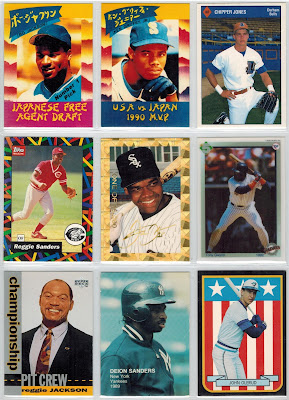 Unlike the way I collected in my youth, I don't necessarily have to be actively collecting a player to enjoy and cherish an oddball of said player.
Chipper Jones isn't high on my player collection projects, but I absolutely love that minor league oddball from Mike -- also the Reggie Jackson is the first NASCAR card I've voluntarily welcomed into my collection. 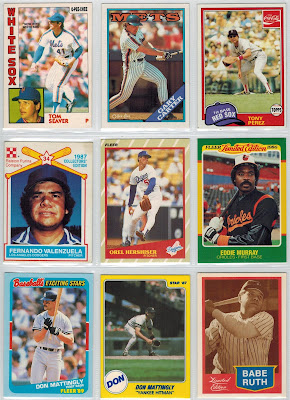 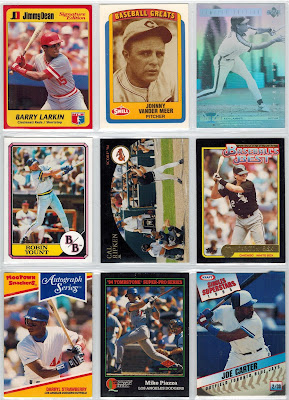 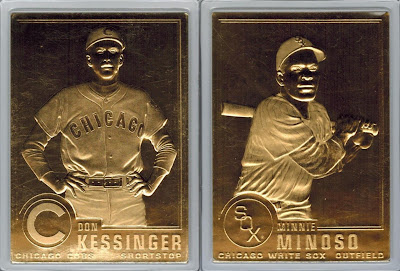 Despite what my scanner is trying to tell you, these laminate legends are actually really cool in person and nothing like the B-movie horror villain lookalikes seen here. 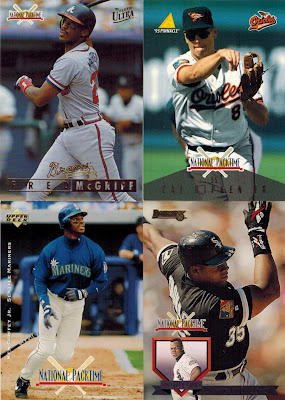 National Packtime cards rule for many reasons, perhaps mostly because, although some of the designs mimic actual '95 releases, some of them were never again seen on baseball cards (like that alternate-universe Pinnacle look). 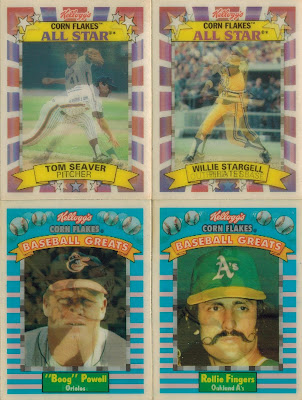 Later Kellogg's obviously can't light a candle to the legendary '70s sets, but that doesn't mean these aren't cool -- I never bring these up when I mention Kellogg's, and I kinda feel bad about that. 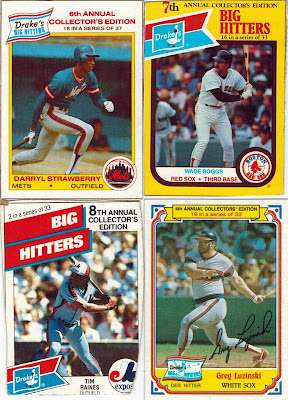 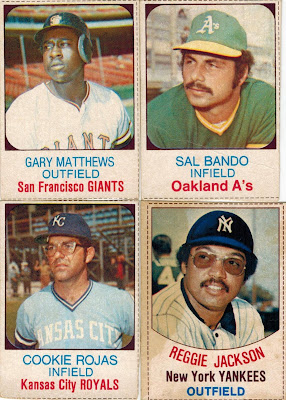 I rarely see one Hostess card in trade packages, much less the whole stack Mike sent me.
(Also, how did I not notice the perfection of a Hostess card of a guy named Cookie until now?) 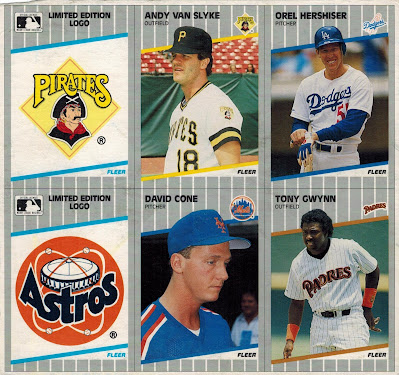 As I said, this wasn't just an ordinary trade package -- it was an entire huge box that arrived on my doorstep one afternoon, and Mike certainly made the most of the space with a few larger items.
The only thing better than box bottoms are box bottoms I get to cut out! 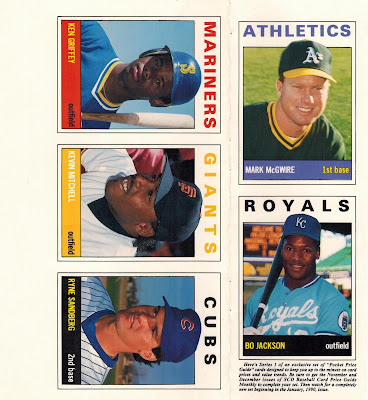 One of the best purchases of my life was buying a stack of uncut Baseball Card Magazine panels at a card show a couple years ago, and Mike gave me a chance to flash back to that joy with, yes, another uncut panel!
These have, of course, since been sliced up and distributed into my overflowing binders, because in the end I just get way more enjoyment out of individual cards than possible display pieces. 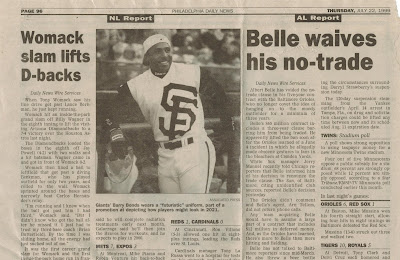 Probably the first time I've ever received a newspaper article in a trade package, but it's obvious why Mike threw this in for me -- here's a printed throwback to a weird time in baseball history, the short-lived "Turn Ahead the Clock" days!
The caption mentions that these jerseys were an imagined look at what baseball uniforms might look like in 2021 -- we've still got a year to make that happen. 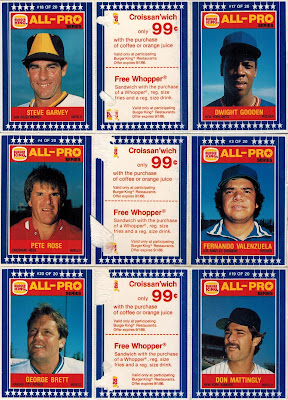 Whoa, full-panel Burger King oddballs!
(Looks like I'm only about 35 years too late for that sweet Croissanwich deal.) 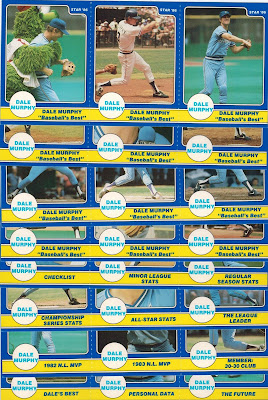 Much like the aforementioned Burger King cards, I own a few of those '80s Star singles but I'd never seen them still intact in full panels until Mike came along.
I'm always on the hunt for cards from these sets because some of 'em feature stuff you're not gonna see on a baseball card anywhere else -- like Dale Murphy getting bear-hugged by the Phillie Phanatic! 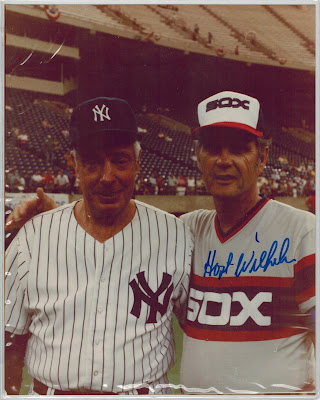 In the end, however, it wasn't your standard stack of binder-inflating baseball cards that delivered the real gut punch from Mike's box -- it was, of course, this real, actual signed photo of HOYT (and friend).
Hoyt and Joltin' Joe's respective careers just missed crossing paths -- DiMaggio's last season was 1951, and Hoyt made his debut in '52 -- but they must've buddied up at some point later in their lives because they look quite friendly here. I've never been a collector of 8x10s or anything of that ilk but Hoyt is certainly gonna have to be one of the exceptions to that rule, because this is the first signed photo of his I own and it's absolutely incredible. It's the kind of thing that makes me regret the years I just kinda shrugged off ever owning one.
As you can probably see, in the battle of Mike vs. my binders, my binders obviously didn't stand a chance -- so I'll just be here waiting for my room to collapse on me, 'cause I'm not giving any of this stuff up.
Posted by Nick at 6:10 PM

You've seen my apartments over the years...there'll be room for your precious things...just think,when you have your own place,it'll barely take up a room!

Great variety of cards! Not sure I want to know but are the 89 fleer box bottoms white or gray back?

Wow! That is some really cool stuff! And just think...you'll be able to rent a storage unit for your cards when there's no more room in your place! (Not that I have to do that or anything.)

The first closer to be elected to the Hall of Fame, if I'm not mistaken.

The IronPigs Watkins, Jimmy Dean Barry Larkin, Japanese Bo, and Gwynn box bottom stand out to me from the card stack. Good stuff.

I have had that Burger King Fernando sitting near my living-room chair for a while, in a stack of cards waiting to be put into binders. But it's still sealed, and until I saw this post I have no idea that it was ALSO a Pete Rose card! Very cool.

I've been waiting for the moment when you realize that the walls/binders are closing in with the way you accumulate cards. Maybe build a shed out back?

Jealous of those Hostess cards, of course. And, geez, the purple Ethier going to you? Introduce this Mike guy to the Dodger fan!

I pulled that same NASCAR Reggie out of a dime box, interestingly enough.

Hi Nick
I am glad to see the cards have a great home. It was quite fun piling up the cards for a year or two. Your room sounds like my room 30 years ago- but now after 4 moves it is called a basement. There is always a spot for another binder or book in your collection.
If anyone wants one of my cards( I have about 10 or so available), just message me and I will send one out. Thanks, Mike

I need to find me one of those 1989 Fleer box bottoms with that Gwynn. Didn't even know that card existed. There was a time when I was excited to see my collection expand. The past five or six years... I've had to slow down due to lack of space. I feel like I can collect another decade or so before I need to start storing cards in my bedroom.

Tons of great stuff we don't normally see on the hobby blogs, gotta love it! Congrats!

So much awesome stuff there but I really dig those oddballs! That looks like it was fun to sort through!

Oddball madness. Is awesome. And dangerous.

What a package. (Nice Seinfeld reference there, too.)

The photo of Wilhelm and DiMaggio is great. Remember that there are 8 x 10 plastic sleeves designed to fit in a 3-ring binder...

Great cards, but I agree the photograph takes the cake!

Love that Hoyt/DiMaggio photo, and the '89 Fleer box bottom logos (especially the Asros.) I have the same concern about space in my card room/bedroom. Organization never ends, because there's always a way to reshuffle and clear some space. I've noticed that my team PC binders have reached full capacity. Has that stopped me from trading for more Packers and Red Sox? No sir! :)

Wow what a great haul. Absolutely chock full of great cards. Every time I would scroll down another card would jump out at me. My favorite though has to be the Japanese Bo Jackson. Would love to hear more about that card.

I most like the Cal Ripken Jr. card. The old guy with the old phone under him tops it off.

These are fantastic. What's the story behind the Superthief card? I wonder what the story is behind the Dimaggio/Wilhelm photo. It's not Yankee Stadium. I assume it's an Old Timers Game.

Fantastic variety there... and I wish someone would send me a stack of Hostess.

I have to say, though, that my favorite is the first card in the whole post. I saw it and said "1971 TOPPS FOOTBALL!" and then mentally squealed like a little girl. (I wish to emphasize the "mentally" part).