We asked for Jim Walewander, they said he don't work here 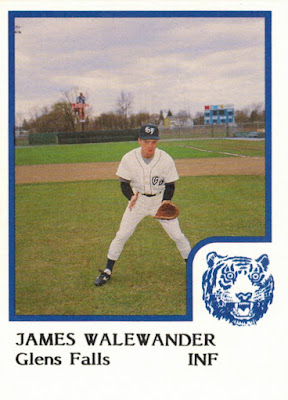 I spent the first 26 years of my life thinking that my small, suburban hometown had absolutely no impact on the world of professional baseball.

That changed a couple weeks ago, almost purely by accident. One table at the card show I attended last month had a few stacks of '80s minor league cards nestled inside a dime box. I was excited because a) you rarely see those anywhere, much less for a dime, and b) maybe there'd be a big name in there! A Ryno, a Tony Gwynn, a Rickey Henderson, who knows...

Turns out there wasn't -- in fact, the only card I bought of an actual player (mixed in with a few trainers, batboys, and PR guys of '80s minor league lore) was one James Walewander, seen here during his days with the Glens Falls Tigers of the Eastern League. 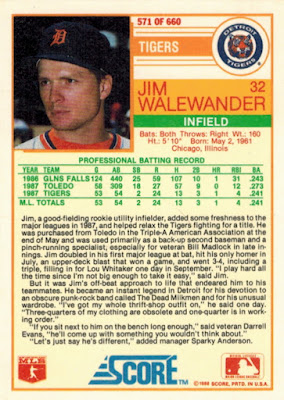 The only reason I bought the Walewander was because I recognized him as "The Dead Milkmen guy."

As hard as it might be to believe, the Dead Milkmen, of all bands, are actually mentioned on the back of a baseball card, a fact I will never tire of telling the world since the Milkmen have ranked among my favorite bands since high school. And it's all thanks to Jim Walewander, a one-time sparkplug Tigers middle infielder who gained notoriety for being a fan of the group, enough to warrant a mention on the back of his '88 Score rookie card.

But all things considered, that was all I knew about Jim Walewander: he was that dude who liked the Dead Milkmen. 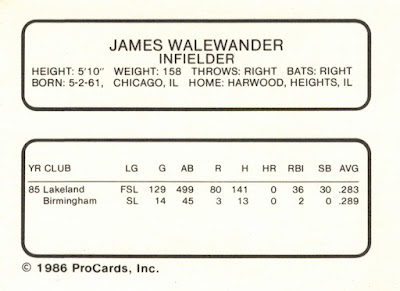 Flash forward to the following morning, as I was flipping through the previous day's card show finds -- it was then I came across the minor-league Walewander again, and honestly I'd forgotten I'd even bought it.

I flipped it over, somewhat absentmindedly. And there, in the stat heading, was something that made my head spin. Home: Harwood Heights, IL -- HEY, that's my hometown! (While I technically live in a town called Norridge, it and Harwood Heights are basically regarded as a single city -- my high school's name, for instance, was Ridgewood, a mashup of the two names.) 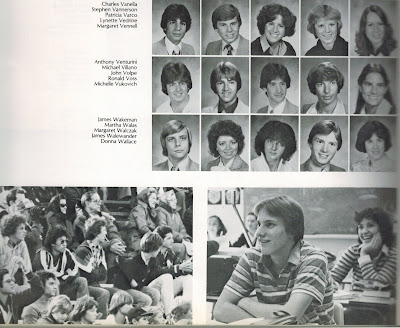 Maine South has produced a few big-leaguers, Dave Bergman and Adam Rosales probably the biggest names of all (non-sports alums include Hillary Clinton, by the way), but the ones I knew about went there either before or after my mom. But upon doing the math, I figured out that Walewander would've been a senior when my mom was a freshman. And sure enough, after I begged my mom to dig out her freshman yearbook, there he was: Jim Walewander himself! (Last row, second from the right.)

My mom doesn't remember anybody named Jim Walewander, which isn't surprising -- her graduating class was about as big as my entire high school -- but still, it's fascinating to think that she and him may have crossed paths in the halls at some point. 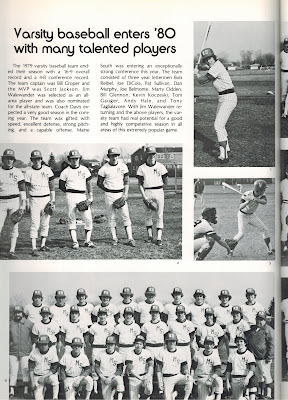 Not surprisingly, Walewander's also mentioned as a star of the varsity baseball team -- that's him in the small action shot on the right side of the page, and he's also third from the left in the middle row of the team photo.

At this point, the discovery I'd just made bordered on the unbelievable. My hometown isn't what you'd call a sporting hotbed. As far as I know, no one from my high school has ever played professional sports in any capacity. People barely know what baseball is around here. And until just recently, I never thought anyone who'd so much as stepped foot in my hometown ever wound up playing in the big leagues.

Guess I can't say that anymore. 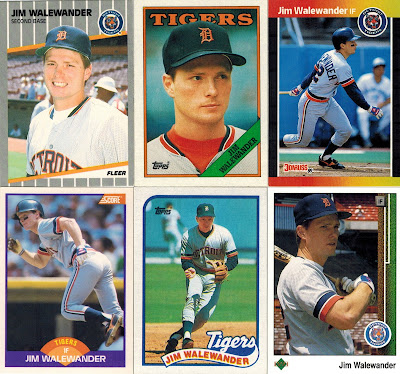 Naturally, I did what any sane person in my situation would do: I decided then and there to start collecting him, and immediately went to the 'net to track down all his attainable cards.

For better or worse, Jim Walewander's catalog is a small one, and I pretty much managed to scoop up his complete run of mainstream cardboard. Aside from a brief burst of glory in his rookie year with the Tigers -- during which his Dead Milkmen fandom became known and the majority of his cards were produced -- he didn't do much in the majors.

Walewander played sporadically with Detroit in 1987-88 (his 88 games in '88 would be his career high), and flamed out after cups of coffee with the 1990 Yankees (9 games) and 1993 Angels (12 games). I don't think there's any cards of his Angels tenure, but there is a scarce Topps TV single of him on the Yankees (along with a handful of Columbus Clippers minor league singles), which is immediately going on my white whale list, of course.

From what I can find, Jim Walewander retired after brief stints in the Angels' and Marlins' systems in 1994 (I was two years old!), thus putting a cap on a career that wouldn't affect my life until over two decades later. 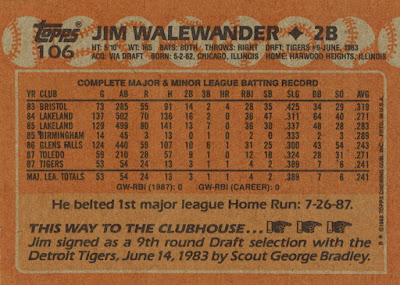 In the end, I have Jim Walewander to thank for what I'm about to say, what I've long dreamed of saying: my hometown is mentioned on the back of a Topps baseball card!

Home: Harwood Heights, Illinois. This card, and the millions of overproduction-era copies of it, will exist for all of eternity. And while I would've been happy to forever think of Jim Walewander as the "Dead Milkmen" guy, he's more than that now.

He's the pride of Harwood Heights, the guy from that little speck on a map I call home.

Don't you mean that Topps TV card would be a White "Wale"? Uh, Sorry, I'll show myself out.
Dig the Dead Milkmen.

Cool story and nice PC. Even cooler that your mom went to school with him for a year. (Even if she doesn't remember him.)

What a tangled web we weave, eh? Also, as a fellow punk rock enthusiast, I too share Walewanders and yours appreciation.

Never heard of the guy. But one of my childhood buddies was a huge fan of The Dead Milkmen. Good luck finding that Topps TV single. Hopefully it'll pop up in a card show dime box in the near future.

If you don't have Jim Walewander then your collection could use some fixin'... (Yeah, that doesn't really work).

That's pretty darn cool... I think there was a guy from my high school who made it up to AAA for a couple of games, but I don't think anybody has ever made it to the majors or made it on a baseball card.

What a great story! It's always cool to find some local connection with a professional sports athlete!

Don't forget that he was an Iowa State alum!

This is a neat story, not just that an MLB player is from your hometown but that your mom has a HS yearbook with him in it. I remember Walewander's name (because I studied the backs of baseball cards more than schoolwork) but until this post I couldn't have told you if he was a utility infielder or a backup outfielder. Also did not know he was a Yankee, even for a handful of games when they were awful(or as I like to call it, the good old days lol)

That's awesome! I'm from Sarasota, which has a lot of ballplayers around, partly from spring training, partly from being a retirement hotbed. My mom met Bo Jackson in line at a Publix, my dad used to sell programs while Michael Jordan was playing in the minors, Tim Raines Jr. was a coach on my JV baseball team, and I got to get a spontaneous hitting lesson from Fred McGriff when he randomly showed up at the batting cages I was at. Those are just a handful of some of the really neat experiences we've gotten to have here. It's great. But I think the coolest recent discovery I made was that Hall of Famers Heinie Manush and one of your favorites, Hoyt Wilhelm, are both buried here, and I was able to go pay my respects at both of their graves.

That's an amazing coincidence! Pretty cool to discover such a personal connection. For what it's worth, I have a buddy who knew Adam Rosales growing up.

Super cool story Nick, love that you found him in that yearbook!

James also played baseball in Milan Italy.
Went on to earn his MBA at UCLA and is now
employed at the Pentagon.