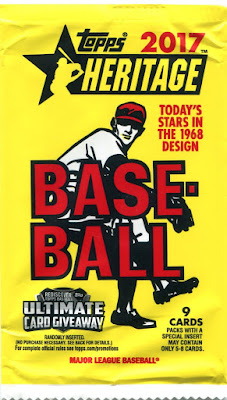 If there were ever a year I was going to dislike Heritage, this would be it.

2017 Topps Heritage, as you probably know, is honoring the infamous 1968 burlap design. It's not a particularly popular one amongst collectors, and I myself have never cared for it. In fact, I'd probably rank '68 as my least favorite vintage Topps design (though I go back and forth between '68 and 1970).

No matter the design, however, Heritage remains a must-buy for me, and I finally scored some from my local Target this weekend. Like I did with 2017 Flagship, I opted for a full retail extravaganza, purchasing a loose pack, a rack pack, a hanger box, and a blaster on Saturday.

I opened the first pack and prepared myself for a flurry of burlap. 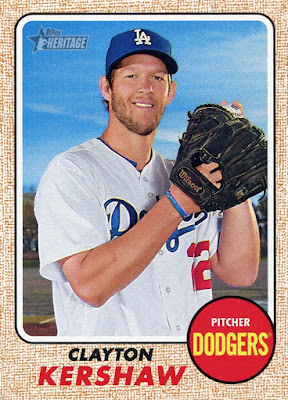 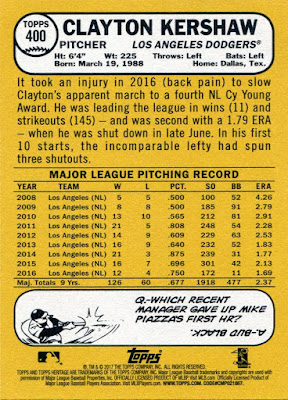 It's even more jarring to see such borders in this day and age because burlap strikes me as a very grandfatherish material. I can't say I have much burlap in my life these days, and I'm not especially bummed about that.

I will, however, give credit where credit's due: '68 Topps was the first Flagship set to feature anything other than a plain, white border, a daring move that paved the way for future great colored-border designs like '71 and '75 Topps. And the backs are terrific, as per usual from vintage Topps.

But in the end, Heritage most assuredly did not change my feelings towards the burlap: ick. 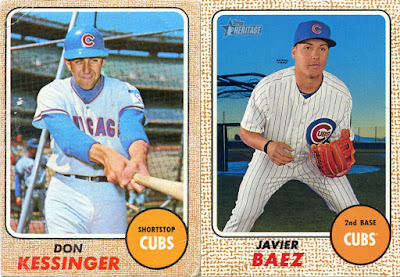 For comparison's sake, here's a real '68 Topps next to a Heritage knock-off, both featuring exciting young Cubs infielders.

Now that '68 Topps is in the mainstream again, I'm learning things about it left and right. For example: I never realized the burlap borders had variations before 2017 Heritage came along. As you can see on the Kessinger (and the Kershaw), the dots are spaced closer together than they are on the Baez.

It's not a particularly exciting discovery, but it's a discovery nonetheless, and I'm always eager to increase my cardboard IQ. 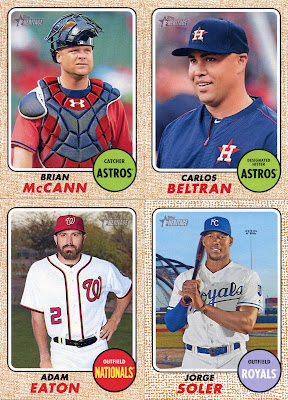 Heritage is often the first time we get to see players involved in offseason transactions in their new uniforms.

Photoshopping has been shaky in some past Heritage releases, but judging from this quartet, whoever was in charge of it this year was absolutely on point. 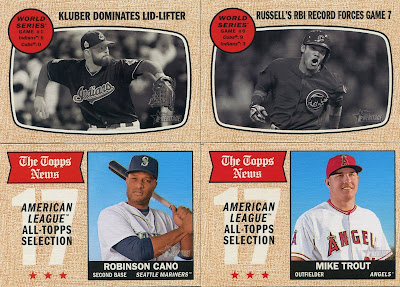 Subsets are abound in this year's Heritage, and the World Series cards are particularly exciting for me because they happen to feature the best (and most rewarding, obviously) Fall Classic I've seen in my life as a baseball fan.

I may not be the biggest '68 Topps fan, but I do love the black-and-white, TV-esque design of the World Series subset. 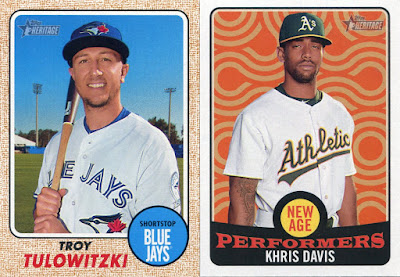 In yet another example of Topps sticking it to us lowly low-end collectors, they've increased the number of SPs in 2017 Heritage from their usual 75 to a whopping 100 (card numbers 401-500) this year.

Makes me glad I'm not much of a set collector, although it does get tiring trying to track down short-prints of players I chase. Tulo is one down and about fifty more to go.

I, unfortunately, do not collect Khris Davis, but I do like the Flower Power look of the "New Age Performers" inserts this year. 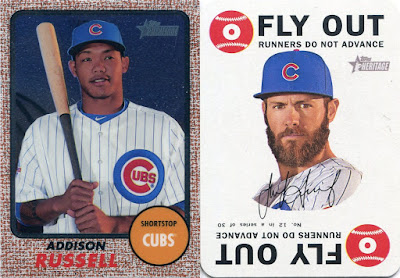 I'll resume my excitement over that once Jake Arrieta is done staring into my soul. 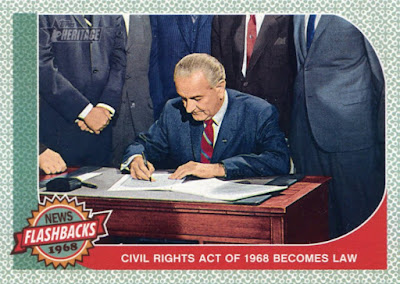 To close on a non-baseball note, here's the first notch in my yearly quest to complete Heritage's "News Flashbacks" insert set.

Like the short-prints, Topps has upped the number of these from ten to fifteen. Unlike the short-prints, I'm happy about that decision because it makes logical sense. I've learned enough about history to know that 1968 was a particularly historic and turbulent time for the world -- and especially America -- so it stands to reason that more events would be documented in this year's Heritage.

All in all, I think 2017 Heritage did exactly what Heritage is supposed to do: faithfully honor a classic Topps design. No matter my feelings for the burlaps, '68 Topps is indeed classic, and this year's Heritage still provides the usual excitement of seeing current players on an old design.

But I think most of us would agree that burlap was best left in the '60s.
Posted by Nick at 5:58 PM

I enjoy the Flashbacks too. History was my favorite subject 'back in the day'. I don't put the set together but do keep Presidents and musicians. I also like the groovy look of the New Age Performers. I'm not buying Heritage this year and look forward to the generosity of my blogger pals to meet my Tigers needs. That might be tough since most of the Tigers are SP!!!

I say Down with the SPs.

Nice post. People either hate the 68 design or love it... and I agree, too many short prints.

The 2nd Series Checklist (which was issued with the 1st AND 2nd Series cards) was made with both border designs. See this page: